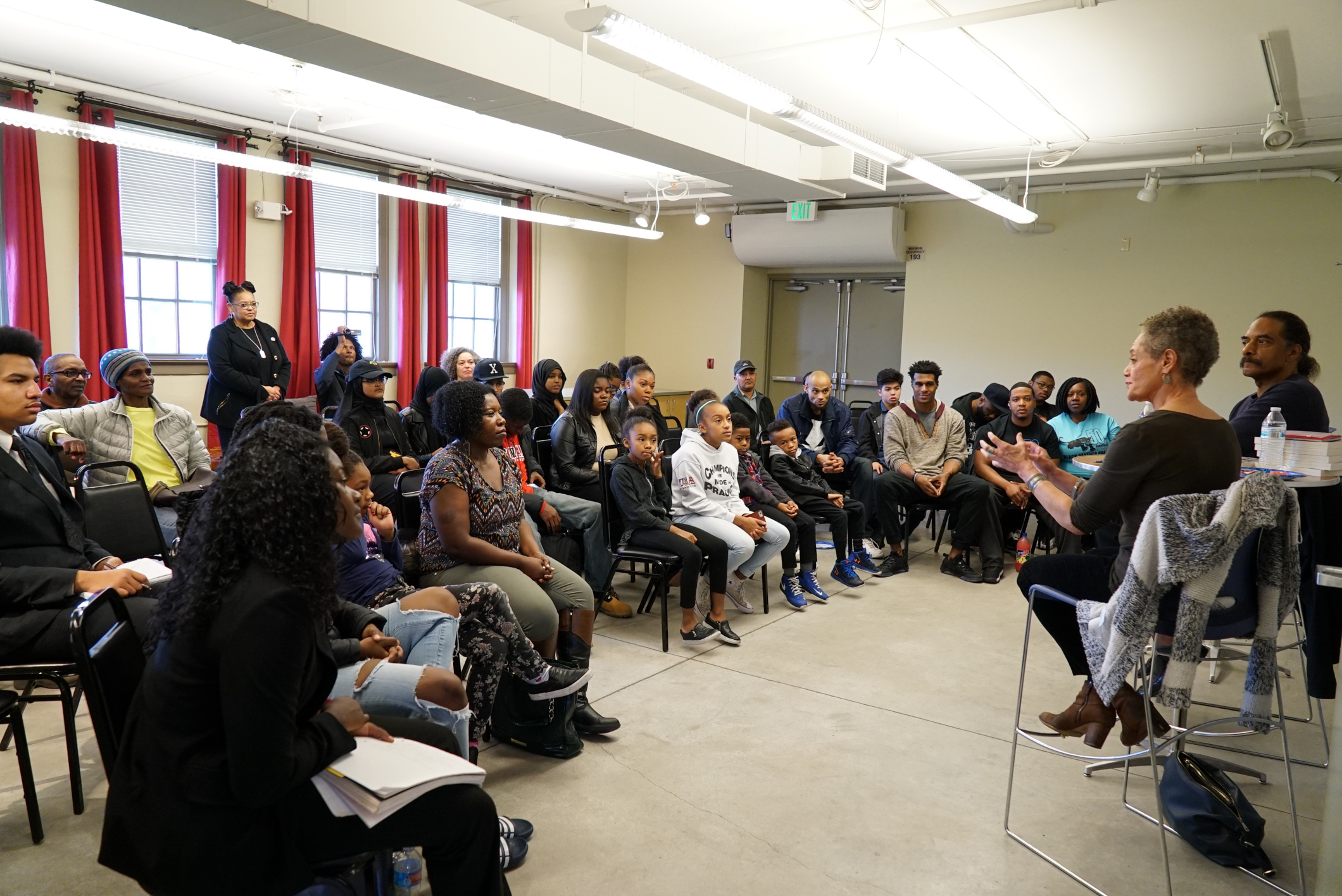 As a room full of young people listened intently inside a room of the Northwest African American Museum (NAAM), former Black Panther Party National Communications Secretary Kathleen Cleaver described growing up in the post war South. “My parents were living in Texas when I was born. My father was working in voting rights in Texas. If you think that’s easy think again.”

After her father began working for the Foreign Service, the family lived abroad in Africa, India, and the Philippines. She remembered, “as a child I got to see a large part of the world where people were brown, but their culture was different, their lives were different. So there was no way, there was absolutely no way, I was ever going to be narrow-minded and think America was the worst or the best. There was also no way I was not going to be able to participate in the struggle because that’s what my parents had done, that’s what people in my generation wanted to do, we really did, we believed we were going to change the world.”

Young people representing Black Student Unions from Garfield, Franklin, Rainier Beach and Cleveland High School, along with representatives from Youth Speaks and students from the University of Washington asked questions and listened to the two Black Panthers reminisce about their days in the party. The conversation ranged from topics like the tactics used by the Panthers to accomplish their goals and the position of women in the Party, to how Barack Obama was elected President.

A man who brought his young son and nephew shared a story of how he once overheard the boys use the “N” word and asked what advice Aaron or Kathleen could give to help them understand the history of the word and the implications of its use in contemporary society, music and culture.

Dixon explained that when he was born, slavery was still fresh in people’s minds. “That word was an oppressive word,” he said. “That word, that “N” word, was used to keep us in a state of mental slavery, and it was used to punish us, it was used to separate us from our families, it was used all through that horrible history of slavery. That’s what they called us. They called us the “N” word. So we have to really be conscious about that. That’s a word of oppression and so for those of us who are conscious we have to begin to educate the young people around us about using that word.”

Both Dixon and Cleaver constantly brought up the importance of educating yourself and others about the struggle. Dixon said, “that’s one thing we were always taught in the party that we were always educating, no matter what we were doing, if we were in jail we were educating the people in jail, if we were on the bus we were educating the people on the bus, if we’re at the grocery store we’re educating people at the grocery store on the corner or wherever it may be. We all have to participate in that, in terms of helping to raise the consciousness of our people and our community.”

One young man, identifying himself as a Garfield senior, wanted to know why the civil rights movement seemed to lose momentum between the height of the Black Panthers and the rise of the Black Lives Matter movement.

He asked why some of the same things the Black Panther Party mentioned in their 10 Point Program (the Party’s goals and guidelines for self-determination that they deemed a “combination of a Bill of Rights and a Declaration of Independence”) were still being fought for 50 years later like number seven in the 10 point plan: “We want an immediate end to POLICE BRUTALITY and MURDER of Black people” or number four, “We want decent housing, fit for shelter of human beings.”

Cleaver replied, “It’s not what went wrong, it was what was done to stop us. Opposition to racism, opposition to white supremacy, opposition to imposed poverty, opposition to bad housing and bad education, all the forms of domination that we were being subjected to that we resisted.”

Referring to the system’s of oppression the Panther party once fought against, Cleaver said, “No. It’s over. The party was able to demonstrate and act on the secret desires of the vast majority of black people.” Eventually, she explained, the FBI, local police departments and government systematically destroyed the Black Panther movement.

Amma Anang, who moved to Seattle in 1978 from Oakland and described herself as being a life-long Black Panther, said “it’s coming back full circle now that the FBI is investigating Black Lives Matter.” She described meeting Aaron Dixon in Seattle after her move and said that although the movement transformed, the original 10 point program continued to be the “script of our lives.”

The conversation between the young people and the Black Panthers lasted more than an hour. The former Panthers continually emphasized the necessity of getting others involved in social justice movements, forming coalitions, constant reading and self-education.

“The Black Panthers are of a generation and that generation are now grandparents,” Cleaver said.

Susan Fried is a Seattle based freelance journalist whose work has appeared in The Seattle Globalist and Skanner newspapers.