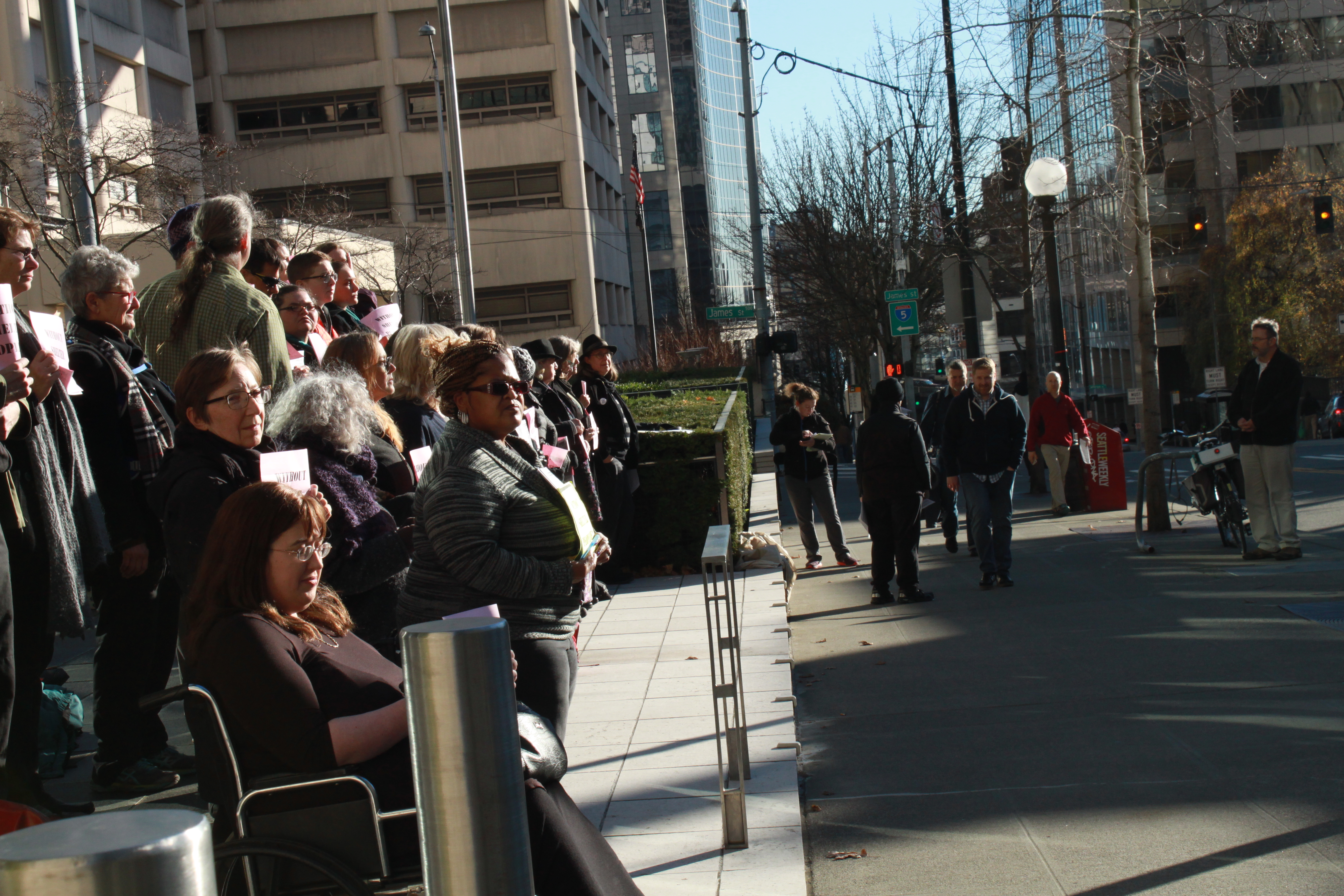 Women in Black, a group created by Seattle Housing and Resource Effort (SHARE)/WHEEL, honor homeless people who have died on the streets. As soon as they find out, a vigil is held about a week later.

After this week’s vigil, the Housing for All Coalition and other homelessness organizations asked new Mayor Jenny Durkan to prevent funding cuts from homelessness programs.

“Sometimes these vigils are the only memorial service friends and family have,” said Anitra Freeman, a member of Women in Black. “Sometimes this is when people find out.”

Homelessness advocates on the edge of the crowd offered fliers to passing pedestrians. They held lists of those who passed away on the streets and what people can do about it.

Most of those passing didn’t even make eye contact. A few shook their heads. One man grumpily said, “I’ve seen this hundreds of times” as he walked by without stopping.

Scott Morrow, one of the people handing out fliers and the head of SHARE, noted the public interaction Wednesday was actually better than most. A few were taking fliers and stopping.

Low-barrier housing, the Women’s Referral Center and the Women’s Wellness Center (both run by Catholic Community Services), the Urban Rest Stop and the Columbia and Martin Courts (run by Low Income Housing Institute), and the Hygiene Center in Pioneer Square (run by Compass Housing Alliance) are among those seeing cuts.

Approximately 300 shelter beds across Seattle are also slated for removal.

“The city of Seattle just blew a hole in the bottom of our lifeboat,” Freeman said. “It has an especially deadly impact on homeless women.”

A 2009 study by Eleanor Lyon and Shannon Lane found that 85 percent of those entering shelters identified “safety for myself” as their reason for seeking services. Moreover, domestic violence, sexual assault, and rape often either prompt homelessness or occur while someone is experiencing it, as reported by Seattle Weekly.

While these varying degrees of abuse are by no means experienced only by any specific category of people, women — especially women of color — and the LGBTQIA+ community experience it disproportionately.

One woman standing vigil explained she left her home to escape domestic violence. At first, Queen B (or Beth) found herself without a home for two months when she first came to Seattle. She decided to return to her abuser. She left a second time in the winter of 2015, returning to Seattle.

Queen B is no longer homeless, and no longer facing domestic violence, but she still attends every Women in Black vigil she can. Even her walker can’t stop her. Queen B holds her sign and makes sure everyone sees it on the buses she rides there. At the last vigil, she knew every person remembered.

“There has been more deaths this year,” Queen B said. So far, King County has seen 88 deaths due to homelessness, nearly matching last year’s total of 91 deaths. “That’s really sad for this really big, rich city.“

When she was homeless, someone told her she didn’t look like it. Tears streamed down from behind her dark transition lenses as she spoke to me. Queen B then asked what homeless looks like. She was homeless for eight months.

“I used to be outside singing songs and crying because I thought I was going to die out here,” Queen B said. “And who was going to know if I did?”

Freeman also discussed her time living unsheltered, born out of her experience with depression. She was homeless in 1995 when, she says, the proportion of needs to services were much closer than what they are now. “I had been homeless off and on all my life,” Freeman said. “I call couchsurfing ‘homeless in denial.’”

Now Freeman is in a much more stable situation. She feels the services around Seattle with the most impact are the ones involving homeless people themselves. Across the board, Freeman feels nonprofit organizations, churches, and the city have improved through more cooperation.

Without cooperation, she said, “they’re just pitting people against each other, fighting over money.”

Seattle’s aid services now have to bid for funds. Following the 2016 Barbara Poppe report, the first step for Seattle was to “eliminat[e] homelessness assistance funding for low and moderately performing [temporary housing] projects, reallocating these savings to more effective approaches” and then “The City of Seattle must shift to a competitive and performance-based contracting approach.”

In tandem with the report, Focus Strategies used a System Wide Analytics and Projection (SWAP) tool to determine how Seattle’s many homeless services performed. The performance primarily relied on their success rate of putting people in permanent housing. This metric, however, gets criticism by aid and housing advocates because they feel Seattle isn’t keeping up with the need for affordable housing.

“It is completely disingenuous to be eliminating shelter beds at a time when both temporary shelter solutions and permanent affordable housing have failed to keep up with the escalating problem of homelessness,” Seattle City Councilmember Kshama Sawant said Wednesday. “My office has spoken to many homeless individuals who were placed in apartments they knew they couldn’t afford with limited-time vouchers, only to become homeless again when those vouchers inevitably expired.”

As the Women in Black, SHARE/WHEEL and the Housing for All Coalition went to the Mayor’s office, they passed in front of her escort car. Durkan rolled down the window and a few feared she wouldn’t be in the building and began saying “we have a letter for you!” Her car did, however, pull into the garage of City Hall. The Mayor would later never see the activists when they asked for her — she and Councilmembers were in meetings. Instead, Deputy Mayor Shefali Ranganathan did.

“[Durkan] is paying attention to this and I will read this,” Ranganathan said. “Like I said, give us a little room.”

Someone in the crowd answered, “people are dying.”

“I know and I want to underscore how seriously the Mayor takes this,” Ranganathan replied.

Michele Marchand with SHARE/WHEEL pointed out Durkan committed to adding 700 shelter beds during her campaign run.

Buried in the crowd sat a stroller with a cat inside. Its name is Gloria and she “stood for every pet who lost their human,” according to her owner.

Those who died in Washington this month from homelessness are below:

A full list of those who have died from homelessness for King County this year is listed here.