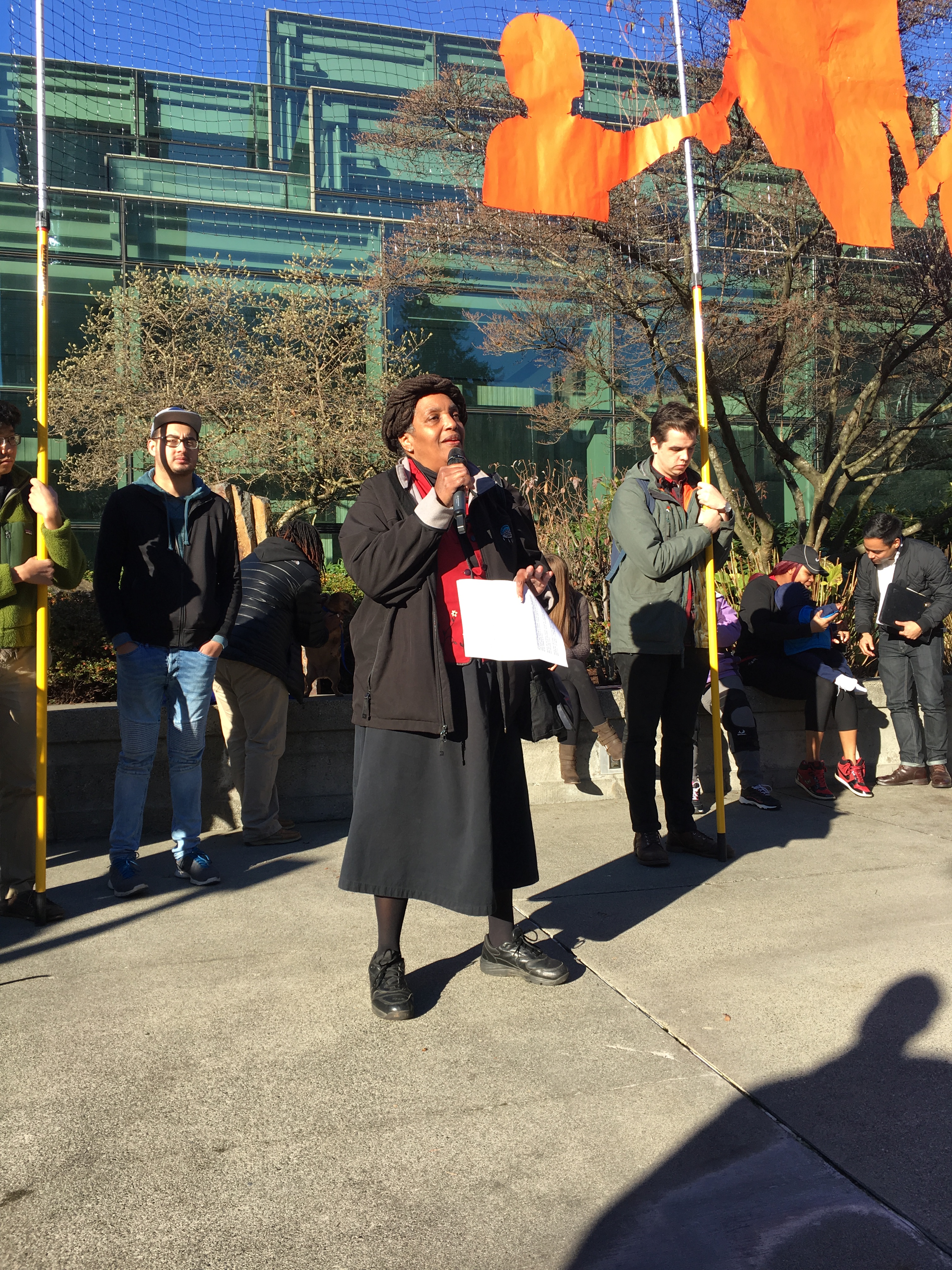 On alternating Wednesdays, a group of community members gather in a converted church. A young woman named Hodan Hassan facilitates the assembly. With Bahn Mi or pizza and sometimes children playing in the recesses, the meetings take on the air of a carnival. Yet the topic of discussion remains dire.

A woman named Esther “Little Dove” John is why Hassan is here. A community activist, artist, and retired psychology professor, John moved to North Beacon Hill in 2005 after a rent increase pushed her from her previous apartment. Now, with a developer planning to tear down her current apartment building, she is being forced to face the Seattle rental market again.

Hassan, a climate justice organizer with Got Green, readily jokes with others in attendance, but quickly adopts an approach aimed at the jugular when the topic turns to political organizing. She can swing from a discussion of Marvel super heroes into points of attack for taking on the patriarchy, systemic racism, and the climate crisis. Most of all, she is direct. “The disappearance of people of color from Seattle is a representation of development without regard for human life,” she says.

Got Green, a people of color-led environmental justice organization based out of South Seattle, has organized the campaign so far. As the meetings progress, additional newcomers arrive, eventually breaking into small groups where members can give voice to their concerns about displacement in the community. Hassan sits in on groups, eagerly banging away at the keys of a laptop to capture ideas.

Hassan said she noticed her neighborhood in Rainier Valley began to change shortly after the light rail opened. She was attending high school at the time, and she felt safe and comfortable in the neighborhood. She described how the handful of white people getting off at her stop seemed to grow exponentially. “I started to notice the ‘beautification’ of a neighborhood meant that people of color were moving out.” Since 2007, she said a large number of black people have left her neighborhood.

Hassan became aware of John’s situation from a circulating petition for a public meeting. She met John a few weeks later at an organizing meeting where members of Got Green decided to support John’s cause.

Got Green members knocked on doors and made campaign phone calls to build community interest in a public forum facilitated by the Seattle Department of Construction & Inspections. Dozens of residents spoke out at the October 25th meeting at the Jefferson Community Center in support of John.

John resides in a 1953 apartment building consisting of four units, each with two bedrooms and a bath. Decades since the last renovation, it is in need of repair.

One day in May John returned home to find a note on her door from her landlord saying he had sold the building. Speaking with neighbors, she was able to find out her home was slated for demolition. Soon after, yard signs went up announcing the development and the public comment period.

Last year, the development company Build Urban LLC purchased the building. In October, the company submitted plans to build a four-story building with 42 Small Efficiency Dwelling Units or SEDUs. The small studios initially cost more per square foot to build and are typically rented for lower amounts than traditional apartments. However, once the construction is paid off, developers are left with the highest price per square foot rental property type.

John now faces the prospect of waiting in lines for low-income housing in the area. According to the Beacon Hill elder, the first wave of higher-income newcomers arrived in 2007, accompanied by new construction focused on adding smaller units. In the future, she worries such development strategies will push families with children out of the community.

“Beacon Hill historically was where Asian and Pacific Islander Americans could find affordable homes in Seattle,” she said. “Also, with redlining and community covenants, it was, along with the Central District and the Rainier Valley, where communities of color were allowed to set down roots. As a result, Beacon Hill, along with the Rainier Valley, is home to people speaking over 50 different languages and it has been affordable to people of color.”

Echoing Got Green’s call, John said, “Let’s have a moratorium on development until we can figure out how to keep Seattle diverse as we welcome newcomers.”

The owner and president of Build Urban is Edson Gallaudet III, a distant relative of Thomas Hopkins Gallaudet and Edward Miner Gallaudet, who played key roles in the formation of the first higher education school focused on the education of deaf people. The current embodiment, Gallaudet University, operates as a private university in Washington D.C.

Gallaudet and his father Edson Gallaudet II, have owned at least seven development companies in Seattle. Gallaudet and his wife Julie declared bankruptcy in 2012 resulting in foreclosure on one of their properties in the central district. The current embodiment of Gallaudet’s operations, Build Urban, has abysmal online reviews with clients citing poor build quality and warranty defaults and neighbors claiming property damage and blocked roadways.

Build Urban’s registered address is an unmarked single room in a Fremont shared office. Gallaudet failed to respond when contacted by the South Seattle Emerald.

John says Build Urban has yet to contact her.

James Williams, the Organizing Director of Got Green, framed John’s struggle within the wider Seattle housing scene, saying “There’s a great disconnect between a lot of progressive people who say they’re well-meaning in Seattle and the actual effects of this growth.”

He explained, “Dove is special in that she knows so many people. She’s part of a lot of networks. Dove has lived her life in such a way that people who know her have a great deal of respect for her and would do almost anything they can to help her to bring attention to what she’s going through. She has a megaphone just from her reputation and the life she led. She can bring attention to this disconnect.”

He stressed growth doesn’t have to end in displacement. With enough people involved, he hopes they can stop Dove and other like her being, “thrown away and left somewhere in South King County that they do not recognize, that does not recognize them.” In the end, Williams emphasized the need for, “a more systemic change to change what growth means in Seattle.”

Some members of the city council have engaged with the issue. Councilmembers Kshama Sawant and Kirsten Harris-Talley co-authored a statement with many others regarding Dove’s displacement. Hassan is planning more community action meetings and Got Green will be facilitating a workshop at the Martin Luther King Jr. rally in January.

Williams admitted, “We’re figuring it out as we go,” but went on to add, “The reason that gentrification moves forward as fast as it does is because people kind of feel like the battle is already lost. Everybody’s just waiting to be displaced. Dove gives us a great example that we can fight back.”

As John awaits eviction, she maintains hope for a resolution. “Let’s sit down together— developers and communities—to talk about what our needs are,” she said. “Let’s strive to meet all of our needs, not just the need to make a profit.”

Will Sweger is a contributor at the South Seattle Emerald and a resident of Beacon Hill. His work has appeared in Seattle Weekly, Curbed Seattle and Borgen Magazine. Find him on Twitter @willsweger