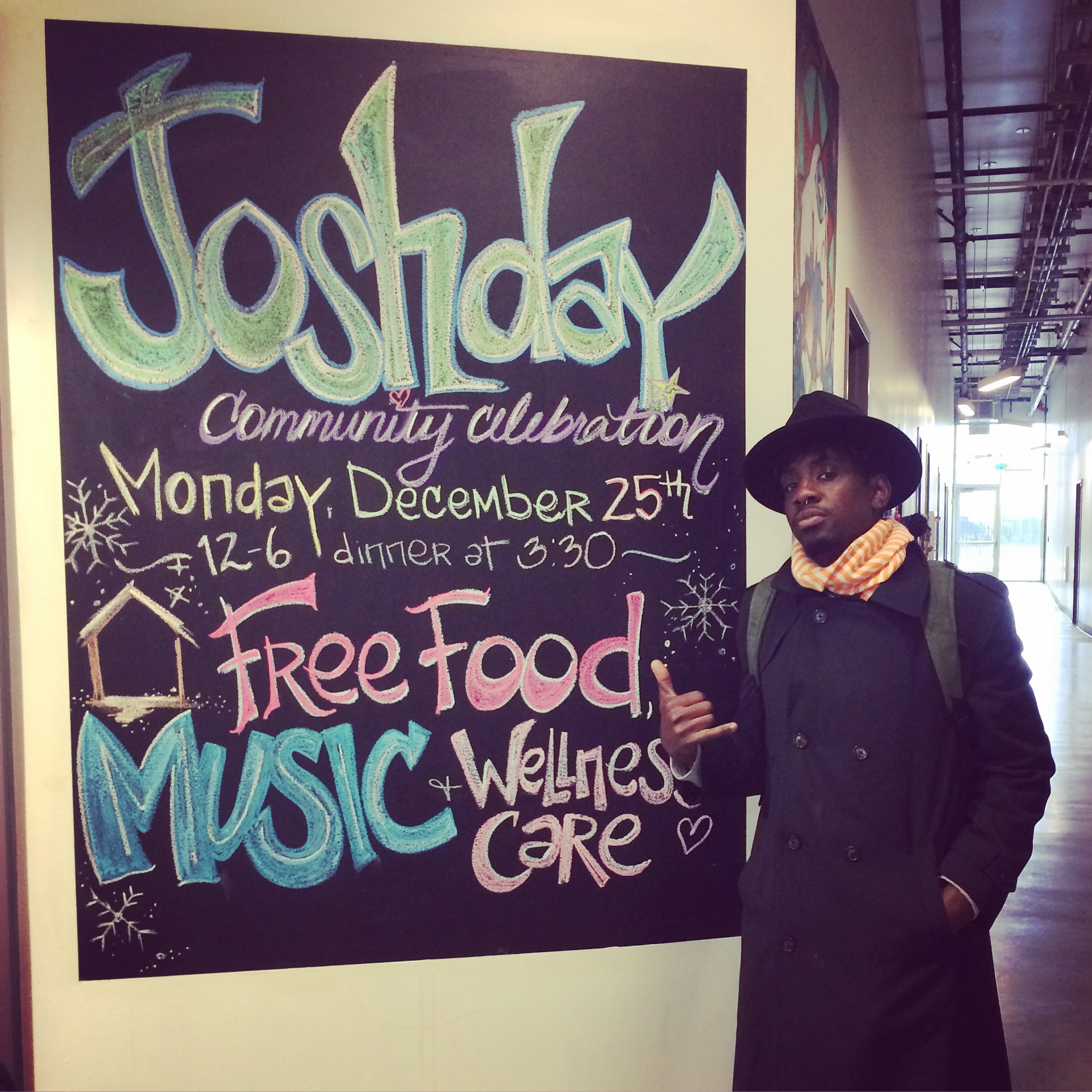 Last year saw the first annual “Josh Day”, a Christmas feed that focused on feeding the house-less community in South Seattle on Christmas day. Inspired by local artist Jamil Suleman’s “Jesus in Seattle” performance art piece, the grassroots community group known as #TEAMMeek sprang up to throw a celebration inspired by the teachings of Jesus.

“When I put on the Jesus robe as a form of social justice performance art, I didn’t really understand what I was getting myself into. I was forced to really inspect the life of Jesus and what he represented. I found out his name was most probably “Yeshua”, which would be translated as “Joshua” today (or Josh for short). When I began to really understand Josh’s work, I realized that it comes down to simply giving.” says Suleman.

This year, the grassroots group is working alongside Chef Tarik Abdullah of Black & Tan Hall as part of his city wide “feed the people” campaign. For Josh Day, Tarik looks to call on Seattle’s local culinary community as part of a “Chef Challenge”. Chef’s are being asked across the city to donate one hotel pan of their favorite meal to Josh Day by noon on Christmas Day at the MT. Baker Artist Lofts Community Room.

“I’m calling out all my kitchen homies. Donate one hotel size pan to Josh Day and feed the people”, says Tarik in his viral video “the first five chefs will get a feed the people hoodie”. Chef Tarik hopes to spread the “feed the people” movement throughout Seattle and beyond in 2018, with Josh Day being the kick off.

The Chef Challenge asks participants to cook one serving and deliver it to the event on Christmas morning at the MT. Baker Artist Lofts. Interested Chefs or local cooks can email JoshDay206@gmail.com to confirm.

So far, the group has raised over a thousand dollars, and has donation bins known as “joshboxes” all over the city. Below is one from The Station Cafe in Beacon Hill.

The event will take place on Monday, December 25th on Christmas Day from noon to 6pm at the MT. Baker Artist Lofts Community Room located at: 2915 Rainier Ave S. Seattle, WA 98144. The event is free and open to the public, with music and entertainment from Nikkita Oliver, Brett Hamil, Peace & Red Velvet, Julie C of the ACED, CALL, The Raging Grannies, and Santa.

Here are what some of the organizers have to say about being a part of Josh Day:

“The best Christmas I ever had, period.” – Ma Bell, Local nutritionist, healer, and organizer of Josh Day.

“It really is a gift to be part of such a joyous, grassroots effort to do something positive after a year like this last one. The fact that we are all sitting down together, unhoused and housed, folks who grew up here and folks who just moved here, is a really important aspect of recognizing ourselves as a community.  It’s so very simple: gather together, let folks shine and feed the people.” – Meghan Trainor, local artist and digital strategist, grew up in South Seattle and considers Josh Day the highlight of her year.

“It is such a great feeling to be able to give our community the gift of love, food, and clothing on JOSHday.  The excitement  continues to grow with each planning potluck we’ve hosted. I know JOSHday will be over flowing with the spirit of Josh!” – Amber Fowler, Local costume Queen and organizer of Josh Day.

#TEAMMeek is a grassroots community organizing group based in South Seattle that connects every Christmas to feed the people during the holidays with food, entertainment, and community love. E-mail JoshDay206@Gmail.com for more information.