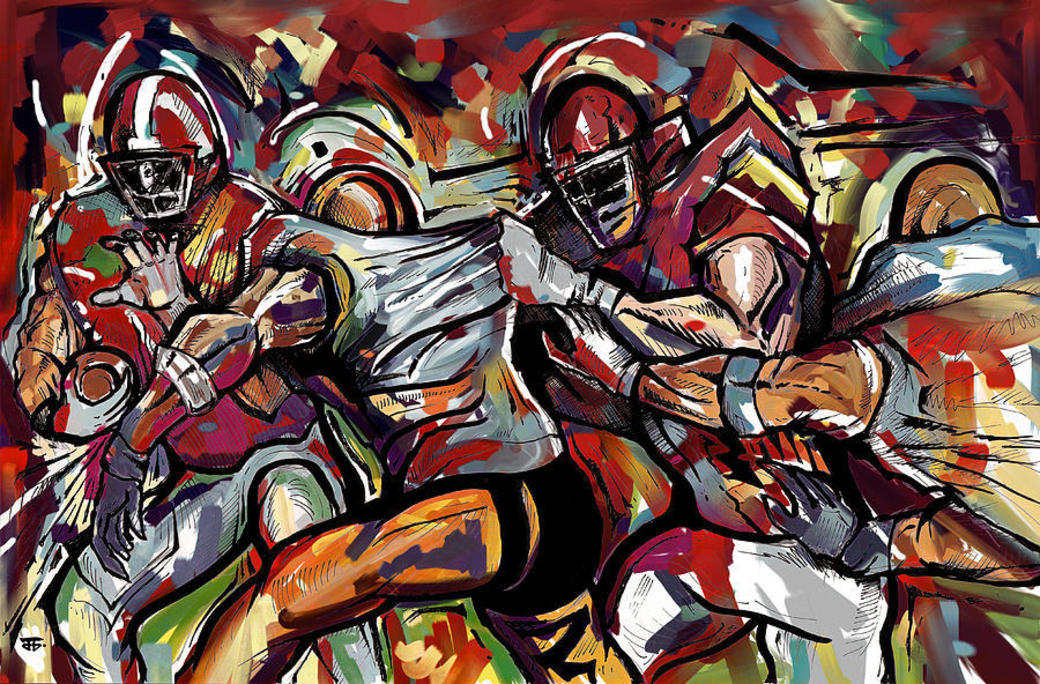 I am not a football expert, but when the Emerald asked me to write about the Bills/Jaguars playoff game in light of the Seahawks missing the playoffs for the first time in five seasons I agreed, because one of my resolutions this year is to write more about things outside of my area of expertise, things people are actually excited about, things other than the maddening minutia of local Seattle politics.

They wanted a piece about the “comically inept Bills” (their words) who somehow managed to advance to the playoffs with the same mediocre record as the Seahawks (9–7). I met up with some other Emeraldians at Rookies, a clean, spacious sports bar in Columbia City.

The first thing you do when you’re a totally uninformed fair-weather Seahawks fan sitting down to watch a non-Seattle game for the first time this season is to pick a team to root for. I weighed the evidence for and against both teams. For starters, Buffalo barely squeaked into the playoffs while the Jaguars won the AFC South. I almost always go for the underdog—as my win percentage in the past couple city council elections would attest—which put the Bills in good stead. They haven’t been to the playoffs in 17 years.

As a pointy-headed leftist non-sports fan, I must also weigh the merits of both cities on ideological terms. Jacksonville and Buffalo are two of the most segregated cities with the highest rates of violent crime in the country, but Buffalo is also one of the most economically depressed while Jacksonville is on the come-up. Jacksonville is one of those sprawling suburban-ish Southern metropolises with a hot housing market and low wages, a showpiece for the paper-thin fantasy of neoliberal economics. Buffalo is an old-school train wreck Rust Belt city that’s been in decline for decades (another underdog point for the Bills).

Also in the Bills’ favor was the fact that they’ve got former Seahawk Steven Hauschka, who was replaced by the guy who destroyed our playoff chances, Blair Walsh. If the game came down to a Hauschka field goal, then wouldn’t we, by extension, also share a piece of that victory? Every Twelfth Man fan I talked to was supporting the Bills for this reason. Also, the Jags beat the Seahawks in a hard-fought game last December in which Quinton Jefferson tried to climb into the stands after Jags fans pelted him with beer and reportedly shouted the n-word. As a former North Floridian who is familiar with Jacksonville racism, I can believe it. I generally root against all Florida and Texas teams on principle anyway, a holdover from the George W/Jeb Bush era and a sign of my Southern self-loathing.

The only thing that would make me reconsider rooting for the extremely underdog Bills is their fans. They call themselves “Bills Mafia,” perhaps the least creative crew name in the NFL. Today I learned that one of their tailgate party traditions is the “table smash,” in which people bodyslam tables to break them. Seriously, it’s a thing, and it’s possibly the dumbest local sports ritual I’ve ever seen. They even light the tables on fire sometimes. Still, it makes sense: When you lose that much for that long in a city so hapless, you gotta blow off some steam somehow.

Emerald contributor Rachel Eagan, a Buffalonian, said, “Only a quarter of being a Bills fan is about football. It’s mostly about supporting anything that comes out of there!” Eagan also informed me of another truly horrifying Bills Mafia tailgate tradition in which someone takes a shot of beer, then spits it into the next person’s mouth, on and on in a circle. For the love of God, please give these poor maniacs a playoff win!

On to the game: it was boring as hell. Hauschka got an early field goal to the cheers of the ten or so people watching the game (minus two Jags fans at the bar). Literally, nothing else happened, other than a flashy interception by the Jaguars’ Jalen Ramsey that sealed it. Near the end of the game the Bills’ Tyrod Taylor had his head slammed into the ground on a hard tackle and was placed on concussion protocol, reminding me of another reason I don’t watch a lot of football. A bunch of dudes having their brains pounded into Gorgonzola cheese for the financial benefit of a supervillain syndicate of billionaires.

It was a suitably depressing end to a monotonous slog of a game. The Bills lost, 10-3. There were no vicarious thrills to be had for the fair-weather Seahawks fan, other than that one field goal. As we drained our mimosas and got ready to leave, a fellow Emeraldian said, “I guess there’s not really much of a story there, huh?” And maybe he was right. Honestly, I would’ve been more entertained watching “Bills Mafia table smash” videos, which is what I’m doing now.

The #BillsMafia gif I never knew I needed pic.twitter.com/pNISRDoDoM