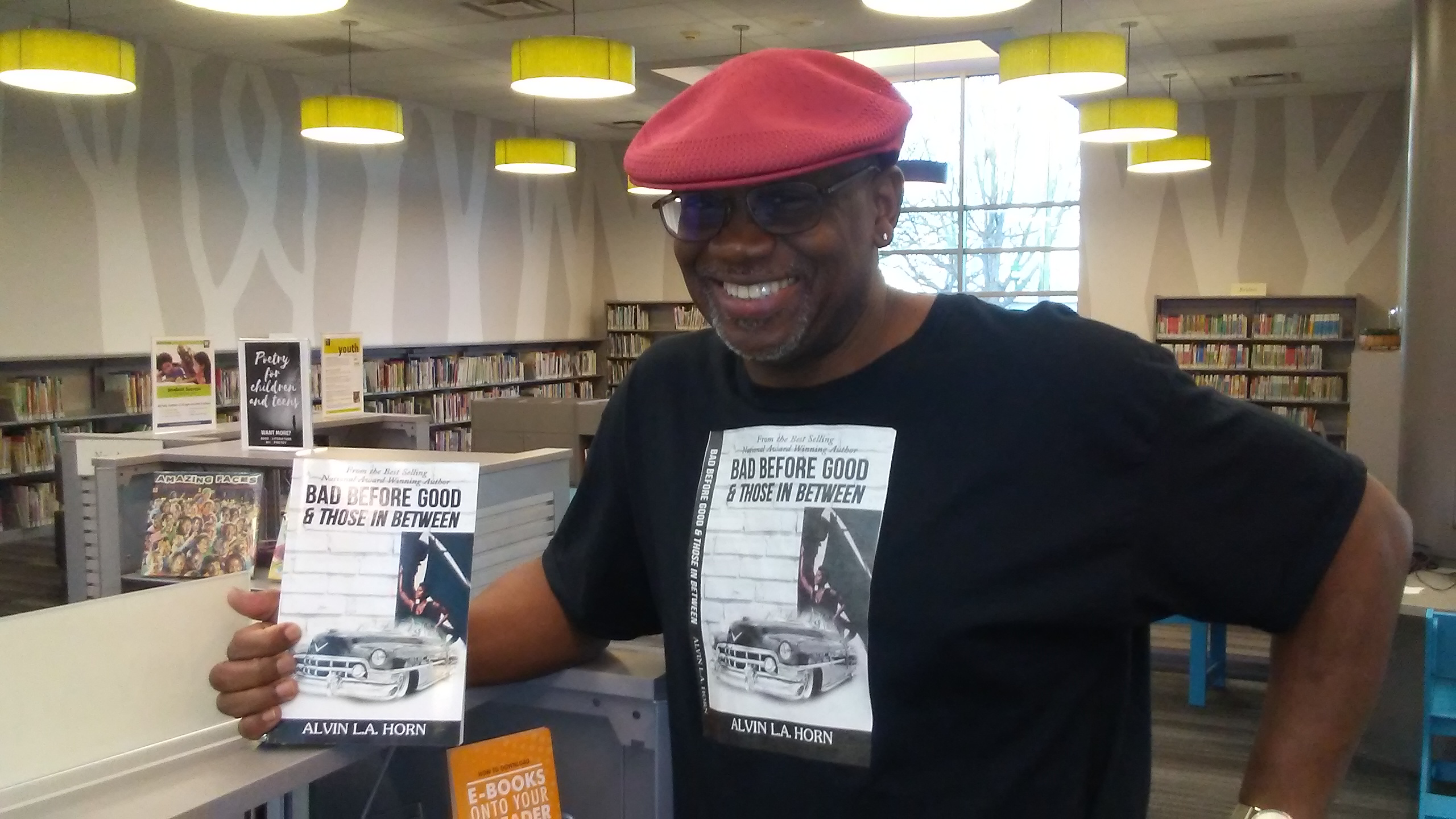 If “Let’s Get It On” era Marvin Gaye had traded in his tenor for a pen, he’d probably craft novels similar to the South End’s Alvin “LA” Horn.

Horn’s “grown and sexy” novels written for those either “in love or out of it” are also threaded together with Seattle, specifically its South End, as their backdrop.

The Emerald spoke to the author about how South Seattle functions as a muse for his work, and his latest novel, Bad Before Good & Those In Between, which he’ll be reading from at Seward Park’s Third Place Books on January 15, at 7pm.

The novel follows Zelda Harjo as she navigates the pitfalls of uncertain romances, the heartbreak of departed family members, and the question of: How do we accept doing wrong sometimes in order to make things right in life?

Bad Before Good & Those In Between, like many of your other books, deals with themes of love and fulfillment, why do you seem to continuously come back to those themes?

Love is like a rainbow and different kinds of jazz. It comes in different tempos, variations, and hues. All our lives, in each one of us, we hear and see it differently. That’s why I write love from many different angles as all of our love lives are so very unique. I try to bring to light all the many ways we run from or run to love.

Without giving too much away, your latest novel follows a young Black and Native American woman named Zelda as she navigates a chaotic life, love, and self-worth in the Pacific Northwest. I know this is a work of fiction but is she based on anyone in particular, and how do you think people will resonate with her as a protagonist? When we first meet her she is trying to tame this uncontrollable whirlwind called life and carve out a little happiness?

Zelda is a composite of many people. She’s street tough but not a bully, not a criminal in the truest sense. She is a hustler, though, trying to do the right thing for others, but somehow she gets paid by the wrongdoers. She’s the prototypical example of someone burdened by low wages, and living paycheck to paycheck. She’s cautious of what the next day might bring, and whatever money she does make is never quite enough to do anything but survive.

But she’s also in search of a love that fits her soul; she has a spiritual sense that’s a mixture of cultures – Black and Native American- giving her a unique outlook on life. Zelda is also from a family with secrets. All our families have hidden stories, but some run earthly deep, and that spawns lies and hurt and sometimes brings people out of the dark into our life.

Why did you write Bad Before Good & Those In Between?

Many of us had little money at one time or might have come through a stressful childhood, and because of that we never understood how bad some of our decisions were. As we matured we understood that we had much to learn and experience before we could achieve and enjoy the good in our lives. Zelda gets told this by her step-father, who she’s also taking care of as he battles dementia. He makes no sense many times, but she soon learns he makes a lot more sense than she gave him credit for, sometimes.

What did writing this book further teach you about love, relationships, and life – especially in this case as you’re writing from the perspective of a Black and Native Woman?

I didn’t feel that having the main character be a woman was a challenge for me as each of my previous books had women protagonist and their voices have played well from the reviews. I also have a great female editor, who screamed, “what are you thinking…like a man, I see!” I learned a lot by talking to women and getting their perspectives on life and their feelings of struggle and survival growing older. Many times, men can only observe and never fully grasp a woman’s struggle until we see her joy and pain exposed to us from her soul with no filter. Often, men run from strong women out of an internal fear. We’d rather run from a relationship than try to understand a woman’s perspective, discounting her feelings along the way.

I’m assuming you mined your own relationships pretty heavily in crafting this book?

I did a great deal of homework and observing. It’s what a good writer does in their daily life, and should allow a writer to flow between writing from the perspective of different sexes, at least for me. I have been raised by women and experienced their lives as both women and human beings, with different voices and trains of thought.

This book, like others, really captures the essence of Seattle’s black community; you hear the music, taste the food, re-live familiar conversations. Why is that so important to incorporate into your fiction?

Seattle has a liberal persona on the surface that makes Black people here have to weave between being Black and also being ‘multi language-able’ if I may make up a word. Meaning to say, Blacks here in the Northwest learn to speak several races and economic classes. We know others’ lifestyles and culture but the Northwest does not really know us. Black people must bend, and curve, and be straight on command to blend and thrive here. We do it well, often not only with other races but within our own race. There is a character in the book- he resembles one race and is treated as such. But the reader never fully knows. I keep you wondering.

Seattle itself serves as a character in this novel, very similar to how the city of Baltimore does in David Simon’s acclaimed television series The Wire. What is it about this city- especially it’s South End- that captures a writer’s mind enough to integrate it into a story?

The 98118 is reported to be one of the most diverse zip codes in America. How can I as a writer not use this richly cultured background? The people here are the books I write as we blend, read, work and pass by each other wondering sometimes: what is the story of the person who just drove by me and said hello, or was rude to me? Our housing can be an apartment next to a gentrified condo or an old house next to a mini-mansion.

Here’s a passage from the book that serves as an example:

“Mid-day, I walk into the 4 Corners Boxing Fitness Club which sits on the Rainier Beach area lakefront that’s on the south end of Lake Washington on a park’s edge. Boats line the waterfront condo area of the most diverse zip code in the United States. High and low incomes dance in the same streets of drive-by shootings and muggings, along with Starbucks and libraries. Schools and mortuaries could be prisons by the configurations, and you can clearly see it driving in from every direction. It’s the urban revitalization that will predictably supplant the occupying demographic in the area.

Old rundown buildings of revolving door businesses from nail shops to barbecue joints, and fast-food, line the hood. White women push baby strollers and wait for buses right along with “Boyz in the Hood,” with their pants well-below their butts. A general street code – a safe zone of, don’t mess with regular citizens, works out a psychology line of, I’ll stay in my lane, most of the time. Of course, a car is not a person, and a house without a security alarm is not a person, so they both are fair game. “

When you write about sex, it must fit where it would fit naturally in life. You can’t just write about sex for the sake of writing about it. I want a reader to slip into a scene before they know they are there. Sex itself is more than an act; it is a scent, a bead of sweat. It is shadows and music and a dance of two people. Sex is a daydream that no one can say they don’t have, and sex is a kiss… an embrace- at least I write it to be before anyone is naked. When I do write, I will make you see it, and feel it, but never let it overwhelm the story.

Why should an on the fence reader pick up your book?

This is a tough one for any writer, so I’ll go with the fact that I’ve been reviewed as one of the top writers in the US, and for sure within the Northwest. Locally, people have made me the writer they want to pick up when they need a thrill. I work hard at my craft and aim to immerse readers in words that take them on a journey that won’t soon forget.