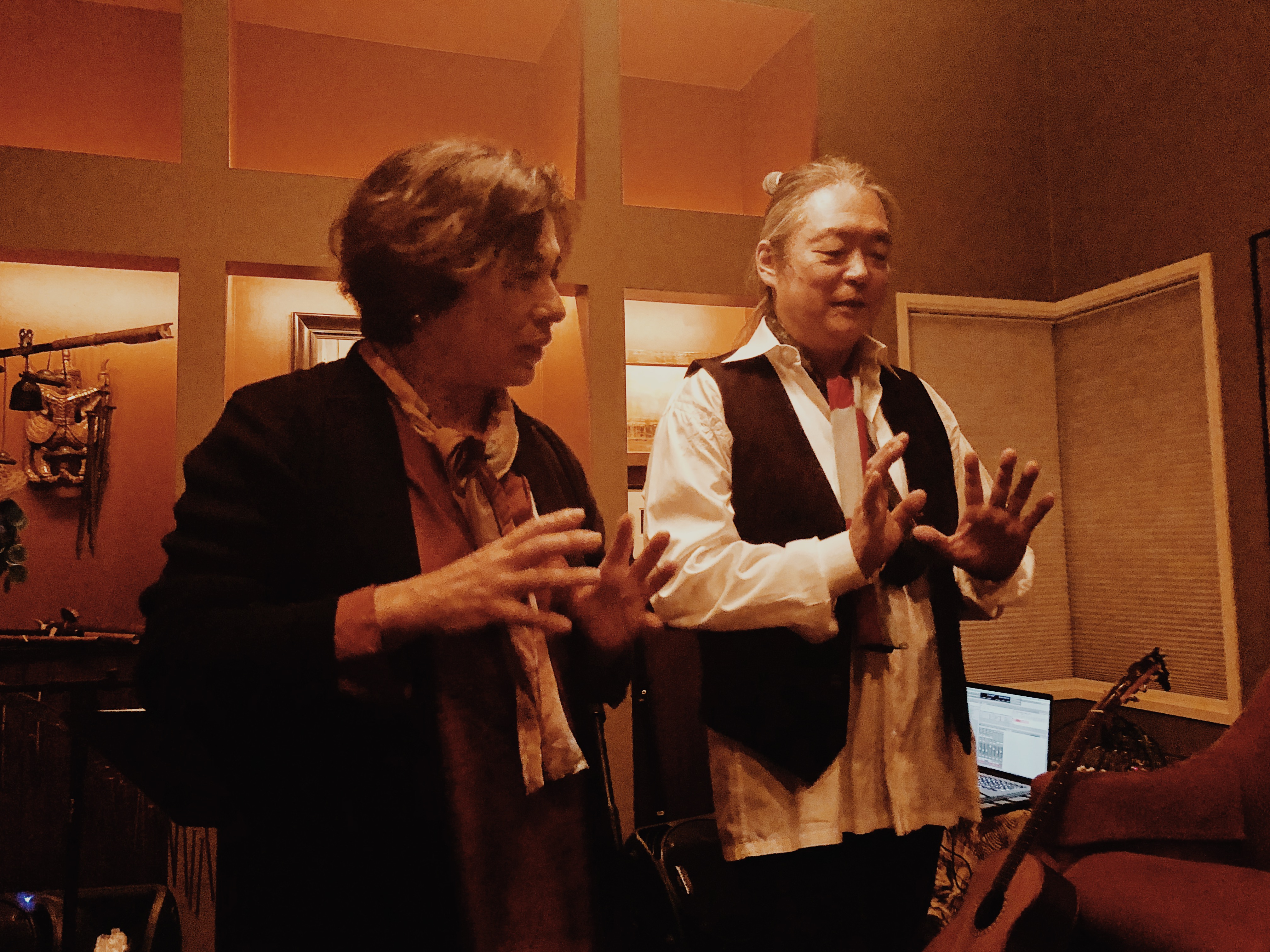 Do you believe in the magic of creative connection? I do. Here’s a story about the gift of such a connection I experienced in South Seattle during the final hours of 2017.

At the end of last year, my wife Nancy and I attended a house concert hosted by our friends Allan and John featuring the work of Japanese composer, musician, and artist Naoki Tate.

Allan had told me about his friends Naoki and Erina in Tokyo, saying how much I’d like them, and vice-versa. I knew them as “Keita’s parents” – their son is in college in Seattle, and I’d met Keita via Allan and John a couple of times over the previous months. Erina and Naoki were staying with Allan and John at their house, which is just a block away from us in South Seattle.

There were thirty or so people at the concert, and we milled around in the kitchen before the music began, introducing ourselves with the help of champagne, snacks, and name tags. Our hosts presented Nancy and me to Naoki, and we smiled broadly, but shyly. Erina and I immediately hugged each other upon meeting.

As we talked, I felt as though I’d known them both for many years. Naoki is an internationally accomplished composer and he was going to play a private concert for us that night. He doesn’t speak much English, so Erina translated for him most beautifully – sharing his thoughts about sound, music, the earth. Her hands gestured as his hands, her face beamed and grimaced as his face did.

My friend Allan introduced Naoki to the small crowd before the concert began, talking about their friendship. “Naoki taught me how to hear,” he said. I love my friend Allan. His words made me determined to listen fully, deeply.

Erina and Naoki talked about his process, how he explores sounds and creates soundscapes using voice, ethnic instruments such as flutes, and everyday objects – like rail spikes and packing material. His setup that night included both items and many others, all strung along a percussion arm. He also had several large wooden flutes, hand drums, multiple effects pedals, an acoustic guitar, a laptop, and a few microphones. Naoki talked about his use of “droning” – sustained sound that establishes a tonal base for the rest of a musical composition.

The music he played for us that night is hard to describe, but I’ll try. In one of the first pieces, Naoki began with a low vibration I could feel in my chest. Then he layered sounds atop the base: a Native American flute, his voice, clacking wood sticks, the sounds echoing and mingling, phrases gently dancing. I found myself with my eyes softly focused, palms cupped in my lap, receiving the music, letting the river of sound flow through me.

After a short intermission, Naoki shared more music. The last songs were more intimate and featured his vocals; his voice suffused with such a longing that I wept unashamedly at the beauty.

Naoki, Erina and I talked animatedly after the concert. I wanted to know about the tools and tech he was using to create his music – the effects pedals, the MIDI controller, and looping software. I told him about my Yamaha S80 synthesizer I had in my basement, saying I liked it, but I preferred the real piano I had upstairs, also a Yamaha. Then we talked about how the concept of white space or rests in his music, his face flushed post-performance. I told him I was in awe of his work, and so grateful I had the chance to hear him in such a small setting.

The next day, Allan called me mid-morning. Erina and Naoki had a gift for Nancy and me – could they come over in a bit, say a half hour? Naoki wanted to see all my toys, meaning my musical gear. Of course, I told him. Then Nancy and I ran around like freaks — clearing counter tops, emptying the trash, vacuuming up rolling tufts of pet hair. “But we don’t have anything for them!” I said to Nancy as I ran downstairs. I uncovered the synthesizer and plugged it into my keyboard amp. I hadn’t been playing it much, some of the keys didn’t sound right. I ran back upstairs where we greeted the group: Erina and Naoki, Keita, Allan, and John.

“There’s a lot of love in this house,” Erina told Nancy as she walked through our front hallway lined with photos of friends, family, and Nancy and I through the years. I offered tea. Erina brought out two small square boxes, Japanese characters on the front. Inside were the gifts for Nancy and me — exquisite black teacups featuring the fierce mask of a Kabuki player. We loved them and told her and Naoki so.

After a failed attempt at getting my synthesizer to work in the basement, we headed upstairs to the upright piano – a used Yamaha studio I bought a little over two years ago. It’s black and shiny and has a great tone, even though I hadn’t had it tuned since I bought it. No matter. All of us crammed into the little room we call a library because it has two bookshelves and a fireplace, along with the piano. Nancy brought out green tea. Naoki sat on our small love seat and took out his bag with flutes and sticks. I didn’t give myself time to think. I sat down at the piano and began playing, just breaking up and repeating simple chords in 6/8 time: C, G, F, Am. Keita sat on the fireplace hearth just off the floor. Naoki took out a flute and played along, effortlessly following my simple chord changes. Keita began gently rocking to the music. I let myself listen and play at the same time. My back was to Naoki, but I could feel the music as we wove our sounds into a single melody.

Then our spastic but loving rescue dog Noodge began howling at the sound of the flute. “She’s singing!” said Erina, and we all laughed. Noodge’s barking got louder. Nancy took her to the basement so Naoki and I could hear ourselves. After a few minutes, she was still howling, so we stopped. We let Noodge back upstairs, and with the flute silent, she stopped barking and resumed sniffing everyone. I invited Keita to play for us – he’s a classically trained pianist and has played on some of his father’s recordings. We listened as Keita played – a classical piece gentle and lilting, then thunderously spiraling, ending with a soft whisper of the keys. We clapped and cheered.

There are no photos or recordings of our mini-concert, no one had their phone out. We just wanted to be together, talking to each other through music.

Then it was time for the group to go — it was a cold but sunny day. They were going to walk to the co-op for groceries. Erina and I exchanged email info, we all hugged, and we sent them off on the last bright day of 2017 with hope and love.

That was the magic of creative connection, my friends. I share this with you as a plea: In this new year, let’s get out from behind our screens and see each other. Let’s sing and dance and paint and draw and tell jokes and stories and play music and share photos. Let’s push back the darkness with the light of our shared creations and together, make magic.

Sandra LeDuc is a writer, editor, and occasional musician. She’s lived in South Seattle for 17 years with her wife Nancy and is grateful to call the 98118 home.