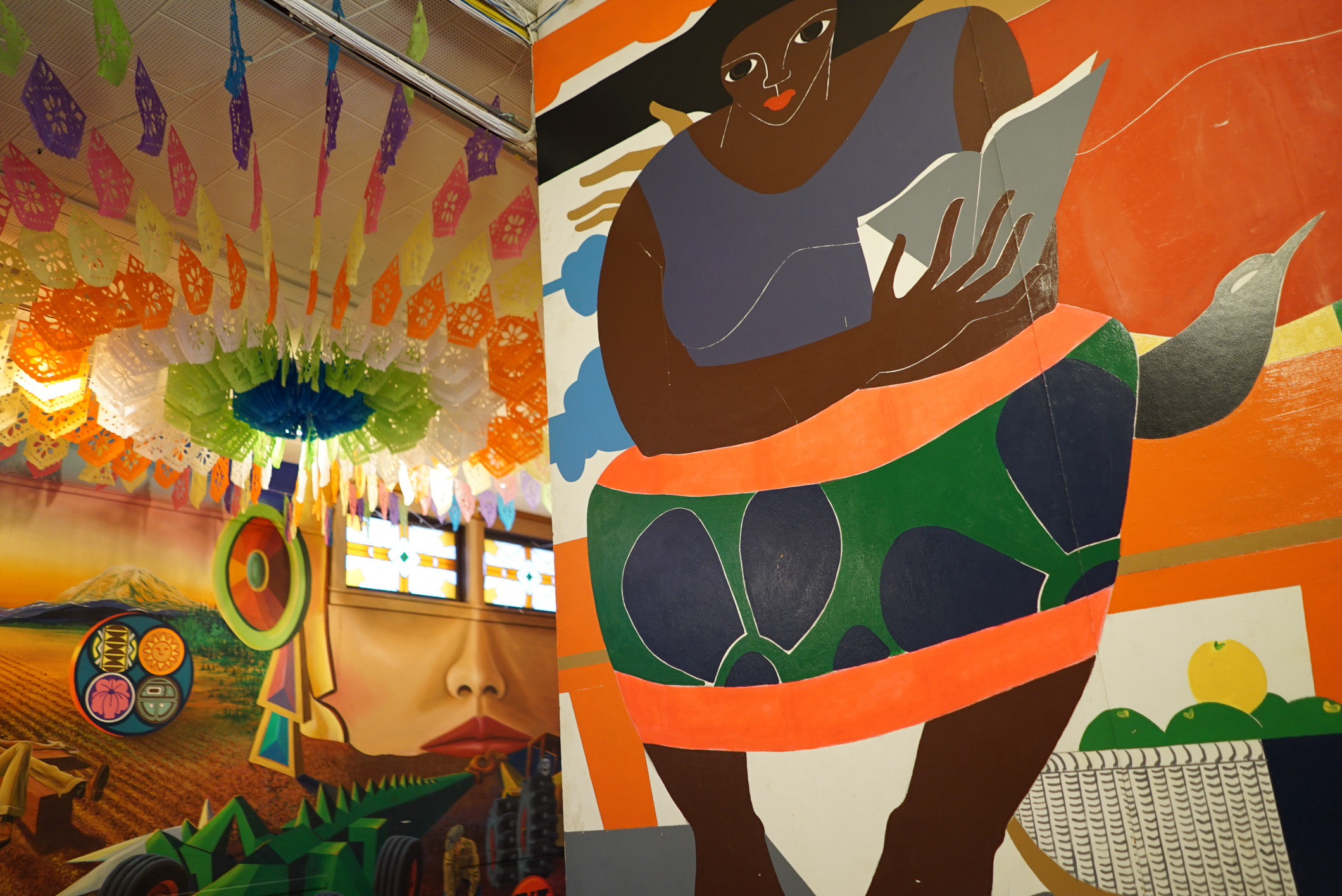 Sitting in the office of El Centro de la Raza, surrounded by colorful murals and creaking wooden floors, you would not guess you are in the epicenter of a modern apartment complex. In reality, though, it is the heart of something more—an alternative model for urban living.

The North Beacon Hill landmark is home to almost 300 people of every race and hosts on-site after-school programs for local youths. Plaza Roberto Maestas, named after the founder of El Centro de la Raza, is a public gathering space decorated with vibrant tiles arrayed by local artists. The new buildings bordering the plaza offer space to several small businesses including the Station café and a newly arrived Tacos Chukis shop. The community even hosts movie screenings in the summer.

Part of what makes the location special is that it is one of the few places in the city offering low-income housing sized for families and maintains a community-centered applicant selection process. Understandably, the demand is high, hearkening back to the site’s opening in the winter of 2016 that saw hundreds of people standing in line for a chance to rent a home here.

Estela Ortega, Executive Director of El Centro de la Raza and partner of the late founder Roberto Maestas, was animated as she discussed the expansion, occasionally rapping on the table for emphasis. After the success of the new buildings, she said churches and other organizations regularly ask how to follow El Centro de la Raza’s example for community land use.

The protest action that led to El Centro began in 1972, four years after the assassination of Martin Luther King Jr. and just two years after the Ohio State National Guard fired on a group of protesters killing four students. Indigenous rights groups had just ended their occupations of Alcatraz Island in San Francisco and Fort Lawton in Seattle. The promise of Lyndon Johnson’s Great Society had broken down as the war in Vietnam drew more attention and funding.

Roberto Maestas, an activist and organizer, was teaching English as a second language courses at South Seattle Community College when the state cut funding for the program motivating Maestas, his students and fellow teachers and community activists to take action. They peaceably occupied the abandoned Beacon Hill School and, later, the office of then Seattle Mayor Wes Uhlman. The demonstration led to an agreement to lease the property to Roberto Maestas for the symbolic sum of one dollar a year. Maestas founded El Centro de la Raza as a community-focused non-profit on the property.

Though the protest focused on Latino rights, other members of communities of color, the faith community, and anti-war activists joined the occupiers. The occupation itself provided housing for several community members through the Seattle winter.

Explaining the financial hardship the organization faced in the 70s and 80s, Ortega said, “we felt like we were always fighting for everything, occupying offices and picketing to demand resources for our community.”

“Our time came when the City of Seattle decided to put a light rail station here on Beacon Hill,” Ortega explained. El Centro de la Raza would now sit on a busy, pedestrian-friendly transportation hub. The non-profit worked to buy the property and plan for a capital campaign to raise money to build low-income family-sized housing. In 1999, they bought the land from the city for about 1.2 million dollars and began renovating the site.

Ortega said the city sent a representative to conduct a public meeting for input, but failed to complete the networking leg-work necessary to ensure a turnout. As a result, the event flopped. “As a community-based organization you can never give up your organizing to anybody,” Ortega explained.

Explaining the process, she said, “we had our vision of what we wanted to happen out here so based on that vision, we organized. We organized people who had never participated in a process like this.” Organizers met at separate meetings and organized who would speak at public gatherings in favor of including child care facilities, low-income housing units, a park, and other amenities in the new development.

Ortega recalled over 30 public meetings where community members came together to reach a consensus about how to shape their neighborhood. “You absolutely have to involve the community in the process,” she explained.

Originally from Baja California, Luis Rodriguez, the co-owner of the Station coffee shop, said he had not heard of a community centered non-profit before he encountered El Centro de la Raza. He said organizers from El Centro approached him to invite him to community land development discussions. “I was very happy to be a part of those meetings because I had an input in finding out what was going to be the use for this land.”

Describing the fundraising phase of building affordable housing, Ortega said El Centro de la Raza had a devoted capital campaign director and a grant writer, but “When we have things that are big, the entire organization is involved in one way or another. We don’t just leave it to one department to have it as their sole responsibility because if you do it’s not going to work.”

With proper administration, Ortega said up and coming non-profits who have land and a commitment “can develop housing in their respective communities and not have to have somebody, because they have resources, to own part of their project.”

With pain in her eyes, Ortega described the seven and a half years it took to raise money and complete the project. She said community members began to fear they wouldn’t build anything.

Non-profit housing projects take a longer time to complete because they require organizers to juggle all aspects of the endeavor, including fundraising, design approval, and construction. With $47 million going towards paying for the new construction and supporting infrastructure, raising the money slowed the process substantially.

To complete the project, the staff of El Centro de la Raza combined state funding, grants, a $5 million loan, and individual donations over five and a half years. “The hard work in [fundraising] is that you have to know people who have money.” Ortega explained. “That’s tough.”

Throughout the process, Ortega said the leadership of El Centro turned down offers of development for market-rate housing, studio apartments, and one bedrooms in favor of low-income units with the capacity for small families. “There was big money involved,” Ortega said. “They wanted to own a part of your project.”

Yet, she continued, “El Centro has always been about our own self-determination and we’re not going to have somebody own part of something that we have struggled for years and years to maintain.”

She said, “…the model shouldn’t be having some other entity own part of your property to do a development. We’ve got to come up with better solutions to help communities develop housing and other types of capital assets.”

Though El Centro de la Raza does use a management company for the homes it owns, Ortega said the non-profit maintains the final word on which housing applicants are accepted. Ortega explained that this essential distinction allows El Centro to provide housing for immigrants and people with criminal records.

“Doing this development out here,” she said, gesturing south toward new homes and business spaces, “is a night and day change of how the broader community saw El Centro de la Raza.”

Looking to the future, Ortega expressed a fear that funding for social programming will once again be cut, mirroring the conditions that led to the occupation in the 70s. To weather the storm, El Centro is planning to move towards more independent revenue streams to avoid depending on loans, grants, and fundraising.

For small business owners, however, the present is paying off. Rodriguez said his business almost tripled after moving across the street into the new complex next to the light rail station. He praised the large, street-level windows since they allow him to see the busy intersection as he works the counter and they allow the community to see him.

“Hopefully they can build more places like this. Hopefully this building can become the example for other neighborhoods,” Rodriguez said. “We don’t have to build these condos and those apartments and push people out so we can squeeze every single penny from people, but instead build community with one building.”

Will Sweger is a contributor to the South Seattle Emerald and a resident of Beacon Hill. His work has appeared in Seattle Weekly, Curbed Seattle and Borgen Magazine. Find him on Twitter @willsweger