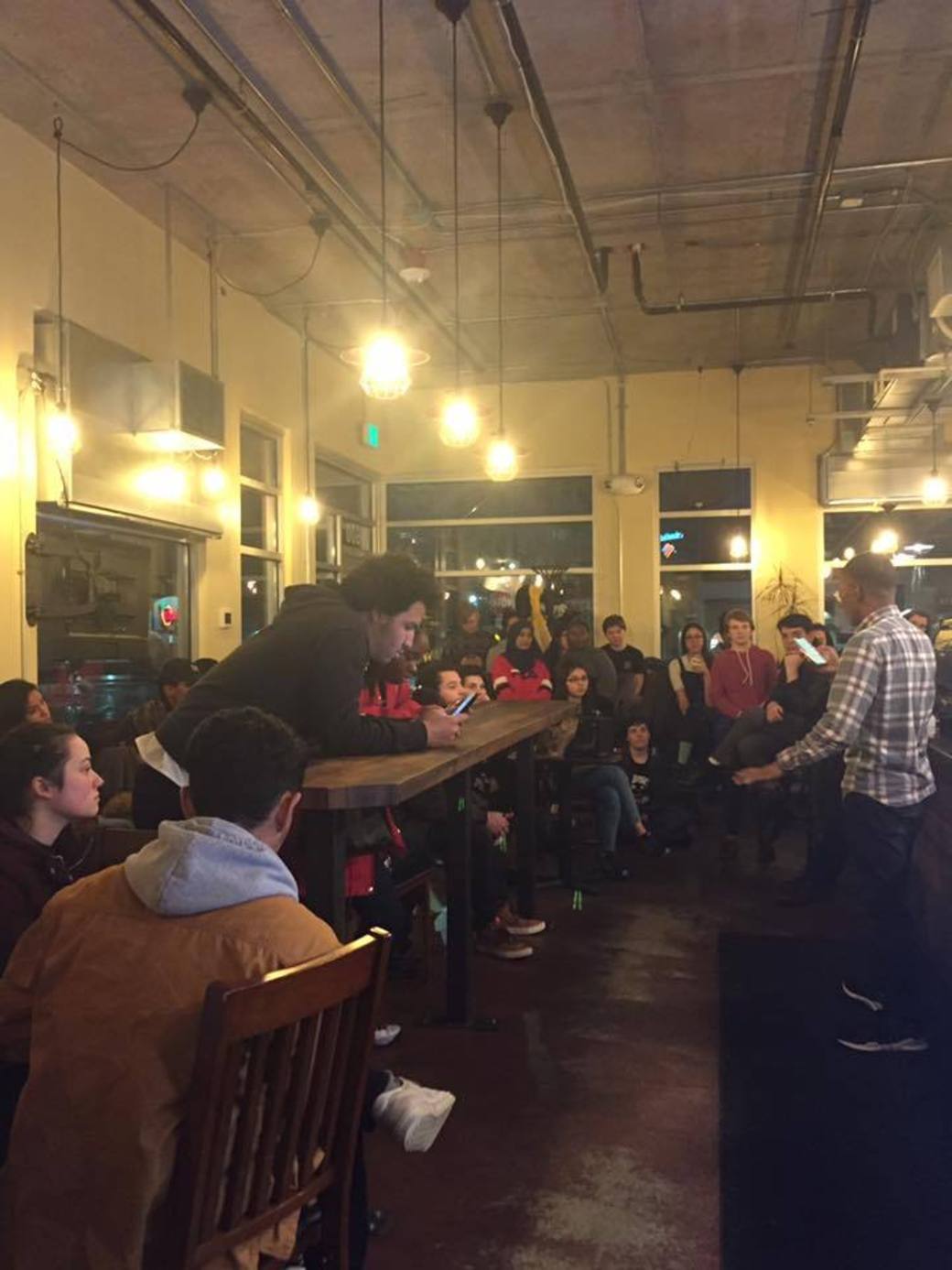 In early January, I stood among a forest of youth of all walks of life. Outside, rain splattered the windows and nightfall blanketed the building. Every seat taken, all faced the front where a young poet stood, preparing to open themselves to a congregation of strangers. The room was electric.

On the first Sunday of every month, Youth Speaks hosts an open mic at Beacon Hill’s community-driven coffeehouse The Station. My church youth group, on a whim, decided to spend our January 7 session at the open mic, and thank goodness we did. (We’ve now made it a regular outing!) In an adult-centric world, the event is a brave space for a variety of youth to share their truth, and share they do.

At my first Youth Speaks Open Mic, the participants regaled the audience with stories of various topics, many of which are taboo to discuss by anyone, let alone youth. While much of the country refuses to acknowledge reality, subjects such as religion, racism, Islamophobia, police brutality, transphobia, love, self love, resilience, immigration, deportation, anarchy, voting, poverty, single parents, mental illness, drugs, and family were all confronted at the mic.

Now more than ever, the confrontation of such difficult and controversial topics is integral to individual and societal growth. Youth Speaks encourages youth to use their voice and art to do just this. The youth conveyed their feelings about these topics via a number of differing methods.

With ukulele in hand, one participant’s voice graced our ears with tales of cupid and young love. Featured artist King Cobb used his slick rhymes to rant about the police department’s distasteful relationship with him and South Seattle as a whole. One of the night’s hosts Mimi Hubbard, delivering a captivating full-body performance, confessed their frustration toward the use of hashtags in artificial support of people struggling with mental illnesses – “If I hashtag needed your hashtag caring that much, I would have hashtag asked for it a long hashtag time ago.” Through poetry, another participant expressed their disgust for strangers’ ceaseless infatuation with their hijab. The youngest participant of the night humored the crowd with a collection of jokes and puns.

The reason so many youth were able to get up and share such personal stories and radical ideas to a crowd of mostly strangers is due to the radically inclusive environment of the open mic. Every audience member showed extraordinary support and engagement – levels seldom seen at similar adult events – by snapping for lines they resonated with, laughing with the performers, rubbing their hands for encouragement, and boisterously cheering after each performance.

This is why I love youth-centered events so much more than adult-centered. Acts dismissed as disruptive and disorderly at adult events are used as tools of celebration and support at youth events.

Providing spaces like this is so important because it gives the mic, literally and figuratively, to a population too-often disregarded as lazy, disengaged, and uninterested. More specifically though, it gives the mic to youth in the South End, youth of color, trans youth, youth with mental illnesses, youth resisting the lure of drugs, and Muslim youth to name a few.

This night, like many others, exemplifies how intersectional and progressive events by youth, for youth most often are. In an unexpected twist, I think many adults can learn from us. The collaborative way youth organize, the inclusive environments youth strive for, and the social awareness youth sustain are admirable and should be a model for all sorts of events in any and all contexts.

“We stand for being hella loud, for being unapologetically infinite, for liberation of self.” –Youth Speaks