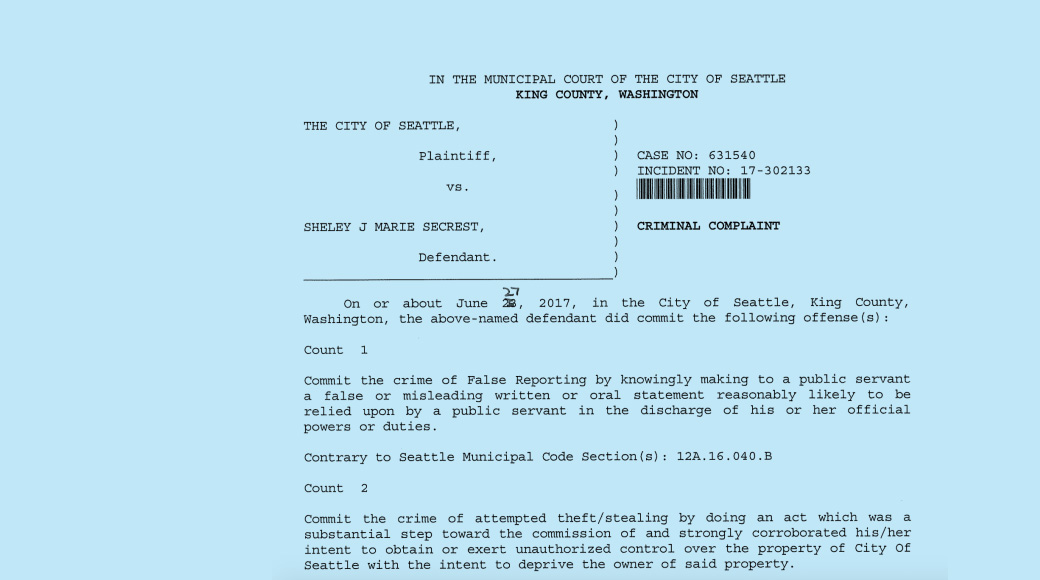 Seattle City Attorney Pete Holmes has filed criminal charges against former city council candidate Sheley Secrest, who allegedly used her own money to make it appear that she had more contributions toward the 400 required to qualify for democracy vouchers than she actually had. Secrest ran unsuccessfully for council Position 8, which is now held by Teresa Mosqueda, last year.

The charges include one misdemeanor charge of false reporting, which relates to the false reports Secrest allegedly filed with the Seattle Ethics and Elections Commission, and one gross misdemeanor charge of attempted theft, which refers to the potential $150,000* Secrest attempted to receive from the city through publicly funded democracy vouchers. The 2017 election was the first election in which candidates could qualify for democracy vouchers—$100 in contributions that voters can give to the candidate or candidates of their choice. To qualify for democracy vouchers, candidates had to get 400 signatures, along with small contributions of $10 or more, from Seattle voters. As the Seattle Times reported last year, Secrest’s former campaign manager, Patrick Burke, alleged that Secrest used $560 of her own money and misrepresented it as coming from voters who signed a petition to qualify her for the vouchers. (Secrest did not end up qualifying even with the disputed funds.)

Last year, Burke filed a police report charging that Secrest had told him to collect signatures and not to worry about getting the necessary corresponding contributions; after he turned in 56 signatures at the Trans Pride Festival and at a local high school, he says, Secrest pulled $600 in 20-dollar bills from her purse and handed him $560. Secrest has denied all the allegations.

Burke, who says he is now living at a Salvation Army homeless shelter, has also charged that Secrest failed to pay him more than $3,300 for his services as her campaign manager. (The Ethics and Elections Commission reports that the Secrest campaign paid Burke just over $1,300 and owes him $1,675, but says he was also promised 11.8 percent in bonus pay based on how many signatures and contributions he brought in.) He has a hearing this afternoon in his small-claims case against Secrest. (More about that in tomorrow’s Morning Crank.) ”

“[Secrest] said, ‘If you can stick with this until we get the democracy vouchers, it will be worth your while,’” Burke says, “and I said, ‘If that’s what we need to do, let’s just push it and get done, but you have to understand that I can’t be at all the events that you need me to be at.” Burke says that by the time he was fired from the campaign, in July of last year, he could not afford to keep his phone on or pay for bus fare; part of his dispute is that Secrest paid new vendors before she paid him.

Secrest says Burke “has been paid for all services performed before the date of his termination,” adding, “Washington is an at-will employment state, meaning an employer does not need cause to fire an employee.  In this matter, we repeatedly informed Patrick that we could not afford to keep him on staff. We clearly told him to stop working for pay, and we repeatedly told him that we will reach out once funds were available.”

I have reached out to Secrest for comment on the charges against her, and will update this post if she responds.

In Portland, voters shut down a similar public-financing program after one candidate misappropriated more than $90,000 in public funds, and another was convicted for forging signatures.

This is a breaking news post and I will update as more information becomes available.