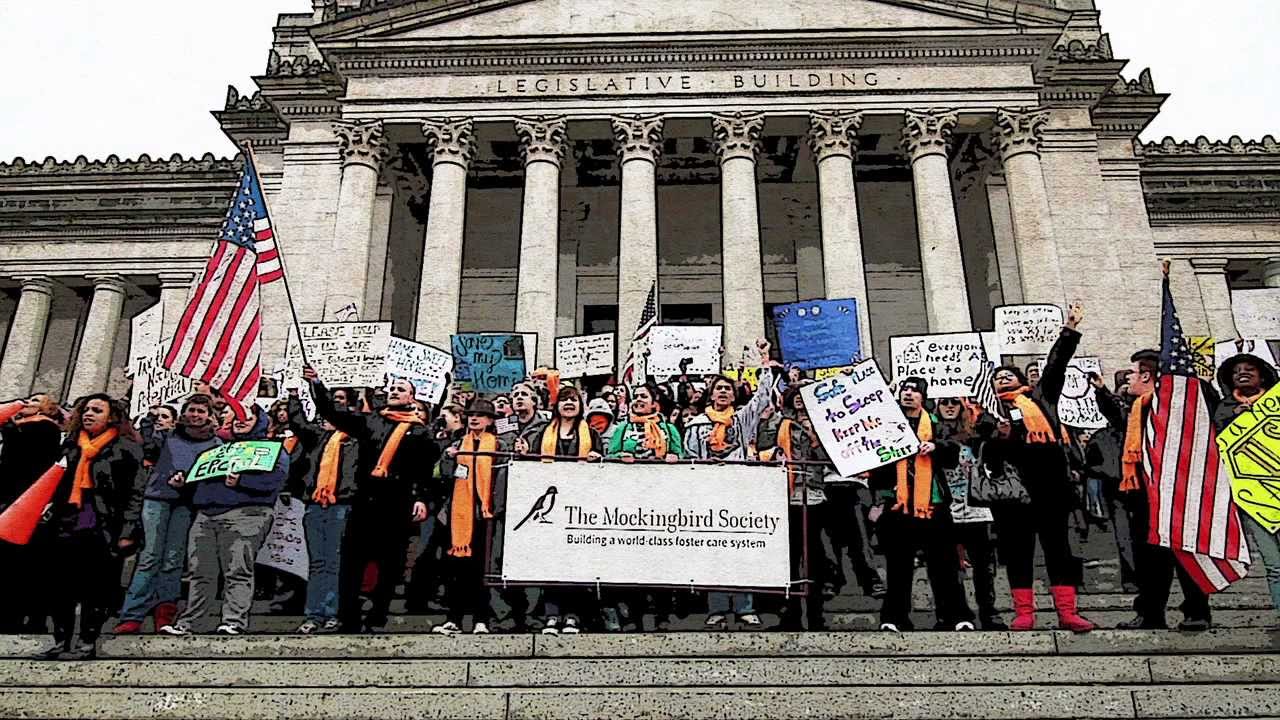 Every year in late January, more than 300 youth, families, and allies gather in Olympia to learn how to improve the lives of youth who are in foster care or homeless advocate for bills with Washington legislators. Run by The Mockingbird Society for the past 13 years, Youth Advocacy Day touts responsibility, activism and community engagement. The year’s event took place January 26.

People pack The United Churches of Olympia Friday morning, all sporting bright orange scarves and shouting gleefully at each other. The Mockingbird Society brings around 100 youth to the event. Shelter providers also bring their contingents, filling the church with teens and adults alike. The result? Semi-organized chaos.

I meet Azia, the young woman I follow around for the day. Slender, animated and with an easy charm about her, Azia wears her orange scarf around her waist like a sash and immediately steers me into the basement of the church for some coffee and breakfast.

Azia says that this is her second Youth Advocacy Day, and that she has a larger hand in it than she did last year. She participated in the event last year, but this year, she’ll be leading a group.

“I’m excited”, she says, picking at a satsuma.

Over coffee and pastries, Azia fills me in on the three priorities of this year’s Youth Advocacy Day: Expanding Extended Foster Care (EFC) to be more inclusive of all youth and allow re-entry if EFC teens want to leave and come back; Senate Bill 5596, which would end detention for status offenses such as truancy and running away; and expanding the Passport to College Promise Scholarship, a program for foster youth that has been inaccessible to youth in tribal care or youth who have moved states.

Throughout the morning, people stop Azia, asking how she is, congratulating her. She did a testimony on EFC that was filmed recently, and it seems to have gone over well in this community.

After breakfast, kids, teens, and adults pack the church — hundreds of people who schlepped out in the rain to make it to Olympia. Some have babies or toddlers with them.

Organizers invite three youth to speak about the three main priorities for the day.

Bri, age 19, with short pink hair, speaks about Senate Bill 5596, the status offender bill. She is followed by Angel, who addresses the expansion of EFC.

Angel slams her hand as she describes the way information has been disseminated about EFC, striking the podium with each word: “Miscommunication, misinformation and missed connections.

Jade advocates for the Passport Scholarship to extend it to youth on tribal land: “Everyone helps you get into college, but not stay in college.”

After speeches, the crowd heads in groups to speak with legislators. Azia led Group 34, which consisted of about 10 teenagers who radiate cigarette smoke and enthusiasm.

It’s a 10-minute walk to the legislative building in the pouring rain. Azia stirs the group along, trying to get them to stick together, garnering volunteers for speaking about the topics. Most are reluctant to speak, though most of them say they have firsthand experience with these issues, getting arrested for truancy or running away or being rejected from EFC.

Two people in the group have dogs. Officers at the legislative building turn them away, even though one has a service animal license. The group goes back outside to try to figure a way to get the dogs in, amidst muttered curse words from the dog owners. But the officers aren’t budging.

“We’re standing outside of the building, and these officers … well, to be frank, they’re harassing us. They won’t let us in with our service dogs,” Azia says on the phone to someone from the Mockingbird Society. After it’s clear that there is nothing more she can do, a smaller group journeys inside while a few remain outside with the dogs.

Group 34’s first meeting is with Rep. Larry Springer, D-Kirkland. He doesn’t have any specific aims, so they will be talking to him about all three primary issues today to hopefully get his support on all of them.

Sierra, age 22, leads another group. She radiates energy with thick red glasses and a halo of short curly hair that bounces slightly with enthusiasm.

She got involved with The Mockingbird Society in April 2014 while she was working at New Horizons as a peer outreach counselor. Though she has never been in foster care, she has been homeless since age 16 (she’s now 22) and has been in and out of rehab a few times. Clean now, she advocates in Olympia a considerable amount — in fact, she says, she will be back in Olympia later in the week.

She can work with The Mockingbird Society until age 25, and intends to stay with them as long as possible

“Hopefully I can apply for an adult job within the organization”, she says.

She’s currently attending Seattle Central to become an alcohol and drug addiction counselor for homeless and at-risk youth. A big proponent of harm reduction practices, we talked for a while about safe injection sites and the importance of the buddy system when using.

This is her third Youth Advocacy Day.

Sierra was homeless at age 16, kicked out of her house but unable to stay at a shelter because she couldn’t get a signature from her parents approving her for a bed. Because of this, she is most passionate about Senate Bill 5596, which stops the detention of youth for truancy or running away. She spoke to a session aide for Sen. Maralyn Chase, D-Esperance, about the issue. Chase has pledged her support.

“The thing I appreciate most about The Mockingbird Society is that you never go into something alone”, she says. She felt prepared for her meetings and is looking forward to coming again.

After meeting with legislators, the crowd meets outside in the freezing rain. Youth leaders wave banners and shout into megaphones: “Give us attention, not detention,” “Education for every nation,” and “Let us be in EFC.”

Armed with colorful handmade posters, the crowd begins a final walk around the legislative building and back to the church.