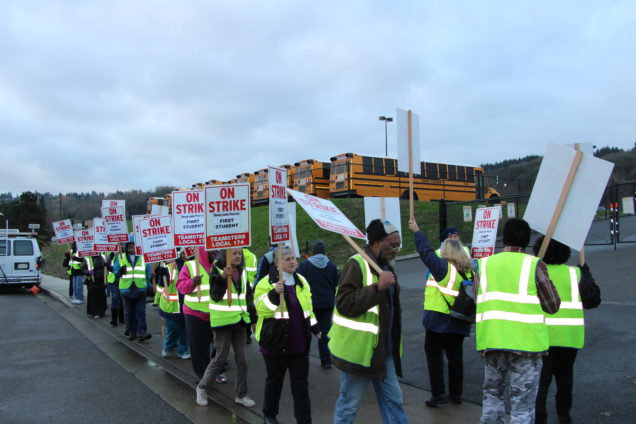 Barring a last-minute breakthrough, the more than 400 bus drivers from Teamsters Local 174 will go on strike beginning Thursday morning against what the union says are unfair labor practices at First Student, the company contracted to provide “yellow bus” service for the thousands of kids in Seattle Public Schools.

“Teamsters Local 174 does not typically announce strikes in advance; however, the Union and its members wished to give Seattle parents adequate notice to make arrangements for their children,” the union said in its announcement.

The inability to agree on a deal over health care and retirement benefits led the drivers to hold a one-day strike in November.

The people who safely transport our kiddos in Seattle to public schools deserve to be treated with dignity and respect. This must begin with a decent contract with First Student. We stand in solidarity with Teamsters Local 174 in their pursuit of health care benefits and retirement plans for Seattle school bus drivers that reflect our values as a city. When public dollars go to contract businesses, it is imperative that we ensure we are taking care of the people who take care of our kiddos and this means a higher standard for wages and benefits. We applaud the efforts of Local 174 to bring First Student up to par.

The council members also provided some transportation advice for parents:

“We know this means some extra planning for parents,” they write.

While many public schools in Seattle function as “neighborhood schools” where kids live within walking distance, many of the district’s special programs for students are based at specific schools across the city.

SPS families, meanwhile, may see more labor issues ahead. In 2015, the teachers union held its first strike in Seattle in 30 years before pounding out a new deal. Now, the clock is ticking on that deal with new contract negotiations with the union looming.