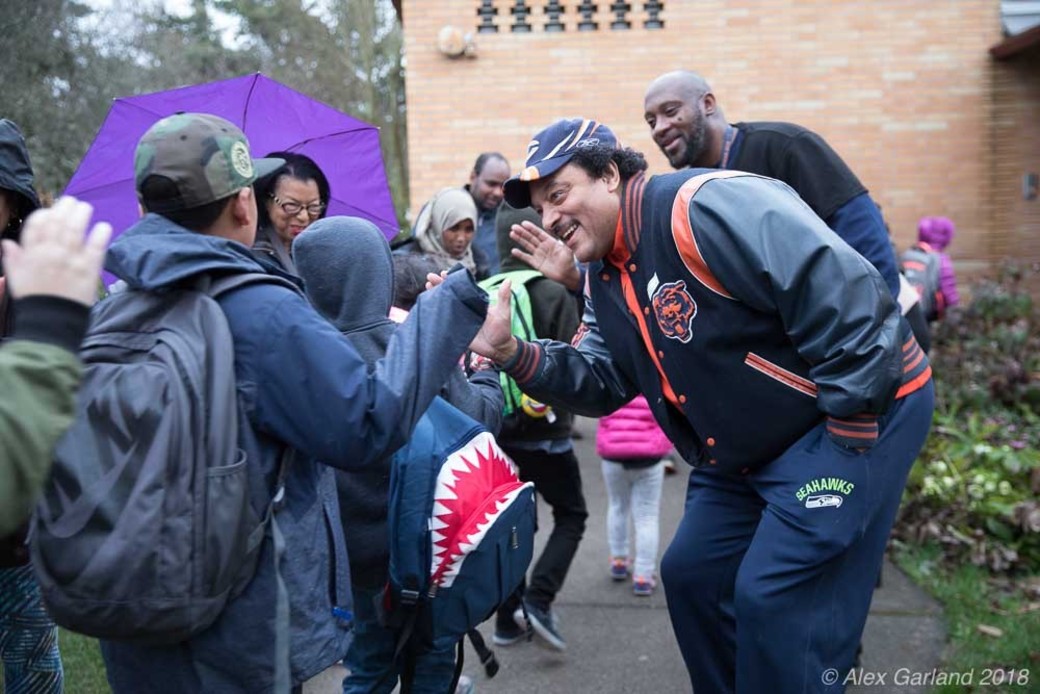 The enthusiastic welcome was part of the first annual Graham Hill Black High 5, featuring local African-American community leaders dressed in their work clothes who lined the school’s entryway starting about 7:30 am to voice encouragement to students prior to the school day beginning.

According to Graham Hill principal Deena Russo, the event also promoted a favorable visual of the South End’s Black community, an image constantly in need of affirmation. “It’s important for children to see positive representation of African American community members,” she said. “They don’t get to see that enough. The media is full of negative images instead of positive.”

The event is the first for the K through 5th-grade school and imitates the Black High 5s at other South End schools including Leschi Elementary and South Shore, which will each host one Feb 9 and Feb 12 respectively.

Graham Hill’s version comes thanks in part to Naquaia Hall, whose child Daiya attends the school. Aware of previous Black High 5 events, Hall saw them as vital esteem booster for all of the school’s children, but particularly the black students.

“Our community is so diverse here and a big chunk is African American,” Hall said. “I think it’s really cool to have [the school] as a space to greet the kids and to get them excited. Some kids don’t even get that greeting or that good morning from their own parents.”

Hall joined other Graham Hill parents and faculty to reach out to local churches, businesses, non-profits, and neighborhood groups to encourage Black community members to participate whether or not their child was enrolled in the South End school.

Speaking of Black High 5’s timing at the beginning of Black History Month, Hall said, “This was important to do during this month because there’s so much of it that the teachers really don’t have the time to teach.”

However, Monday’s gathering was as much about turning towards the future as it was the past, according to Hall. She concluded, “This is really good for our kids, especially our boys to see professional men who look like them from within their community to show what they can reach to if they keep on in their studies.”

The week is part of a national action endorsed by the Seattle School Board in a resolution last Wednesday. During the week, educators at Seattle public schools, including Graham Hill, will wear Black Lives Matter shirts and teach lesson plans based on structural racism, intersectional Black identities, Black History, and anti-racist movements.