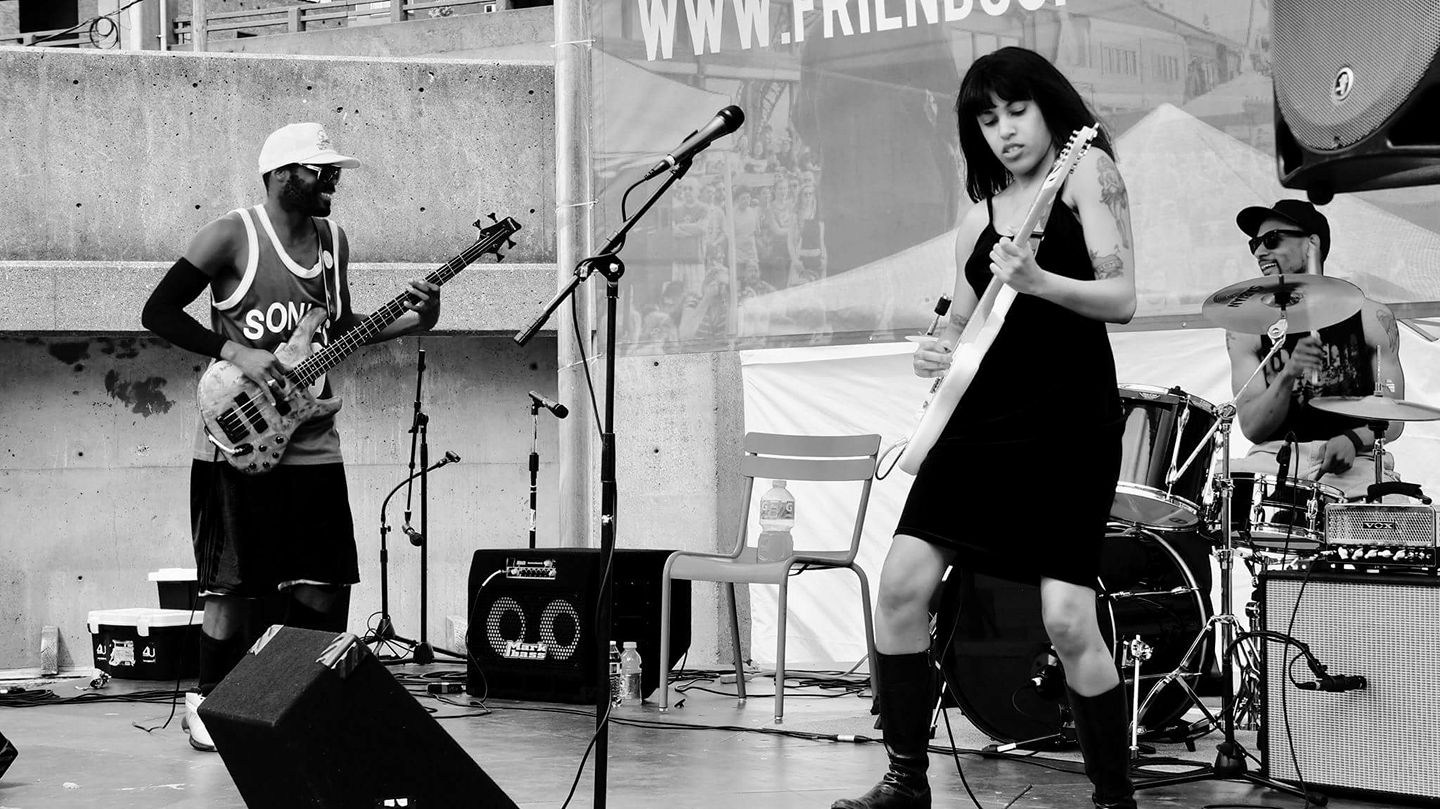 The Piranha Shop will showcase a musical collaboration of two female lead rock groups that have about as much in common as The Brady Bunch and Pam Grier. Prom Queen, an extraordinary talented spot-on reproduction of a vintage girl lead surf-rock group and their Band Crush, The Black Tones, a pro-black, heavy-metal mix of blues and punk, will share the stage in a noble attempt at melding contrasting genres, styles and ideals.

Band Crush, a City Arts Magazine concert series that selects two different established musical acts, that admire each-others artistic integrity, and City Arts invites them to combine ensembles to become one act, for a one-time concert. The goal is for both groups, and the audience, to momentarily shed their genre politics.

Prom Queen’s soft, yet sadistic ambient surf pop, termed “Doom-Wop” (which also happens to be the name of their 2017 release), juxtaposes the emotions and attitudes of a recently blossomed happy-go-lucky 1950s teenager.  And yet, their dreamy material cuts with the insight of a modern woman certain that it’s the End of the World (1st track on “Doom-Wop”). Lead vocalist Leeni Queeno emits a somber siren song backed by an on-point 1960’s television studio sounding rhythm section.

“We are thrilled to be able to collaborate with The Black Tones for this event. There are bands that you love so much that you wish you could just meld into them and The Black Tones are it for me. The first time I saw them, my entire being said “Yyyyessssssss!!!” So to have an outlet to be able to express this deep love with this band is super cool! City Arts is such a treasure and I am grateful to them for creating such exciting opportunities for artists in this city.”- Celene Ramadan, lead vocalist, and guitarist of Prom Queen.

The Seattle based pro-black punk-rock blues-influenced power trio, describes their heavy sound as a “mix of Kurt Cobain and cornbread.” Twins Cedric David (drums) and Eva Walker (guitar/vocals) have an undeniable rhythmic bond that drives this heavy yet syncopated outfit in ways that only family can (e.g. The Staple Singers, The Carter Family, The Isley Brothers, Sly and the Family Stone, Sisters Sledge, Brothers Johnson, etc). Bassist Robbie Little supports Walker’s crunchy power chords while reinforcing a heavy backbeat with his punchy low-end presence. His solid bass work is crucial to this loud and proud black power-based rock and roll band. The Black Tones are on a righteous mission to inform and acquaint their (mostly white) audiences with a message: that rock and roll owes its creators a long overdue acknowledgment.

Whatever may happen on Saturday night when The Black Tones and Prom Queen take the stage together, one thing will be guaranteed: It’s going to rock. “When I first ran into Prom Queen’s music about one and half years ago, I said to myself, ‘I need to know this lady, I need to be her friend!’ And now we’re her band crush! I’m so excited to be doing this with Leeni and her band!” -Eva Walker, lead singer, and guitarist of The Black Tones.