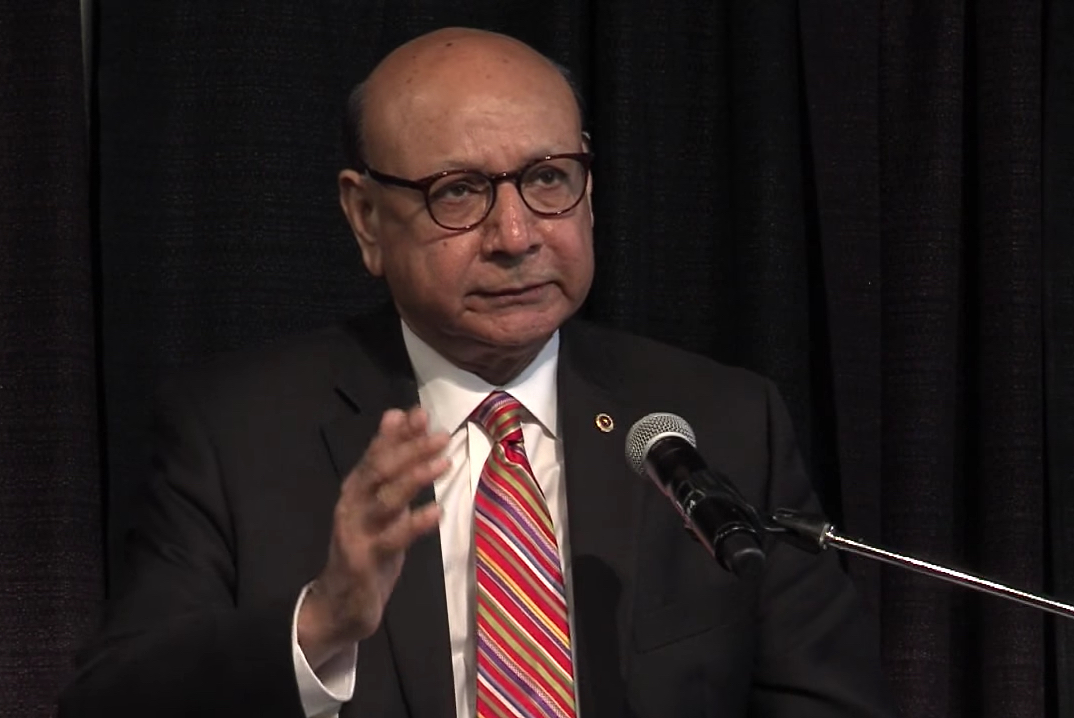 (This article was originally published by The Seattle Globalist)

Khizr Khan, the Gold Star father who called out President Donald Trump’s anti-Muslim campaign rhetoric, says he draws strength and resolve from the memory of what Japanese Americans faced being incarcerated by the U.S. government in World War II.

“From your experience, your sacrifice, the communities that are under stress today gain the strength,” he told the crowd — some of whom were WWII veterans — at Densho’s Day of Remembrance on Monday.

Khan, whose son U.S. Army Capt. Humayun Khan was killed fighting the Iraq War in 2004, was the guest speaker at Densho’s annual commemoration of the anniversary of Executive Order 9066. The order forced West Coast Japanese American men, women and children — both U.S. born and immigrants — into incarceration camps, stripping them of their livelihoods and their homes.

As is too often the case, history has repeated itself. Since Trump campaigned for the presidency and took office, his rhetoric on Muslim Americans has eerily paralleled that of Japanese Americans some 75 years ago. President Trump as a candidate proposed the idea of a Muslim registry and tried to ban travelers originating from nations with large populations of Muslims.

Khan said striving for real American values are what will help the country get through the “anomaly” of the current presidency.

“As a Muslim under the current circumstances, I draw strength from Japanese Americans. And I am hopeful, I am certain that this moment will pass,” Khan said.

Reflecting on the Japanese American experience during WWII – being incarcerated on the home front while fighting for the very country that questioned their patriotism abroad – Khan also said Japanese Americans are a guiding light, a moral compass for the nation, and example of what it means to be patriotic even when being unjustly vilified by one’s own country.

“The human dignities that are enshrined in our constitution treats all of us as equal, regardless of what group we are in, what religion, what preferences we have — we’re all treated equal,” Khan said.

Densho, which works to preserve the history of the families affected by Executive Order 9066, worked with the Council for American-Islamic Relations, Washington, to bring Khan to the annual event.

“It’s really connecting and talking about each other and what is going on in the country,” Densho Executive Director Tom Ikeda said.

Ikeda said some of the Nisei veterans who served in WWII were more compelled to attend the event when they learned that doing so would be a gesture to stand in solidarity with Muslim Americans.

Khan was welcomed with a standing ovation. Musician Kishi Bashi also performed three original pieces exploring themes of incarceration, oppression, and the resilience of hope through music, and presented a trailer for his film “Omoiyari: a songfilm.”

Ikeda said it was important to come together across communities that have historically been pitted against one another. He pointed to a tactic used by oppressors: divide and conquer. One example is people who use Japanese Americans as a “model minority.”

He said communities of color need to reject that narrative to conquer discrimination and bigotry.

“We have to have that conversation [about being pitted against one another]” Ikeda said. “Because oftentimes our communities… they listen to that and they start believing that and we have to bring that out in the open and we have to talk about this because again, it just makes sense for us to work together.”