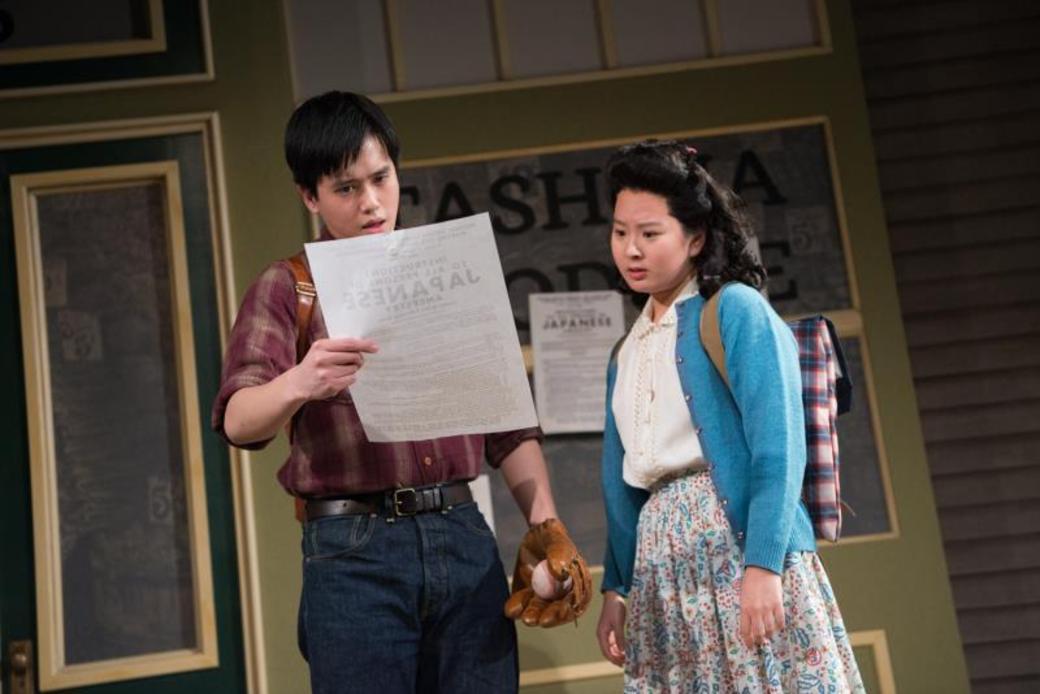 “How many of you have experienced racism, bullying, or teasing? Raise your hand.” The actors ask the audience to close our eyes so answers will be confidential, but I feel my son lift his hand beside me. My heart is pained, suddenly awash in blues, purples, and greys. Later I ask my son–has he experienced all three things? Bullying, teasing, and racism? He nods his head assuredly, says yes, “All of it.”

This weekend I took my 8-year-old Japanese Mixed American son to his first play The Journal of Ben Uchida: Citizen 13559 at the Seattle Children’s Theater (SGT). The historical play, adapted by Naomi Iizuka from Barry Denenberg’s 2003 novel of the same name, follows the internment of a Japanese American family during World War II as seen through the eyes and journaling of the family’s youngest member, Ben Uchida.

Ben Uchida (played by Mikko Juan) is an enthusiastic 12-year-old boy who adores his hardworking optometrist father Masao Uchida (played by Ray Tagavilla). Mr. Uchida has dutifully bought into the sanguine immigrant stereotype–that if you pull yourself up by your bootstraps and don’t rock the boat, anyone can achieve the American Dream. It’s a patriotic lesson he imparts optimistically to his son and family as, certainly, it has seemed to work for him. But the father’s core beliefs are put to the test when Pearl Harbor is bombed and the entire family is suddenly rounded up, sent to prison camp in the desert, and loses everything but each other.

The Uchidas are fictional but their story is based on the real stories of thousands of Japanese Americans forced into US prison camps in the mid-twentieth century. Following the Japanese attack on Pearl Harbor, President Franklin D. Roosevelt signed Executive Order 9066 on February 19, 1942, which paved the way for the racist incarceration of more than 110,000 Japanese Americans until the end of the war. Multiracial Japanese Americans, like my son and husband, were also sent to live in the camps even if they had as little as “1/16” Japanese heritage.

Each member of the Uchida family processes this trauma with complex human difference. Mr. Uchida sinks into a deep depression. Ben becomes buried in his thoughts and journals ferociously. By contrast, his teenage sister Naomi (played by Mi Kang) becomes angry and defiant, demanding answers to hard questions, like, “Why are we being sent away!?” Meanwhile, their good-natured mother Mrs. Uchida (played by Annie Yim) grabs a broom and obsessively tries to control the dust, lint, and dirt in their barracks even though it just keeps reappearing the next day.

There are tough encounters with various white characters (played by Brenda Joyner and Conner Nedderson) some of which can be very hard to watch. “Jap!” “Slant-eyed Chink!” “The only good Jap is a dead Jap!” Lines like these were excruciating for me to hear as a person of Taiwanese/Chinese descent. It was even harder, however, to see my wide-eyed Japanese/Taiwanese/Chinese child hear the same, realizing those words were meant for him too. At one point my son even sucked in his breath when white characters appeared onstage, whispering anxiously to me, “Here comes more white people.”

Seattle Children’s Theatre recommends 9+ for heavy content such as this: racism, slurs, profiling, aggression, violence, and suicide. But I think many parents of color realize our children don’t have the luxury of waiting to talk about and process these things. My son at eight years old–as he is well aware–has already experienced racism. He was mislabeled an English Language Learner by Seattle Public Schools beginning in kindergarten; endured other students saying his Japanese name wrong all of first grade with no support from his white teacher; is being called “Chinese boy” in second grade by his peers and sees daily how children like him are rarely represented, or represented as stereotypes, in the books he reads, shows and movies he watches, and video games he plays.

To the point, People of Color need our histories to help us understand and contextualize the way we’re treated in this majority-white nation practically from the time we’re born. Yet what is taught to us in school persists in being mostly white-washed, invisibilizing the stories of our predecessors which keeps us disoriented and silent. So, I have complete clarity around the fact that I am the one who needs to make sure this education happens for my child. Meaning that even though my son did not meet SCT’s age recommendation, I took him to see The Journal of Ben Uchida anyway.

Knowing accurate histories helps People of Color know where we stand, gives us the tools to navigate a highly racialized society and fight to be heard. It also helps us show up for the struggles of others. True, the play was heavy. I cried often and know my son felt emotional too. But afterward, the questions my son has been asking and the connections he keeps making are truly inspiring.

For instance, my son wondered if the performers knew the picture book Baseball Saved Us, by Ken Mochizuki. I was surprised and impressed he remembered this book about an interned Japanese American community finding resilience in creating their own camp baseball league. We hadn’t read the book in a long time but he recalled it right away, clearly noting the similarities (which shows how important it is for us to read books to our children of color that reflect the experiences of people like them).

Following, we acknowledged the Japanese American people we know today, our friends and neighbors, who have family members that were interned. My son also wanted to know a lot more about his own Japanese immigrant grandmother, his Obaachan; about when and where she was born, her relationship to the war, as well as her immigration story.

For these reasons, and so many more, I can’t recommend this play enough. Especially for Asian American families.

The Journal of Ben Uchida runs a little over an hour with a short talkback at the end, well-facilitated by the actors, which you should stay for. Additionally, SGT has produced a meticulous, in-depth audience guide available online. The guide is an incredible resource comprising detailed descriptions of costume and set design, a conversation with Director Desdemona Chiang, and important historical context on the forced removal of Japanese Americans from Western Washington.

You know, when my son was a preschooler he went through a phase where he was obsessed with depictions of blond-haired, blue-eyed white boys. He would stare at said images, let me know out loud that he liked them best, and sometimes, when asked about his own appearance would even say he looked like those white boys (which he doesn’t). It was horrible, and we have worked together for years to try to undo this internalized oppression and help him celebrate instead who he really is.

After years of counter-narrating at home, I can’t say this sense of racial inferiority in him has been fully erased. But I can say that my son has learned to appreciate and seek out, with pride, depictions of children and people who look like him. And I know this is true because upon seeing The Journal of Ben Uchida–though Japanese American characters were oppressed, put down, had everything taken away from them–now it wasn’t the light-haired white characters my son wanted to be.

The Journal of Ben Uchida: Citizen 13559 is playing at the Seattle Children’s Theatre now through March 4. Tickets can be purchased here.

Sharon H. Chang is an activist, photographer, and award-winning writer. She is the author of the acclaimed book Raising Mixed Race (2016) and is currently working on her second book looking at Asian American women and gendered racism.