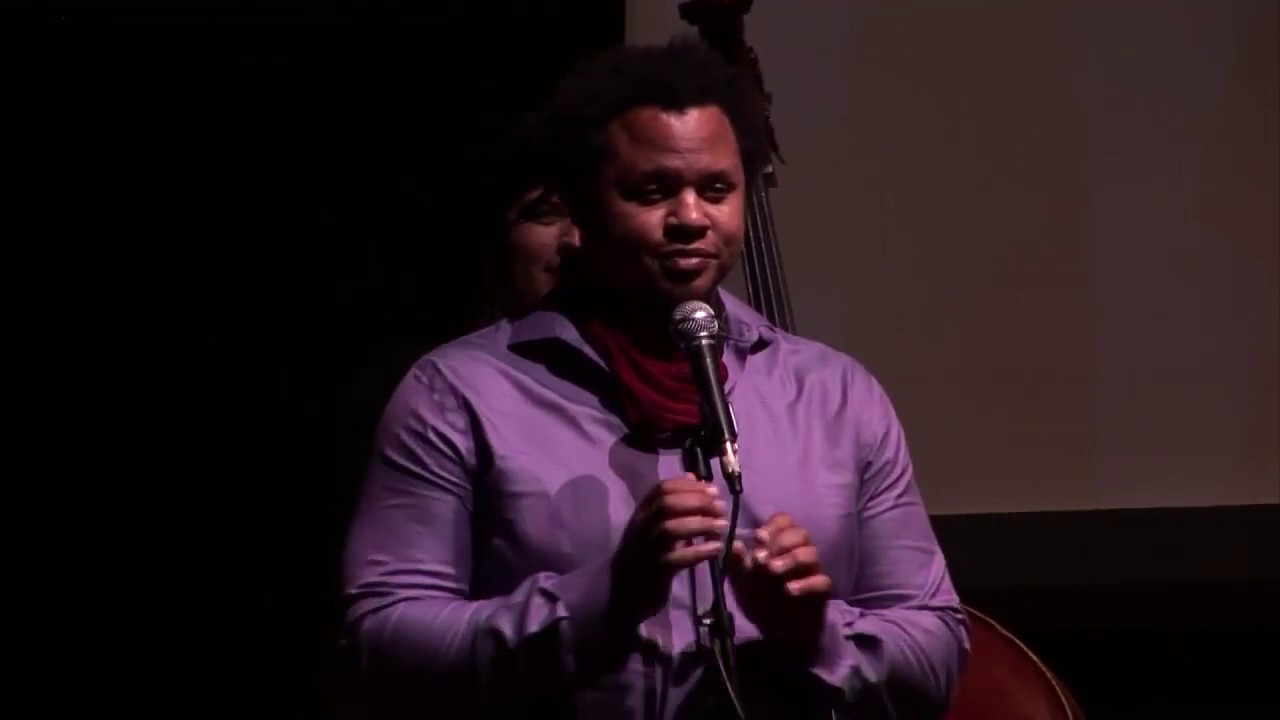 When you walk into the historic On The Boards theater, the music is already playing. In one moment it’s the theme from Scrubs. At another, “My Girl.” In front of you sits a 30-plus-piece ensemble ranging from French horn to stand-up bass to a full string section.

And in a few moments, you’ll see the Seattle Girls Choir fill risers and the doo-wop soul group, The Traumatics, shimmy in front of their mics. Indeed, The night is expansive. Like the soul of its creator.

Evan Flory-Barnes is many things. To some, he’s the city’s premier double bass player – a prominent figure in the scene, especially with his neo-jazz group, Industrial Revelation. But to the On The Board audiences over the weekend, Flory-Barnes was more than that. He was a character actor, composer, music theorist, storyteller and dancer. He was also a son and brother. On Sunday, with his mother and sister watching from the front row, Flory Barnes made his family proud.

The show, aptly named On Loving the Muse and Family, ran for four days and sold out each one. The piece was an offering, a love letter and an honoring of the myriad influences in Flory-Barnes life. From the hurtful to the harmonious. Taking the stage, Flory-Barnes greeted his audience with a bopping “Anthem of Welcome.” Then, through the lenses of five characters – his “higher, shadow, child-like and old man” self along, later, with himself, “fully integrated” – Flory-Barnes elucidated the layers and bonds of many significant relationships in his life.

Introducing original song after song, the composer went on to display his newfound singing prowess, something he’s been concertedly working on for over a year. Detailing poetic observations and nuances of love – like the difference between adoration and possession and the dualism of having a crush on a friend and not wanting sex – On Loving induced tears, applause, hoots and laughter from the hundreds watching.

The second half of the show began with a small song his mother would sing him as a boy, “You’re little, you’re not big. You look like a baby and you act like a pig.” Except the musician, as one does, turned the ditty into an all-out orchestral performance. The song was a nod to the theme of the show’s second half, during which Flory-Barnes paid much respect to his mother and also acknowledged the at-times trying relationship he had with his father, a veteran of the Vietnam War who died when Flory-Barnes was 16. “If my mother was the conduit and example for me for everlasting love and support, my father was a person to practice that on,” he said.

Later, Flory-Barnes explained how a bad breakup informed his journey to a higher and stronger form of self-appreciation. And in this way, Flory-Barnes seemed to almost implore the hundreds watching to do the same for themselves. While On Loving was an exposure or a window into the inner-workings of Flory-Barnes’ heart, it was also a blueprint into how to better care for your self and spirit. It was like a therapy session put to music. And, at one point during the show’s Sunday performance, the epic creation moved Flory-Barnes’ family to get out of their seats and shake a few tail feathers in the aisle.

After the two-and-a-half-hour show, if you were one of the lucky ones to get an audience with the night’s creator in the lobby, you likely received an embrace, a word or three of gratitude or even a shared cry. Catharsis was the undertone of the night, a collective purging of the typical-though-brutal challenges we as a people – yes, as a giant family – endure by, from and for one another. The night was a reminder that we actually share more than we often allow ourselves to remember. And Seattle can thank Flory-Barnes for sharing that with us.