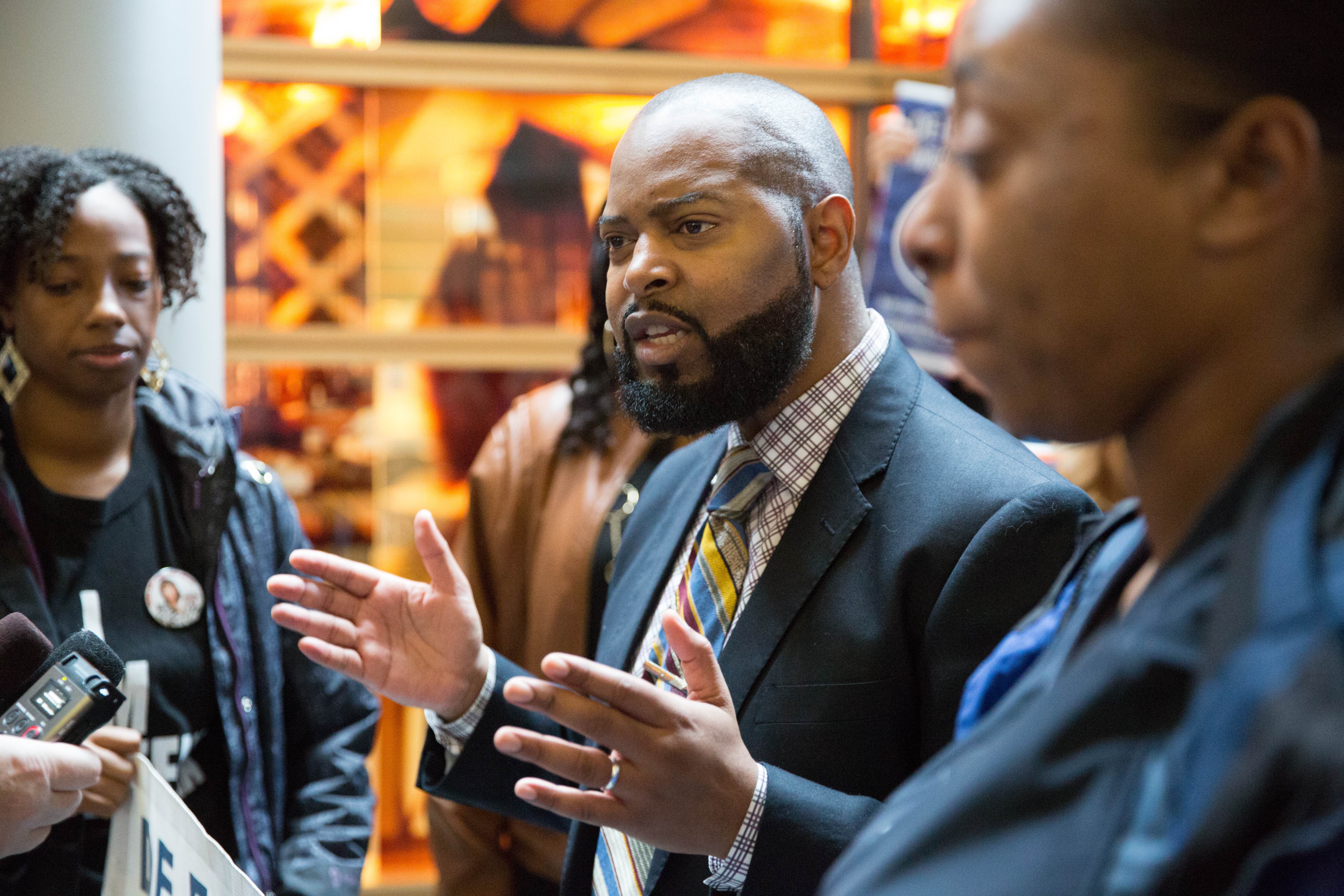 For the past two years, pain and trauma have been Andre Taylor’s constant companions. As he does almost every time he talks about his history, Taylor wills himself to drag up the incident that spurred him to act: on Feb. 21, 2016, Seattle Police Department officers shot and killed his brother, Che Taylor. It was a needless show of deadly force, he said, and traumatic for him and his family.

“When my family was going through the [grieving] process, we didn’t have anywhere to go. We didn’t know what to do. We began to attack each other, because of pain,” Taylor said. “When that process was over, I said, ‘To hell with it. Another family will never have to go through that process again.”

Taylor is the founder of Not This Time, an organization founded around his brother’s death that focuses on reducing police violence and providing communities and families with support and safety. And today, he is hopeful – “excited,” even, he said, thanks to the work of grassroots organization De-Escalate Washington, headed by more than 20 other activists, including Taylor. On March 7, 2018, few weeks after the anniversary of Che Taylor’s death, the state legislature passed a bill removing language that, under current state law, makes it difficult to hold police officers criminally liable for wrongful shootings.

De-Escalate Washington spearheaded the legislative change, under Initiative 940, which collected more than 360,000 supporting signatures. The group focuses on teaching police de-escalation techniques and providing mental health response training, and brings issues of race and gender identity to the forefront of the conversation around law enforcement and officers’ approach to the public.

The current law states that only officers who are found to have acted with “malice” and without “good faith” may be found responsible for shooting and killing people. But these two attributes are so difficult to prove, it’s almost impossible to charge an officer with wrongful death. The bill the legislature passed Tuesday isn’t the exact text of I-940, but it’s close: while it doesn’t remove the “good faith” language, it does remove the word, “malice”.

Democratic Rep. Tomiko Santos said that despite the initiative’s original language, she doesn’t think the bone of contention was the “good faith” wording, and doesn’t believe the incoming law’s intentions are undermined by keeping that particular language.

“We’ve always said … that the untenable standard was the standard of ‘malice,’ and … many of us in the legislature have maintained that position for several years,” Santos said. “‘Good faith’ is a reasonable standard that you see in code in states across the country.”

“I am looking forward to a new day in Washington state, not only for law enforcement, but for the community,” Walden said. “It’s time to chart a new course around police-involved shootings – not only here, but around the country.”

Walden is the founder of Mothers For Police Accountability, which she formed 27 years ago, after her sons were beaten by police officers. The organization works to shed light on unnecessary police brutality, particularly against young Black men.

While she acknowledged the bill took a long time to pass, Walden believes some perspective is in order: it’s only been “155 years … since Lincoln signed [the 13th Amendment,” she said. It’s taken centuries of work for people of color to win basic rights, for which they are still fighting.

Moreover, she said, just because the bill passed doesn’t mean the problems will be magically fixed overnight. The only way things will truly change is through public vigilance.

“We have to be grateful. We just have to keep working at it,” Walden said. “People are awake and they are willing to be vigilant on it. And the price of freedom is vigilance.”

Taylor, too, repeats history to himself. It’s how he continues, he said, even on days his brother’s death scrapes deeply through his bones.

“When I think about my ancestors who were enslaved, and I think about what they had to face, what they had to go through – today, I couldn’t fathom that in my mind,” Taylor said. “I can see them saying to me … ‘If we have gone through one of the worst atrocities of mankind, if we have taken that, for you to be where you are, are you then trying to compare what you are going through versus what we have gone through?’ To me, there is no way that I can compare the suffering of my ancestors to whatever amount of suffering I might face today.”