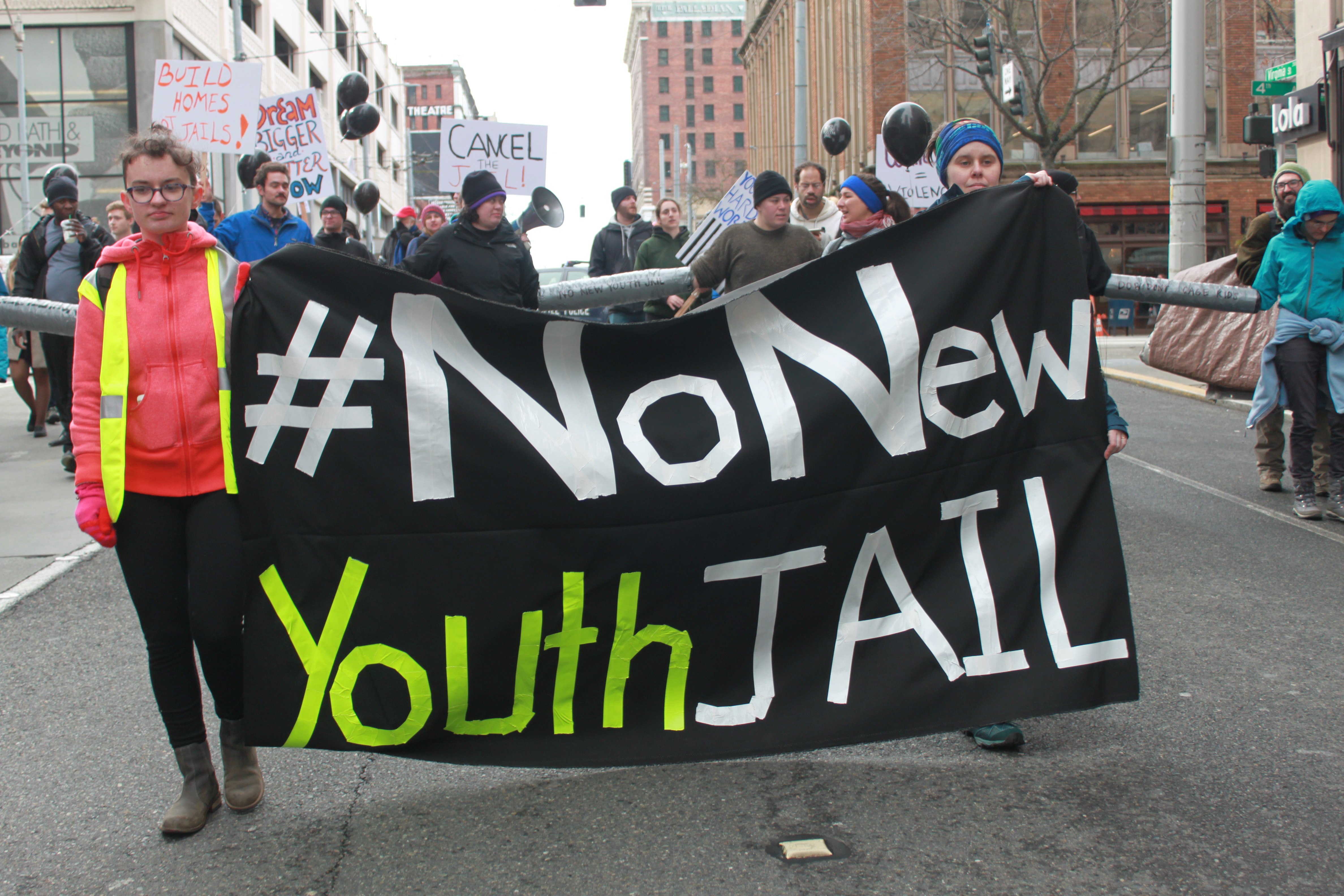 At 8am Friday March 2, I joined four anti-racist White collectives who were supporting the No New Youth Jail campaign as they united to take the streets of downtown Seattle, initially locking arms (literally) and posting themselves in front of King County Executive Dow Constantine’s office at the Chinook Building before continuing down 4th avenue and locking down at multiple intersections. The direct action created major delays on both I-5 and I-90, with buses needing to be re-routed.

The march ended at The Westin, where Constantine was reportedly supposed to attend the Golden Tennis Shoe Awards, a “social justice” fundraiser and “desirable destination” for top Democrats around the nation, hosted by Washington Senator Patty Murray. 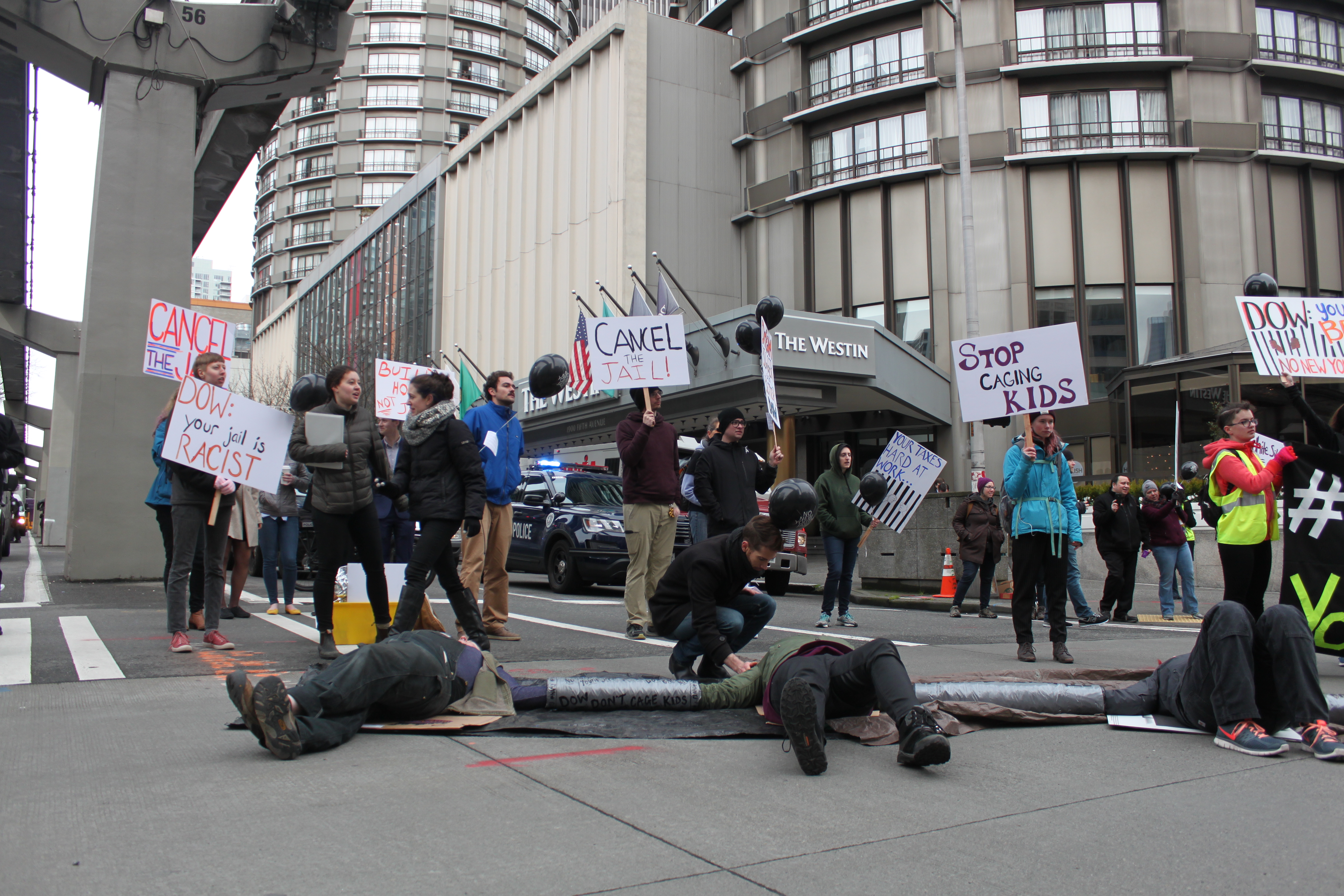 A couple of the collective members unlocked their arms from their lock boxes  and entered the fundraiser, at one point taking the mic and demanding that Constantine stop the construction of, despite the County’s justifications, they and many others feel is an illegal $210 million youth jail at 12th and Alder. Dow was reportedly not at the event. His chief of staff, Rachel Smith, however, agreed to come out and speak with the demonstrators. Once outside, she was given a bullhorn and said, “We are committed to zero youth detention, we are committed to a public health approach to juvenile detention and we want to work with all of you in getting there.” (Emphasis mine.)

Those locked down in the intersection asked fellow activists and demonstrators who had joined the protest, “Is that enough?” to which they responded “No!” emphasizing that the collective are committed to prison abolition, which means eliminating prisons and replacing them with more humane and effective systems. 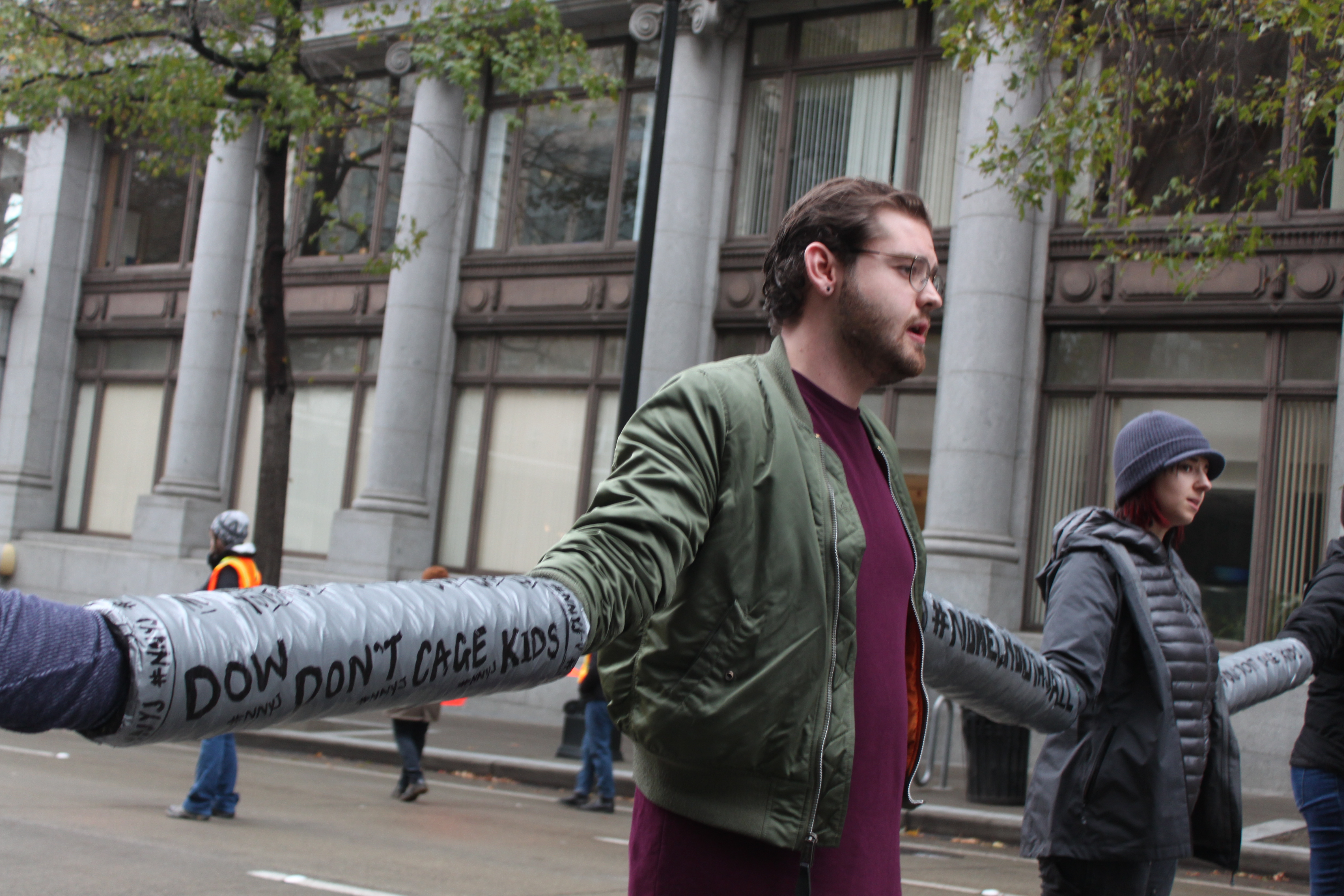 “As a King County Public Health employee, I have witnessed a hush-hush culture when it comes to speaking out about the youth jail,” Kelsen Caldwell, a lead organizer with the Coalition of Anti-Racist Whites said in the collectives press release. “This is a form of White silence and White violence. We need county employees to speak out and break this silence. I want to know how Dow Constantine can lead a County with an Equity and Social Justice Initiative, which leads with undoing racism, and simultaneously invest in building jails that we all know will disproportionately cage Black and Brown children. How is that equity or justice?”

Organizers of the protest say this has been a long historic fight involving legal and other strategies to try and stop the construction of the youth jail, beginning 6 years ago, led by youth and communities of color. “The No New Youth Jail coalition has tried many different tactics since 2012, even direct conversation with county officials. Dow and the county haven’t been responsive, so we escalated our tactics. Shutting down traffic was a strategic decision to disrupt business as usual. Once the traffic stopped and the cameras turned on, we wanted to expose the ways Dow Constantine is exploiting the jail for his own profit, that the jail is part of a system of racism, and to show White folks that we have a stake in ending the jail.”

In a statement by Olivia Smith, a member of social justice groups Youth Undoing Institutional Racism and European Dissent, “This action was an opportunity for anti-racist White people to build community with each other and the Black and Brown youth leading this movement. The longer it takes Dow to cancel the jail, the stronger we get. Next, I’d like to see human services and affordable housing advocates join the No New Youth Jail campaign. There’s no doubt in my mind that that’s where the budget cuts will come from when the Supreme Court affirms that King County has been illegally collecting property taxes for this jail.”

The action lasted 6 hours, with “surprisingly” no arrests.

I have attended many rallies, protests, and direct actions in the for 4 years that I’ve lived in Seattle. Something that was glaringly different to me than any other protest I’ve been to here was the behavior of the Seattle Police Department. Demonstrators locked themselves down in multiple major city arterials, created a “traffic nightmare,” and disrupted a fancy Democratic event, all with minimal police presence. It’s hard to imagine that the city would have responded this way if the action was done by Black, Indigenous, and People of Color (BIPOC).

Not even a year ago, I went to a block party put on by Bloc The Juvi at the youth jail site where a BBQ took place and community artists performed to bring attention to the construction, and to show solidarity with the youth currently inside. While no major traffic thoroughfares were blocked, and no arrests would be made, officers arrived in riot gear and were equipped with batons and large canisters of pepper spray. Also noticeably missing at last week’s protest were Blue Lives Matter patches on their uniforms, something I see consistently at Black Lives Matter and anti-racist protests in the city worn by officers. Which makes me wonder, is Seattle finally becoming the “liberal” progressive city it so badly wants to be, listening to and learning from the city’s organizers and activists pushing for freedom and social justice? Or does the Seattle Police Department only use excessive force and intimidation tactics when the actions are lead by BIPOC organizers?

I asked Smith for her thoughts: “This action made it clear that police exist to protect White people. The cops were incredibly relaxed and respectful the whole day. I don’t think they would have reacted that way if it were Black and Brown youth in the streets. It’s unacceptable for our county to continue to invest precious resources into a criminal justice system that upholds White supremacy and cages kids.”

Although the action was covered by all major news outlets, their main focus seems to be two things; the angry drivers, including a video of two women trying to run over demonstrators and yelling “Those kinds of kids killed my daughter,” misreporting that there was an injury (there was none) while offering no other context or comment. “Hurt people hurt people,” I told my friend, half-jokingly (bad jokes are my trauma response, that’s why I became a comedian.) “Hurt people kill people” they quipped back. 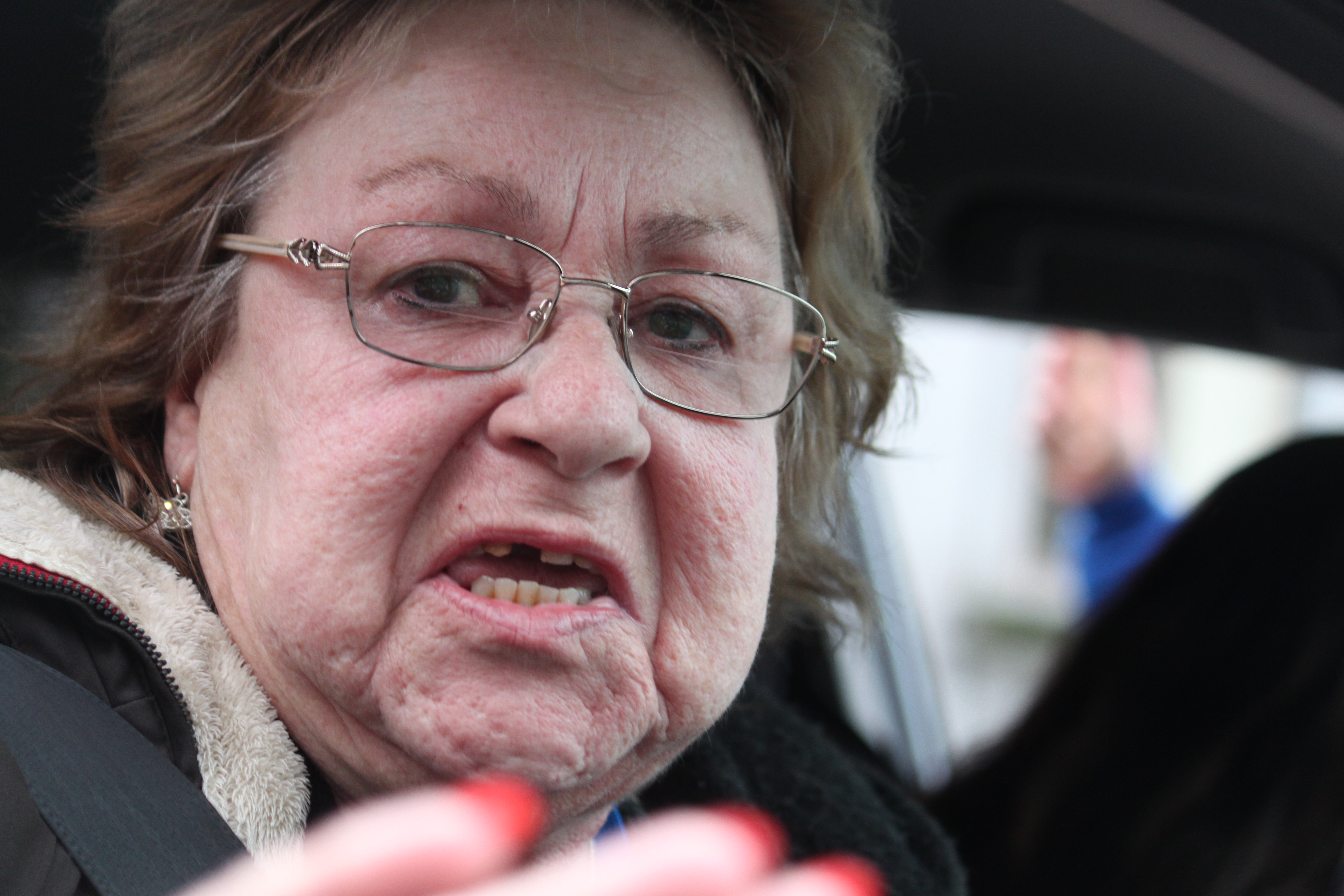 The second thing the media has focused on is the messaging, also without context or comment.

Despite organizers of the action naming Ending the Prison Industrial Complex (EPIC) and YUIR in their press release, if those news outlets reached out to anyone at all, they chose Constantine for further comment. Leaving out context or commentary from those making the demands and simply reporting without doing their own research leads to confusion:

There are plenty of statistics that back up the collectives claims that investing in community-based alternatives makes more sense, and that there are glaring racial disparities in youth detention and arrests. There’s even article after article describing efforts by community members and our own county for healthier alternatives to youth detention, including Seattle’s own Creative Justice. The question then becomes, is the information not available? Or is there a willful (racist) ignorance or ulterior motive?

New Jersey Democratic Senator Cory Booker, who was attending the fundraiser inside The Westin at the time, gave the protesters outside a shout out: In his celebration of youth activism, however, Booker seemed to liken anti-jail protesters paralyzing downtown Seattle traffic with Parkland, Florida students who survived the Stoneman Douglas High School massacre.

If Democratic/liberal/progressive Seattleites are truly committed to “resisting” the current Trump regime, then, it would seem to me, that they would also be against deportation, detention, and this youth jail.

Last week’s action showed what it can look like when White folks look past the click bait, stop passing the buck, and really show up for the youth. And what that looks like, is listening to and taking directions from the youth, and apparently gaining a response from the media, police force, and public officials not usually seen by BIPOC. 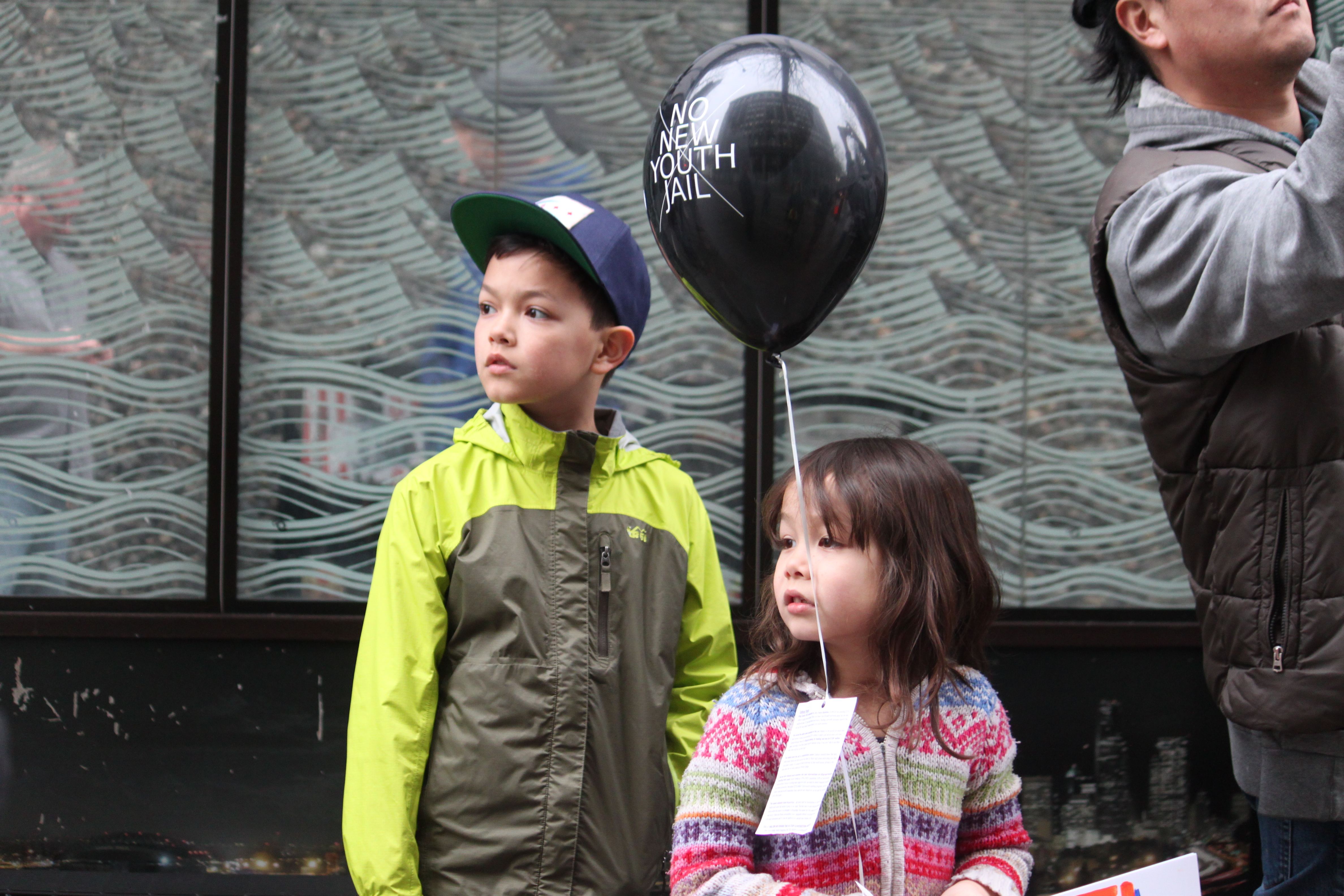 The No New Youth Jail campaign shows no signs of stopping. What can we do to honor the work that’s already been done in this campaign, learn from those efforts, use this new attention and energy to imagine and manifest a future that refuses to support outdated racist systems and commit to creating a better future for our youth? I guess time will tell.