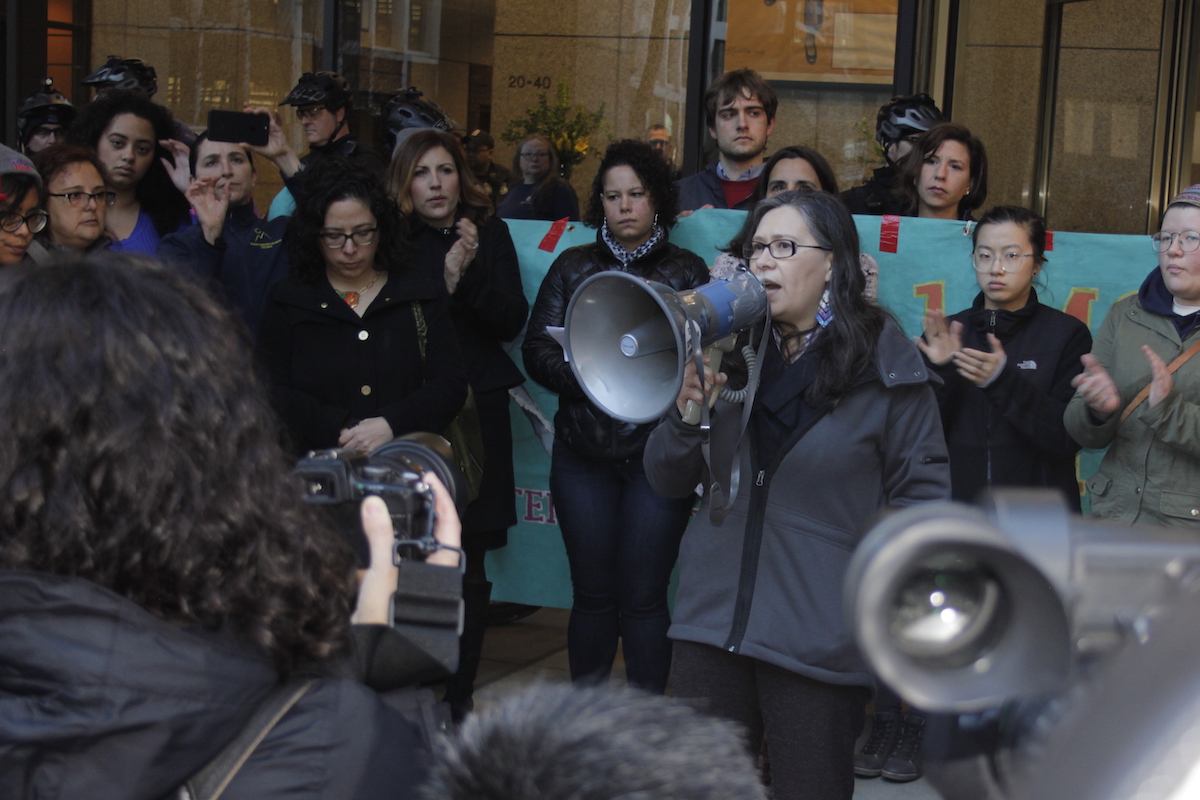 (This article was originally published by The Seattle Globalist)

Dozens came to downtown Seattle Thursday to support Maru Mora-Villapando in her first hearing in immigration court, since the federal government started deportation proceedings against the immigration activist.

Mora-Villalpando’s lawyers are trying to have the deportation proceedings dismissed, arguing that the Department of Homeland Security is violating her First Amendment rights.

Mora-Villalpando told her supporters on Thursday that Immigration and Customs Enforcement is not accountable and thus urged them to keep fighting, not just for her, but for all families who are being targeted by ICE for deportation.

“Be there for absolutely everybody,” she said.

“The only reason why we are facing this crisis is because we allowed it. We allowed for ICE to grow this big,” she said. “The only solution is to dismantle ICE.”

Seattle Immigration court set a May 22 for Mora-Villalpando after her attorneys filed a motion to dismiss the deportation proceedings last Monday. The attorneys argue that the Department of Homeland Security proceedings violate her First Amendment rights.

In their filing to dismiss the case, they argued “there is a clear causal connection between Ms.Mora-Villalpando protected speech and the government’s adverse actions. ICE didn’t hide the fact that it was placing Ms. Mora-Villalpando into proceedings because of ‘anti-ICE’ activism and comments to the press.” Read the entire filing here.

Villalpando, who lives in Bellingham, is the spokesperson of  NWDC Resistance, a local volunteer group that campaigns against deportations. She has been at the forefront of many pro-immigrant demonstrations and protests against the Northwest Detention Center, the privately held facility where ICE detains people who are awaiting detention hearings.

The Northwest Detention Center’s parent company, GEO Group, has been the subject of lawsuits and criticism regarding conditions at their immigration detention facilities.

DHS lawyers oppose the motion. Mora-Villalpando’s attorney said federal attorneys are expected to file their response by writing by April 9.

Mora-Villalpando’s supporters at the Thursday rally said they believe that that ICE has been retaliating against vocal immigration activists who oppose the agency.

“I definitely believe that the crackdown on immigrants is directly connected to mass incarceration and criminalization of communities of color in the U.S. as well as racist wars abroad,” Junga Subedar, a civil rights attorney from Bellingham, told the Seattle Globalist.

“For many centuries Jews have been the subject of bigotry and demonization which imposes the responsibilities to stand up with others who are being subjected to the same,” he said.

Brown says that he wants “justice for folks who are under immediate threat of deportation by ICE principally on the basis of their political activity.”

Jackie Vaughn, an organizer with No New Youth Jail, said there were parallels between the federal government’s treatment of undocumented immigrants and the criminal justice system.

“The same systems of exploitation and oppression that are locking our children up in the youth jail are the same systems that are deporting and detaining undocumented immigrants,” Vaughn said. “It’s about creating fear and terrorizing our communities.”

Mora-Villapando’s attorney said he hopes the immigration judge will dismiss ICE charges before the May hearing, but urged rally-goers to continue fighting for undocumented immigrants who don’t have as much visibility as his client.

Moro-Villalpando also encouraged the crowd to support others.

“Please, keep fighting! There’s no way we can stop. We shouldn’t stop. We won’t stop,” she said. “We’ll take a break once ICE is dismantled. We’ll continue our work for the liberation of all.”