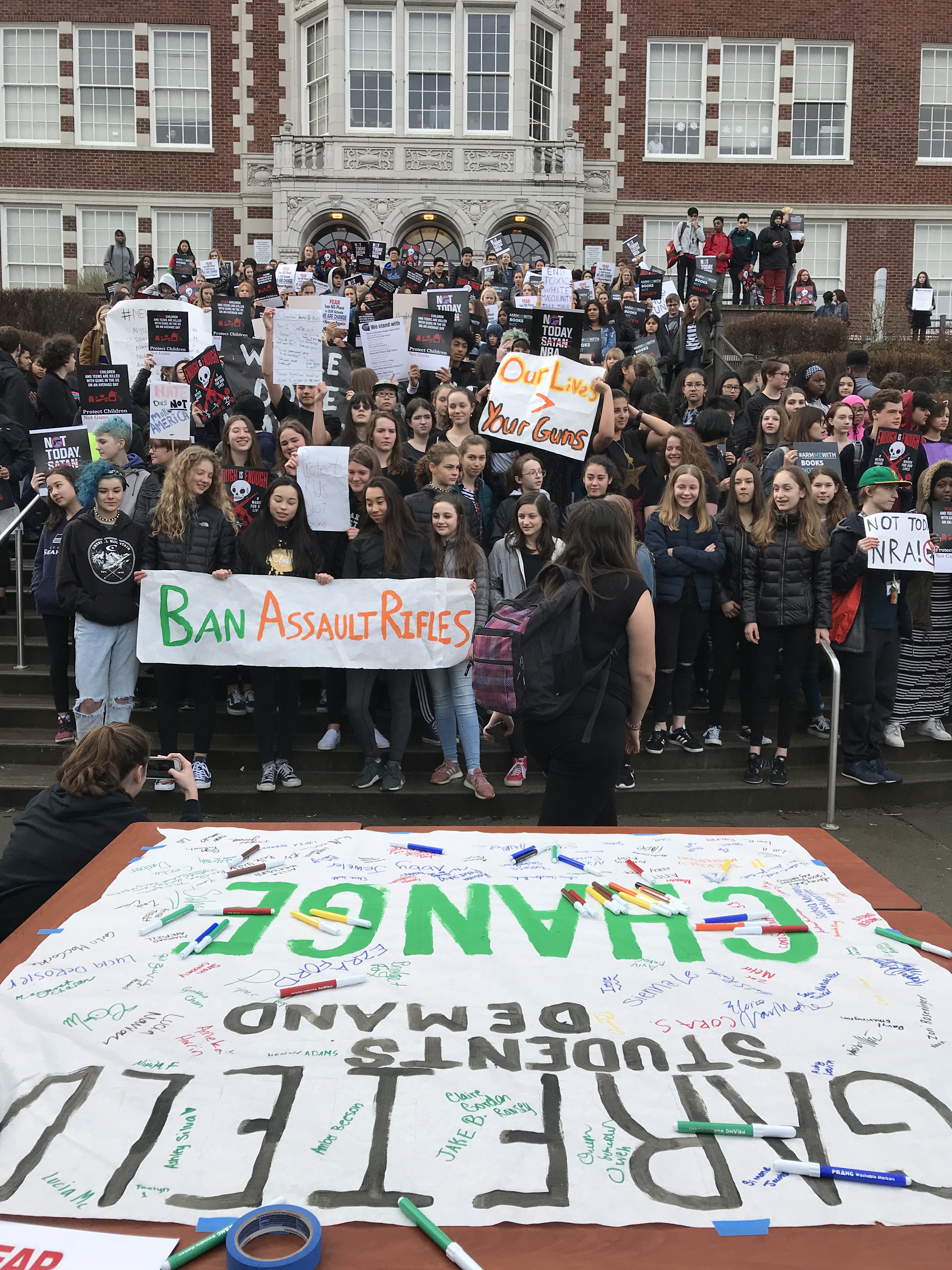 College decisions come out this week.

As a high school senior, I’ve been told this is what I should be worrying about right now. I see my friends, celebrating acceptances and comforting each other through rejections, waiting anxiously for the next round of decisions to be released. I see my classmates, stressing about math tests and history homework and making spring break plans, and think that this should be my world right now.

Instead, my world is emails and interviews and six-hour planning meetings at coffee shops that kick us out so they can close. Instead of worrying about college decisions, I’m worried about trying to raise enough money to execute a protest that 40,000 people are expected to attend. Instead of study groups and movie nights, I have press ops and panels and meetings with government officials. Instead of being high school students, I and the other student organizers of March for Our Lives Seattle are working what is essentially a full-time job, trying to make this march happen, because simply put, our lives depend on it.

It’s hard for me to focus in class right now, because I’m busy planning the march. But it’s even harder to focus in school when I’m wondering if I’m going to make it home alive. It’s hard to worry about college when hundreds of kids across the country will never make it there because their lives were tragically cut short by gun violence.

I’ve grown up in what is now known as the mass shooting generation. Born six months after Columbine, mass shootings have always been part of my life, a terrifying but normal reality of my world. Sandy Hook, New Jersey, Colorado, Ohio, California, Tennessee, Mississippi, Parkland – the body count continues to grow, and yet our elected officials, who are meant to protect us, still refuse to act on common sense gun reform. Since Sandy Hook, 7,000 children have died in their communities and schools due to gun violence. How high must that number get before we act? 10,000? 15,000? When our schools and our communities join that list?

When I got involved in March for Our Lives Seattle, it was because of Parkland, but it was also because of the fear that my school might be next, a fear made all too real by the text from my best friend saying her school was on lockdown because of reports of gunfire on campus. In that moment, there was nothing I could do to make sure she was okay, nothing but wait for a text saying she was still alive, until finally, news came that everyone was safe and that the shots heard had been fired off campus.

In that moment, I realized that we can’t wait to take action until something happens – by then it’s too late, kids are already dead. We have to act now, and we will hold every elected official accountable. We must pass common-sense gun laws, such as universal background checks and a ban on assault rifles to keep weapons out of the hands of people who will use them for harm. We must increase the age limit for gun purchase from 18-21. We must ban bump stocks nationally, and we must ask our elected officials to stop prioritizing guns over our lives by accepting support from the NRA.

What’s so inspiring about this movement is the realization it has prompted in me that even as a teenager, I have power. I’ve grown up hearing my parents and teachers and friends tell me that I’ll make a difference in this world – someday. After I go to college, and start a career, and become an adult. Yet my involvement in this movement has shown me that this impact can start now. I helped plan a walkout at my high school that hundreds of my classmates participated in. We’re planning an event that 40,000 people are going to attend, an event that cannot be ignored by the politicians elected to represent us. And there are thousands of youth just like us, all across the nation, fighting with us. Our work does not culminate this Saturday with a march, however; this march is a call-to-action, our declaration that we are a movement and our important work is just beginning.

As youth activists, we have a voice. We’re speaking with our state representatives, senators, the attorney general, the governor, and others who have pledged to work with us for gun reform. For those that still refuse to act, there will be four million new voters in November who will be looking closely at the records of those politicians, asking why saving children’s lives isn’t their priority. It’s time to remind them that they should be serving the youth, their constituents and our country.

March for Our Lives Seattle will take place on Saturday, March 24, beginning with a rally at Cal Anderson Park at 10 am, which will be followed by a march to Seattle Center. Together, we will show our elected officials and our nation that we will not allow gun violence to continue destroying our schools and our communities, and we will demand action. This is an issue that affects all of us, and one we must come together to change. Will you join us?