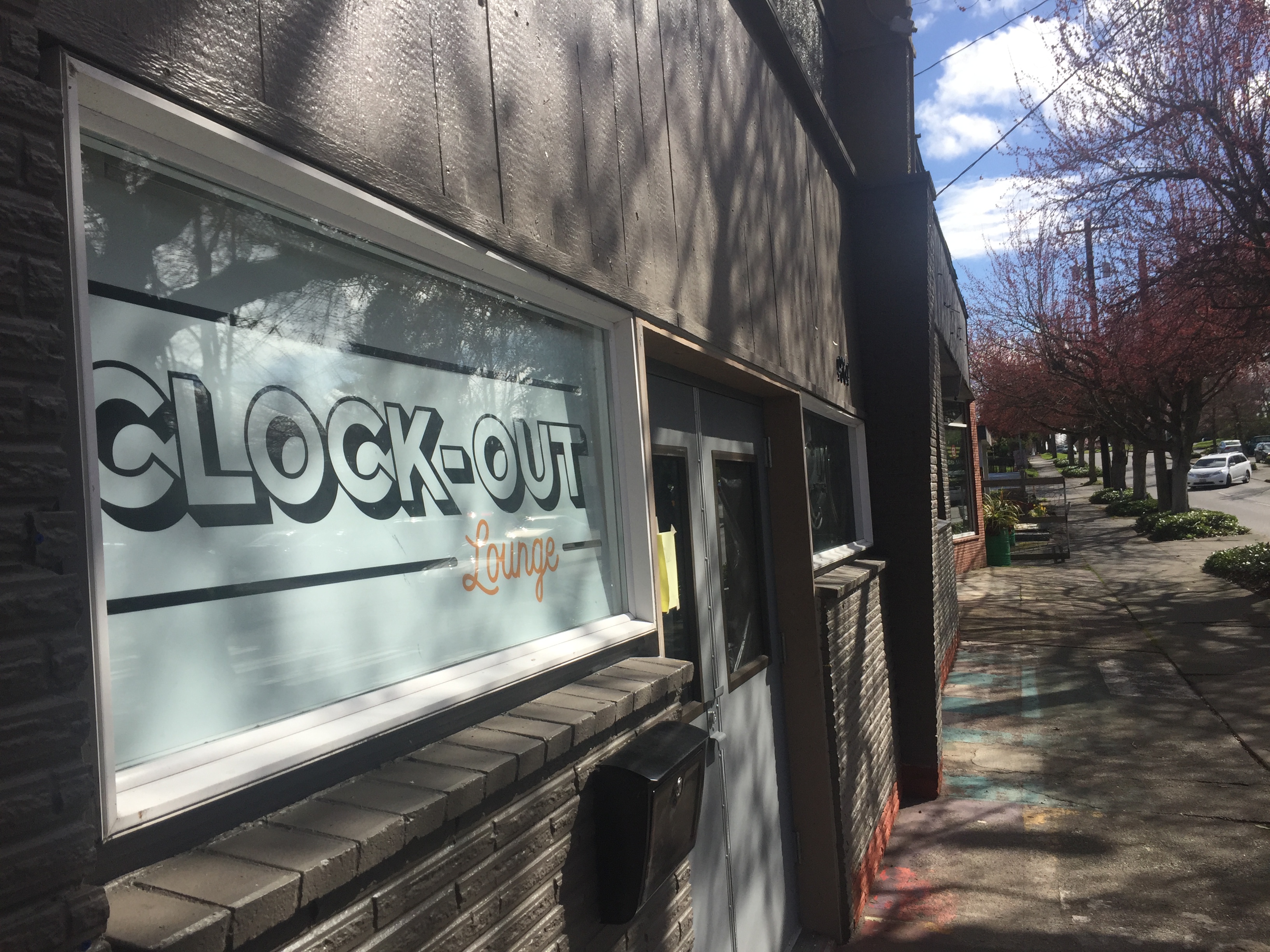 A faint sound of hammers bounces off a gold, sparkling curtain at the back of the room. It’s early afternoon on Beacon Hill and the Clock Out Lounge has two days until opening.

There’s a sense of optimism and bustle as folks move tables around, check wiring and stock the bar. Jodi Ecklund, co-owner, and operator sits in a booth by the window.

“We’re coming into the home stretch here. Opening night is Friday and we’ve got a lot to do,” Ecklund said.

Located at Beacon Avenue and Columbian Way in the former home of Monti’s Grill, between a fitness parlor and a Dim Sum restaurant, Clock Out exists equal distance between the Beacon Hill Station (to the north) and the Columbia City Station (down the hill south and east.) The spot is open from 4:00pm to 12:00 am, with minors allowed until 8pm. Ecklund says the intention is to serve as a bar, restaurant and live music venue, with shows Thursdays, Fridays, and Saturdays, and alternate programming throughout the week.

“We’re sort of easing into programming– we’ll have karaoke on Monday nights, and some DJs throughout the week, but we really want to see what the neighborhood wants,” Ecklund said. “We want the people of the neighborhood to help dictate what sort of spot this is.”

Dave Lichterman, owner/founder of Windy City Pie and founder of Breezy Town Pizza, says that they’ll be taking a similar approach with the food menu. Consisting of a mix of midwestern styles– Chicago and Detroit– the pizza will be served by the slice. He is enthusiastic about the venture, and clearly an expert with a love for pizza, but is quick to clarify that the food at Breezy Town is not a pet project.

“I want to cater to what folks in the neighborhood want, so we’ll definitely be evolving the menu as time goes on,” Lichterman said.

In talking to Lichterman, Ecklund and Denise Burnside, co-owner and operator with Ecklund, the recurring theme that pops up is that of serving the neighborhood. A longtime Beacon Hill resident, Ecklund noticed that the area was underserved in the dining and nightlife department.

“This became an idea near the end of 2016; I live here in the hood and I’ve always felt we were underserved for things to do. If you go up to Tippe Drague or The Oak, they’re full of people drinking and eating during the week, but when folks want to go out on weekends, they frequently leave,” Ecklund said.

Burnside concurred and added that the decision to have live music grew out of the initial conversations about possibilities for the space.

“Outside of the markets, there’s not a lot of food options right around here,” she said. “We were initially thinking we’d open a neighborhood bar, and when we saw the space, it was much bigger than we’d thought, so we said ‘hey, we should have music here.”

Much like the weeknight programming, the live music booking will evolve as the neighborhood makes its voice heard. Ecklund formerly booked for Capitol Hill venue Chop Suey, and said she wants the venue to feature a diverse roster of acts coming through the doors, with a focus on local music. One notable feature already is the stated mission to feature only three acts per bill to avoid the long nights and overcrowded bills that plague a lot of other local venues.

“I think there’s this idea that you can book more bands and then you get more people through the door buying liquor, but that rarely pans out. We want playing here to be a good experience for the artists,” Ecklund said.

Opening night was packed with both neighborhood folks and Seattle music luminaries, and one could overhear people commenting on the deliciousness of the pizza. On the Monday after opening, Karaoke was enough of a success that the bar stayed open past the stated 12am close to accommodate singers and partiers. So far, the spot seems to be fulfilling its mission statement.

“From the beginning, we wanted this to be a community space,” said Ecklund, noting that one goal is to keep things affordable. “We want to keep it pretty lowbrow and affordable– most of my friends are working class and can’t really afford to go out in Seattle anymore. We want Clock Out to be a place where people who maybe couldn’t afford to go out in other neighborhoods can do that here.”