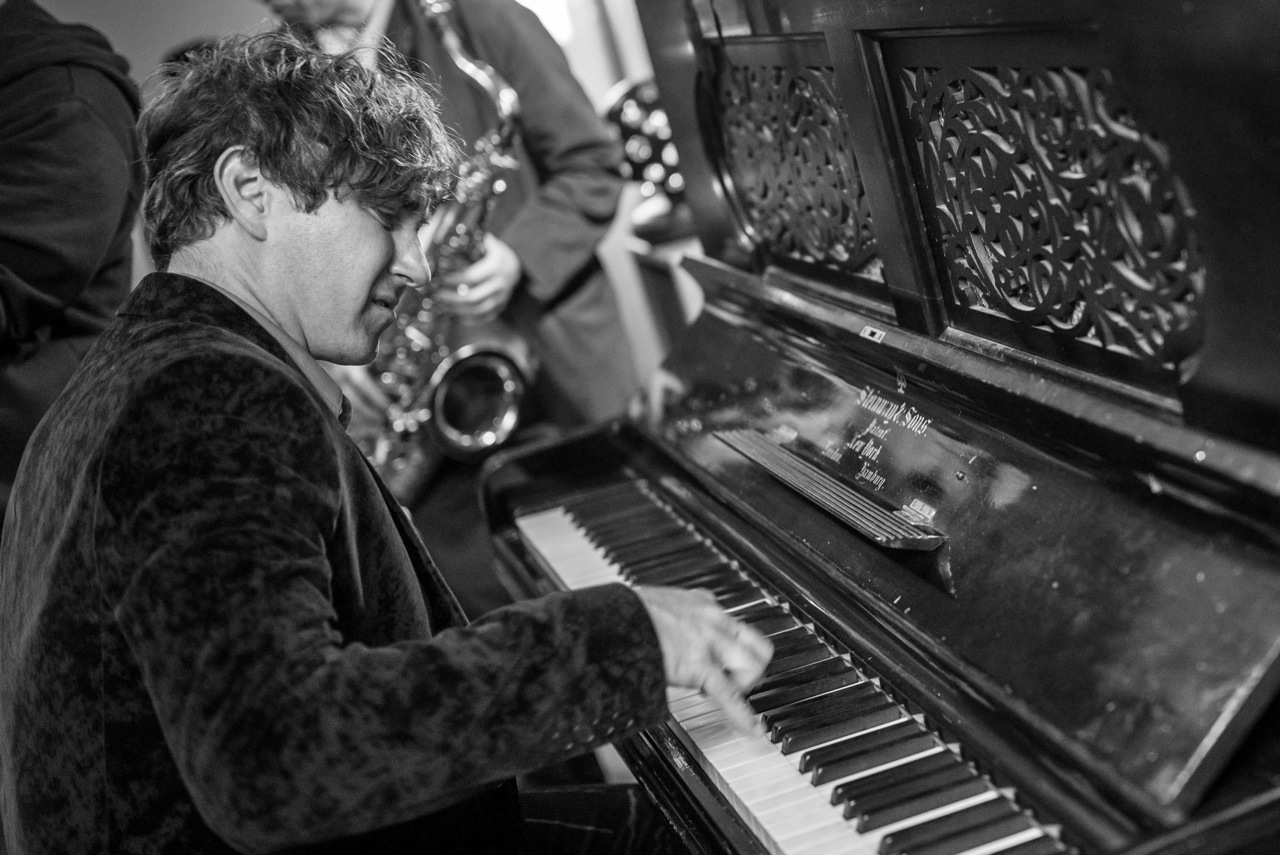 Critically acclaimed recording artist, Erik Deutsch, will be taking the stage of The Royal Room on Sunday night. In an effort to promote his upcoming album Falling Flowers, a homage to the funk-infused psychedelic jazz of the 1970’s, this New York-based pianist will be playing his own original compositions and arrangements, supported by an all-star cast.

Joining him will be a highly talented rhythm section featuring Greg Garrison on bass and Alwyn Robinson on drums. Both will be in town playing with Deutsch in the popular bluegrass extravaganza known as Leftover Salmon, on Saturday night at The Neptune. The hometown sax-hero Skerik and pop/country recording vocalist Victoria Reed will also be accompanying Deutsch in his Seattle debut.

Deutsch’s compositions seamlessly drift from bare and minimal to harmonically complex, walking the musical line, balancing avant-garde expression with fully formulated song structure. His percussive piano playing can consume the entire musical canvass, or take on a supportive role in the background, occupying only the utmost crucial sonic space.

Erik Deutsch talked with the Emerald about his upcoming  South Seattle performance.

Erik Deutsch: Well, I have played piano since I was six years old. Started with classical music, but was always a rock and roll kid, a blues, and r&b kid. That’s what I was into, it’s what my dad was into. And I got into jazz in high school, in the Washington D.C. area. That lead to college in Boulder, studying jazz and classical music. I shifted to jazz and that became the focus of my studies, but that was just a foundation for working as a professional in rock and roll, and experimental, and country, and pop, and all these things that I do to make a living as a musician.

GM: What is your favorite type of music to play?

ED: Well, I mean, I don’t know. I think when you are playing jazz music, which is a wide variety and that’s not even narrowing it down that much, but when you’re doing jazz, I think I get to use probably the most of my skill sets, you know? I really do enjoy everything, I enjoy the opportunity to work with different artists in different genres, and to really try to provide something. I don’t want to be a jazz guy who plays on some rock bands or country records, I really want to be good at each of those genres, I really want to fit in naturally.

ED: The truth is I listen to all the kinds of music that I play. It just depends on my mood. I’m kind of like a student of the history of music, in a way. I like to know about the greats in all the genres. So, if I’m like ‘yeah, I know about Bo Diddley, but I don’t know his records that much’ I want to know more, you know? And the same goes for like, The Animals, or Herbie Nichols, or Drums. Whatever I am feeling mood-wise is what I’m usually getting into at home, listening-wise. And I do try to make an effort to stay on the pulse of what’s new, and what’s happening in popular music and jazz music, and it’s harder the older you get, fewer of your friends are listening to brand new music is what it seems like. But my wife, Victoria Reed, she is a great songwriter and pop-musician and singer, and she’s been helping me to stay current with what’s going on in the world these days, and to try to stay on top of what’s happening out there.

GM: I saw that she is going to be playing with you on Sunday. Are you on a tour right now?

ED: Well, I am in the band, Leftover Salmon. So, we have a tour, a four-day run this week in the Northwest that ends in Seattle Saturday night at the Neptune. So, I am hanging around this extra night to do one of my shows. And it’s something that I do, and have done a lot in the past, kind of piggy-back off of other gigs I am doing, and do my thing. Because it’s not the easiest to just head out to Seattle, like you know, it’s my first time doing it, so it’s a rare opportunity that I get to head out to Seattle to play my music. But since we were in town, and I saw an opportunity to do something on Sunday, and Wayne Horvitz, it was really cool that he added the show on Sunday night. Obviously, I have Skerik in the band, and I have known him for a long time, starting with my days with Charlie Hunter. So, it’s nice to have Skerik on board, who is kind of like a Seattle legend, at least as far as I can tell.

GM: Yeah, He most definitely is. Who do you have on Bass?

ED: Greg Garrison. So, Greg Garrison and Alwyn Robinson, those guys play in Leftover Salmon with me. They’re fantastic. Greg was also a member of The Punch Brothers, and worked with Lyle Lovett, he’s fantastic. Greg is kind of the musical director of our band Leftover Salmon. And Alwyn Robinson is a really exciting young drummer, who lives here in New York City with me.

GM: Well whoever is going to be there Sunday night is in for a treat. What can we expect to hear on Sunday?

ED: Well I’ve got a new album coming out later this year called Falling Flower, it’s going to come out in September. What I’m doing with this album is kind of like paying tribute to classic psychedelic jazz of the 1970’s, kind of paying tribute to that with my own original compositions. Just like my career, you can expect a variety of psychedelic funky jazz music, and probably some surprises in there. When we get Victoria in the mix things take a different turn too.

This interview was lightly edited for clarity and length