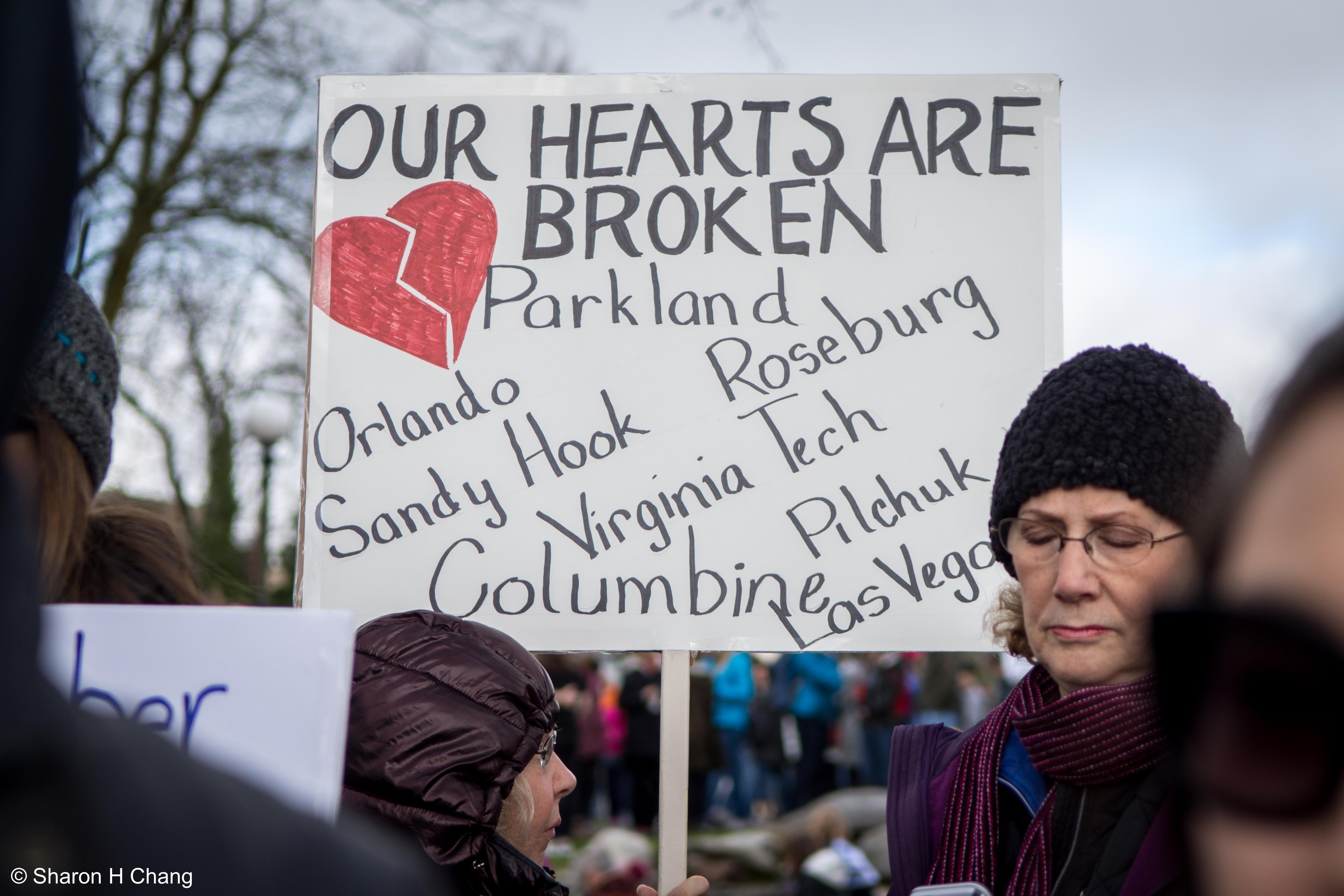 On March 9, 2018, Florida Governor Rick Scott signed into law a number of restrictions on gun ownership in that state. Earlier in the week, the state legislature had passed the bill to the governor. Within a month of the murder of seventeen students at Marjory Stoneman Douglas High School in Parkland, Florida had enacted some of the measures gun control advocates continue to recommend and demand.

Immediately, the National Rifle Association filed a lawsuit in federal court to overturn the new Florida regulations. NRA lawyers have called for a judge to block Florida’s new measures before they take effect.

On March 14, thousands of students, teachers, staff, and allies walked out of classes and off the job for seventeen minutes to remember the murdered Parkland students and continue the protest against gun violence.

The NRA responded to the walk out by tweeting the image of an AR-15 with the caption, “I’ll control my own guns, thank you.” The act was quickly derided online and off for what many critics saw as its ridiculously callous mocking of the grieving students, mourners, and participants.

On March 24, walks against gun violence took place at different locations around the nation. As the organizers stated, these demonstrations are not just political rallies, but constitute a “march for our lives.”

The pattern is clear. Repeatedly, we have seen discussion of gun violence and strategies for addressing it hampered and thwarted by gun lobby groups and gun sales associations. Even the limited measures such as those suggested after Parkland (and after the Great Mills High School shooting in Maryland) have been challenged before the conversation begins. Most often, the first and last argument against further movement on gun violence legislation is to cite federal, state, and local guarantees of gun rights.

If we are to move forward on this conversation regarding gun responsibility, then we must remove this hindrance to full, free, and open debate—the second amendment. In no way would repealing the second amendment equal repealing gun ownership across the country. Only three countries in the world have constitutional language favoring the right to bear arms—Mexico, Guatemala, and the United States, according to a November 2017 Business Insider article. Yet, citizens in Canada, South Africa, the United Kingdom, Japan, Pakistan, Jamaica, Panama, and many other countries still own guns. For the most part, their systems are well designed and highly regulated. Yet, private citizens who meet the local criteria may still arm themselves.

Here, I am not calling for the outlawing of guns in the United States; I am calling for rigorous debate and effective action, without the hindrance of the second amendment and the organizations that evoke their interpretations of it to halt the conversation.

I know it is extremely difficult to change the Constitution of the United States of America, and I am glad about that fact. Outside of a few highly regrettable flaws (such as the “punishment” clause of the thirteenth amendment) I think it is an important and valuable document in the history of nation-states.

Amending the Constitution to repeal the second amendment and open a full debate on the best ways to address gun violence across the United States would involve a significant two-step process that could take up to seven years to complete. The procedure is outlined in article five of the Constitution, and the timeframe was established by Congress after the ratification of the eighteenth amendment to the Constitution.

Seeing how much this process depends on the States to carry it forward, Washington state, certainly, could take a leadership position in this debate. Our state already has an open conversation about gun rights and gun regulations going as well as a record of balancing those two concerns with regard to our state constitution’s own article 1, section 24, which, rather than being absolute in its guarantees, grants and limits gun ownership and use. According to the Giffords Law Center,

Washington courts have held that the right to bear arms is not absolute and is subject to reasonable regulation by the state under its police power. The Supreme Court of Washington has repeatedly rejected article I, § 24 challenges to state and local firearms regulations. The Courts of Appeals have also followed this approach.

Our state has earned a score of B from the Law Center, which recommends several steps we might take to improve our ranking and further reduce our gun death rate. However, such a model for discussion as we have already developed could add momentum to the larger national movement to reduce gun violence and push us toward a free and unencumbered debate about the path ahead—a path often barred by references to the “protections of the second amendment.”

My proposal is not a unique one. In 2013, the editors of America magazine proposed repealing the Second Amendment for reasons similar to mine. “The Supreme Court has ruled that whatever the human costs involved, the Second Amendment ‘necessarily takes certain policy choices off the table,’” write the authors. In response, they ask if we have not given up too much of our ability to protect ourselves and if it is not time to reclaim our right to act on our own behalf.

Similarly, in 2017 Bret Stephens, writing in the New York Times, claimed there is only one way for “Americans who claim to be outraged by gun crimes” to take control of the changes they want to see enacted: “Repeal the Second Amendment.”

Last month, Stephens returned to the topic after the Parkland mass shooting. “We need to repeal the Second Amendment because most gun-control legislation is ineffective when most Americans have a guaranteed constitutional right to purchase deadly weaponry in nearly unlimited quantities,” he asserted in the New York Times again.

Other appeals for repeal have appeared in Rolling Stone and Vanity Fair.

Thus far, in 2018, the United States has experienced 49 mass shootings, resulting in 3,178 deaths and 5,559 injuries, according to the Gun Violence Archive. That is an average of one mass shooting every 1.6 days. If we continue at this rate, we will have to multiply those numbers by more than four before the year’s end.