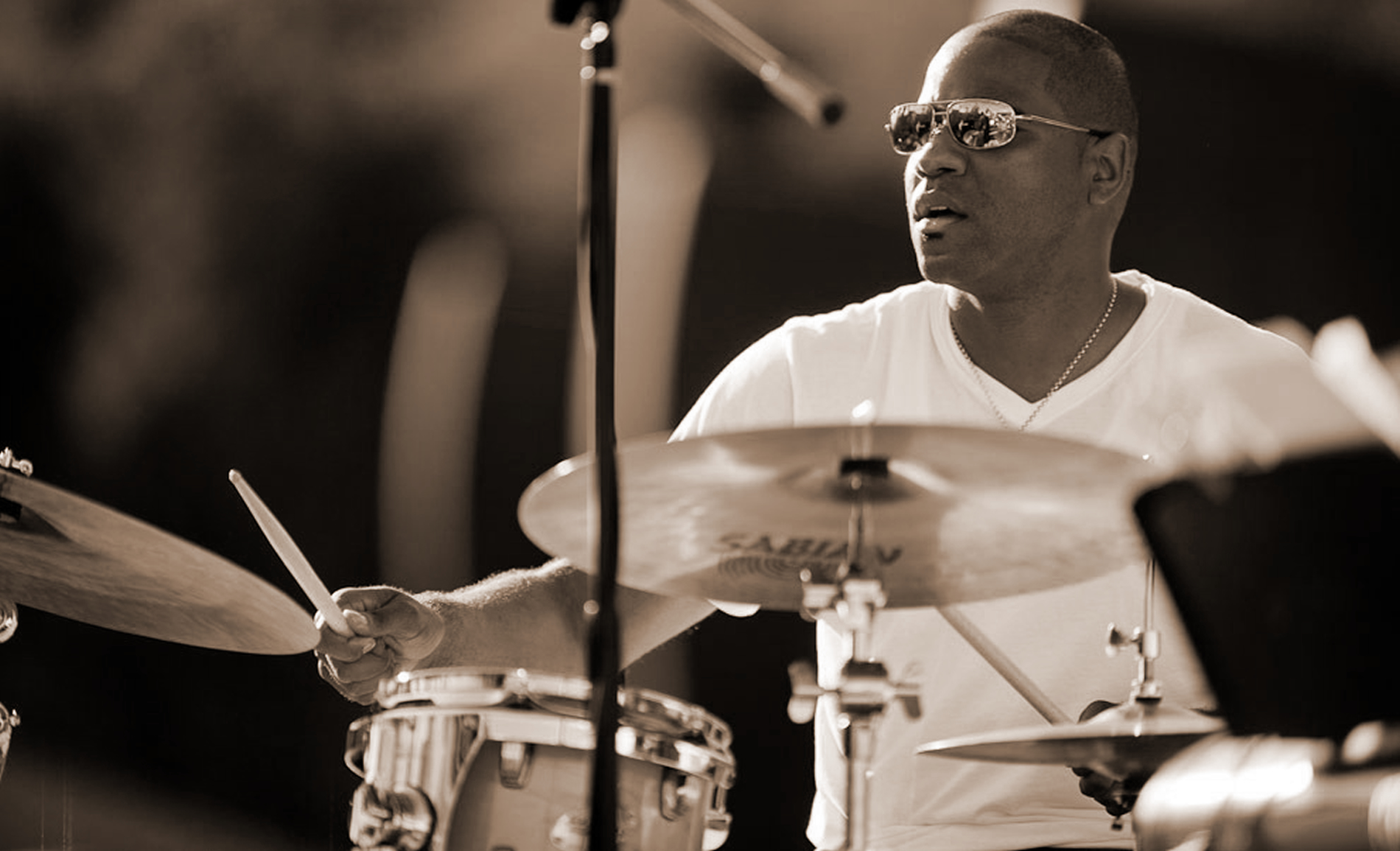 Fourth generation Seattle musician, D’Vonne Lewis, is a highly in demand jazz drummer and successful bandleader, who has accomplished a great deal in a span of fewer than two decades. He began gigging professionally as a teenager, quickly earning himself the reputation as one of the city’s best drummers.

From sitting in with jazz legends like Wynton Marsalis, Julian Priester, and Marian McPartland, or recording and performing with established hip-hop groups such as Digable Planets, Blue Scholars, and Macklemore, his musical accolades are vast beyond his years.

Now a seasoned veteran at the young age of thirty-four, D’Vonne Lewis has proven himself to be a pillar of the thriving Northwest jazz scene, as he continues to carry his reputation as a great musician proficiently and proudly.

You can catch D’Vonne Lewis playing with Seattle’s own Evan Flory-Barnes, and New York based pianist Brittany Anjou, in the Brittany Anjou Trio, this Tuesday at The Royal Room.

D’Vonne Lewis spoke to The South Seattle Emerald about his musical upbringings and family history.

Gus Marshall: Where did you grow up?

D’Vonne Lewis: Born and raised here in Seattle, WA. I spent a lot of time with my grandmothers in South Seattle, like Rainier Beach, Skyway area, I had a lot of cousins over there. Me and my mom we were in Wedgewood area, then we moved to Green Lake area and I went to Roosevelt High School.

GM: What year did you graduate?

GM: Did you play in the Roosevelt Jazz Band?

DL: My freshman year, I feel like I was a good listener, but I didn’t know how to read to well, so the first year I was put in the vocal jazz band, which was cool, good training. So, I was in vocal jazz band and that was with, she’s pretty big now, Sara Gazarek, it was a great experience being in vocal jazz band, fun too, you know, you were around all these girls (laughs). Then in sophomore through senior year I was in jazz band. I wanted to go to Garfield, but they had so many drummers, I was like, ‘ah man, I ain’t gonna be able to get in there’.

GM: How long have you been playing music?

DL: When I was like 3 and 4 years old I would bang on the pots and pans. Music was always around my house. My mom would clean and be bumping soul, or R&B, or reggae, you know, just part of the household and then I started playing along to those songs that she would play, on pots and pans. Then I got my first drum-set when I was about 8, yeah. I have just been playing ever since, practicing in the basement, just being down there for hours just playing with the records. I didn’t really get into jazz until middle school. Because that’s when you join a band where you can play the drum-set. So, I was like ‘oh, jazz? Ok’, so I just started listening to a bunch of jazz records.

GM: You have something like a musical family dynasty. Can you give me a little family history?

DL: My great-grandfather, my grandfather’s dad, they all moved up here from Texas, probably, I want to say whenever Boeing started because he came to work at Boeing. He was a guitar player also, I don’t think he gigged too much, but then he got pretty-well known around the neighborhood in the Central area, as a good guitar player. Kids and other musicians would come to his house and he would give theory lessons. My great-grandmother, his wife, she was like the top organ player in churches around that time. So, my grandfather, their child, he grew up playing piano from his mom, but then later changed to organ. His brother, my great-uncle Eulysses, he used to own the Paramount in the 80’s, booking acts and all that. So, my grandfather he was the one who kind of, took it places. He grew up with all those guys, Barney Hilliard, Jojo Hansen, and when Jimi Hendrix was little he used to come to the house and take guitar lessons with his dad. And then later he used to come to my grandfather’s gigs when my grandfather was young and had his own group, Jimi used to come and sit-in. So, at first, he was just playing the black clubs.

GM: Up on Jackson?

DL: Yeah, Jackson, Madison, you know they couldn’t go past Madison, I think.

GM: That was the redline.

DL: Yup. So, one day this white guy came by, this younger white guy, and he’s like ‘Hey man you should come play up in the North End. My grandfather was like ‘If they let us’. What the white guy was going do was going to just book them and not tell the club owner what color he was. So, they get to the gig a few months later and my grandfather is setting up, and the owner is like ‘Hey man, you can’t be here’, and then I guess he just started to play right there. And the owner was like ‘Ok, can you hold it down for a few hours?’, and he said ‘Yeah’, and he became the house band.

GM: Where was that club located?

DL: I want to say Aurora. So, he was up there and started getting a lot of good gigs, like white establishments. He was one of the first to play in white clubs in Seattle.

GM: What was his name?

GM: You are the number one guy to get called in to play with A-list touring artists when they come to town. When did you decide you wanted to be a professional musician?

DL: I hate to say this, but the first time I got an outstanding soloist award, to realize you can get recognized for your playing. And going to those clinics during festivals with other drummers like Elvin Jones, I was like ‘WHAT? He played with that guy John Coltrane! You know, he’s on that record, and he’s still drumming!’. I would ask those questions like ‘How did you get here?’, and he would say ‘they flew me out’, or ‘Who brings your drums?’. You know, I didn’t know that like this is your life. So, I was like ‘WHAT!’. Back then he had like a bunch of guys that would ship them for him. And I didn’t realize that, it was like that. You can make a living, you can travel. So, around that time I was like ‘I’m gonna keep doing this’. And the award it helped, I was never one to be like, oh, you know, trying to get it. I was trying to be humble about everything. It was cool to be recognized but I was mainly like ‘I wanna do this for my life’. You get to have this much fun and play in front of people, and bring joy, and travel all over. It’s like ‘Man, I wanna do that’. That was probably all in like 7th grade. And then my grandfather passed away when I was in 8th grade. And nobody in my family really told me how much of an impact he had, how he was one of the first pioneers for desegregation. So, reading his little eulogy I was like ‘He was well known around Seattle, the Northwest’. He had a couple hits. So, then I was like ‘Oh, this is in my family’.

Featured image courtesy of the artist