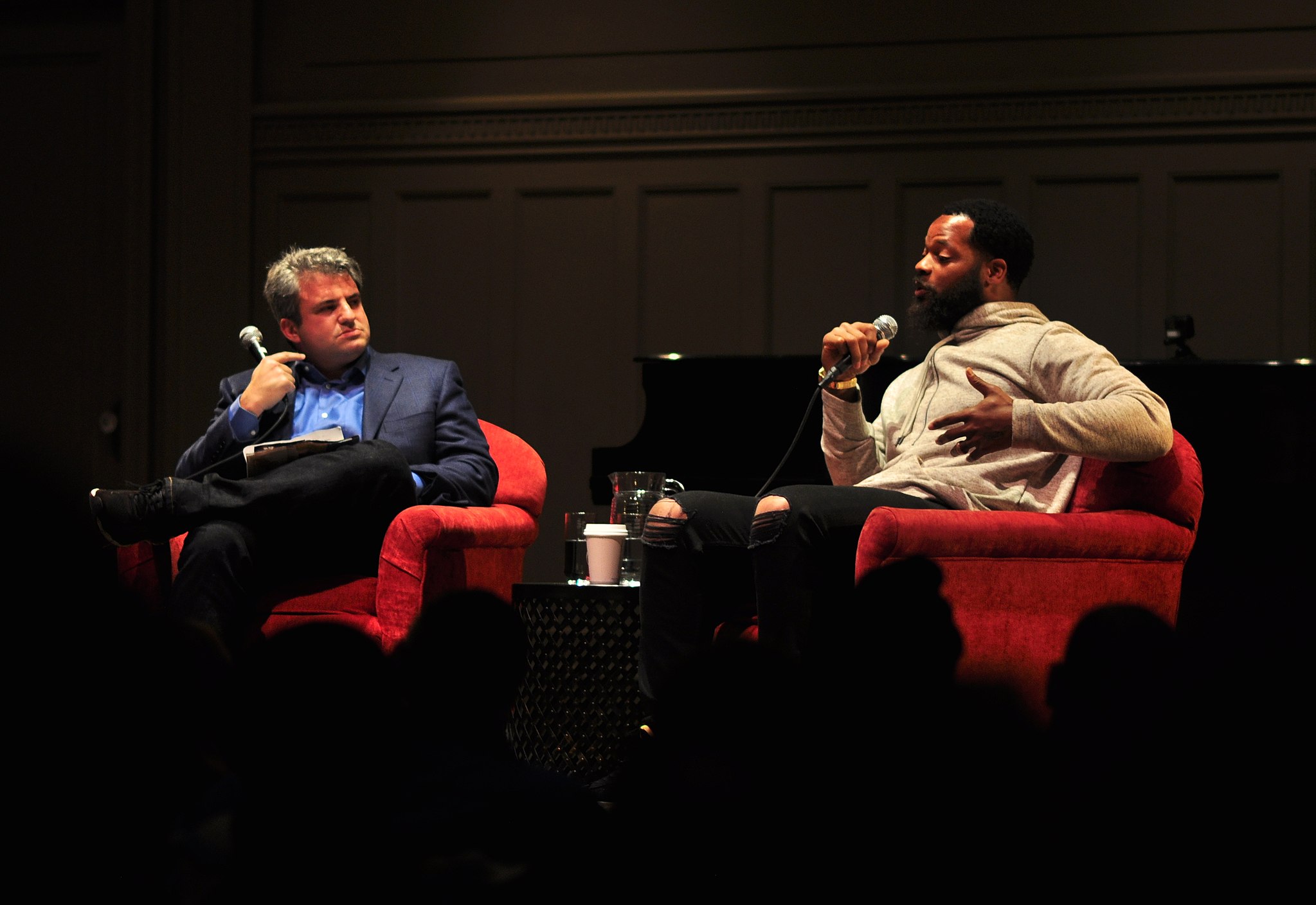 I am going to assume my position as a teacher here and officially assign you homework: read this book! Take notes. Report back on it to your community. Then take action. It is indispensable for anyone who wants to understand why so many players today are refusing to just shut up and play and are creating the new national pastime of protest and play. But this book is much more than just an expository essay about the new Black athlete.

This is one of those rare books you read that will change the way you understand yourself and your place in the world. Only a few books have had that kind of impact on me. Books like The Autobiography of Malcolm X and Angela Davis: An Autobiography. Uncomfortable has me feeling like a kid again, remembering how those amazing autobiographies turned me upside down and inside out.

These have been the rare books where the authors have fully exposed their souls to the world, and in that vulnerability allowed me to confront my own deepest fears. These have been the books that helped me to see that I’m not alone, that others have suffered from racism, oppression, isolation, feelings of inadequacy, and have turned that pain into a powerful force for good in the world.

I too have felt the anxiety that Michael describes that comes from confronting power—and seeing that it’s okay to talk about it publicly was liberating. He writes, “It’s harder than they warned you: the anxiety will scratch at your insides like the creature in Alien, except it never bursts out of your chest, it just stays there, scratching.”

Uncomfortable, like the great autobiographies of Malcolm and Angela, has helped me understand the meaning of dedication. Michael writes, “The more success you have, the more you hear a voice suggesting sweetly and seductively to rest on those laurels and just skip it or dog it, go half-assed. That voice asks you, ‘Why are you working that hard? You got it!’ But to be great, you have to continuously put yourself in the mindset where you don’t got it. You have to think about the times you were hungry, you were struggling, you were a kid being pushed around.”

And Michael takes this attitude both into the gym and around the organizing table: “Whether I die tomorrow or in sixty years, if the only things about me that people talk about are the Pro Bowls and the Super Bowl appearances, I will have failed. I want my legacy to be what I did in the community and the positive changes this work might have created in people’s lives.”

I can tell you from having worked closely with Michael over the past couple of years, he has walked this talk over and over again. I have been with Michael as he sat with youth listening to their perspectives on the movement for Black lives and their perspectives what needed to change. I have seen him support the Black Lives Matter at School movement. I have seen him speak at the Locker Room Talk forum at my high school where he took on the responsibility of athletes to speak out against sexual harassment, relationship abuse, and violence against women. I have seen him give a young student activist the Black Education Matters award. I have seen him sit down with the family of Charleena Lyles, a pregnant Black mother of four who was killed by Seattle police, and organize a rally and benefit for her family. I was there when Michael brought the Freedom School program to the Seahawks training camp and exchange ideas about the struggle for equitable education.

True, Michael has been one of the most visible leaders in this massive upheaval of athletes around the country who have protested for racial justice during the national anthem. But what you will learn about in this book is that Michael is just as committed to the struggles for women’s empowerment, Palestinian rights, LGBTQ rights, and human rights—and he applies the framework of intersectionality to understand how multiple oppressions can overlap to create deep and complex forms of injustice: “Intersectionality clicked for me when I thought about Charleena Lyles.

She was killed because of racism, no doubt, but her life as a Black woman—not just a Black person—is critical to understanding her death. Charleena had suffered sexual assault and violence, and she called the police in the first place because she was worried that in abusive former lover was coming back to hurt her.”

Uncomfortable will teach you that if you have truth on your mind, you can go ahead and just say it, unfiltered: “Being born Black is a preexisting condition in this society, with a set of stressors that you can’t understand without living in our skin. It’s not just the fear that you’ll be the next James Byrd or Trayvon Martin or Sandra Bland. It’s hearing dumb shit in school about America being the land of the free and having to speak up to remind my teacher of slavery and seeing all the faces change expression, from getting red with anger to others rolling their eyes, with looks of relief on the faces of people who had been thinking the same thing. I felt like Kevin in The Wonder Years, if Kevin had been Black and had to face an ass-whupping every day for trying to tell the truth.”

Uncomfortable will teach you that we can talk openly about the many forms of trauma we face. Writing in a chapter about the unpaid labor of student-athletes and the NCAA racket, Michael writes, “I think PTSD in players also results from a loss of identity. Little by little, we conform to what our coach wants, what the program wants, what the academic advisor wants us to study so we stay on the field and bit by bit, chip by chip, we lose the foundation of where we are. We get stuck in a character. Then it’s all over, and the PTSD becomes a sports version of postpartum depression.”

And it will teach you that it’s okay to laugh out loud as we fight hard for justice: “Part of the mythology of sports is people think it breaks down barriers and makes us more equal. That’s miseducation…It’s going to be people realizing that we’re all human: everyone takes a shit and everybody pisses. Some of us sit, some of us stand up, some of us have colostomy bags, but other than that, we do it exactly the same way.”

Finally, Things That Make White People Uncomfortable will teach you that it’s okay to ask the biggest questions about how our world is organized. Michael writes about his trip to Haiti with his Haitian teammate Cliff Avril and says, “it reminded me of being young and asking my mother, “Why?” As in, Why does the world even have to be like this? If you don’t ask why you’ll never be attacked or criticized. No one is going to go after you or your family. But if you don’t ask why, nothing, not a damn thing, is ever going to change.”

Whether you are a football star, or a teacher, or a student, or locked up, we can all ask the questions that cause discomfort—and also produce the change that is so desperately needed.

Jesse Hagopian teaches Ethnic Studies and is the co-advisor to the Black Student Union at Garfield High School–the site of the historic boycott of the MAP test in 2013.  Jesse is an associate editor for the social justice periodical Rethinking Schools is the co-editor for the forthcoming book, Teaching for Black Lives, and is the editor of the book, More Than a Score: The New Uprising Against High-Stakes Testing. He is founding member of Social Equity Educators (SEE), a recipient of the 2012 Abe Keller Foundation award for “excellence and innovation in peace education,” and won the 2013 “Secondary School Teacher of the Year” award and the Special Achievement “Courageous Leadership” award from the Academy of Education Arts and Sciences.

One thought on ““Things That Make White People Uncomfortable”: Michael Bennett’s essential new book asks, “Why does the world even have to be like this?””