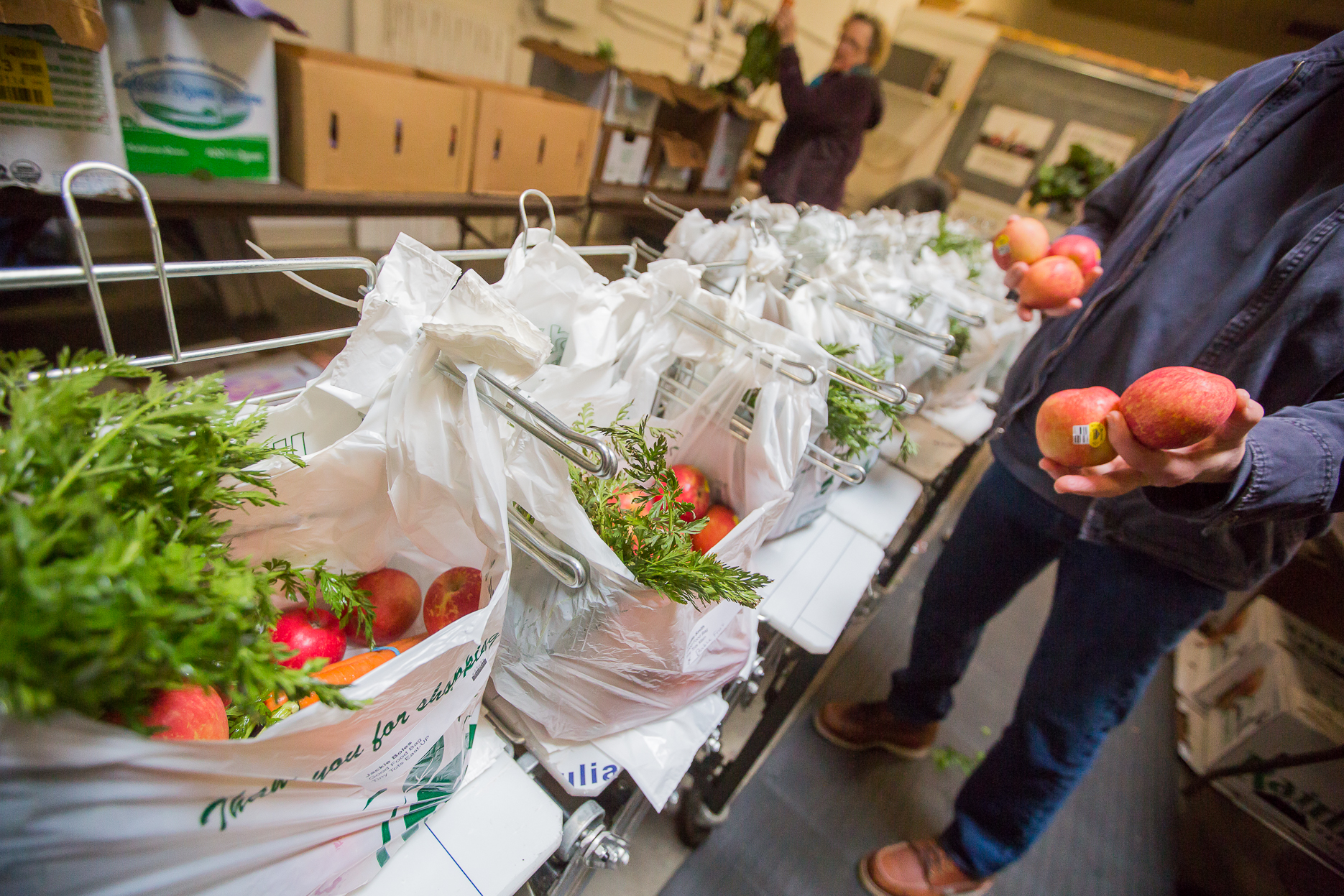 “Isn’t it beautiful?” volunteer Miki Willis says of the lush rainbow chard she carefully packs into a plastic bag. It’s one of many she packs that morning, helping her fellow volunteers to ready the bags for weekly distribution to various Good Food Bag pickup sites.

Willis and a handful of other volunteers weekly pack bags for the program, which provides economically disadvantaged families and individuals with a bag of fresh, organic produce every Thursday at different distribution sites throughout Seattle, Washington. It also works with Meals on Wheels to distribute produce bags to homebound seniors.

One such distribution site is the Tiny Tots Development Center in Rainier Beach, which acted as the first site when the program began in partnership with the center about six years ago. The center is an early learning, preschool, and childcare center that cares for children up to 13 years old.

While Tiny Tots still serves as a major distribution hub, the program is now headed up by Tilth Alliance, a community-based organization that focuses on helping organic farmers bring their produce to and educate the Seattle community. Created in 2016, the organization is the result of the merger of Seattle Tilth, Tilth Producers and Cascade Harvest Coalition.

Tilth Alliance Food Hub Manager Skye D’Aquila said the program specifically works with socially and economically disadvantaged farmers, in an effort to benefit more than just the food’s recipients. The program is expanding its horizons, too. Last year, the Good Food Bag program partnered with the City’s Fresh Bucks To Go program, which was an effort by the City to offset some of the harm the newly-enacted sugary beverage tax some say will disproportionately affect low-income families. The City’s program is meant to put revenue created by the tax back into affected communities.

Partnering with the City was a good move for the program, D’Aquila said, because the partnership has significantly increased the program’s distribution. Last year, she said, the program distributed more than 10,000 bags to 34 preschool sites, far more than in the program’s first year.

It’s also a great way to educate children about what they are putting in their bodies, and encourages them to spend time and talk about food and farming with their families, D’Aquila said. Each bag has several pieces of one kind of green, two other types of vegetables, including a hearty root or starchy vegetable, and one kind of fruit, all of which help to introduce children to new foods.

“This one parent who sent an email said her daughter felt empowered by the bag, and felt a sense of ownership over the bag, and … she had been trying to get her daughter to eat kale for years, and when there was kale in the bag, she said, ‘Oh, I brought this home from school, of course I am going to eat the kale!’” D’Aquila recalled.

“I look forward to my bag every week, and it’s reasonable – it’s only $5 [per week],” Carter said. “Some of my family are able to use their EBT cards, so that works out nice.”

She added that, at an average grocery store, $5 would get you “maybe two things, at the most.”

“At Safeway, for two onions and a cucumber or something, it’s over a dollar … it’s expensive. A head of lettuce is almost $2, so you can’t even talk about a tomato to go with a nice, little salad,” Carter said. “And then, on top of that, organic food is even higher.”

Each bag comes with recipe cards and produce introduction cards, too, Carter said. So far, the most interesting vegetable she’s cooked has been broccoli rabe, but her favorite vegetable is rainbow chard.