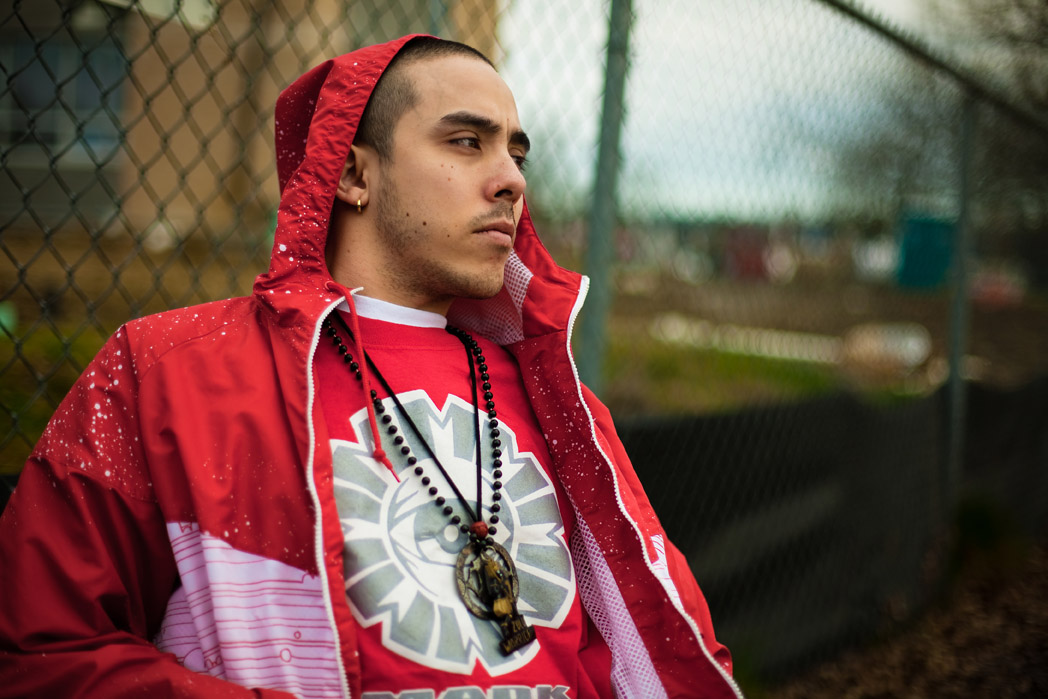 King Khazm has been an important fixture in Seattle hip-hop for decades. An emcee, visual artist, cultivator of culture, mentor and organizer, Khazm, who uses a wheelchair, is one of the most visible people in the Emerald City’s South End creative community.

After releasing his 2016 LP, Diaries of a MAD, which took about a decade to create, Khazm is in the process of releasing new music videos for the record’s tracks. Amidst all this work, he continues to travel and give talks about art, history, and community organizing along the west coast and abroad. Before his next jaunt, we thought it would be good to catch up with the artist and see how he got to be where he is today.

You have a new animated video that you’re going to release for the song, “Excel.” How long have you been making visual art?

I’ve been drawing and doing graffiti since I could first hold a pen. That was my first element [of hip-hop]. As a kid, that was really my saving grace. I got into music a bit later, poetry in middle school and emceeing later in high school. I worked with Dume41 on the animation. I did the storyboards and illustrations and we worked together on the animation aspect of it. But what inspired me was that the whole album is about perseverance while having a sense of hopelessness. How all these difficult things compounded in my life, yet I had a sense of determination that I was able to pull through. Even though the album Diaries of a MAD is somewhat bleak, to excel is the underlying theme.

In the song, “Excel,” you say, “I was chosen for this moment.” Can you unpack this thought?

It’s about coming to the heightened awareness that all these struggles in my life are necessary for my growth. All the great things that manifest in order for me to excel into leadership and be able to be an organizer in the community are, in hindsight, determined by the struggle. And now I know that this is the time to mobilize all these ideas, which have been building up over the years.

Can you be a bit more specific about what these “ideas” are?

Ideas in terms of just building a movement through hip-hop and the community. I’ve always been into the arts. I’ve always been an advocate for those marginalized in the community and the hip-hop community. And just having a heightened awareness and the sense that this is our time. It’s bigger than just entertainment. It’s about liberation and freedom – not just for me, but for my peers.

Your video for “Dear Diary,” which came out a few years ago, is very personal – showing you writhing, with a hood over your face, and very serious scars all over your back. Why did you want to let your audience in so closely?

The album Diaries of a MAD was conceived initially in 2004 and it was a very personal project, very introspective. It touched upon a lot of things that I don’t usually talk about in my music – like disability and my Japanese ancestry. It had a lot to do with identity, a lot to do with my upbringing. That album was a real conceptual project. I conceived of it in a hospital while bedridden for seven months. I was in a deep depression. I didn’t know where things were going. The album took over 10 years to see into fruition and a lot of that time was my own inability to open myself up to be out there.

What happened over the next ten years, or so?

A lot of things started to happen. I founded 206 Zulu, began traveling and organizing. But the producer I was working with said, in 2015, if we didn’t buckle down and finish the album, he had to move on. That made me wake up and realize I had to overcome these barriers. And I began to realize the biggest barrier to it was me.

Speaking of being very busy, you’re currently working with folks on a documentary about your life. Can you give us a window into what that film will be about?

It’s a short documentary, produced by Elliat Graney-Saucke, that’s going to be a part of the Seattle International Film Festival. It’s a short film on my story, my upbringing, my background and the different types of arts I’m involved with and how I got into community organizing and working with 206 Zulu and Washington Hall.

You’re often asked to travel and speak at events. Not everyone gets these sorts of invitations. How did this start?

I’ve always been the big homie in my circles. I’ve always been about sharing my knowledge and learning from each other. So, it was a pretty natural evolution to becoming a teaching artist and going to a lot of different schools – high schools and colleges – speaking on different topics. Like about hip-hop history and how it’s evolved over the last 40 years and, more specifically, northwest hip-hop. It’s grown to speaking about other things, whether that’s media consolidation, the teen dance ordinance, police brutality. I started the 206 Zulu Chapter in 2004 and our organization has become a model to a lot of other groups. We’ve established a lot of other Zulu Nation chapters around the world. Because 206 Zulu has been on the forefront of progressive events, we’ve helped mentor a lot of other organizations and chapters around the world.

You have a lecture coming up April 26 at the Seattle Black Panther Party 50th anniversary. Can you give a little insight into the theme of that talk?

I’m going to be on the hip-hop and activism panel, delving into the intersection of how hip-hop inherently is activism. How it’s a platform to mobilize efforts to engage people politically. And how in our community we can use entertainment as a lens to dig deeper into issues and how we can utilize that to mobilize people to make change.

Why is “organizer” an important part of your creative mission?

Organizing is the 5th element of hip-hop. It’s the knowledge aspect, the fabric that ties all the elements together. As an organizer, there’s a big spectrum – from artist management to running a label. But in terms of the community, it means coordinating programs, events, rallying people around different issues and causes, different charity events, raising funds.

You’ve worked with some of the biggest names in hip-hop. From Jake One to Vitamin D. Yet you often focus on youth empowerment. Why is this important?

Youth empowerment is important to me because it’s our future. I feel that no matter where I’m at in my journey, no matter how much success, it’s always going to be important to realize where we’ve come from and to be able to give back to the community and to young people who are going to be our future leaders. It’s really important for me to nurture that. I wish I had more big homies growing up. If I had somebody that could look out for me, especially when things were crazy, like in the 90s with gang tensions and violence, having a voice of reason as a mentor to help guide me through certain things would have been great. It’s important to be there for young people and help them create their own self-determination.