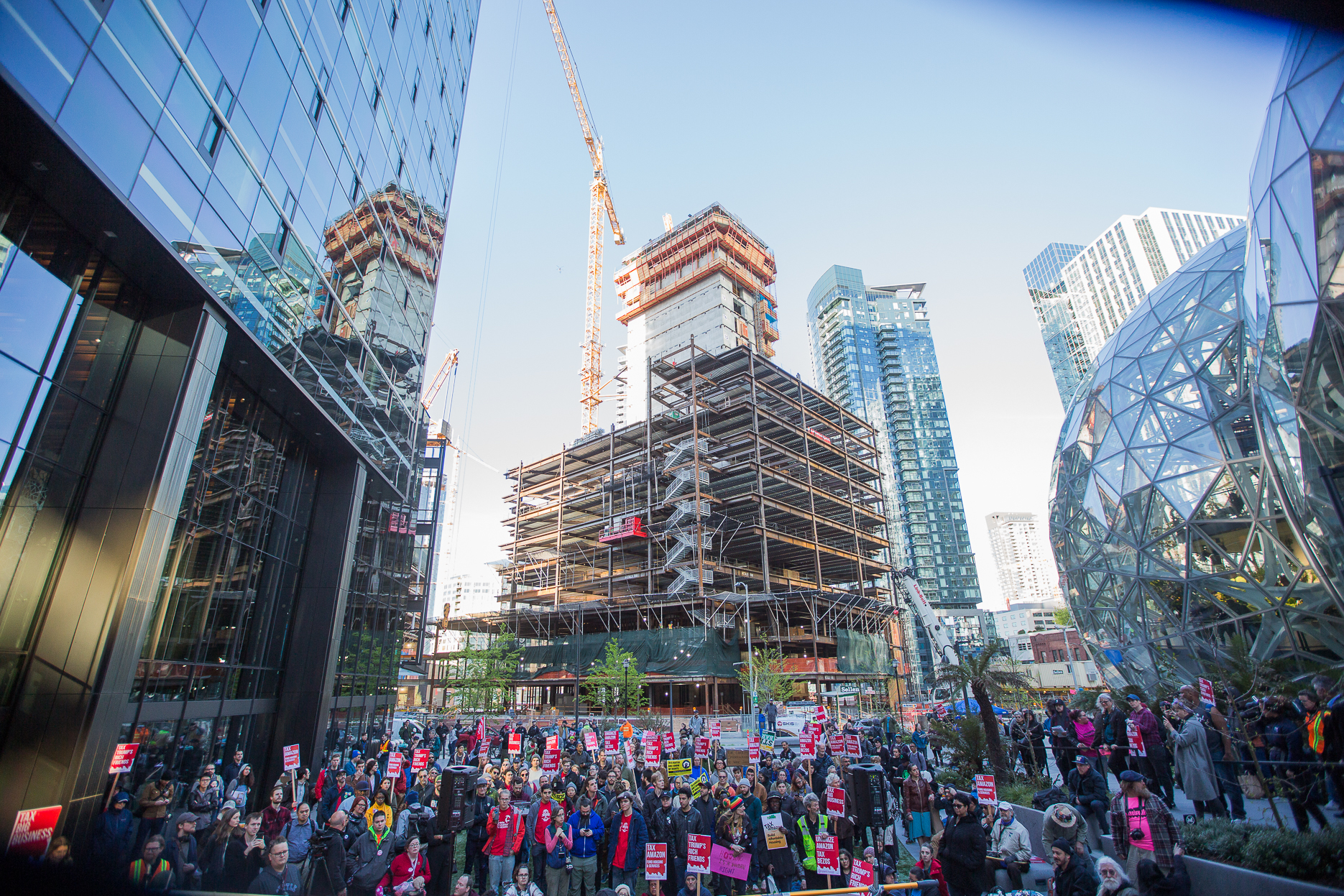 That  Amazon, the largest Internet-based retailer in the world, made $5.6 billion in profits last year, and paid no federal income tax – and, thanks to the recently enacted tax laws, projects a $789 million tax return this year – may no longer be dominating headlines, but it’s on Seattle City Councilwoman Kshama Sawant’s mind every day.

Alongside eight different organizations, the councilwoman led a group of about 200 protestors, who gathered at The Spheres, Amazon’s bulbous conservatory and employee workspace, in downtown Seattle Tuesday evening to demand that just a fraction of the international shipping behemoth’s money go towards building affordable housing in Seattle.

“Housing has become insanely expensive for most working people in Seattle,” Sawant said in a phone interview, before the protest. “It has gotten to such a stunning rate of unaffordability that even people who would otherwise consider themselves middle-class are now struggling to maintain a foothold in this city.”

Protestors on Tuesday asked the city to impose the Employee Hours Tax (EHT) on Amazon and other corporate giants at a rate that would help bring in $150 million in revenue, to build 750 units of affordable housing per year. While that number barely scratches the surface of what the city needs, Sawant said, the number is one proponents of EHT believe may help them have a reasonable chance of winning city support.

This March, according to the Northwest Multiple Listing Service (MLS) the median recorded price for a single-family home in King County was $689,950, a 15 percent jump from $599,950 last year. Going just outside the city isn’t likely to help, either: the MLS report showed Snohomish County’s median home price was $475,000 this year, up $50,000 from last year. The lowest median home price, sitting at $155,000 was in Pacific County, about midway between Seattle and Portland, Oregon – but, even then, that recorded figure shows an almost 11 percent jump, up from $140,000 just last year.

Sarah, a tech worker and member of the Socialist Alternative, who rents her home in Seattle, put the numbers a different way in her address to the gathered crowd: “a deep crisis of housing scarcity.”

“I have lived in this city my whole life, and it has gone from a place where you could raise a family, and where students and artists could live, to one where no one remembers what it means to feel housing secure,” Sarah said. “The money is there for massive investment and permanently affordable housing.”

When they talk about affordable housing, Sawant said, they don’t just mean for people who are homeless. They mean those who make the city run, from public school teachers to garage attendants to cashiers at Safeway – “you name it, and people in that profession are on the chopping block, as far as housing prices are concerned.”

And being on the chopping block, she said, doesn’t mean these people face being priced out of living in the city. It means they are priced out of being able to live in a stable home altogether. Sawant cited a Journal of Urban Affairs finding, which used 2009 Housing and Urban Development data that showed a 15 percent increase in homelessness in metro areas, and a 39 percent increase in homelessness in suburban and rural areas for every $100 increase in median rent.

“More and more people are being forced to live in their cars. We are seeing homelessness rates go up for students in the Seattle Public Schools … and then we are also seeing seniors [on fixed incomes] being impacted,” Sawant said. “This is now a problem that is spanning generations.”

But Sawant said she and others who are pushing for housing reform aren’t getting the support they want from the city’s elected officials, or from Jeff Bezos, Amazon’s CEO.

“That is why we aren’t relying on committee meeting after committee meeting in City Hall chambers. We are organizing on the street,” she said. “I’ve said enough publicly that if Jeff Bezos wants to contact me, he’s welcome to.”