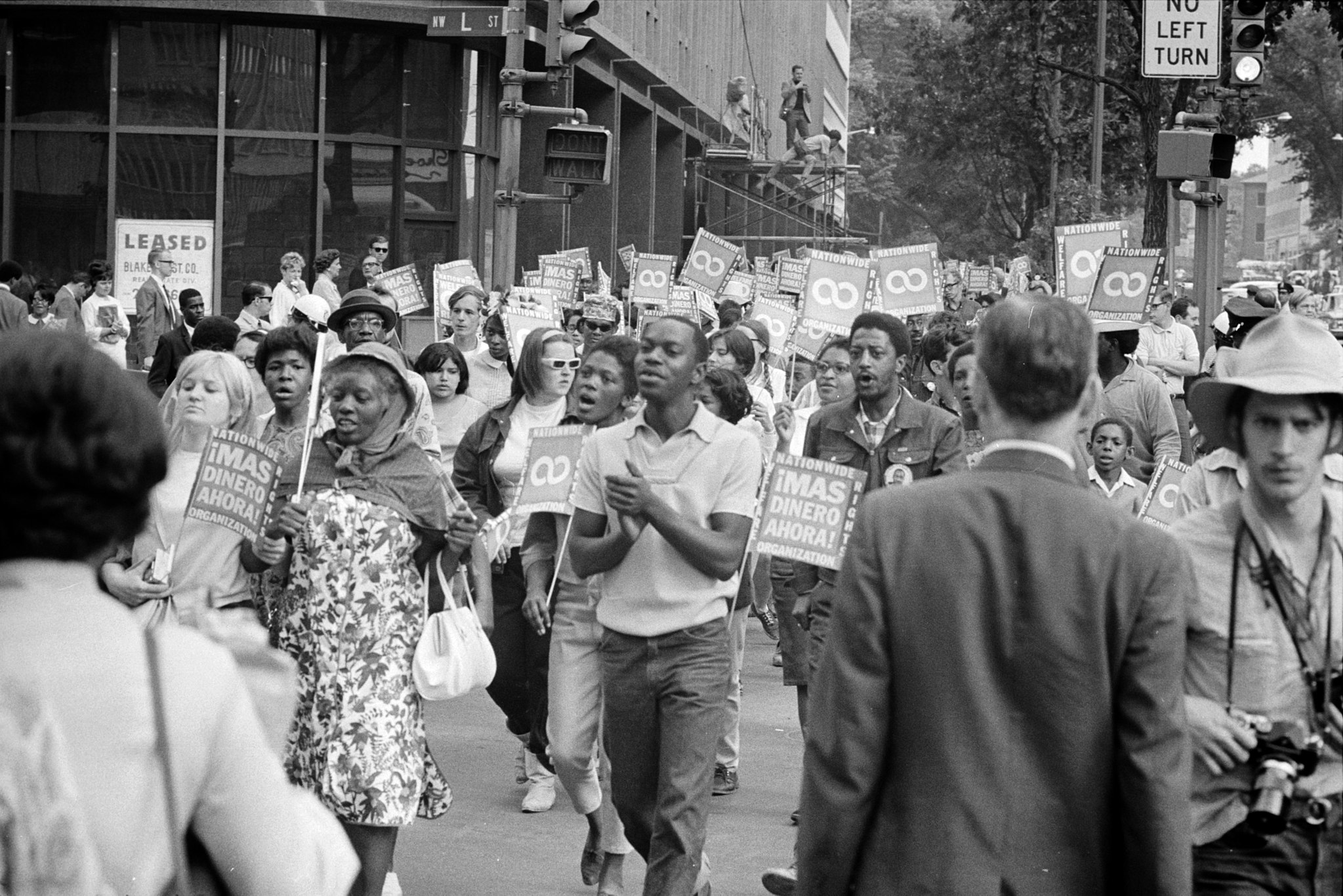 Fifty years after Dr. Martin Luther King Jr.’s campaign to improve the conditions of life for the poor in America, a convergence of events around the globe is demanding our attention.  Many of these current events may seem to be unrelated, but there are connections if you take a step back and look more closely. The setup: 50 years after the civil rights movement and the beginning of a popular ecological movement and immediately after America elects its first Black president—twice—the US (by way of the electoral college) elects a racist, climate-change-denying proxy for extraction industries and corrupt financial institutions to the White House. Things are looking worse for the poor, just when they were looking better. What happened? And more importantly, in the words of Dr. King: “Where do we go from here?”

Maybe just in time, America is experiencing a reawakening to nonviolent protest, right in the middle of a series of anniversaries of major Civil Rights events. The 50th anniversary of the march at Selma happened in 2014 and was commemorated with grace and dignity by President Barack Obama. 2018 marks 50 years since sanitation workers Echol Cole and Robert Walker were killed by a malfunctioning garbage truck in Memphis, prompting a strike by sanitation workers for improved working conditions, including safer equipment. This year also marks a half-century since the assassinations of Dr. King and Robert Kennedy. Dr. King’s Poor People’s campaign will also have its 50th anniversary next month.

We are also in the midst of some important ecological movement milestones as we remember the release of Rachel Carson’s Silent Spring in 1962 and first Earth Day in 1970.

The Poor People’s Campaign took place in May and June of 1968, when 50,000 people arrived in Washington to bring attention to the problems faced by poor people in the United States. Dr. King was in the final stages of planning the Campaign when he was brutally assassinated in Memphis while visiting that city to help striking sanitation workers win recognition of their union by the city and Mayor Loeb. The Campaign was poorly covered by the press at the time, and many people following the news were unaware that the campaign had even occurred. I do not remember ever hearing it mentioned in school or hearing people talking about it when I was a kid in the 70’s. I learned about the event from a library book, I Have A Dream: Writings And Speeches That Changed The World, part of a Black History Month display at the Rainier Beach Library in 2014.

A Poor People’s March on Washington seemed like a great idea, but I had never heard anything about it actually happening, so I began asking around. Lots of people I talked to remembered something about a march like that one happening, but most people did not remember the Poor People’s campaign march specifically.  Others remembered it only vaguely. In the four years I have been looking into the history of this event, I have managed to meet only one person who actually attended the event.

Not only did somewhere between 7,000 and 50,000 (sources vary wildly on their estimates) people march on the Washington Mall, approximately 3,000 (estimates vary between 2,000 and 5,000) of those marchers remained on the Mall for six weeks. The city of people staying on the Mall was dubbed “Resurrection City” by the campaign. The makeshift city had its own school, a counselor, a barber, a bakery, and other services. Resurrection City even had its own zip code during the short time it existed: 20013.

Resurrection City also had the dubious distinction of having its own FBI code name during its existence: “POCAM.” The campaign was initiated on December 4, 1967, after Robert Kennedy suggested to Marian Wright Edelman that Dr. King should bring poor people to Washington to make the problems of the poor in the US more visible to middle America and give the poor a chance to advocate for themselves by meeting with legislators. Under the leadership of Dr. King’s best friend, Ralph Abernathy, the SCLC (Southern Christian Leadership Conference) and SNCC (Student Nonviolent Coordinating Committee) carried the event to fruition in Dr. King’s absence. Coretta Scott King led the marchers into Washington, DC on Mother’s Day, 1968.

The march focused on bringing attention to the economic injustices suffered by all the poor in America and was purposefully integrated, with representatives from White, Black, Hispanic, and Native American communities all present. The “Committee of 100,” who arrived in Washington prior to the main body of marchers to lobby for an “Economic Bill Of Rights,” demanded,

Sadly, these “five planks” are more relevant than ever fifty years after the 1968 campaign. Certainly, many things have changed, but many problems remain and some situations have deteriorated.

The value of the Federal minimum wage peaked in 1968 and has been in steep decline ever since. Corporations have increased their stranglehold on our Federal government (especially since the passage of Citizens United) and continue to call individuals who receive help “leeches” or “losers” while shamelessly feeding at the bottomless trough of corporate subsidies themselves. Certainly, the level of violence in American culture (the entertainment industry in particular) generally seems to be continuing to escalate. Violence in movies, television, and video games has become more available with home video game and movie systems becoming more affordable, and new film technology seems to be leading to increasingly fast-paced and graphic brutality. Police brutality against citizens, which has always been in the background of life for people of color and the poor in the United States, is finally coming to the attention of mainstream America.

It may be difficult for people who grew up seeing images of war, school shootings, and police brutality to imagine that people were genuinely shocked by the images of violence from Vietnam—sometimes referred to as “America’s first televised war”—on the evening news in 1968. Even since before Vietnam, The US has been almost continuously involved in warfare, though we may not always call it that. I was shocked one day when a friend was talking about someone he knew coming home from “the war” and I had to ask, “Which one?” That question stopped me in my tracks. It could have been Korea, WWII, Afghanistan, Iran, Iraq, Syria…. Meanwhile, even with the passage of the Clean Air Act in 1970, climate change continues unabated. We may finally be starting to notice the effects of hundreds of years of industrial pollution taking its toll on our daily lives, though we still seem stubbornly unwilling to do much about it

So, fifty years later, perhaps another march is in order. We have our work cut out for us. Several organizations have plans in the works, including the SCLC, several labor unions, and Rev Liz Theoharris and Rev. William Barber, under the banner of the “Poor People’s Campaign—A National Call for Moral Revival.” (See their website for more information.

Given the global nature of our economy and environment, perhaps a worldwide march is in order. As the US continues to export its products, policies, culture, and pollution, poverty is a more global issue than ever. As are the issues of violence and climate change. What would a worldwide march on the anniversary of Solidarity Day look like? Marchers in every national capital, in every major city, in every town square in the world? In order to be as effective as possible, the global nature of poverty and climate change needs to be addressed at the planetary level.

The 50th anniversary of Solidarity day is June 19th. We’ll see what unfolds around the globe to commemorate the event—it should be a good time to “act locally, think globally,” as they say.

I’m going to hope for good weather, myself. I’ll be bringing a bottle of water from home (reusable, of course!), just in case it gets hot that day. See you there! SOLIDARITY!

King, Martin Luther, Jr. I Have A Dream: Writings And Speeches That Changed The World. Edited by James Melvin Washington with a foreword by Coretta Scott King. 1992 San Francisco, Harper San Francisco.

Abernathy, Ralph. And The Walls Came Tumbling Down. 1989 New York, Harper, and Row.

Klein, Naomi. No Is Not Enough. 2017 Chicago, Illinois Haymarket Books.

Klein, Naomi. This Changes Everything. 2014 New York Simon and Schuster.