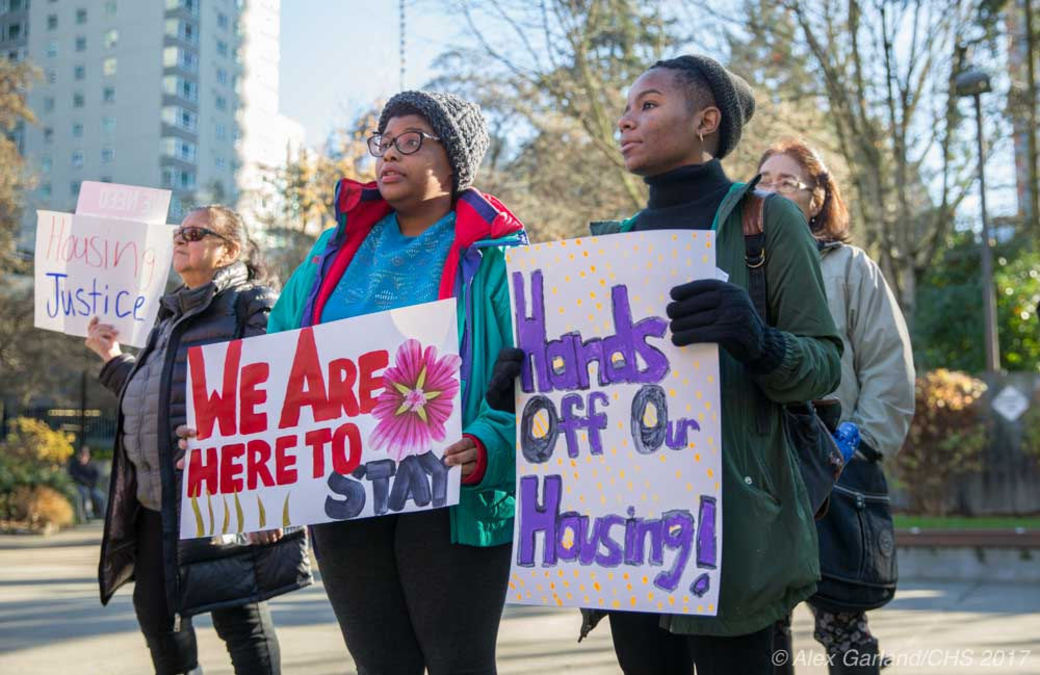 This is not an impossible problem. Progressive revenue is the solution.

No one doubts that too many people are sleeping outside in Seattle. In the last ten years, as housing prices have increased and affordable older buildings were demolished, only to be replaced by luxury units, the number of unsheltered individuals has exploded. Our social services have been sapped of resources, while our housed neighbors are at a loss for what to do. People of all ages, all genders, all races, and all walks of life have found themselves without shelter and without help.

Consider the math. While homelessness is on the rise internationally too, more people slept outside in King County in 2017 than in all of England. King County data show that close to 30,000 individuals used some form of homeless service in 2017. According to the U.S. Census Bureau, in 2017 nearly 200,000 people lived below the Federal Poverty Level in King County.

Seattle’s punitive responses to homelessness range from banning camping to destroying personal property to ticketing people for sleeping on the street. These responses effectively turn poverty into a crime while doing little to address the fact that we have among the highest rents in the country and a severe shortage of low-income housing.

The Human Rights Commission calls on city leaders to fulfill their obligation to preserve human rights and dignity by ending the medieval practice of mass sweeps. Until there is enough affordable housing to go around, people should only be evicted from locations that are intrinsically dangerous or interfere with public use.

Until city leaders face the scope of our city’s problems head-on, this problem will continue to worsen. This will require decisive–and controversial–action to expand shelter capacity, reform policies towards unauthorized encampments and vehicle residents.

But the only true long-term solution is to dramatically accelerate the pace of low-income housing production. It’s time we did better.

We Have a Duty to Protect Human Rights

Seattle is not alone in struggling for the right response to the crisis. While we have been less cruel than Denver, where law enforcement removed blankets from sleeping people on a freezing cold night,[1] Seattle’s punitive law enforcement remains troubling.

This lies in stark contrast to our stated goals. In 2012 Seattle declared itself a Human Rights City.  Yet we know from reporting and our own observations that SPD has been issuing $500 tickets to homeless neighbors. In Seattle, people sleeping unsheltered are regularly forced to move from place to place, despite the fact that there are insufficient resources available to them.

The old solutions clearly do not work.

It’s true that on any given night there are a handful of empty shelter beds in the city. But rather than impugn the motives of a person who declines a night in the shelter, we might ask ourselves why they prefer to sleep outside. A 2016 survey revealed many good reasons: overcrowding, bedbugs, lack of accommodation for partners or pets, and not being able to store belongings, among others. There is no incentive to leave behind one’s belongings to take a bed indoors for one night—or when you know full well you’ll be roused at 5:00am the next day and sent back outside with no guarantee of a bed the next night.

Mayor Durkan has the power to end the evictions. She believes that it is inhumane to allow people to live in encampments, but she doesn’t seem to comprehend the damage done by evicting our homeless neighbors again and again. There simply isn’t enough housing. Evicting several camps per week amounts to a cruel game of whack-a-mole in which people are continually pushed from one unauthorized location to another.  This inhumane practice strips Seattle’s most vulnerable of their basic human dignity. No longer regarded as people, they are treated as unsightly pests to be smoked out.

To End Homelessness We Must Build Housing

That brings us back to housing. Housing is a human right, and it’s time our elected leaders started acting like it. According to the Housing Development Consortium, the City of Seattle alone will need another 27,481 units of housing for extremely low-income households by 2030. If all  the HALA recommendations go as planned, we’ll get 6,000 of those units in the next ten years. That’s not enough. Stepping up to the challenge will require new revenue – there’s just no getting around that. A first step? Passing an Employee Hours Tax on large businesses to raise at least $75 million per year this spring.

Despite its name, the Employee Hours Tax would not be assessed on individual households or on individual employees. Instead, the tax would serve the common good by raising revenue from large corporations that have dodged their civic responsibility via tax loopholes. Large corporations just received a 20-30% tax break from the Trump administration.

Our local corporations must recognize their obligation to invest in the community that has supported their prosperity.

Join the Housing for All Coalition on Monday, April 16th at Emerald City Bible Fellowship, 7728 Rainier Ave. S at 6pm for a Town Hall. We’ll be joined by Councilmember Lisa Herbold and members of the Progressive Revenue Task Force. Come learn more about the proposal.

We can’t meet the growing demand for city services on the backs of our low-income neighbors. We can’t keep asking folks to pay ever more sales and property taxes. An employee hours tax on large businesses will help close our housing gap without burdening stressed communities. Everyone deserves a place to call home.

Ending homelessness requires that we act on our values. Our humanity and the dignity of our neighbors is at stake.

Tammy Morales is a community organizer in South Seattle and co-chair of the Seattle Human Rights Commission.