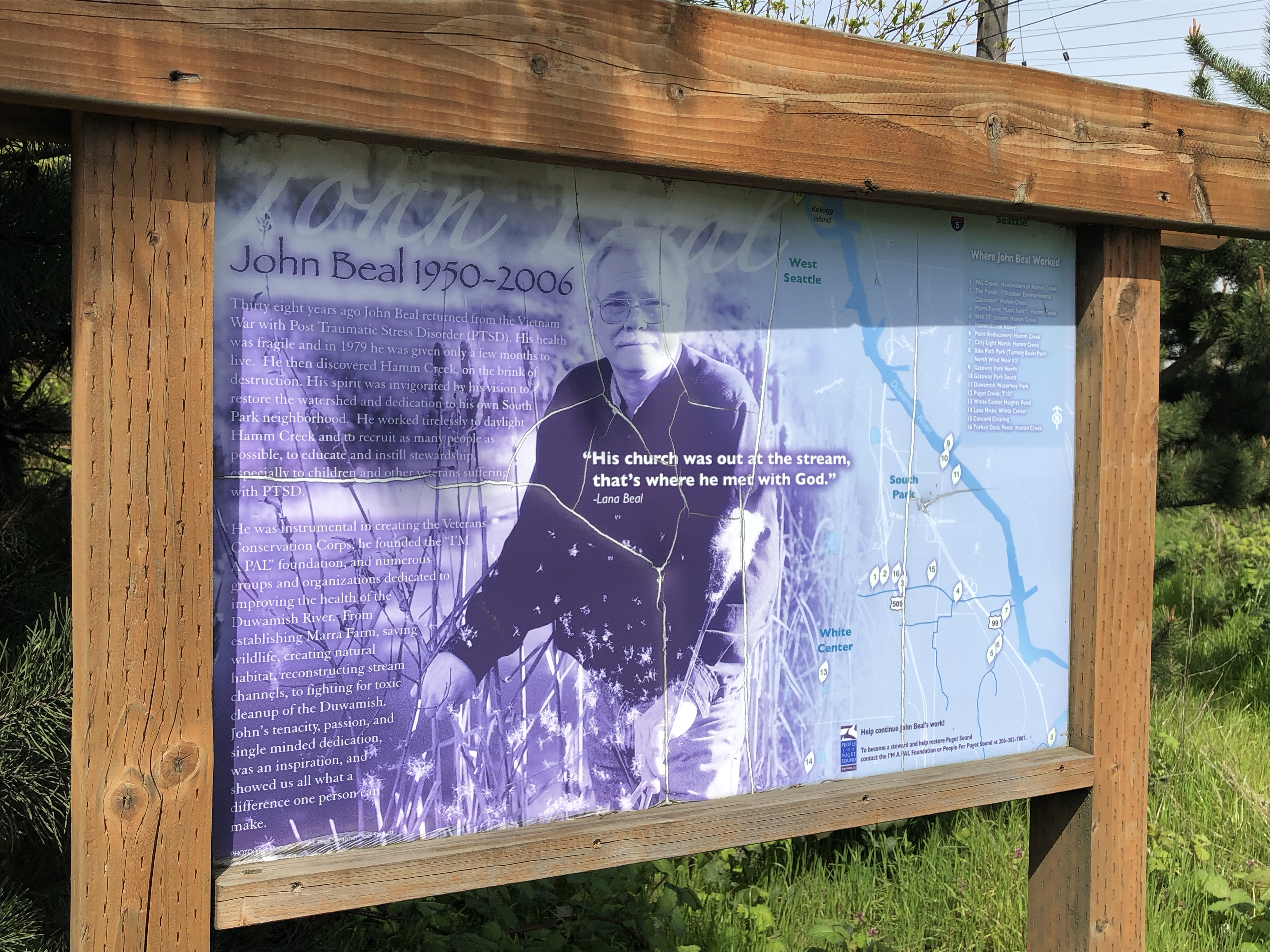 If you’ve walked along the Duwamish Trail, or fished in the river, or, really, lived in Seattle anytime since the 1980s, you’ve benefited from the work of South Park resident and unlikely environmentalist John Beal.

The man was a force of nature, a short-tempered curmudgeon, and a dogged protector of the Duwamish River and the streams that feed it. Far from the standard-issue white, fully-fleeced environmentalist, Beal was a Vietnam veteran with deep physical and emotional wounds who, in the prime of his life, was told he had mere months to live. The news devastated him. He sought solace in the woods along a polluted tributary of the Duwamish, and what he decided that day helped change the course of our city.

John Beal was born on January 22, 1950, in Montana. In an eerie foreshadowing of his own future, his father died of a heart attack at home late one night just months after John was born. He was color blind and dyslexic and struggled through school. The family moved to Spokane, Washington, where, in 1967, a run-in with the law prompted a judge to allow Beal the unenviable choice of jail or the military. He chose the Marines and could hardly have picked a more inopportune time.

While he was training for combat at Fort Pendleton in San Diego, California, the People’s Army Vietnam was planning the massive Tet Offensive, which it launched in January of 1968.

Beal, an 18-year-old rifleman, married his high-school sweetheart and dropped into the jungles of Vietnam in early February. From the outset, he saw intense fighting. In letters home, he described the constant bombardment of rockets and mortars, the ever-present threat of mines and hidden booby traps.

Over the course of his tour, Beal was wounded on three separate occasions, taken captive, beaten, and held in a bamboo tiger cage for 13 days. He escaped with the help of a local woman and was sent to a hospital on Guam before finally being shipped home in September of 1968.

He returned to a country in which public sentiment was in full revolt against the war. To support his growing family, he worked jobs around the West before settling in South Park in 1976. Money was tight, the family struggled at times, and Beal was never the same after Vietnam. The horrific images, the sound of rockets, the constant fear of ambush stayed with him, bubbling to the surface as disorienting flashbacks and fits of anger.

Then, at the age of 29, just like the father he never knew, John suffered a massive heart attack while combing his hair. Two more hit him in the space of seven months, and he was diagnosed with heart disease. “You have about four months to live,” his doctor told him, “and it’s going to be a very painful death. I recommend you get a hobby.”

Devastated, Beal went to a wooded area not far from home and sat to contemplate the part of his life that remained. “It was a place no one else wanted to be, and that’s why I went there. I went to that place to die,” he later told the Seattle P-I.

But he did not die. Instead, he found a purpose. Before him lay Hamm Creek, a once-vibrant wetland habitat that had been so thoroughly degraded it was more dump than tributary. He began pulling trash, cans, truck tires, a washing machine from the putrid water.

The Green-Duwamish River, into which Hamm Creek empties, begins in the Cascade Mountains and winds northwest for 65 miles before draining into Elliott Bay just south of present day Seattle. The people of the Duwamish tribe relied on the river for thousands of years before European settlers arrived and began altering its course to accommodate their commercial enterprises. By the time Beal moved to South Park, the Duwamish had lost its identity as a natural river and was instead referred to as a “waterway” on official maps. The Duwamish and its tributaries had become an industrial dumping ground for the paint, asphalt, boat building, and other businesses along their banks.

Beal did not finish high school and never attended college. He had no formal ecologic training whatsoever but recognized that natural processes supported healthy habitats. To restore Hamm Creek, he planted watercress, duckweed, and other native plants, and placed nurse logs to slow water flow and create habitat.

The more he learned, the more problems he saw. The creek’s four forks had been straightened, rerouted, and funneled into pipes under South Park to make way for development. Studies discovered the water and sediment held unhealthy amounts of metals—including zinc, copper, and lead—and high concentrations of PCBs (polychlorinated biphenyls) cancer-causing chemicals once used as coolants and lubricants.

“Industries, when they can get away with it, are going to pollute,” Beal said. When he was not pulling trash from the water, he was reporting polluters to government officials who viewed him as a crank and were less surprised of the violations than they were of the fact that anyone cared enough to call.

“With my dad, you’re going to have people who love him and people who hate him,” recounted his oldest child, Liana. Stubborn and bullish, Beal did not care who he upset. He was absolutely committed to restoring the creek.

Through the 1980s and 90s, what began as a one-man cleanup project grew into a wide-scale effort. Beal became a beacon for other volunteers and a catalyst for the greater river rehabilitation movement. To lend himself credibility in near constant fights with government officials, and to help secure funding for projects, he established the I’M A PAL (International Marine Association Protecting Aquatic Life) foundation. It held work parties that cleaned up toxins from an abandoned treatment facility, brought sections of the piped stream up to daylight, and reestablished the creek’s connection to the Duwamish near W. Marginal Place and S. 96th Street. Today, that spot provides habitat for returning salmon, beaver, and river otter. Standing beside the creek’s exit, you can watch Great Blue Heron glide above the river and osprey dive for fish in its waters.

Despite his irascible nature, Beal was popular with local kids. He brought students from Concord Elementary School to his cleanup sites to help them learn how the wetland functioned. They raised salmon fry in class and released them in the tributary. It would not be uncommon, walking past Hamm Creek some mornings, to see Beal standing at the center of a circle of attentive school kids, pointing out salmon with one hand and chain smoking with the other.

During the mid-1990s, Beal routinely patrolled the Duwamish by boat, registering complaints against polluters. As he developed partnerships with the Duwamish tribe, Puget Soundkeeper Alliance, and other groups, the movement gained steam. By the end of the decade, pockets of habitat were being restored all along the river, and there was finally enough support to push for a substantial cleanup effort. In 2001, the EPA designated the Lower Duwamish as a superfund site, beginning a massive restoration project still underway today.

Beal often said his life was tied to the river. Restoring it had given him purpose through the days after his first heart attacks—days that were supposed to be his last. Despite his diagnosis, he lived 27 more years before returning to where he had started for one final battle.

In 2004, the City of Seattle began illegally building a new training facility for its police officers and firefighters at the headwaters of Hamm Creek. Beal complained to the Corps of Engineers, and the city was eventually fined. After a bitter fight, with Beal pleading for then Mayor Greg Nickels to relocate the facility off the wetland, the work continued. Those close to him say this defeat finally broke his heart. Already suffering from mounting health issues, including diabetes and epileptic seizures, Beal went into a deep depression and died on June 23, 2006 at the age of 56.

To John Beal, the Duwamish was not a trash heap or a commercial waterway. It was a river that supported the lives of myriad plants and animals, as well as, his own for nearly three decades, it could be argued. There are small monuments to him—a weathered board near Hamm Creek displaying his image, a memorial garden at Concord Elementary, an award given each year by the Duwamish Alive! Coalition. But, perhaps his greatest memorial is the cohort of volunteers who have maintained his tireless commitment to protecting the city’s unparalleled natural resources.

Before he died, Beal testified before the state legislature in favor of a conservation organization for veterans. Drawing on his experience in Vietnam, he believed that by working to heal the environment, soldiers could heal their own wounds. The Veterans Conservation Corps was established in 2007 and has spread throughout the country, helping thousands of veterans adapt to post-service life through hands-on involvement in natural resources among their peers.

This weekend, you can celebrate Earth Day and continue Beal’s work by joining the Duwamish Alive! Coalition, which will host a community cleanup event April 21, beginning at 10 a.m. at T-107 Park (4700 West Marginal Way SW, Seattle 98106) near the Duwamish Longhouse. More information is available at http://www.duwamishalive.org/event/duwamish-alive-earth-day/.