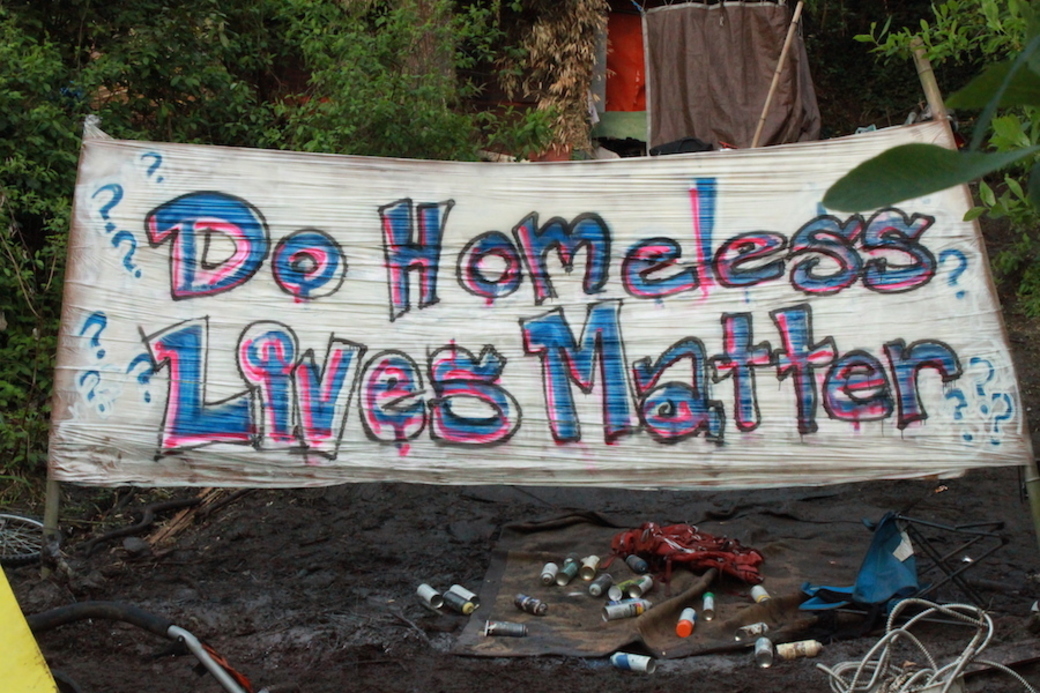 Along a muddy path next to a section of the Burke Gilman trail in Ravenna, 25 activists joined the residents of a homeless encampment Wednesday hoping to halt a sweep. When the Navigation Team’s outreach group arrived, they were surprised to see a band of activists with linked arms acting as a human barrier to vehicles. The outreach notified the rest of their not-yet-arrived team, which then called for SPD back-up. Two more police vehicles arrived, but there was no physical confrontation and no arrests.

Activists rotated through the encampment to provide a presence during the sweep. A few discussed the oddity of Seattle Police Department’s (SPD’s) Navigation Team uniforms. Everything was normal except one item: a Blue Lives Matter patch with “NAV” at the bottom left. 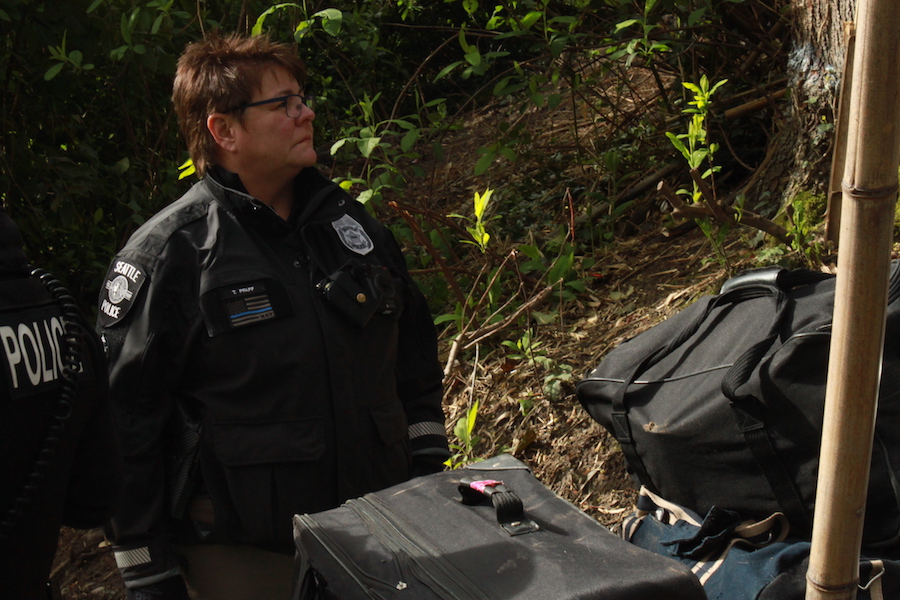 SPD public affairs officer Patrick Michaud sighed in frustration and said “really?” to inquiries about the patches. He said he wasn’t sure if the Blue Lives Matter flag specifically was against department code, but noted he was not aware of the patch regardless and the department has not responded to further inquiries.

Members of the Navigation Team appear to wear the flag as a patch in Nov. 2017, documented in one photo and a video by The Seattle Times. At that point, the emblem did not have “NAV” at the bottom left of it—clearly visible at 1:18 in the Times’ video. Instead, it was the Blue Lives matter patch alone at left with a separate, much larger “SPD NAV” patch on the right of SPD sergeant Eric Zerr’s uniform, as with all of the other SPD officers in the video.

“There’s very specific uniform policies that we have here and people aren’t supposed to have their own patches,” Michaud said.

The Blue Lives Matter flag and movement emerged through backlash to the Black Lives Matter movement. Blue Lives Matter uses the same rhetoric and acronym of BLM to mean nearly the opposite of the original BLM movement, flipping it on its head in a take reminiscent of reverse racism. The idea is that law enforcement’s lives are not taken into consideration and also matter, despite most police going unindicted and uncharged in fatal shootings.

In 2015, The Washington Post joined Bowling Green State University to find that of the 35 resolved cases of police fatally shooting someone over a decade period, 21 ended with acquittal or charges dropped. The previous decade had less than one-third of officers convicted, ranging from reckless discharge of a firearm to felony murder. While police deaths have fallen or stabilized from 2008 to 2017, most of those deaths, when looking at the details from the National Law Enforcement Officer’s Memorial Fund, are not related to direct conflict with subjects. In the broad scale, police deaths have overall dramatically decreased since the 70s while deadly shootings committed by police have done the opposite.

While activists tried engaging the Navigation Team sergeant on more political topics, like Seattle’s head tax and Amazon, the sergeant said he would not talk about political matters.

Meanwhile, 36-year-old Tomás, a camp member, was in the middle of cooking breakfast. He used a small green box that acted as a mini Pullman stove with a gas reservoir to warm up pipes for cooking food. Tomàs specified it runs on “anything with enough octane.” As his scrambled eggs cooked, he pulled out some flour tortillas and Tobasco sauce amid the rubble. Though a mess, Tomàs is clearly a handyman. He had milk, a small axe next to chopped wood, wires, jerry-rigged tools, and laundry detergent in his area. But it wouldn’t stay for long.

“They’ve kicked us out three times and we just keep coming back because there’s no place to go,” Tomás said. SPD conducted a previous sweep in Dec. 2017, one of three instances for this encampment. He explained the Navigation Team “used a backhoe and put it all into a fucking dump truck. They said they would take care of it and didn’t last round. They took everything.”

The Navigation Team is a group of people made up of contractors and city employees who conduct outreach, assess homeless encampments and “clean,” as the city calls it, or “sweep,” as activists call it.

Regardless of the distrust, Navigation Team sergeant Zerr offered storage for the campers’ things at Sonny Gym where they can be retrieved later with a name and appropriate description of belongings. Only two residents were willing to consider the offer.

Seattle Police Department (SPD) lieutenant Jason Verhoff cited the reason for this sweep as the presence of environmental risk (treefall and landslide), garbage, and weapons. On March 19, police arrested one of the residents, who had a felony, because he unlawfully possessed ammunition.

One week later, the encampment showed up on the Navigation Team’s tentative schedule, marking it to be swept on March 26—shown by a leaked document given to Hawkins. This got shifted back, however, as shown on the official schedule possessed by Navigation Team spokesperson Will Lemke. The leaked document shows the Ravenna Woods encampment was, at the very least, on the Navigation Team’s radar for a sweep before it was assessed because inspectors from the Financial and Administrative Services office visited on April 4.

The sweep notice went up April 12, officially scheduled for April 18.

Lemke explained that, because of the arrest, the priority level on addressing the encampment rose higher than others. Substance abuse doesn’t increase a need for a sweep, he explained, but criminality and weapons do.

There was a brief over-the-phone discussion in which an officer mentioned “pedestrian interference” if they blocked bulldozers—which encampment members said were used during the last sweep. The bulldozers, however, never came Wednesday. The encampment structure was instead torn apart by Navigation Team hands.

“If you want to work with homeless people, that’s fine, but no vehicles are getting through here,” said Hawkins to the Navigation Team. “These people are saying they do not want their shelters destroyed. They’re clearly threatened enough to ask us to be here; it’s clearly a negative.”

Sergeant Zerr disagreed, citing the Navigation Team’s 30% success rate in getting those swept into temporary housing as a positive. A separate report obtained by The Emerald does show that for four months in 2017, 32 percent of 499 referrals given by the Navigation Team resulted in a move to sanctioned encampments, shelters, motels or family.

The encampment itself is on unstable, muddy ground. Camp members attempted building stairs on multiple occasions to stay out of the mud, but were never successful beyond the second day. Old hay remained sprinkled at the encampment entrance in an attempt to endure Seattle’s weather. Residents made ditches along the sides of the encampment as well in an effort to drain the water.

The most notable thing about the camp, however, was a larger shelter holding more treasured items, a couch, and a heater. It was made out of various debris including discarded construction covers, bamboo, branches, and even a ripped off cover from a freezer as a door. If nothing else, the encampment members were extremely innovative.

Activists, campers, and the Navigation Team sergeant worked together to move campers’ belongings out of the area. Activists felt like doing only that so successfully was a win. Later on, however, police again put up caution tape across the outskirts and said anyone who tore it down or crossed it was subject to arrest. At this point, activists argued with the police over being allowed to move some belongings they said one camp member specified wanting. It then shifted to an argument about what the activists were told versus what the Navigation Team was told by that camper, Sean. Eventually, the argument devolved into whether the constructed shelter itself was property that could be salvaged.

Encampment members became uncomfortable with the confrontation. At one point, 27-year-old Scooby—a member of the camp—worried that the escalated interaction would create ramifications for the residents later.

“The bureaucratic system ties so many of the hands of the guys in the system and they’re painted as the bad guys,” Scooby said. “This is incredibly encouraging but really disheartening. Each person is really putting their neck out.”

Scooby, along with 20-year-old encampment member Charlie, spent much of their time moving other members’ items. They both expressed empathy for Sean, who lost his girlfriend that morning.

“I’ve been there,” Scooby said of Sean’s situation and reaction. “I’ve said ‘fuck it all,’ and given up only to be pinged by it later.” His empathy led him to help move Sean’s things in the sweep. “I’ve rescued other people’s things lots of times,” Scooby said.  “I get really anxious the night before and can’t sleep.” Scooby lived at the encampment for five months. He said the community assistance was unexpected. His mom, Zena, arrived the previous night at 2:30 a.m. to help and provide food before the upheaval.

“The main thing is to make sure the structure stays intact,” said Charlie as he moved belongings. The young adult spent most of the day stressed, moving heavy crates with his slender frame and doing mental math trying to figure out how he could save as much of their property as possible. His anxiety played out through occasionally smoking tobacco and by often resting his hands on his knees to stare at the ground, looking lost.

“I’m just kinda tired,” Charlie said. “How would you feel if you lost your home every month, consistently?”

Charlie later began limping, saying his socks bothered him. Amid the stress, Charlie often resorted to jokes as a way of relieving the situation. At one point, he announced, “someone will have to arrest me for public intoxication!” He then pulled out a hammer from the backpack he carried, “because I’m hammered!” Later Charlie would offer what little food they had on hand—mini cupcakes—to activists. They declined. He thanked them many times for their help and support.

In another encampment member, nervousness manifested as endless rambling. In a third, rambling transitioned to a full out heated argument with nobody in particular—and at one point directed toward activists, to give her some space.

“I’ve been to a lot of protests but it’s kind of weird being on the other end of that,” Charlie said.

Tomás also identified the activist presence as “strange,” but said, “it’s not every day that a group of people stands up and tries to help you.”

Zena, Scooby’s mom, has seen many sweeps in her lifetime. She’s been present for every single one to help her son. This time, she brought a shoddy van to help move his and others’ things and to deliver food.

“Til the day I take my last breath, I will always remember how much [Scooby] loves the support,” Zena said. She cited one moment during a previous sweep where an official asked Scooby who she was and he looked back and said “my hero.”

“I want it to be known this support, what [the activists] are doing, it means a lot,” Zena said. “The homeless are not alone. Protesting and being here, now, at the encampment, it’s huge.”