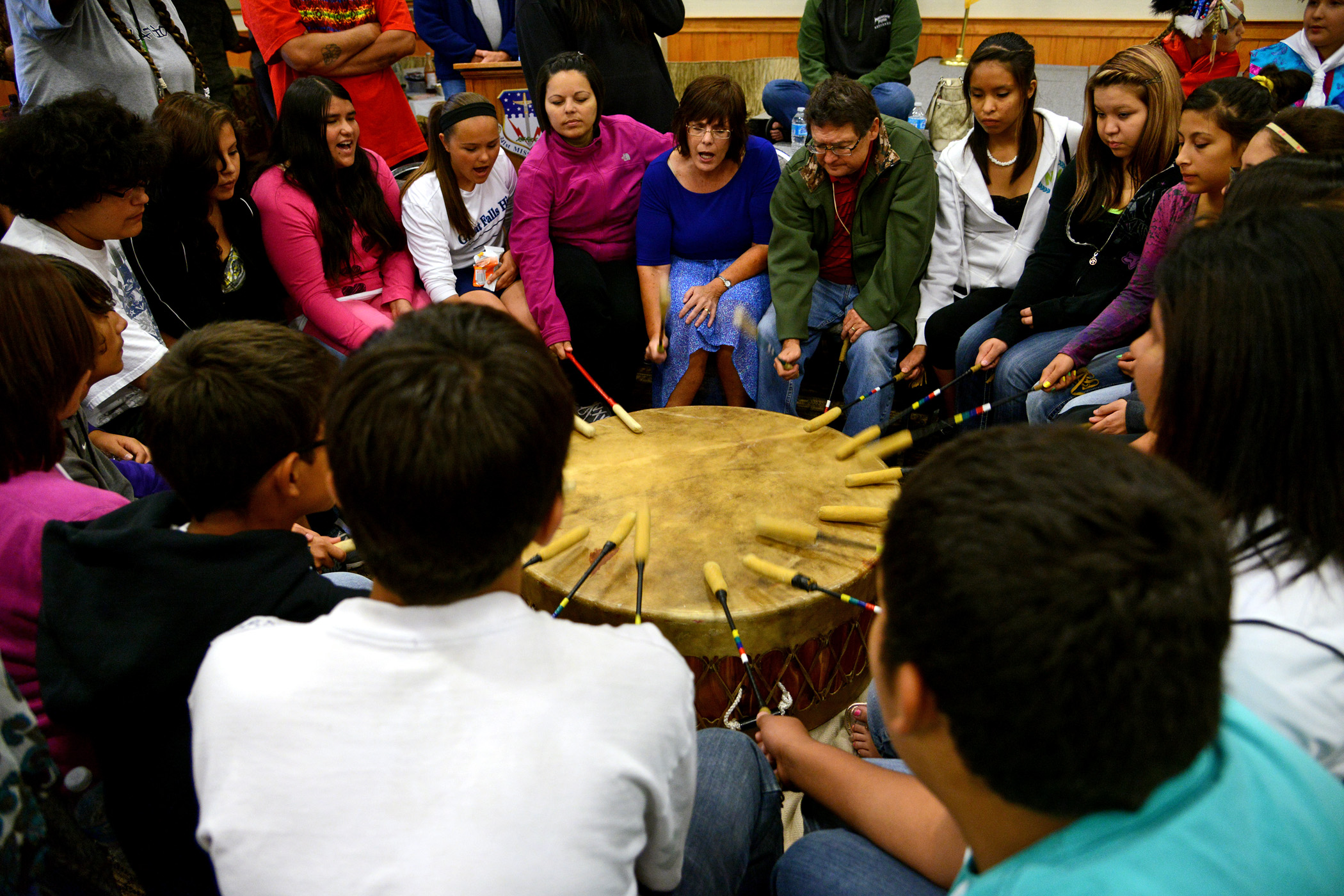 Educators committed to social justice know teaching Eurocentric curriculum is one of many practices impeding academic achievement for students of color. Such curriculum erases their identity and enforces radical assimilation. Therefore, curriculum that decenters whiteness and uplifts the richness of the many cultures students bring to the classroom is critical.

At Port Angeles High School, such a move has resulted in outstanding success for the Lower Elwha Klallam Tribal youth.  High School teacher, Jamie Valadez has tirelessly worked to reunite students with their native language by creating the first public high school Klallam Language class. The results have been astonishing.

After 12 years of teaching the class, Valadez discovered the Native students attending the class had significantly increased their GPAs. In 2012, the average boys’ GPA was 1.77 however by 2016, the average had jumped to 2.43.  Similarly, Native girls were earning an average of 1.31 but by 2016 it had escalated to 2.53.

“That was surprising to us to see the data,” said Jamie. “It made it possible for them to graduate on time with a decent GPA and qualify for scholarships.  It set a stronger foundation for them after high school.”

The road to this overwhelming success was paved by a deep commitment rooted in the preservation and revitalization of a language nearly extinguished, largely by forced Boarding School enrollment.

“The elders were punished for speaking the language in public schools. They started to suppress the language. With each generation, it became more dormant. Less and less people used it especially when they went to boarding schools.”

Between 1950 and 1970, University of Washington linguists Terry and Larry Thompson, interested in preserving this coastal Salish language, began audio recording the elders.  These recordings were archived and later transcribed by elders in 1990.

“We started language perseveration in 1990. Our tribe became self-governed instead of governed by the BIA (Bureau of Indian Affairs),” she shared. “When tribes could govern locally, they asked the community to do a five-year strategic plan on what the community wanted to see.  Part of the plan was language preservation and revitalization. There were only five fluent speakers of retirement age. They came out of retirement to help us. By 1995, three of them had died. It became more important for teachers to learn the language. We needed to institutionalize it. So, in 1999 we went to the school board and created the class.”

For Valadez and tribal members, the winds of change were blowing in their favor. Not only did they receive support from Port Angeles District leadership, the political climate for Native language preservation would soon take a momentous turn thereby solidifying the foundation for her work to flourish.

In 2003, the Washington State Board of Education adopted a rule establishing a three-year First People’s Language/Culture Certificate Pilot Program.  The adoption was significant in that its purpose was to “contribute to the preservation, recovery and revitalization and promotion of First People’s languages and providing the opportunity for tribal children to learn and share their language as a public school.” (Final Bill Report, ESSB 5269)

By 2003, the class had been part of the high school curriculum for four years. Both Native and non-Native students attended, and Valadez noticed a positive change amongst students.

“If you have an environment where people can learn about each other, relationships just naturally grow. You can’t measure it, you just see it. There’s less prejudice and less fighting. More positivity between diverse groups of students. Native students feel included and non-native students are more aware. It’s a win-win.”

As the class continued, Valadez partnered with U.W. linguist, Tom Montler to create the first Klallam dictionary in 2012.  Montler used the transcribed recordings to from the elders to create the dictionary and published it through the university. The Tribes bought hundreds of dictionaries and the proceeds funded development of a second book, the Klallam Grammar textbook, in 2015. They are now creating an app so that students can hear the elders speak their native language.

“The books authenticate the language.” she shared. “It’s really healing for the whole community to have a positive cultural identity. If revitalizing the language has done anything, it’s done that. Its preventative work especially teaching at the high school. They need that avenue to explore their cultural identity and who they are.”

With over 600 students completing the course since 1999, Valadez is now creating future pathways to ensure her work and the language are preserved and continue to flourish for generations to come.

One way is to develop more Native teachers. Currently, there are elementary, middle school and Headstart teachers who teach students through afterschool programs. Additionally, there are community language classes being offered on the reservation. Valadez’s former students are teaching the language at all levels.

“I am a great aunt to a lot of those students. I have taught their parents.” she laughed. “I want them to get their B.A. so they can take over for me when I retire. I don’t want this to sit on the shelf after I am not able to teach anymore. That would be my biggest fear.”

Valadez also shared that their tribal stories are currently being transcribed.

“We can measure the health of a language by its foundation – when you have a dictionary, grammar book and literature books. These resources keep the language alive.  The next stage is to compile our literature.”

Finally, with these resources in hand, Valadez has not only created a full curriculum, she is now creating companion assessments and editing the dictionary.

In addition to an increase in academic achievement, her work has brought true visibility for the Lower Elwha Klallam Tribe.

“Prior to this, there was this invisibility,” she said. “It makes it real that we are still a living culture. We are still here. Take this class and learn. It authenticates it and makes it real. We are co-existing here.  You don’t see that in very many public schools.”

Melia LaCour is an education columnist for the Emerald and the Executive Director of Equity in Education at Puget Sound Educational Service District (PSESD). She is a native Seattleite with a passion for writing and social justice. The opinions expressed reflected in this article do not reflect the opinions of the PSESD. PSESD is not responsible for the accuracy of any of the information supplied in this article