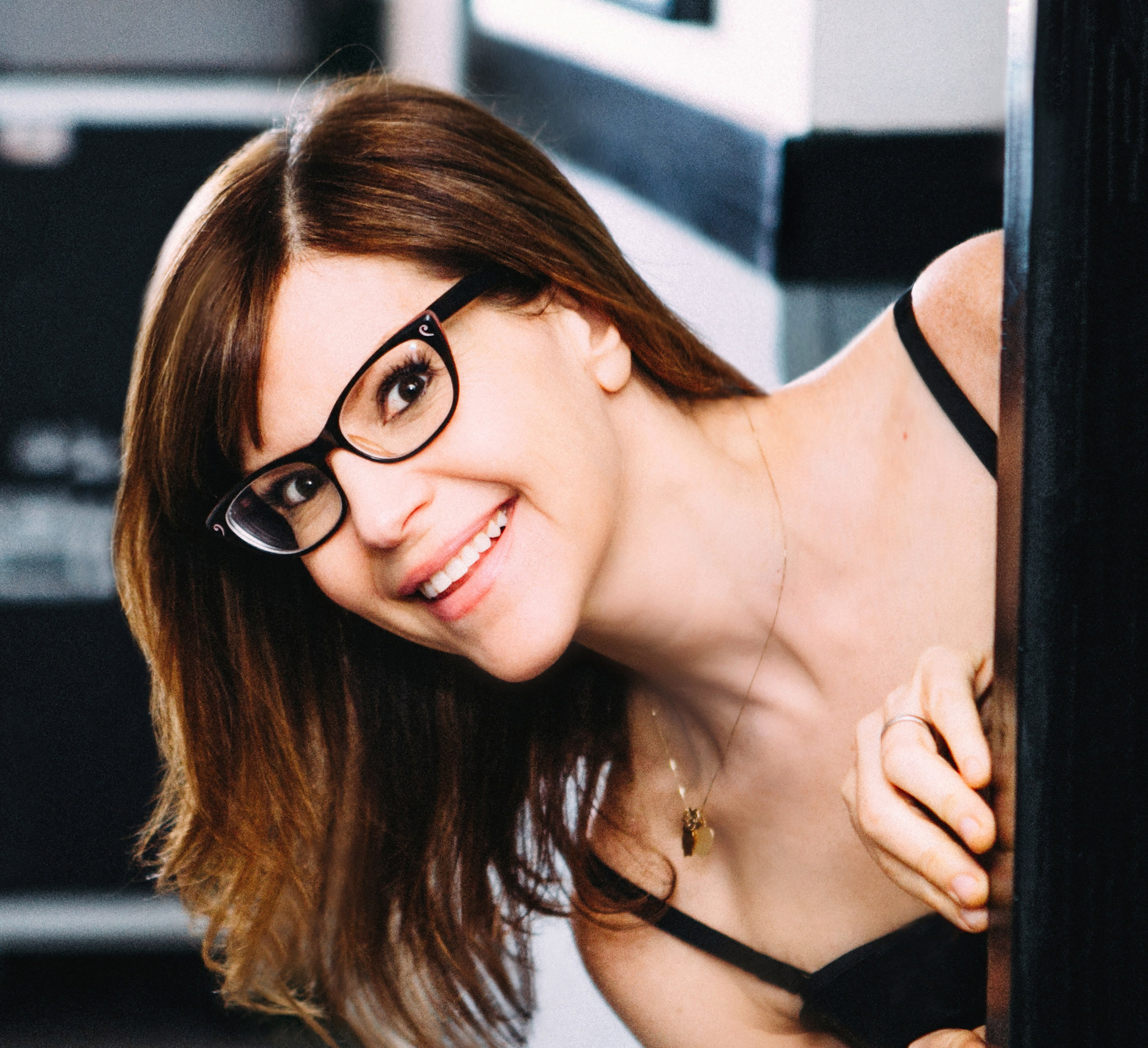 If you’re over 30, chances are you know the name Lisa Loeb. Better yet, chances are you know her hit song, “Stay.” But, in case you aren’t familiar with the talented and prolific songwriter, who will play Seattle May 11th at the historic Columbia City Theater, let us say this: Lisa Loeb is the consummate professional. She writes music for “grownups,” as she calls ‘em, as well as kids and the entire family. She is a Grammy winner.

“Stay” hit #1 in 1994 before she was even signed to a label (take THAT, Macklemore!) and she continues to push her own boundaries with new project after new project – all the while donning her signature cat-frame glasses. As a result, we wanted to catch up with Loeb before she took the Columbia City stage to find out what she’s up to these days, how “Stay” affected her life creatively and what audience members should expect from her on the 11th.

You’ve worked in pop music, kids music and now music for the “whole family.” What is it about reaching all ages that interests you?

I think that’s just it. From a creative side, it gives me a large palate to draw from. I feel more open to express different ideas, different sounds, different genres than I normally would when writing my grownup music. It’s even influenced me as I move forward, as I write my music more geared towards grownups. A lot has happened ever since I put out my first grownup record. Musicals, for example, have become really popular. If you listen to Hamilton, to the music from Coco – there’s just lots of different kinds of music out there. There’s a lot more variety and it’s more open to all kinds of people than it has been in a long time. That’s definitely reflected in the music I like to create with families in mind. But it’s also been playing into the music that I write for my next project.

What have you learned about form or about yourself as a musician by making and recording kids music?

I think it’s a combination of performing for kids and for grownups as well as making the music. I find that that when it comes to family-friendly music, it’s important to tell a story that people understand. There’s something a bit more abstract when it comes to the work and music I write for grownups. But I do enjoy writing music that people hear and understand. As I get older, I find myself enjoying songs more that I get when I hear them the first time.

How did you learn to write music?

When I was a kid, I just started to do it naturally. When I was six or seven-years-old, my piano teacher at the time encouraged me to write original songs. I’ve also always been surrounded by music. I was classically trained in music and ever since I can remember I liked assembling ideas, words and melodies. When I finally learned to play guitar at 14, I really wanted to put songs and words and music together. And, along the way, I’ve continued to learn. I’ve read books about, talked to friends about it, I write all the time, I’ve taught and taken classes. I love listening to people talk about songwriting. And, of course, listening to music. Listening can really help you to understand different ways to write a song.

Not everyone has a silhouette so recognizable as you and your eyeglasses. What is it like to have such a singular look?

It’s funny, when I was first starting out as a professional musician, people liked to talk to me about my glasses. And I avoided it a lot. I wanted to talk about music. I couldn’t believe they wanted to talk about my glasses instead of my music. But the more I thought about it, lots of my favorite musicians – I loved their looks and that didn’t take away from their work. Instead, it added another dimension. For example, David Bowie. He was a huge early influence. Elton John, The Cure. The people clearly have a look that’s easy to talk about. So I stopped being touch about it. Now, I embrace it. And I’m a huge glasses lover! I love to find out where people buy them, I like to try them on. I have my own eyewear line, which I sell in mom and pop stores as well as Costco. I also love when women come up to me and say I helped them be comfortable with wearing glasses, with being themselves. That means a lot to me. It’s important to go through life feeling like yourself.

You’ve done a number of food shows in your career – what is it about these programs that intrigues you?

I love eating. That’s one thing about me, I love eating. Secondly, I’m always interested in food and health. One of my biggest goals in life day-to-day is to be able to eat delicious food that is also really good for me. I also love foods that aren’t necessarily known for being good for you – like pizza, fried chicken and donuts. So, I’m always looking for the perfect combination of healthy or not healthy. Food is important. It’s something we engage with every day and there are so many brilliant chefs, moms and dads who know how to cook, grandmas. It’s one of the small enjoyments that can make a huge difference in your day.

You won a Grammy in January. What were you doing when you heard the good news?

When the nomination came, I think I was in my bed; my mom called me. But in January, I was at the Grammy’s. My award was in the pre-show and I was already there presenting awards for the classical music category – I presented 12 awards. I’d also gotten the chance to spend a good deal of my time with the other nominees in my category, Best Child Album. I respect those people so much and how they enrich families’ lives. In my speech, I went over time but I was glad I was able to thank everyone – when you make an album, it’s a really collaborative effort between so many people.

Oh my gosh! It’s so much more jam-packed. Now – well, I have kids, which is one big thing. But I also feel like I’m doing more things. Voice overs, eyewear line, I’m on tour more than I was back then. I write more songs and put your records much more frequently. There are a lot more elements of being in entertainment these days, which I really enjoy. Like, last night, I was in Washington D.C. to advocate for songwriters and musicians to members of Congress and the Senate.

I feel like songwriting and performance I’ve done for so many years – ever since I was a kid. That stuff doesn’t take as much emotional and physical energy all the time as it used to. It’s easier to compartmentalize. There’s always a song going on in my head. But I love being able to do lots of other things related to playing music. Like cameos on TV, writing music for TV and everything else.

Can you talk about the type of professional freedoms or difficulties the hit song, “Stay,” afforded you when it came out?

I have to say, it was pretty much all freedoms. Some musicians don’t love playing hit songs all the time, but I personally love it. As a music listener, I love hearing people’s hit songs. I feel like I think about that a lot. I can see it from different perspectives. People want to hear the songs they know! Like, yesterday, a couple of us played music in front of the congress people and senators and the [cell] phones came out, there were tears. People have a connection to the song and it’s just such a magic feeling to play a song that connects to people like that.

It’s also a gateway song into my other music. It’s a song that leads people to come hear me play my other songs. But also, creatively, having a hit song that goes #1, it’s an amazing thing. I wasn’t signed to a label yet. And the people in the industry assumed I had to have – that I needed – my creative freedom. They understood. All the creative people I work with and the business people I work with, when I’m making creative things, they understand I need a lot of creative control and I’m used to having creative control.

What should people expect for your Seattle show coming up on May 11th?

The Seattle show will be the kind of show I like to see. I’m going to be playing hit songs people know of mine from the radio, songs from my best-of record. And there will be songs from the record I just won a Grammy for. And songs from my first two records – it will be a variety. There’s usually a lot of talk and storytelling and usually a section for requests. It really depends on how the audience is feeling that day. They have suggestions for me and usually the squeaky wheel gets the grease. So if someone yells out a certain question and I know it I’ll do my best to play it.