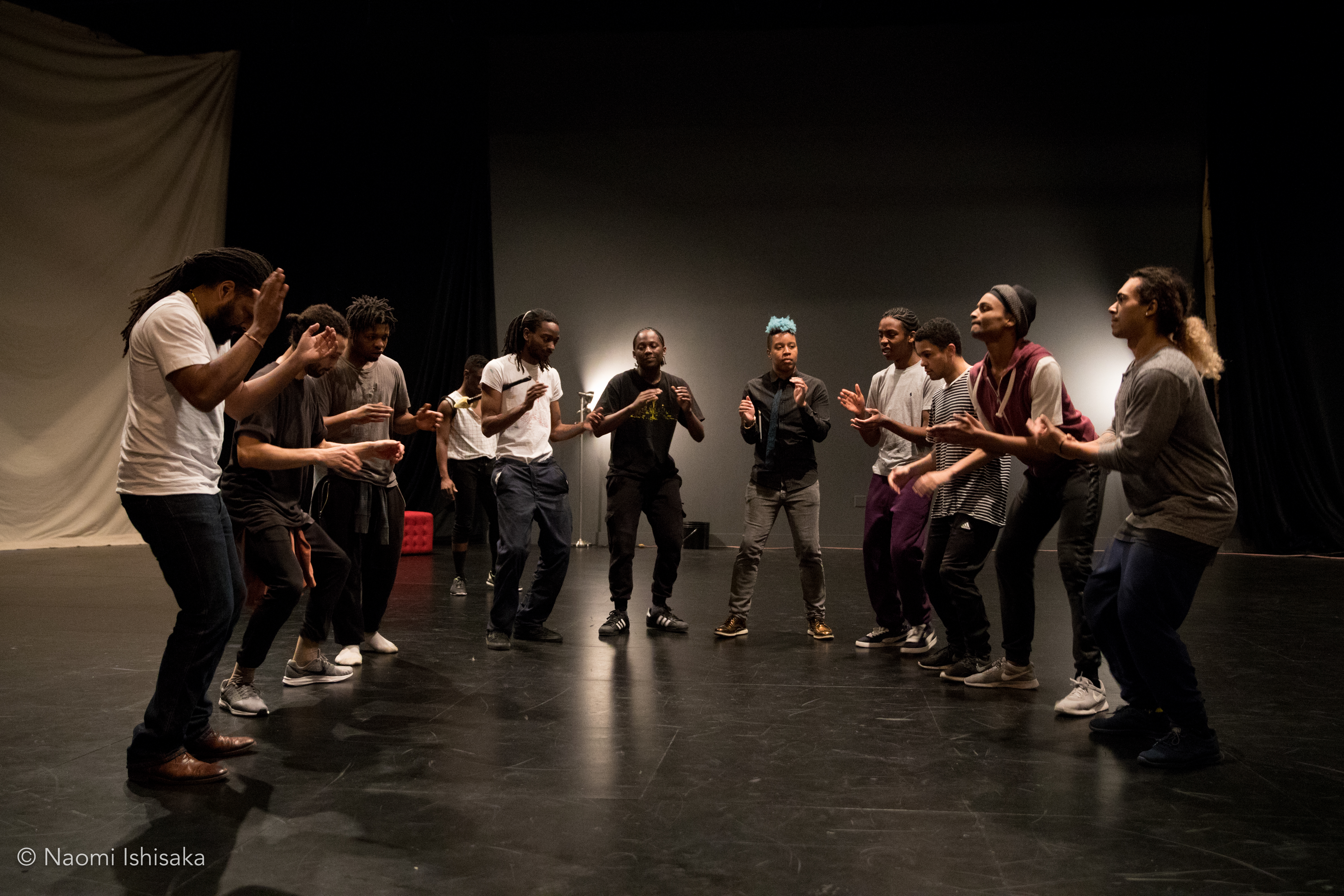 Black Bois actually began as the audience arrived and mingled in the lobby. Several performers, each wearing an opaque black veil over their face, entered the lobby, walked randomly through the assembling crowd, then exited.

On the Boards’ (OtB) Merrill Wright Mainstage has its performance space at floor level, with the audience in tiered seating before it. On entering the theater, I was greeted by Dani Tirrell, Black Bois Creator/Choreographer/Director, who invited audience members to walk around the stage and experience it.

Upstage center was a white platform that ran the length of the entire back wall, with steps leading up to it on either end. The back wall was covered in something black (more on this later). Left center stage were two, cloth-covered tables, differing heights, each holding lit votive candles and one long, white, tapered candle. A chair, facing the audience, sat alongside the tables.

Downstage center was a tall chalkboard with the question, “How does society diminish the experience of Black people.” Audience members wandering around the stage were invited to write a response. When it was time to formally begin the performance, Roache the Muralist moved the chalkboard beside the tables with the votive candles. Throughout the performance, he drew on the chalkboard, as well as on the black medium that covered the back wall.

The show began with loud verbal expression from the black-veiled, black-and-white clad dancers as they entered the stage from the hallways on both sides of the audience. Who are these people? Why couldn’t I see their faces so I could tell them apart? What gender were they? Why were they yelling? Was that anger? Frustration? Confusion? Demand? A combination? Everything?

Whatever it was, in this town filled with intellectualized emotion translated into vacuous art, THIS, this was raw, from the roots, through the vibration of time and space, honest, toes-to-head emotion. Love it, hate it, fear it, celebrate it; you were affected.

The dancers moved around the stage in unison and then came close-up, face-to-face with the audience, expressing the entire time. What they let out punctured through every layer of façade and announced to all: this is no ordinary show; this is where the soul meets action and the tree of all life blooms; get ready, ‘cause we’re coming for your lies; get ready because this is where our truth gets told. Deal with it.

So began an extraordinary evening. Like Evan Flory Barnes masterpiece, Celebration of Life, and Ahamefule Oluo’s brilliant Now I’m Fine, Dani Tirrell recognized no borders of artistic style or genre in Black Bois. Each dance vignette incorporated moves from African indigenous dance, hip-hop, African-American dances from the 1920s to the 2000s, classic ballet, even modern minimalism. Ben Hunter’s violin and sonorous vocals haunted, demanded, grieved, exhorted, and soothed with Appalachian reels, hypnotic gospel melodies, and everything in between and around, often underscored by harmonies sung with keyboard player Darrius Willrich. Poet J Mase III painted verbal stories with a mastery of poetry and language I can only hope to reach in a future life. All this while Roache the Muralist drew ephemeral images on the back wall with water, images that disappeared as they dried, and the video screen played an ever-changing reel of images to punctuate the dance vignettes.

Still clad in the black veil, a dancer confronted the audience with line after line of tropes about being Black. Many in the audience laughed, some nervously, while others sat silent. Was this funny? Was it serious? What was the right response? The audience was given no answer, but was left to sit with the validity and meaning of their own responses. The dancer held the power in the dialogue. In unison, the dancers removed their veils and threw them at the audience’s feet. Anonymity was gone. Together, they became the Greek chorus, a council of community, a space to heal and reset. Individually and in small groups, they danced their stories.

In one vignette, J Mase III took on the persona of Susan, a talk show host, initiating an effort to turn the audience into n******. Susan, with a Seattle-nice voice dripping of cloying venom, demanded that Markeith Wiley act out a stereotype and gave Wiley specific instructions on how to behave. Wiley complied, humiliation increasing with each demand until fully immersed in the stereotypical swagger often presented by media to White people as typical Black life. Mase then put Wiley into direct interaction with audience members, forcing a view into the mythologies of gender assumptions, social norms, and cultural expectations.

One of the most poignant pieces was a duet with Randy Ford and Michael O’Neal Jr. I say duet, but it was actually a trio. Ford and O’Neal portrayed the lifecycle of a romantic relationship: tender beginning, fearful withdrawal, and recrimination, rejoining, breaking apart, rejoining. Simultaneously, Cipher Goings mirrored Randy Ford’s movements, alone, as a shadow would. Was Goings the dreamer and Ford and O’Neal the dream or was Goings the shadow of loneliness that enters into every relationship? Either way, the dance epitomized the complexity of relationship, especially where gender is fluid while showing the beauty and grace that makes it all worthwhile.

One by one, each dancer told a story. An older dancer paired with a younger in a dance-off that ended in mutual acknowledgment; a seemingly lost soul brought back into the fold; a dancer left behind to experience pain alone in the midst of joy, to be resurrected to transcendence. There was so much, it would take a book to explore it all.

There is probably much that ought to be written about the technical dancing, the skill of each performer, the use of dance language to tell stories, the place of this work in the canon of Northwest dance performance, the absence of these talented Black bodies in our mainstream, regional dance and theater scenes, etc., but I have neither the experience nor expertise to write that, so will leave it to someone truly qualified, like Omar Willey, to give a proper critique and review. I will, however, draw on my expertise as a storyteller to say that this performance draws on the best there is in storytelling. While told mostly through dance, each piece wholly engaged the senses by incorporating some combination of movement, sound, visual art, spoken word poetry, and direct interaction with the audience from beginning to end. Despite the great variety of simultaneous action on stage, the dance was the story that bound it all together.

I walked out of the theater repeating the word “extraordinary” over and over again. This was one of a handful of theater experiences I will never forget. The power of Black Bois will sit with me for a long time, and challenge me. Even in this writing, it has demanded that I watch my presumptions about pronouns… a simple thing, yet so profound.

Thank you Dani Tirrell, for not giving up on your own liberation, and for creating opportunity for others to take the journey with you. We are all freer for your dedication to integrity and justice and your skill at getting behind the words to reveal actions. Thank you David Rue, Randy Ford, Michael O’Neal, Jr., Markeith Wiley, Stefan Richmond, Kyle Bernbach, Mychael Hodges, and Cipher Goings for your emotional, psychological, and physical vulnerability. Most of all, for being fully yourselves and removing the veil to reveal the beauty of your Blackness and reminding us that Black lives can only matter when all Black lives are present and prioritized.

Black Bois is at On the Boards through Sunday, April 29, 2018. Though all shows have sold out, OtB encourages people who don’t have tickets to go to the theater and get on the waitlist beginning one hour before the show start time.

Black Bois can stand in their power, Black Bois can hold masculinity and femininity in the same body without compromising on their humanity. My reflections on Black Bois is that I am stronger and more bold in my walk. It is ok to hold space for my Blackness and Maleness and Femaleness and Queerness and none of these things cancels the other out. I am a space holder for other Black bodies to laugh, cry, reflect and find their way. I am more of a “mother” than I could ever be a “father” and that makes me even more powerful.

I reflect on how much I love Black people……like really really really love Black people. There is no people more divine than us. There are no people more gracious than Black people. There are no men on this planet more beautiful, sexy and intelligent than Black men. This process has made me love Black men even more. It is forcing me to show up for Black men in a way that I never knew possible. I now see (really see) the true gift Black men can and will be. Black men (people) have so much work to do, but the process of creating this work has opened up so many doors in my mind that were locked away from years of societal abuse.

Lola E. Peters is a poet and essayist living in West Seattle. She is an active member of Seattle’s African American Writers’ Alliance. Her two books of poetry, Taboos and The Book of David: A Coming of Age Tale, and her book of essays, The Truth About White People, are available major, local, independent bookstores as well as online. Check her website for more information.