No Stamp? No Problem! The Metropolitan King County Council today approved legislation allowing the Department of Elections to send voters postage-paid envelopes to return their ballots in this year’s primary and general elections.

Washington became a vote-by-mail state in 2011. While the Council and King County Elections worked to increase the number of ballot drop boxes available to voters throughout the county, approximately half of the ballots received are still sent by mail. Prior to today’s action, all voters were personally required to place postage on their ballot.

The measure is widely expected to increase voter access and participation. Elections conducted a pilot project this winter, sending 65,000 voters in Shoreline and Maple Valley prepaid return envelopes. The percentage of total ballots returned by mail during the pilot was 74-percent. This was a vast increase compared to 43-percent participation in the 2016 General Election.

The legislation passed Council with a 7-2 vote. In support of the measure were Councilmembers Upthegrove, Dembowski, Kohl-Welles, Balducci, Gossett, McDermott and von Reichbauer. Councilmembers Dunn and Lambert voted in opposition.

Last week, affordable housing developer Mt. Baker Housing announced plans to build 160 new units in Seattle’s Rainier Beach neighborhood. The complex, which will sit at the corner of Rainier Ave South and South Cloverdale Street will include studios, one, two, and three-bedroom units available to individuals and families at 50-60% of the Area Median Income.

The new complex will be a short distance from the Rainier Beach light rail station and will be bordered by Rainier Beach High School. Mt. Baker Housing purchased the land for a little over $4.2 million and hopes to start construction by 2020.

“Affordable family sized housing is greatly needed in Seattle and this site was perfect for it – especially with its close proximity to the Community Center, schools and light rail,” said Conor Hansen, Director of Real Estate at Mt. Baker Housing. “We’re hoping this project will serve as a ‘gateway’ to the Rainier Beach neighborhood and as a catalyst for additional transit-oriented development in the community.” 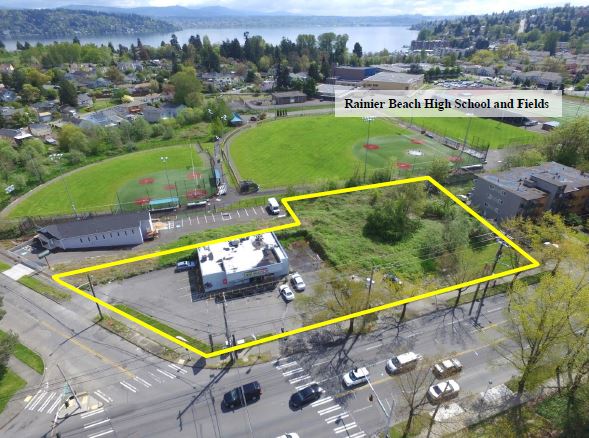 Mt. Baker Housing is a non-profit focused on providing new low-income housing. Since its inception, the non-profit has constructed, and new owns and operates seven properties with over 300 units.

The new complex will also feature the new location of the Rainier Valley Food Bank’s community food center. Rainier Valley Food Bank has operated out of an old building north of Columbia City since its founding in 1991. The new 8,400 square foot location for the organization will feature a commercial-grade kitchen and a hydroponic farm on the roof.

“We are thrilled to partner with Mt. Baker Housing in bringing our long-time vision to reality,” said Sam Osborne, RVFB Executive Director. “While we will continue to provide the same great food programs we currently operate, this new community food center will open up endless opportunities for people throughout Rainier Valley and beyond to come together around great food with an eye toward sustainability, and community organizing through the lens of food to address real upstream solutions to hunger and poverty.”

Seattle police are seeking information regarding an altercation between demonstrators and a motorist Tuesday evening at a fast food restaurant on Rainier Avenue.

Around 7:30 PM police were called to the restaurant in the 2500 Rainier Avenue South after a male driver in a black Ford Focus became involved in a dispute with a group of demonstrators outside the restaurant.

During the incident, the motorist drove his vehicle through a group of demonstrators. Police are still investigating the circumstances which led up to the incident.

The motorist reported his side mirror, windshield and hood were damaged in the incident. Police were unable to locate anyone at the scene with injuries, but are hoping to speak to additional witnesses or anyone who may have initially declined to speak to officers.

King County representatives say that criminals are calling victim’s workplace stating that an arrest warrant has been issued for missing Jury Duty.  To make the scam more real, the criminals are changing the phone number “spoofing” the number to make it look like they are calling from the King County Sheriff’s Office.