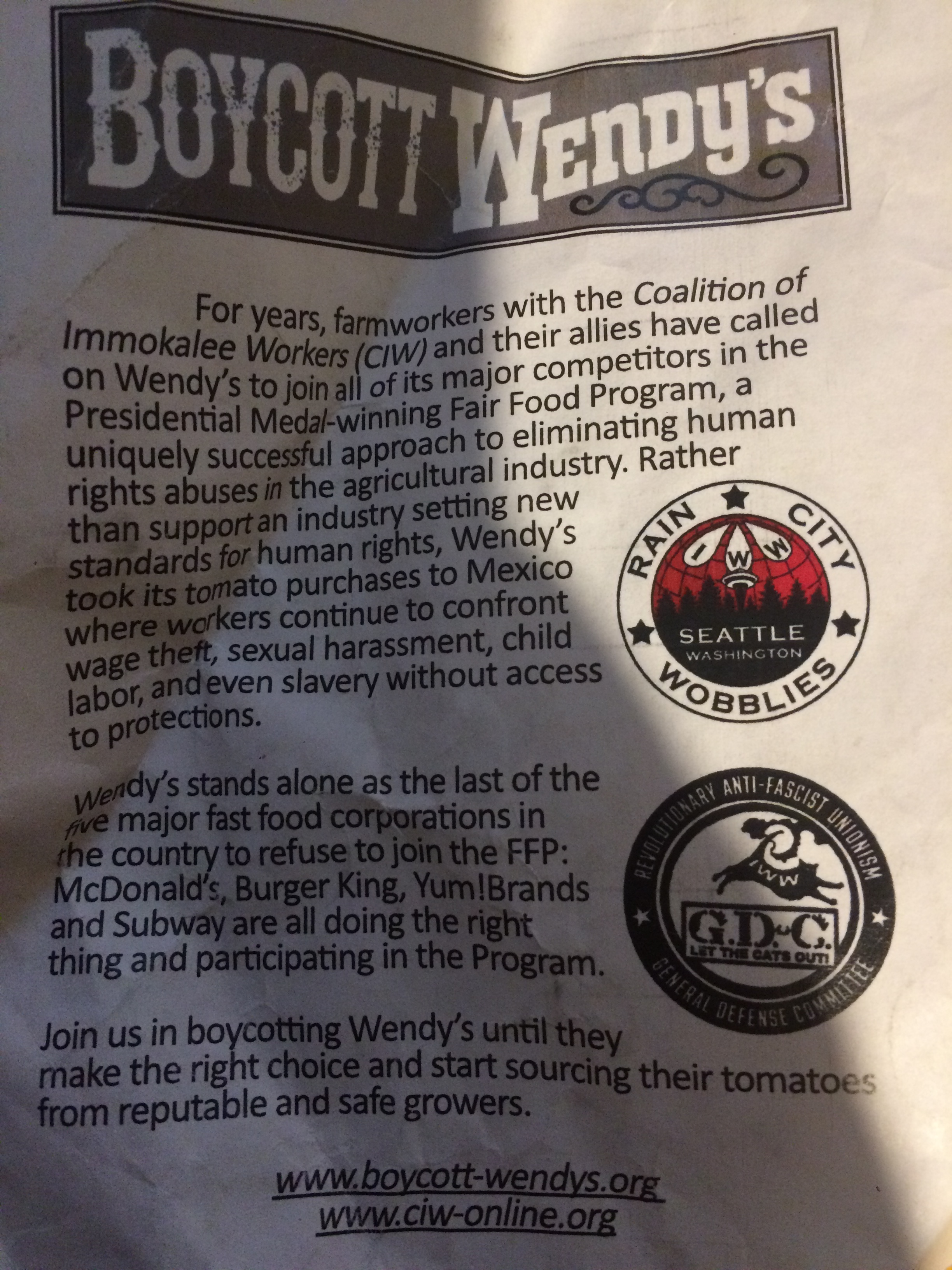 On May Day this year, I participated in a two-hour Boycott Wendy’s Protest on Rainier Avenue South. The point of the picket was not to criminalize misguided customers but to heighten awareness about Wendy’s, which sources its tomatoes from an agricultural industry in Mexico that has severe labor-rights issues, including engaging in gender-based harassment.

Wendy’s appears to be the last holdout that has not cut ties with this agricultural industry, as has other fast food chains, such as McDonald’s. The protest was held in solidarity with Coalition of Immokalee Workers and in support of the Boycott Wendy’s campaign.

In short, the food at Wendy’s is tainted, and around 40 protesters showed up between 6:30-8:30 p.m. to demonstrate against their practices. About 30 protesters were present at one point.

While most of the people we encountered accepted the demonstration and left, two drivers plowed through the picket line, leaving two protesters in need of treatment from street medics.

For May Day 2018, some groups called for a decentralized, anti-capitalist May Day.

In response, folks affiliated with the Industrial Works of the World (IWW) union organized pickets at two Wendy’s locations in Seattle: One in Lake City in North Seattle and the other on Rainier Avenue South in South Seattle. The picket in Lake City was reportedly “chill.” The one I witnessed in South Seattle, which was closer to where I live, was anything but chill.

It was heartening to see a group of people in action in support of farmworkers in Mexico and willing to put their bodies on the line.

Protesters endured gratuitous remarks from a few drivers. At least one seemingly intoxicated driver took issue with the fact that the picketers were supposedly only “white people,” duly ignoring my presence and the presence of several others.

Most drivers who reacted were supportive of the picket. They honked and made hand-gestures in favor of our actions. It was reassuring people noticed, cared about our demonstration enough to react.

At first, I was handing out flyers to confused Wendy’s customers driving south. Not so long after, I became more stationary as a May Day comrade handed me their picket sign, which read, “Boycott Wendy’s” on one side and “Justice for Farmworkers” on the other.

Moments later, one customer started driving slowly, but steadily, from afar with his right blinker on. Usually, the drivers did not seem to notice what was going on until they got very close and helplessly tried to talk us into letting them into the parking lot. Many left frustrated but without much more of a reaction. Some did not even stop. Instead, they turned off their blinkers and just sped ahead. By my count, only three to four (carpool) drivers threw angry words at picketers during our roughly 2-hour long picketing.

The apparently intoxicated driver while vocal in their opposition did not try to break our picket line but went to the cops to complain about the protest.

The other driver’s obsession with the situation was a bit unnerving because they spent about 20 minutes speaking with picketers. This particular driver and their passenger were using their phone to film their interaction with picketers.

Another driver, who I think was headed north, drove directly towards the picketers blocking the entrance. One picketer was holding a bike north-south to buttress the picket line. The driver stopped (or was stopped) after pushing the picketers further up the driveway.

However, after a few seconds, the driver just blasted through the picket line, knocking three or four people right and left. I think the person who was holding the bike suffered most of the attack and had the most severe contact with the ground and the offending car.

Everything was going so fast. But I think other picketers went forward to form a second picket line. One thing that surprised me was after the picket line was broken and the car was still moving, picketers jumped in to stop the car.

The person to my right (south) who was holding the bullhorn also fell down, as did a few others, after the first driver drove through newly formed picket line behind the first one. I was so discombobulated that I cannot now remember if it was at this time that the obsessed driver also broke through the first picket line. By this time, many people, including myself, were well inside Wendy’s driveway entrance. As the first scabber parked, cops and maybe one or two picketers were standing by his car.

By this time I had regained my composure, but other picketers were so furious, especially when the second driver attempted to break the second picket line. They started talking to the driver more vociferously, at which point my tribal instinct kicked in, and I pushed at least one picketer away from the driver’s door. My comrade gave me a bemused look for my apparent divided loyalty.

Then, the driver and the passenger asked me, “What are you doing here?” when you could be doing something with Black Lives Matter. I improvised an awkward response: “I do that too.” I will admit, a better response would have been, “An injury to one is an injury to all.” because I had just been chanting that slogan as the first car drove through the line.

When the driver argued they didn’t care about the action because they were not farmers, a picketer tried to explain the connection between racial justice and justice for farmworkers.

“[They] couldn’t see the connection,” the picketer complained.

I know several of picketers participate in racial justice actions as well. I think people should protest or support a cause because of its merits and not on the perceived demographics or politics of protesters/supporters.

Although there were very few counter-protesters of color, it was still jarring for me to see black people on the same side as (presumably) Neo-Nazi counter protesters because the protesters were supposedly only white people.

In effect, although they did not coordinate with the Rightists, these black people ended up siding with the wrong kind of white person to oppose potential allied, even if white, people. I am aware that some black nationalists form a common separatist cause with white nationalists. But at least one black counter protester mentioned Black Lives Matter at Wendy’s, which is a multiracial coalition movement with prominent black organizers on the frontlines. So I do not think any of the opportunist black counter-protesters were nationalists.

While everyone is entitled to their own opinion, their opinion is not guaranteed to be correct. The black people who confronted my comrades and me on May Day were unreasonable. Their reaction was worse than the customers who were just frustrated because they could not enter Wendy’s to buy food. If the counter-protesters actually knew the characteristics of the struggle for black lives, they would have joined the picketers because they clearly had the time. Or they could have listened instead of shouting and being belligerent. In fact, when they block roads while protesting various injustices, Black Lives Matter experiences the same opposition from inconvenienced white people.

The white driver who first broke the picket line did not interact with picketers at all, to my best observation. He did not read the flyer or asked what was going on. He just plowed through folks to counter-protest. It is not even clear if he planned to dine at Wendy’s. According to one picketer, his car was decorated with right-wing symbolism. (I think I heard it was Neo-Nazi type, but I am not sure.) Regardless, the cops talked to the driver inside Wendy’s, where the driver expressed concern over damages his car might have sustained when it hit pedestrians.

Later, everything was calming down and the cops started to intervene, telling picketers they were now on private property. The protesters gave only a terse negative response.

The other driver was finally let in but not before they broke the handle of a picket sign while trying to push through the picket line and angrily asking if their car was scratched earlier by a picketer who held a bullhorn on the hood of their car.

I am unaware of anyone being seriously hurt by the cars that hit them, but medics treated two folks. The first offender could have seriously injured protesters, but he could not gain dangerous momentum.

While these two drivers took responsibility for escalating the completely avoidable confrontation, there was also a carpool of three or so young lads who had earlier pulled over in the middle of Rainier Avenue South while heading south. They managed to snatch and throw a picketer’s phone to the ground.

The driver and a passenger in the back seat struggled over whether or not to steer into the picket line, the passenger intending to break the picket line. But they pulled over and got out of the car with the front wheels just on the divider line, blocking traffic for minutes during the arguments.

“I don’t care about none of this shit,” explained one of them.

Interestingly, there was a sharp contrast between the victims of the vehicle assaults who declined to speak to cops about criminal charges against the drivers and the offending drivers who indicated interest in some sort of civil suits for car damages as a result of hitting pedestrian protesters.

In the end, though, the picket was successful. I saw very few customers who dined at Wendy’s that night. In fact, at some point the restaurant was empty and the workers were able to come out and film some of the action.

2 thoughts on “A May Day Protest: Judging a Cause on Its Own Merits”