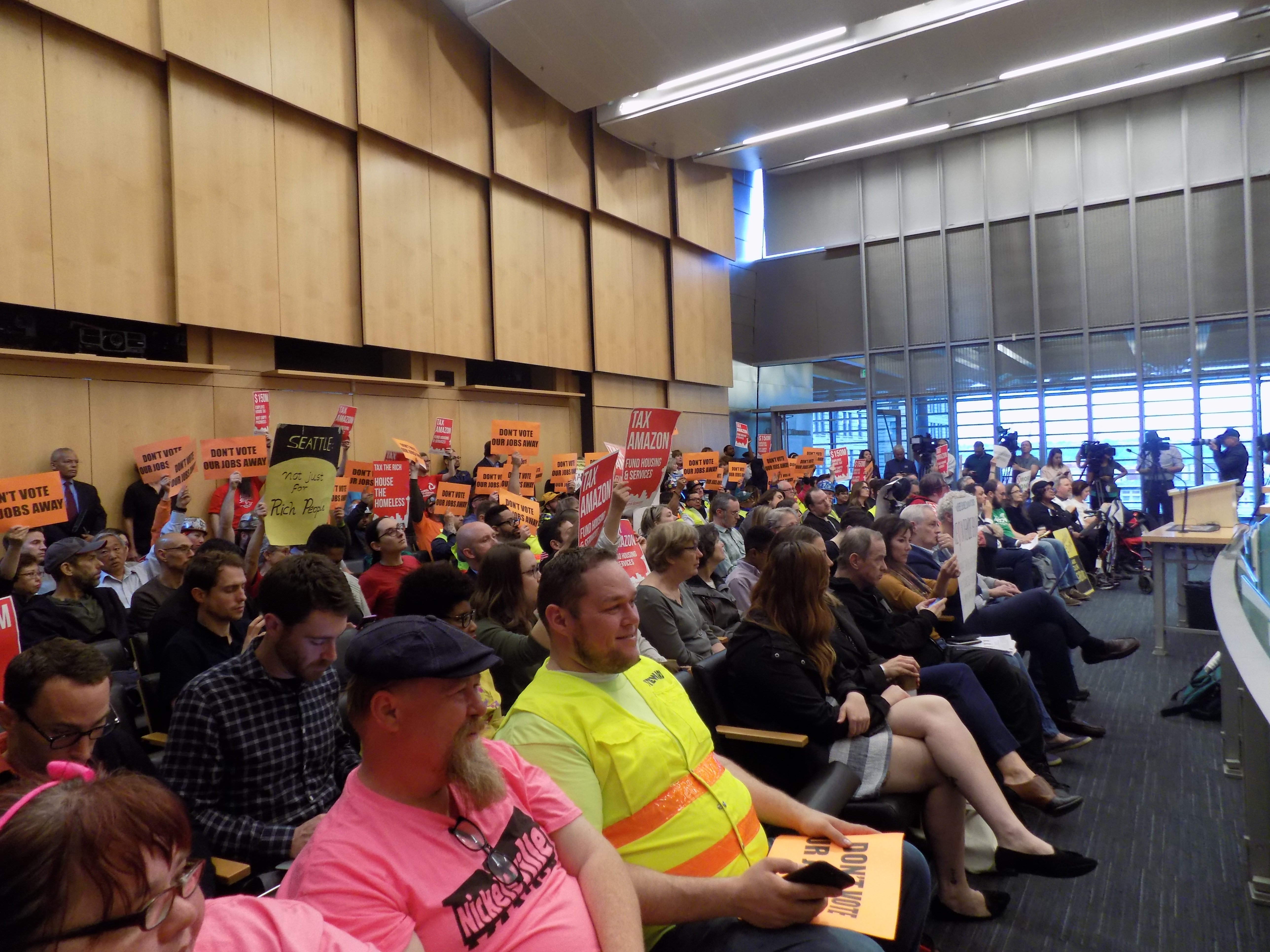 One way to judge a society is to look at how it provides for its poorest people. Seattle is debating the scale of the hospitality it will provide in the form of controversy over the Employee Head Tax proposed by members of the city council. The Finance and Neighborhoods Committee is set to vote on the new tax tomorrow in a session starting at 9:30am.

The proposed head tax would apply to employers grossing more than $20 million annually. The large employers, including grocery chains, construction firms, and tech companies like Amazon, would pay about $500 a year per employee to go towards relief for the homeless crisis.

Amazon would stand to pay an extra $20 million a year with the new tax and in response has ceased construction on a new office tower in Belltown and is threatening to sublease another office tower it constructed in the city pending the city council vote on the new tax.

Wednesday morning, one of two public comment periods that day gave Seattleites a chance to speak out on the proposed tax. The first speaker to approach the podium wore a reflective vest and a construction helmet emblazoned with the Stars and Stripes. Behind him, a wall of orange and black “Don’t vote our jobs away” signs competed with the red signs in the audience.

Jimmy Hawn, who has become a fixture of the opposition protests, addressed the council. “Job sites are a classroom. 92 percent of our apprentices’ training is on-the-job. If jobs are lost, we lose a classroom and the city of Seattle loses the opportunity to get people out from under very issues that you are trying to fix.”

Seattleites, both for and against the measure jammed the council chamber with many having to wait outside. In the recent weeks, Councilmember Sawant’s tactics have been turned against her by members of trades industries who have shown up to counter-protest her speaking engagements.

Opponents argue taxing the number of employees will lead to companies hiring fewer people, while proponents argue that the large employers bringing new workers to the city drives up home prices and exacerbating the homelessness crisis. The city began discussions of the new tax through the foundation of the Progressive Revenue Task Force in November made up of local business and community leaders coming together to discuss solutions to the homelessness crisis and make recommendations for new funding sources.

The City Council expects to raise about $75 million per year to be set aside for housing and homelessness services if the tax passes. Right now, the council has five members supporting the measure: M. Lorena González, Lisa Herbold, Theresa Mosqueda, Mike O’Brien, and Kshama Sawant. Five votes are enough to pass the measure, with one more vote, the council could override a veto from Mayor Durkan who said in a statement last week, “What we have on the table now doesn’t meet the requirements I have as mayor, and that is very clear.”

In a response statement to Amazon’s pause in construction, Seattle Councilmembers González, Herbold, Mosqueda and O’Brien said, “Seattle has become the nation’s biggest company town. We’ve shifted to a service-based economy; only a handful of services are taxed, and they are virtually all provided by blue-collar workers. Washington State doesn’t tax income or capital gains, and at the city level, we’re left with very few options to raise the resources we need.”

The group concluded the statement saying, “Our charter requires us, as elected officials – as a city, to protect and enhance the general welfare of people. We’ve added hundreds of new shelter spaces in the last couple years and moved more than 3,000 people out of homelessness and into permanent housing just last year, yet more than 3,800 people sleep outside in Seattle every night. Thousands more compete for shelter and temporary housing. We have an opportunity to treat Seattle residents humanely and with dignity.”

Supporters of the tax measure also showed out in force Wednesday. Kelli Larsen, Chief Program Officer, with Plymouth Housing Group, a non-profit focused on housing services addressed the council. “The crisis of homelessness is undeniable. Our leaders declared a state of emergency years ago without the funding to make a difference,” she said. “Now we have more people sleeping outdoors. The data and evidence are very clear permanent housing is the answer. Housing is what the people want. Housing saves lives. Housing saves money for our community. More housing will make our city better.”

Estela Ortega, the Executive Director of El Centro de la Raza spoke before the gathered assembly as well. “City Council, I ask you not to let Mr. Bezos’ threats dictate our public policies or weaken our city’s commitment to having Seattle be a first class city for all its people,” she said. “Companies like Amazon and other businesses in Seattle benefit greatly from being located in the Emerald City, a city that is advantageous for attracting talent at all levels of the corporate structure. Councilmembers, mi gracias for doing your jobs.”

The issue ultimately comes down to whether or not you believe the city should provide shelter for people living here. Market-based development and charity have existed in one form or another in the city for almost 150 years and have failed to find a solution for homelessness.

Regardless of the results tomorrow, Seattle’s homeless crisis will continue for the foreseeable future. The vote will determine if Seattle’s current experiment with taxation for homeless services will continue or restart in a new form. If the resolution passes in a committee vote tomorrow, it will most likely go for a city council vote Monday.