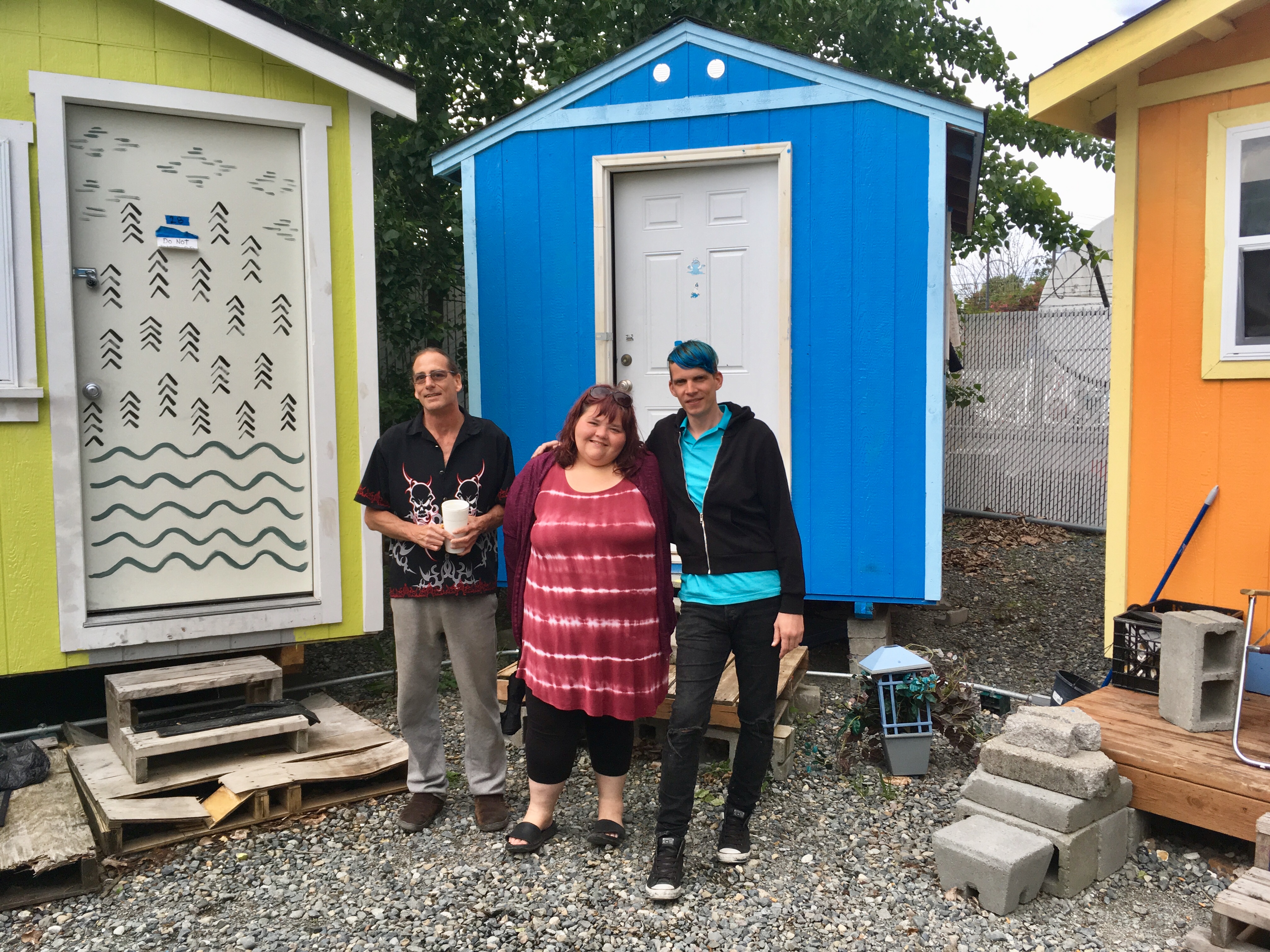 Tucked behind a Shell gas station on the corner of Ellis Avenue South and South Myrtle Street in Georgetown, the Nickelsville Tiny House Village is home to residents who can offer informed perspectives on the Seattle City Council’s proposed Employee Head Tax (EHT). A large group of Nickelsville residents, from the Georgetown location and others like it across the city, attended the North Seattle Town Hall last week to participate in what they hoped would be a productive dialogue about the need for a more aggressive policy to fund affordable housing. Instead, they witnessed a screaming match that compelled the Council to scrap its agenda and adopt an open mic format and set strict time limits on audience feedback.

Courtney O’Toole and Andrew Constantino, residents of Nickelsville in Georgetown, are qualified to speak on the topic of the EHT and last week’s disastrous meeting. Courtney has called Nickelsville home since March 2017, and before that, she lived with SHARE (Seattle Housing and Resource Effort), which organizes 11 shelters in churches around the city. Although she has a disability that prevents her from working, Courtney remains active in the community by advocating for the rights of homeless people. She regularly attends meetings like the North Seattle Town Hall and participates in the Progressive Revenue Task Force.

Andrew has also lived in SHARE shelters prior to moving to Nickelsville in September 2017 with his partner, Hattie, who works at a retail store downtown. They were priced out of their Ballard apartment years ago. When Andrew and Hattie first encountered financial struggles, Andrew admits they didn’t realize how bad it was. “We had our apartment; we were playing video games, working, being broke. We didn’t realize that you can never lose that because you’ll never be able to get back up. Now we do realize it. There is no way out. So, we accept it. Am I gonna learn to code computers or build a jet any time soon? No. Get used to it, this is life now.”

When asked about their thoughts on last week’s meeting, Courtney and Andrew both believe that the Council is doing its best to propose a reasonable solution to a seemingly intractable problem, but they also agree that not all its members seem genuinely invested in the work it will take to implement the proposal. Although Andrew was shocked by the behavior of some of the Town Hall attendees attacking Mike O’Brien—a Councilmember who has visited Nickelsvilles and worked closely with homeless people—he sees common ground with these critics.

“It would be easy to call them hateful, prejudiced people, but I can see some validity to what they’re talking about,” Andrew observes. While he agrees with critics of the Council that the city of Seattle doesn’t always spend money wisely, he is concerned that opponents of the EHT who spoke at the meeting are attributing greater social ills to homelessness without understanding that the homeless don’t have access to mental health or addiction treatment.

Most importantly, however, Andrew and the other residents of Georgetown’s Nickelsville—one of six city-sanctioned encampments—wish that their lives and community were more widely understood. Nickelsville first emerged 10 years ago as an unsanctioned homeless camp named after then Seattle Mayor Greg Nickels, who routinely ordered sweeps of the camps in the interest of public health and safety. Groups of homeless people found places to resettle after each sweep until 2015 when the city finally sanctioned three camps.

Today, Nickelsville is an amazing example of what can happen when the city sanctions safe, organized tiny home communities for the homeless. At the Georgetown Nickelsville, there are about 37 tiny homes and two larger dormitory tents in which approximately 65 people reside.  At the Georgetown Nickelsville, there is a large kitchen tent with clean refrigerators and a “shower tower” that contains a well-kept laundry area and a spotless shower room. And all of this is possible because everyone who lives there is responsible for keeping it a safe, clean living environment. Andrew proudly states that “Nickelsville is an example to every city. It’s an example nationally. [Seattle] doesn’t even realize the good that it is.”

One element that makes Nickelsville a great place to live is its strict code of conduct—no stealing, no drugs or alcohol, and no violence—and its focus on self-management and democratic values. The residents meet weekly to discuss issues and make decisions, and they attend Community Advisory Council meetings with their housed neighbors to discuss issues that affect them. The advantage of the self-management model is that unlike county or large-scale nonprofit shelters, “there’s no one telling you to clean up your mess or checking boxes on a piece of paper –no one here has any financial incentive to do shit for you,” says Andrew. This makes it a better environment for people who have been disenfranchised after years of struggling through the referral lines of more established organizations.

In other words, Nickelsville is something to fight for, which is why Andrew, Courtney, Hattie and their community members are looking forward to the Council’s decision about the EHT on Monday, May 14. “It’s a big day—we’ve been working on this for months,” Courtney says. “I hope it passes.” If it does, more money will go to building communities like Nickelsville—approximately 100 tiny houses per year—that can provide immediate, safe and reliable shelter for those in need. The Georgetown Nickelsville cost about $350,000 and took two months to build: it shows how far more funding can go to create more humane living spaces for the city’s thousands of homeless people.

Although the debate surrounding the EHT has gotten heated recently and has caused Amazon to halt construction on its H2 projects, Andrew isn’t too concerned because he sees it as a moment of truth. “It would be easy for [Amazon] to be nice and sweet talk people behind closed doors but taking a stand that shows it cares about nothing except profits reveals it for what it is, and that’s good.” The Nickelsville residents have revealed who they are and where they stand, and now it’s the Council’s turn.