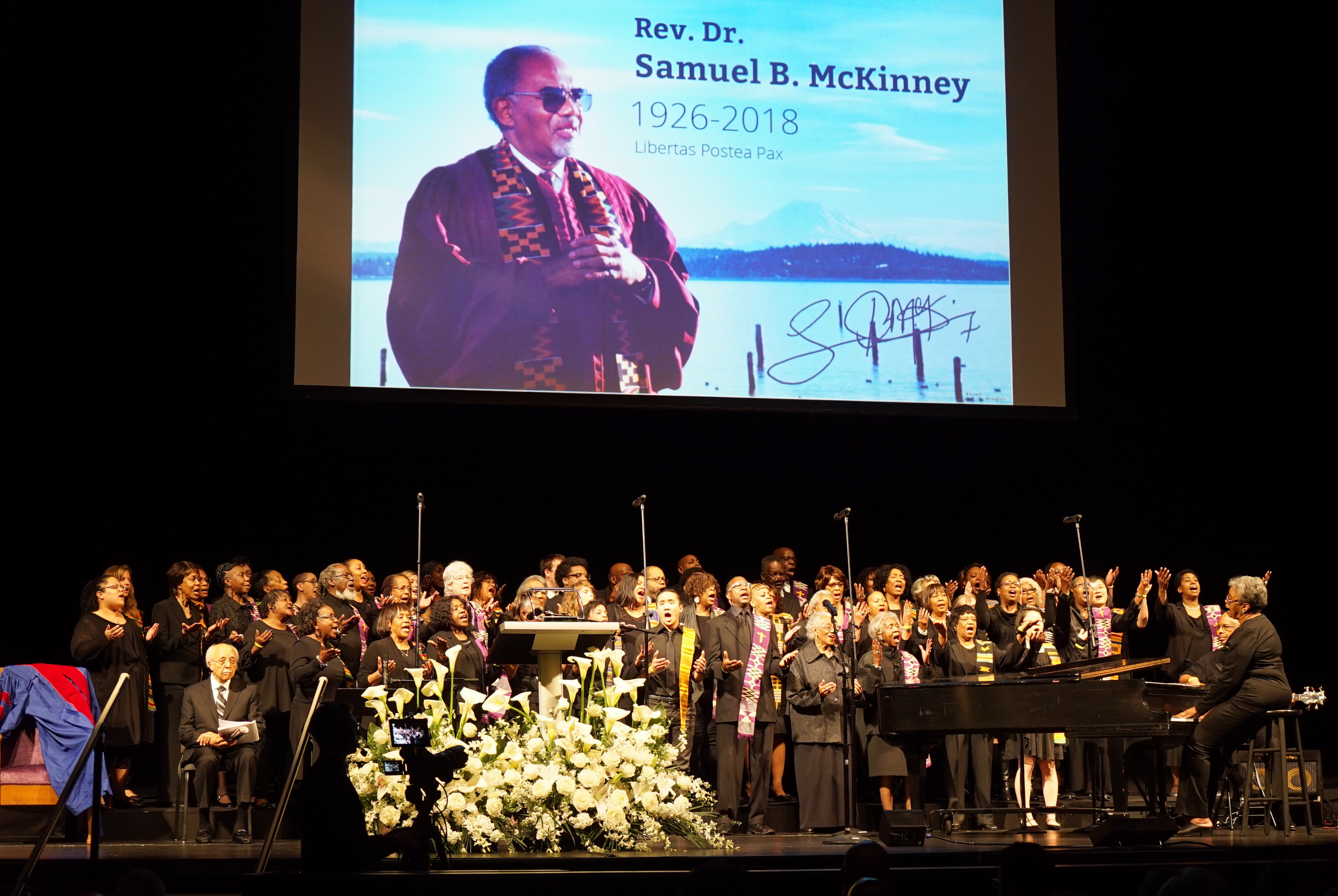 As hundreds streamed into the lower bowl of McCaw Hall to pay their respects to the late Rev. Dr. Samuel McKinney on Tuesday morning, I overheard Mertiss Thompson, who was sitting behind me,  comment on the significance of the turnout:

“I went to a funeral once where there was only three people in attendance: me, the pastor, and the man in the casket,” he said. “The kind of life you lived is judged by who shows up for you when you die.”

Indeed, senators, mayors, county executives, parishioners, family, and friends showed up as flesh and blood testimony to what the pastor, protector, prophet, civil rights leader, Morehouse alum, and generational pillar of Seattle’s black community had achieved with his 91 years of life.

The service ran long. There were too many words to say, too many stories to tell, and too much love to share for a man who for five decades pastored from the pulpit of Mount Zion Baptist Church on Capitol Hill. In the end, what stuck with me was not any one story, but the culmination of it all, a truly complete life.

During the opening hymn, Phyllis Byrdwell’s muscular timbre filled the room as I considered what was different about this ceremony. I thought of how often I’ve reported on and witnessed the swift shortchanging of a life by a bullet, an irrevocable decision, or circumstances beyond the control of the prematurely deceased.

Too often, the stories told at these funerals all end too abruptly. There should have been so much more to write about, so many more passions pursued, lives touch, before time itself dulled the pen.

Tuesday brought that reality to life for me. Rev McKinney had passed away a month ago, but there were few tears on the day from those in attendance. No, it was a time to celebrate a novel of a life with multiple chapters, points of view, and twists and turns, a story with a satisfying epilogue.

I have to confess that I never personally knew Rev. McKinney, though I call his daughter Lora-Ellen a friend. And though my brother worked at the elder care facility where the Reverend once lived, the majority of my interactions had always come second hand. My life’s thread never directly entwined with his during the reverend’s active years. I was too young.

Still, my life was warmed by the light his emanated.

Walking to the service, I bumped into Pastor Richard Rivers, whose “street ministry” in Skyway has helped alter the lives of many young people, including me. He was an understudy of Rev. McKinney’s and one of his caretakers for 6 years after the reverend’s wife Louise died.

I saw Norm Rice, Seattle’s first black mayor, take to the lectern to remember the man who once baptized him. As a second-grader at St. George Catholic school, I hoped to someday be just like the mayor. Political cynicism has since redirected those hopes, but I still felt the resonance as he admonished those in attendance to “reach into the darkness and pull someone into the light.”

I listened as Lora-Ellen spoke about the time her father, preaching from the pulpit, continued delivering his sermon even as a man approached him with a gun in his hand. Rev. McKinney waited until the man was directly in front of the pulpit before knocking the gun out of the would-be assassin’s hand. Assistant ministers tackled the man, and McKinney didn’t so much as shift octaves as the congregation slowly recognized what had just transpired.

Each story, each tale, each slice of life served up on Tuesday offered a glimpse of humor, pathos, mystery, and endurance. It also re-taught a lesson.

I have long been skeptical of the abudance of importance heaped upon “black role models” in the struggle to empower a demographic assailed by disproportionately higher incarceration, school disciplinary, preventable death, and unemployment rates. But I would scale the summit of dishonesty if I disregarded their influence on my life.

Lives well lived ripple through a community. The stories of the mightiest become interwoven with our own, the good deeds serving as an example for those fortunate enough to be nearby and the many others who are just a step or two away.

Rev McKinney’s life may be over. However, his life’s work is in many ways just beginning.