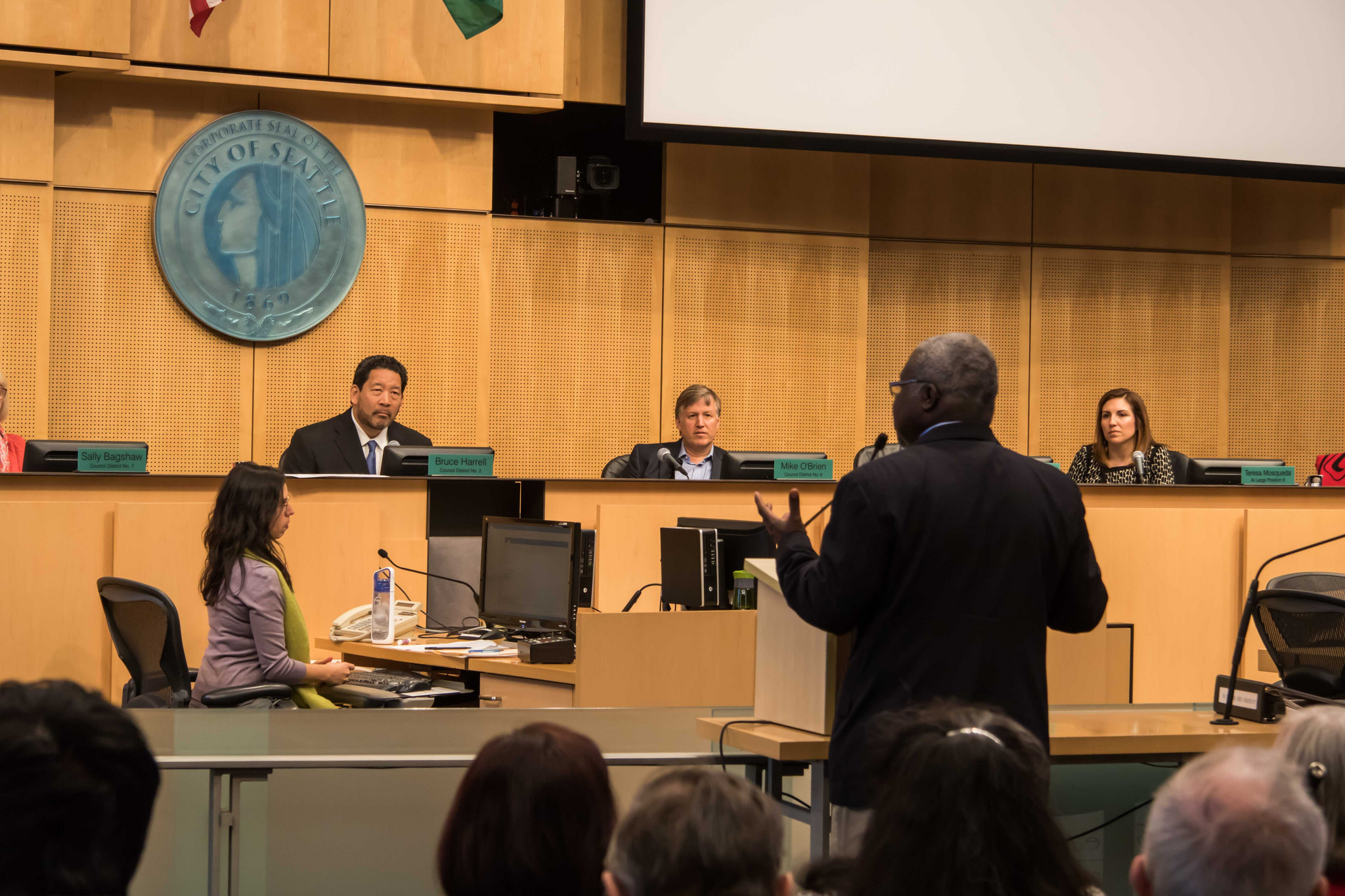 Friday morning in a Finance and Neighborhoods Committee meeting of the Seattle City Council, councilmembers voted on the Employee Head Tax proposal. The council chambers buzzed with speculation of a competing tax proposed from Mayor Durkan that would tax employee hours at half the rate of the council’s version.Mayor Durkan’s version of the tax would raise a little over $40 million a year instead of the original $75 million which would go toward housing and homelessness services.

Voting took place in a maelstrom as attendees in the audience chanted “Seventy-five, Seventy-five, Keep Our Homeless Neighbors Alive” and “We Are Ready to Fight, Housing is a Human Right.” Supporters bearing red signs of “Tax Amazon,” and “Fight Bezos Bullying” were once again out in force, but this time, the helmeted counter-protesters were absent.

On the dais, a flurry of amendments regarding the new tax bill sped out by a team of legislative assistants were snatched up by the press sitting in the front row. Most councilmembers reaffirmed their support for taking some action to address the homeless crisis. Up for debate was the amount to be raised, the time frame for the tax, and whether the tax would lead to a payroll tax.

Councilmember Sawant even introduced an amendment to increase the head tax from $500 an employee to $1,000 an employee, raising the amount raised for the homeless crisis from $75 million to $150 million, still short of the $400 million cited by a recent report compiled by McKinsey & Company, which asserted it would take $400 million to successfully combat the homelessness crisis Seattle faces.

The mayor’s plan, referred to as the “Bezos-Durkan Deal” by speakers in the public comment period, drew support from Councilmembers Bagshaw, Harrell, Johnson, and Juarez. The coalition for the original tax plan remained firm with the support of Councilmembers González, Herbold, Mosqueda, O’Brien, and Sawant.

During the mayoral campaign, Amazon contributed $350,000 to Jenny Durkan’s campaign through the Civic Alliance for a Sound Economy (CASE), an organization sponsored by the Seattle Metropolitan Chamber of Commerce. With Mayor Durkan’s version of the tax, Amazon would save about $10 million a year.

The council as a whole could vote on a new law as early as Monday. Though the council needs just five votes to pass the law, in order to negate the possibility of a veto by Durkan, proponents need 6 votes in favor, though Durkan has not said whether she will move to veto if given the opportunity.

Clarification: An earlier version of this article stated that the Seattle Metropolitan Chamber of Commerce commissioned the McKinsey and Company report. The Chamber did not commission the report. They put McKinsey in touch with key stakeholders as they compiled their independent findings. The Chamber also served on a steering committee briefed on early findings, along with leaders from the City of Seattle, County, and philanthropic representatives.