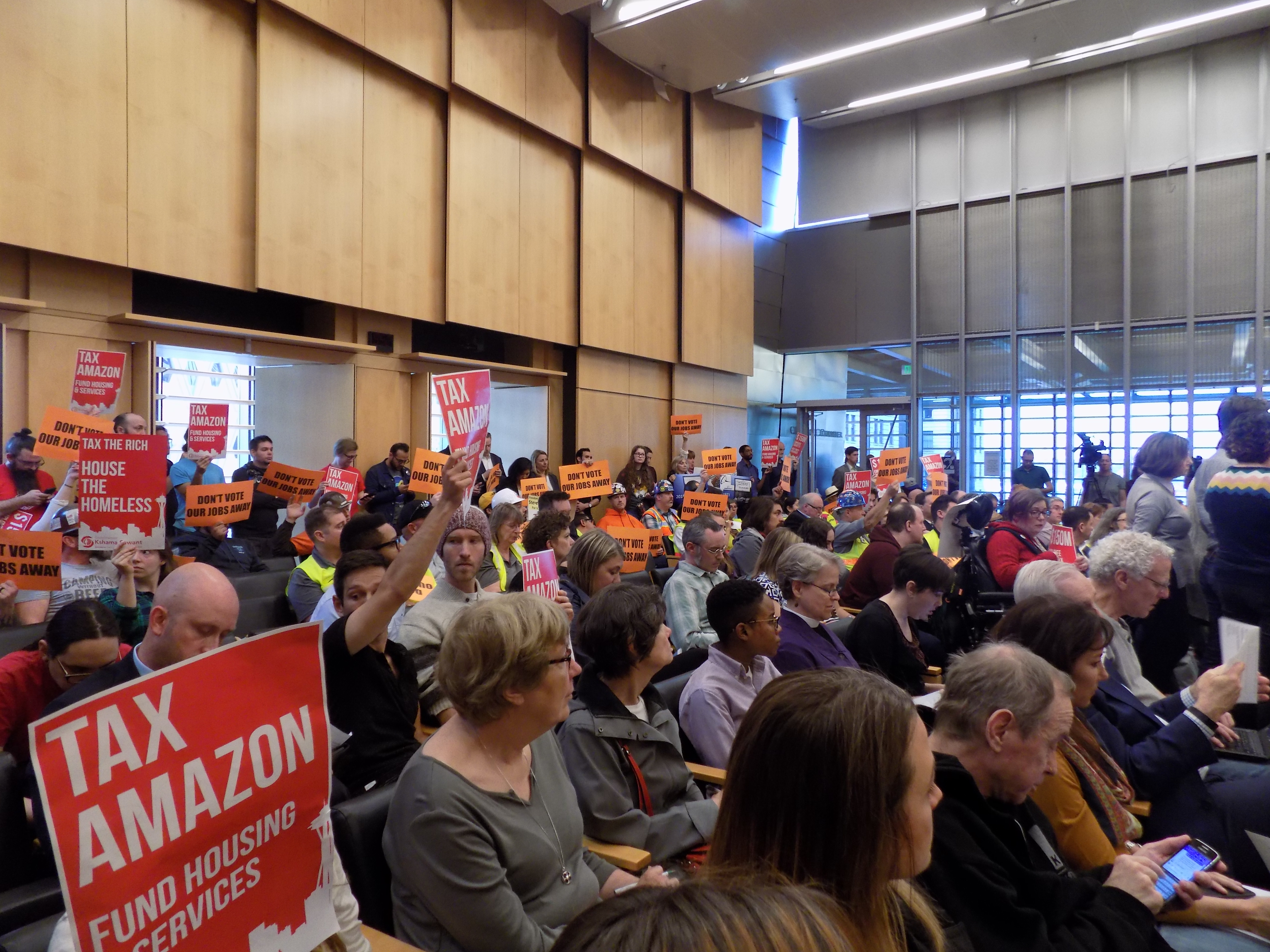 Weeks of tense negotiations, heated yelling sessions, and a high-stakes game of chicken between Seattle’s biggest employer and the city council culminated on Monday afternoon in a unanimous council vote to approve a $275-per-employee “head tax.” But what does the vote mean? Is Amazon’s threat to abandon the city off the table? And where does Seattle go from here?

We have put together a handy primer to answer these and other pressing questions about this latest effort to address the growing homelessness crisis in Seattle.

Obviously, a few hundred additional housing units is far from enough to house the more than 8,500 people who were homeless in Seattle at the beginning of 2017, according to All Home’s most recent homeless census. In fact, it is significantly inadequate, since that number has likely only increased over the past year.

The county needs an additional 14,000 units of affordable housing just to address the current needs of people experiencing homelessness in King County, according to a report from the consulting firm McKinsey & Co. Building that much housing and addressing the other needs of King County’s homeless population would cost the public and private sectors $410 million a year, the independent report concluded, and that is only if the annual rate of people falling into homelessness does not increase. King County would need to spend between $164 million and $215 million a year to pay its “share” of that $410 million total.

Michael Maddux, a staffer for council member Teresa Mosqueda’s office, crunched the numbers in the report and determined that Seattle’s “share” of that countywide total would be somewhere between $59 million and $79 million per year. The $47 million in annual spending that the $275 head tax should provide falls short of the bottom end of that range.

The council approved a resolution recommending a spending plan that took the opposite approach, emphasizing housing over temporary shelter. However, the real debate will come later this year when Durkan proposes an implementation plan for the tax as part of the city’s annual budget process. (The spending plan adopted this week sets the council’s priorities, but is itself a nonbinding resolution.) The implementation of that plan and the unwinding of the budget process will give proponents of the Durkan spending model another opportunity to recalibrate the spending balance in the tax proposal.

Interestingly, one group has already recommended the city do the exact opposite of what Durkan proposed in her original spending plan. The city’s adopted Pathways Home plan directs the city to focus its homeless service spending on programs that get people off the streets and into “permanent housing” as quickly as possible. Last year, the city adopted a spending plan for homeless service providers that eliminated funding for a large number of basic shelter beds, on the grounds that those shelter providers failed to demonstrate they could move their clients into permanent housing quickly. Pathways Home is controversial, in part, because it penalizes nonprofits that serve the hardest to house. However, the “housing first” principles underlying it are in line with the McKinsey report that suggests a lack of housing is the fundamental problem underlying Seattle’s homelessness crisis.

The problem with any municipal spending plan that fails to house enough people to make an appreciable dent in the homelessness crisis is that it opens the city to the predictable objection that “no matter how much money we give them, the problem keeps getting worse.” And the problem with any spending plan that takes large enough numbers of people off the streets and stuffs them into new shelters and “tiny house” camps is that those shelters become ways of warehousing people indefinitely.

Meanwhile, the problem with spending the amount experts consider “enough” is that it tends to inspire fierce pushback from the business community. (We may need $69 million from Seattle and $120 million from the rest of the county.) Amazon threatened to stop construction on one of its downtown projects over the original $75 million head tax proposal and said on Monday that the adopted $47 million tax “causes us to question our growth here” in Seattle. That kind of talk tends to send those who have benefited from the recent Amazon-fueled boom, such as homeowners who have seen the value of their properties skyrocket to an average of $820,000 over the last few years, into a tizzy. Amazon may not leave Seattle or even slow its growth here. The company’s latest statement was “passive-aggressive and vaguely threatening,” according to the business magazine Fast Company. Yet, the possibility that the company, which just reported $1.6 billion in quarterly profits, might retaliate against the city remains an axe the company is more than happy to hold over the heads of those who have benefited from its success.

4 thoughts on “Six Things to Consider About the Head Tax”