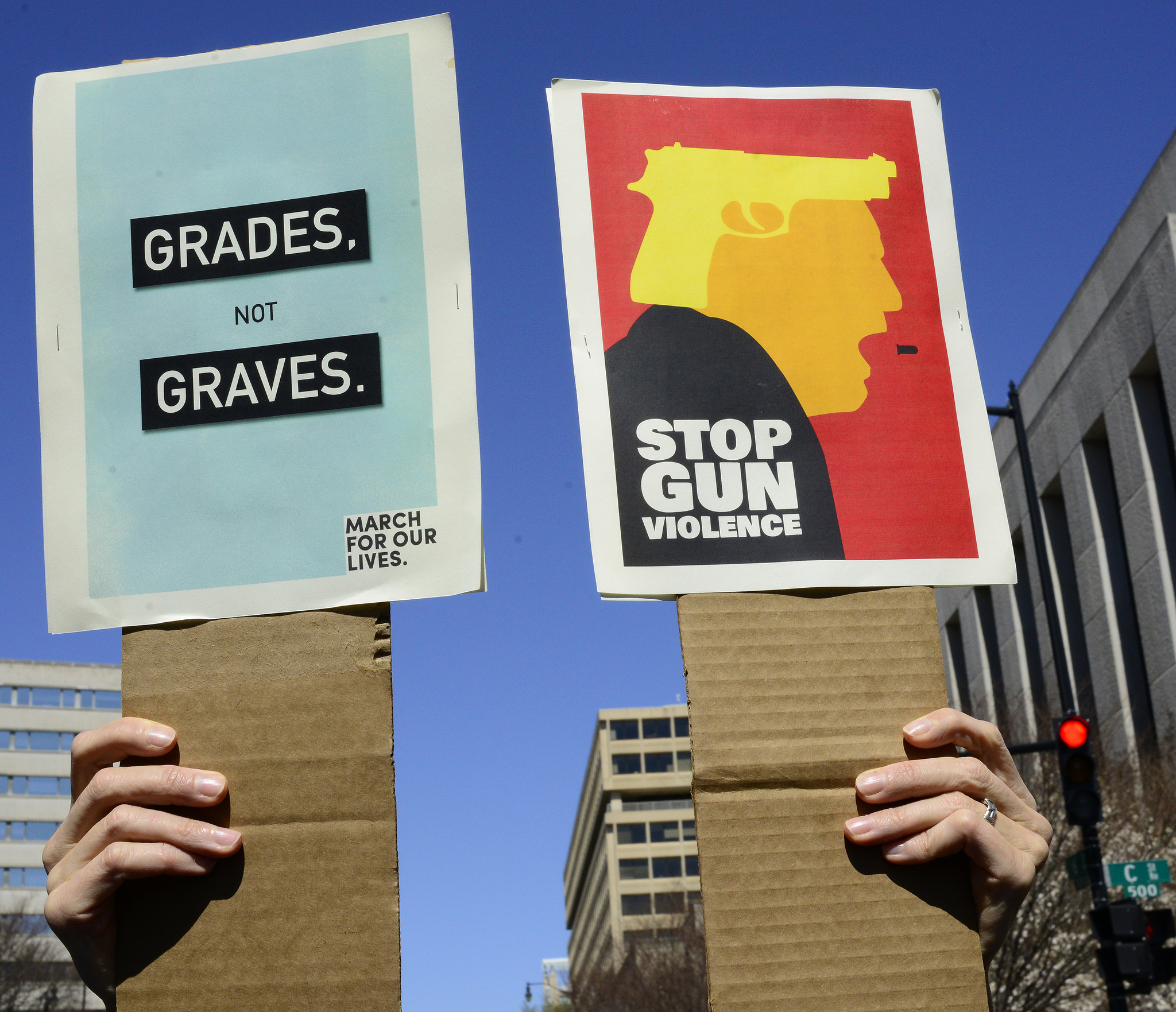 We might already hold the key to decreasing gun violence

The killing of ten people and injuring of thirteen more in Santa Fe, Texas on May 18 marks another terrible and terrifying moment in this country’s ongoing struggle with gun violence. This most recent incident represents the 101st mass shooting to occur in the United States in 2018, according to the Gun Violence Archive (GVA). So far this year, the United States is averaging 1 mass shooting every 1.35 days. At that rate, we will see 270 mass shootings before the end of 2018. As shocking as that number is, though, it would be the lowest number of incidents per year since 2014, the first year GVA began archiving records.

The GVA began its work in 2012 after its founder Mark Bryant and others recognized no other agency or organization was reliably reporting gun violence statistics. The GVA operates independently out of Lexington, KY to document incidents of gun violence and gun crime nationally. They collect and post data from over 2,500 media, law enforcement, government, and commercial sources daily. Their hope is that “this information will inform and assist those engaged in discussions and activities concerning gun violence, including analysis of proposed regulations or legislation relating to gun safety usage,” according to their mission statement.

In compiling their statistics regarding mass shootings, the GVA counts any incident where four or more persons are shot, not including the shooter. They do not consider the circumstances in which the incident took place, and they do not include the ~22,000 annual suicides in their daily summary ledger.

While many researchers and almost all major US media outlets rely upon GVA statistics, everyone admits there is no uniform definition for “mass shooting.” For comparison, the GVA’s definition echoes the one used by the Federal Bureau of Investigation; however, it differs from the one stated in the Investigative Assistance for Violent Crimes Act of 2012 (IAVCA), which defines a mass killing as one with at least three deaths, not including the perpetrator. (The authors of the IAVCA do not count injuries, only fatalities.) Other definitions label a mass shooting as any event involving the shooting of four or more persons without “a cooling-off period,” such as with a serial killer; while still others differentiate between mass shootings, mass gang shootings, and mass shootings in which victims are related familially, which all fall into other gun violence categories.

In this cacophony of definitions, what makes the Gun Violence Archive’s numbers the most compelling is their independence from official sources that regularly underreport injuries, reliance on a wide selection of sources, and more expansive definition because they count injuries as well as fatalities. It might be best is if all jurisdictions were required to report all incidents of gun violence more transparently. (The Walter Scott Notification Act, for example, calls for the creation of a federal database on all shootings committed by police.) Until then, the GVA provides the most complete statistics on all aspects of gun violence in the United States.

To be clear, 270 mass shootings is still 270 too many. Even one more death or injury is awful for everyone involved. Yet, it may be surprising to learn that since 2016, the frequency of mass shootings has been falling. (The number of deaths and injuries from mass shootings has not been declining as steadily, leading some researchers to argue that although there have been fewer shootings, they are becoming more severe, but these studies remain ongoing.)

If we were to stay on the present course, or if the incidence of mass shootings were even to decrease further, we could find ourselves on the downside of a trend of escalating gun violence in this country.

Recently, Chicago reported it was seeing a decrease in gun violence for the 14th consecutive month, including a 27% drop in shootings since the beginning of 2018. California, New York, and Texas—despite drastically different gun laws and gun cultures—have also seen a consistent drop in mass shootings of late.

In Washington State, we have had one mass shooting thus far this year: the April 29 incident in Skyway that left two men dead and two men injured. As with the national trend, if incidents continue at the current rate, we could see the least mass shootings in the state since 2015.

But, why? While it may be too soon for anyone to provide definitive analysis of the scenarios, several theories have been put forward to explain what we might be doing to move us in the right direction regarding gun violence in the United States.

“Although we have much work ahead of us to achieve our goals,” Chicago Police Superintendent Eddie Johnson said in a statement, “I’m proud of the work our men and women have done—in partnership with residents and community leaders—to drive fourteen months of sustained gun violence reductions in Chicago,” according to WGN TV, Chicago.

Overall, the Chicago police have cited more and better technology and more and better policing as the primary factors driving down the number of mass shootings in the city. They have mentioned gunshot detection systems, predictive crime software, surveillance cameras, and new cellphone technology alongside the fact that they have added more than 1,000 new officers to the police force.

In addition, police officials have also discussed “reforms intended to build stronger community partnerships and engagement with residents, who have long been mistrustful of the police,” according to a May 1 report on CNN. It is unclear whether these initiatives have had the effects police attribute to them, and in the past in Chicago, we have seen incidents of gun violence fall, only to see them rise again soon afterward.

At least, though, this last point harmonizes with the claims of some community organizers that community-based initiatives have had an effect in lowering the gun violence rates nationally. (We would have to look closely at the results of programs begun or administered by institutions and ones started or run by communities. As well, we would have to ask if vastly different approaches to community-based initiatives from around the nation would translate from location to location.)

Still, other researchers have postulated that the generational trend of lower levels of gun ownership have had an effect on the incidence of mass shootings. Younger Americans are less likely to own guns. However, those who do own guns are more likely to be more deeply embedded in gun culture, according to some sources. (So, again, we would have to look carefully at the studies on generational differences and how to measure this impact.)

Finally, experts have argued that more restrictive gun sales and more comprehensive background checks implemented over the last few years—restrictions on gun ownership generally—have limited access to guns, and in so doing, have helped lower the mass shooting rate. (A recent piece from Stateline offers multiple perspectives on the efficacy of these recent laws and again raises the question of whether such laws would have the same or similar effects across different jurisdictions.)

Of course, almost all of these claims are based on demonstrating correlations rather than causation, and correlation does not prove causation, so all of this research remains open to critical analysis. Such an inconclusive conclusion may feel unsatisfying. However, it points to a singular problem in the debate over gun violence: while we may feel certain things and suspect certain trends or relationships, we do not yet have definitive evidence regarding the links between our actions and these results.

In this regard, the non-partisan RAND Corporation’s “Gun Policy in America” initiative, headed by Andrew Morral, released a report earlier this year finding much of the gun violence research we have: “inconclusive.” The RAND study documents what may be the most comprehensive analysis of “thousands” of gun-law research projects from the past several decades. What they conclude, however, is quite modest. We can say there are two groups of gun policy experts—those who favor more permissive gun laws and those who favor more restrictive gun laws. We can say that both groups of experts agree we should work to reduce gun-related homicides and suicides. Beyond that, though, we cannot say much definitively about the means of achieving such a reduction.

What RAND found was that of all the research they analyzed, neither more permissive nor more restrictive gun laws conclusively explained changes in the number of mass shooting incidents. In the end, then, they concluded that more research is needed. “Many of the matters that people disagree on when they disagree on gun policy have not been rigorously studied in ways that produce reasonably unambiguous results,” said Andrew Morrall in a May 2018 VOX interview.

Furthermore, the RAND report unequivocally states that gun violence research needs to be more fully funded, calling on federal and private entities to support the gaps in current research allocations:

To improve understanding of the real effects of gun policies, Congress should consider lifting current restrictions in appropriations legislation, and the administration should invest in firearm research portfolios. Moreover, given current limitations in the availability of federal support for gun policy research, private foundations should take further steps to help fill this funding gap by supporting efforts to improve and expand data collection and research on gun policies.

They specifically cite the need to involve and fund research through the Centers for Disease Control (CDC), which since the 1996 Dickey Amendment has been hindered in its efforts:

To make important advances in understanding the effects of gun laws, the CDC or another federal agency should resume collecting voluntarily provided survey data on gun ownership and use.

It would be the best of all possible outcomes if the May 18 shooting were the last such incident of 2018. (Since it has been at least a day since the writing of this article, it sadly probably has not been.) However, as downward as the trend has been since 2016, it has not bottomed out yet. It is too early to tell where we are headed, but perhaps we are doing something right with regards to diminishing one aspect of gun violence in the United States—mass shootings. Although mass shootings represent only a small fraction of gun violence incidents each year, they have a significant effect on policy debates, so studying them further could help us work the problem in other areas as well, especially where it intersects with concerns over suicide rates and mental health issues, intimate partner, and domestic violence, and officer-involved shooting incidents.

One thought on “Over 100 Mass Shootings”