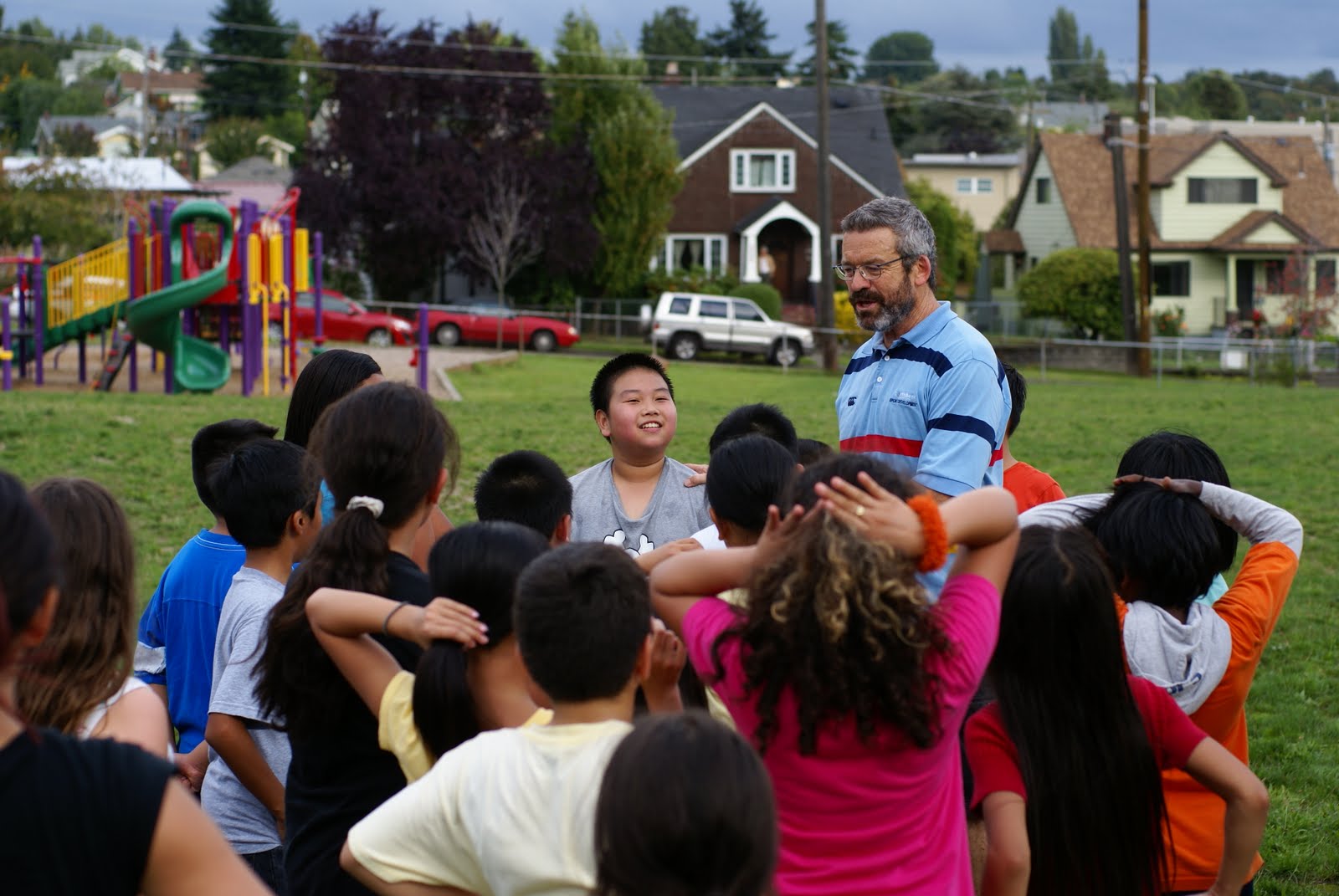 Under state law, children are supposed to get 100 minutes of physical education time per week. At Maple Elementary, they usually get about 40 minutes, at best, due in part to the school’s over-enrollment problem.

“We have no room, so they have to turn the gym into the cafeteria, and so there is no way that we can work it to where our kids are able to be compliant with that requirement,” Maple Elementary parent Gitane Versakos said.

Constantly having to convert the gym into a cafeteria and then back again is just one symptom of over-enrollment at the south Seattle school. Backed by Maple Elementary’s PTSA, Versakos and fellow Maple parent Bao Ng have been spearheading the effort to win more district support for the problem of over-enrollment for the past two years.

While Maple Elementary doesn’t have the least amount of square feet per child of the over-enrolled schools in south Seattle, it is the only over-enrolled Title I south Seattle elementary school with more than 500 students. According to an October 2017 headcount, in a capacity report released May 1, the kindergarten through fifth-grade school, whose operational capacity the report lists as 468 children, currently holds 532 students, in 53,630 square feet of space. Next year, the school expects a total of 548 students.

Versakos said the open concept layout itself isn’t a problem – she and other parents find value in an open concept – but because the school is overcrowded, the noise level makes the school’s layout problematic. Erected in 1971, Maple Elementary is an open concept school, which means there are no walls separating classrooms. Instead, the school uses bookcases. This means teachers must organize lesson plans around neighboring classrooms, in order to avoid disturbing fellow educators.

And it’s not that the district doesn’t know the school is over capacity. It’s one of many Seattle-area schools that suffer from over-enrollment, according to the October 2017 headcount. So, in 2013, Seattle voters approved an almost $700 million Building Excellence IV (BEX IV) Capital Levy that provided funds for 17 schools to undergo renovation, in addition to funding other school infrastructure-related projects. Among these was Wing Luke Elementary School, whose anticipated size and increased capacity prompted the district to redraw boundaries in the area, in order to admit 100 more students from surrounding schools into the new space.

Though this redraw includes students from Maple, Wing Luke won’t open its doors until the 2020-2021 school year, which still leaves Maple bursting at the seams. To mitigate this issue, 25 kindergarteners who would have matriculated at Maple for the 2019-2020 school year will be sent to neighboring Van Asselt Elementary, instead. Van Asselt is currently under-enrolled by 52 students, and projected to be under-enrolled by 73 students in the 2018-2019 school year. But even if enrollment numbers at Maple Elementary stay at projected 2018-2019 school year numbers in the coming years, if current Maple kindergarteners finish through the fifth grade at Maple Elementary, that still means an over-enrollment of 55 students for those years.

This problem could almost “immediately” be solved, though, according to Flip Herndon, the district’s Associate Superintendent of Operations and Facilities. The reason it remains an issue at the moment is because of the School Board’s expected “grandfathering” option, which allows children who are already attending Maple Elementary to finish out their schooling there through fifth grade. This means that it could take up to six years for the redraws to have the desired effect, Herndon said. Take away the option to stay, he said, and overcrowding would be alleviated. But he said this would also mean a disruption for families and students. As such, he said, given the choice, “most families are going to stay, and you’re not going to have an alleviation of the overcrowding.”

“The only other thing we could do is look at portables, which then takes up more of the play space,” Herndon said, referring to temporary trailers in which classes may be held.

Versakos said she talked with Herndon, and got him to agree to hold a community meeting. She said the purpose of the meeting was supposed to be so Herndon and other district officials could share what the plan was for the school – “how they are going to support us, in terms of these capacity issues.”

The meeting never happened, Versakos said, despite her efforts to nail down a time for Herndon to come out and meet with the school’s parents. Herndon said that, normally, the district holds a community meeting for schools that are going to experience boundary shifts, but doesn’t hold such a meeting for a single school, because a boundary shift impacts more than just one school.

“We are currently looking at scheduling a meeting where we can talk with all the impacted schools on boundaries,” Herndon said. “We don’t have it scheduled yet. … We’d love to have it before the end of June, but I am not sure that’s going to be possible.”

Though she is frustrated, Versakos said she understands the district is trying. In 2017, the district took steps to alleviate at least some of the pressures facing the school, by building four permanent third grade classrooms in a new building separate from the main school. The space has sliding whiteboard walls, which allow the classrooms to be converted to either separate rooms or an open concept layout, mimicking the main building. But the new building erased half the school’s blacktop, taking away a basketball hoop and a tetherball pole, which exacerbated the problem of the school’s already-limited ability to provide its children with enough physical activity.

In addition to the limitations imposed by the gymnasium also functioning as a cafeteria, because of the placement of the third grade building, children currently have even less room to run around outside than they did before – and that is only if they are brought outside to play at all, given that it rains for most of the school year. There is a field abutting the blacktop, but on rainy days, teachers don’t want to let children run around in the mud.

Both Versakos and Ng said this problem could be partially solved by creating a covered space over where the blacktop currently sits.

“It could just … have a covered space, and we could work with that,” Versakos said. “But we simply can’t have P.E. class out in the rain, because children can’t get wet, and spend their day wet.”

The new law includes language that requires schools to indicate to their respective districts if “there is sufficient dedicated gym space and sheltered areas to support the minimum amount of physical activity required of students by law or agency rule.”

Herndon said there are no current plans to create a covered space on the blacktop, or build a larger gym space. However, according to Versakos, Herndon promised “that they would extend and replace our blacktop.”

“The way I heard it … is that, because they took up half of our blacktop, they would replace the part that they removed … and that they don’t yet currently have a date yet to finish,” Versakos said in a follow-up interview. “When I spoke to him on the phone, he said he had to talk to people and to figure out when that would happen.”

Flip acknowledged that “many of our schools don’t have adequately-sized gyms,” and that the concept of what is sometimes called “gymnaterias” or “cafenasiums” – spaces that function as both cafeterias and gymnasiums – aren’t unusual in Seattle’s schools. The challenges of figuring out how to effectively work with the space provided falls on principals’ shoulders, he said.

Ng and Versakos see the new physical education audit law as a positive step that doesn’t go far enough. It is impossible to meet those requirements when the school doesn’t have enough space for everyday learning, Ng said, let alone adequate gym time.

“Whether or not there is an audit, I don’t know that they can be accountable, because of the lack of space,” Ng said.

One thought on “At South Seattle Elementary School, Reduced Gym Time Just One Symptom of Overenrollment”