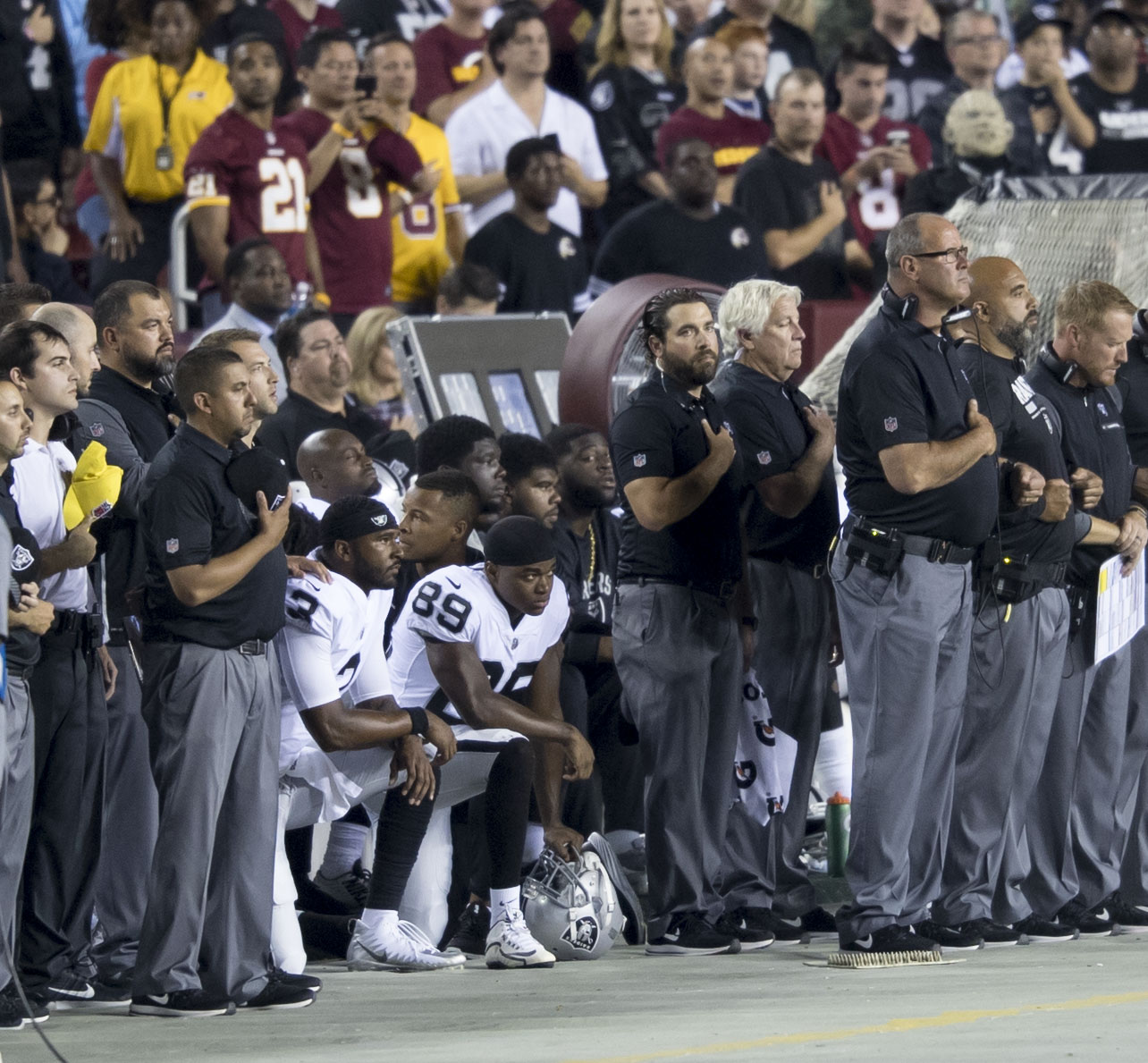 The league’s continued crackdown on protests during the national anthem has left some questioning their fandom.

How fitting for America’s most popular sport to perfectly reflect America itself. Along with being ultra-violent, patriarchal, and fearful of complexity, the National Football League has now officially made the exploitation of black bodies for their entertainment value while muzzling grievances springing from black minds a matter of policy.

Last week the NFL announced it would restrict on-field protest of racial injustice and police brutality by punishing teams with players who demonstrate during the national anthem. It’s an ill-conceived move to appease 53 percent of its fanbase (per a Yahoo Sports/YouGov poll).

The decision was met with instant backlash. The criticism erupted from players, social-justice advocacy groups, and anyone not given to an ahistorical narrative of this country’s past. As ESPN’s Jemele Hill so frankly put it, “The NFL sold out its players with this new, thoughtless national- anthem policy—which it arrogantly believed would not just end the player protests during the national anthem, but also finally move the league into a delightfully neutral, nonpolitical safe space.”

Players must now “show proper respect for the flag” or risk their teams being fined. No more fist-raising or kneeling (because though the historically reverential act of genuflecting was satisfactory for kings and queens, it doesn’t quite pass muster for Old Glory). As a concession, players can stay in the locker rooms, away from the cameras and disapproving fanbase. Out of sight, and out of mind.

How dare they taint my three hours of human carnage on the field with even a second of reality? Go ahead, players, risk your life, mental health, and well-being for my enjoyment, but you better not remind me of the fact those things are risks for black people every hour of every day in America.

Watching the NFL betray the constitutional free-speech rights of its players has been enough to make NFL fans in the black community consider something they once thought inconceivable—giving up the NFL for good.

Thomas, whose team (along with the school’s cheerleaders) was the first high-school squad in the nation to kneel collectively during the national anthem—following the lead of then-San Francisco 49ers quarterback Colin Kaepernick—says the decision is excruciatingly tough, but there’s more at play than just a game. “[Pro] football was the first thing I feel in love with, but I’m not going to watch it again,” says Thomas, who played four years as a cornerback in the NFL. “I just can’t promote it.”

Thomas adds, “Going though the whole pre-draft process for the league, when you’re at the combine, they’re measuring you while you’re on this stage. You can’t help but reflect on how much it resembles a slave market, and that mentality carries to most of the owners in how they feel they can regulate the behavior of the players.”

This appears to extend to Seattle Seahawks billionaire owner Paul Allen—who has been noticeably silent on his stance. The NFL claims the anthem measure had “unanimous” approval—suggesting Allen was in favor of it—but actually adopted the policy without an official vote.

This would seem to coincide with the Seahawks’ decision to part ways with its more outspoken members, including Michael Bennett and Richard Sherman. Adding salt to the wound, Seahawks coach Pete Carroll recently invited Jordan Peterson, the superhero “intellectual” of sexually “repressed” white millennial males everywhere, to speak to the team. The seemingly seismic shift in desired team culture has even diehard Seahawks fans questioning their lifelong allegiances.

For some, the responsibility to change the NFL’s policy doesn’t rest in the players, though, it rests in its fans of color. “We have to stop going to the games,” says Danielle Jackson, a lifelong Seahawks fan. “We have players dealing with concussions and broken bones trying to feed their families. And at the end of the day it’s the white man getting all the money.” Jackson and Thomas agree that a boycott reminiscent of those taken during the civil-rights movement is necessary to alter the league’s course.

Still, completely going cold turkey is a tough ask for some, as sports, in the most romantic sense, create social connections that might otherwise be absent. “My first reaction is heck yeah, we should stop watching the NFL,” says Rainier Beach community organizer Troy Landrum. “But if I’m honest with myself, I could see how a deeply- rooted fan could be like, ‘Well, this is how I connect with my dad or family.’”

But he adds that the time for fence-sitting is over. “This is a moment to really put yourself on either side of the line. You’re either for social justice or you’re not.”

(This article was published jointly with the Seattle Weekly)