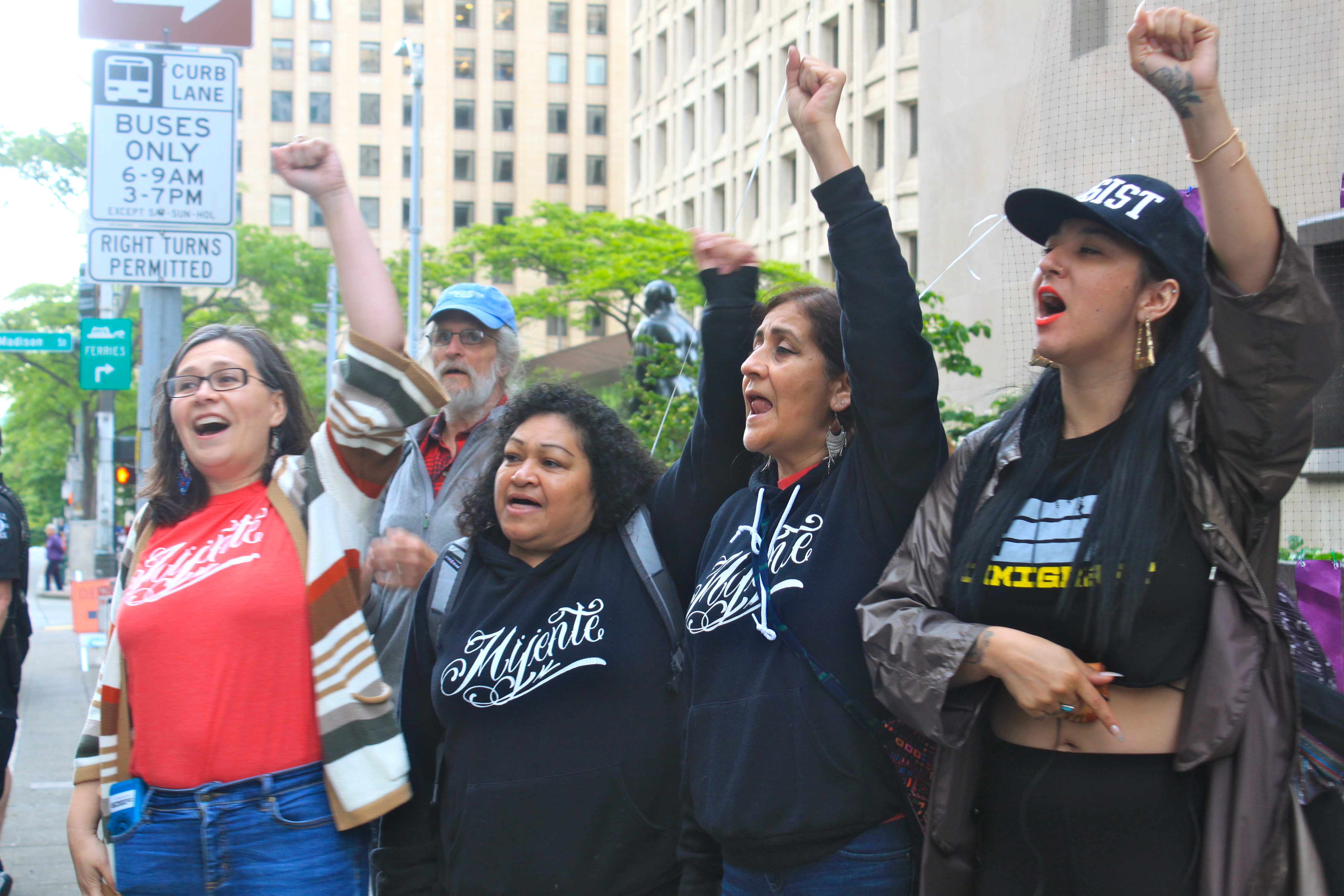 by DJ Martinez (words and photos)

Just over a week ago, a large crowd of supporters turned out to “defend the defender,” immigration advocate Maru Mora-Villalpando, in front of downtown Seattle’s Immigration Court on Second Ave, the “epicenter for the deportation pipeline in Washington State” said Mora-Villalpando.

There, she spoke about the details of her case, and invited everyone to her second deportation hearing, which was initially scheduled that day, only to be rescheduled for June 26. She also announced the launch of Chinga La Migra, a multi-city organizing tour and web docu-series organized by Mijente, which kicked off in Tacoma on Monday, June 4, with a noise demonstration at the Northwest Detention Center – a privately run immigration prison located in Tacoma -and site of over a dozen hunger strikes in the last three years.

There, members of the Northwest Detention Center Resistance and Mijente along with families and friends of those detained and recently deported Immigrants came to speak about their experiences, as well as highlight the facility’s current conditions. 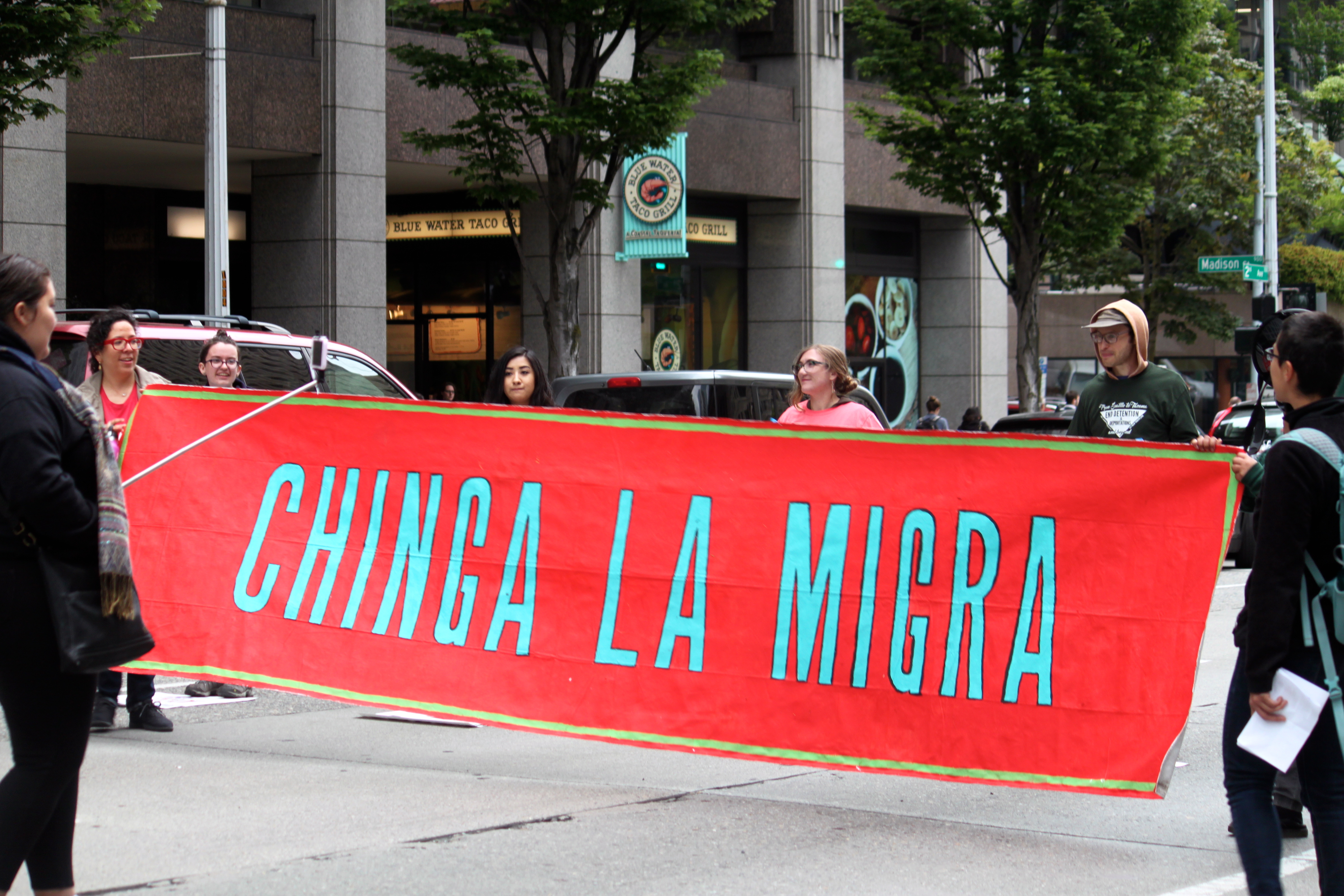 The first person to speak was immigration and reproduction rights activist, and Mijente member, Alejandra Pablos. Pablos was recently released from the Eloy Detention Center in Arizona, after spending more than 40 days in detention. “It’s really important right now that we’re collaborating and we’re learning from each other, but most importantly, we’re showing that we’re really not scared. Showing that we’re resisting. [ICE] is now obviously Trump’s personal police force that’s enacting his White supremacist agenda, and we’re gonna fight back, we’re not gonna be silenced. We’re gonna organize better, we’re gonna be stronger, and we’re gonna kick some ass.”

Another speaker was ShaCorrie Tunkara, whose husband, Saja Tunkara, is currently being detained inside the Northwest Detention Center. Tunkara has tumors growing in his neck and had removal surgery scheduled last January, but was detained by ICE, which delayed his surgery until April. The NWDC Resistance received calls from the inside saying “there’s a guy with tumors on his neck that we can see, he shouldn’t be here, he should in a hospital.” 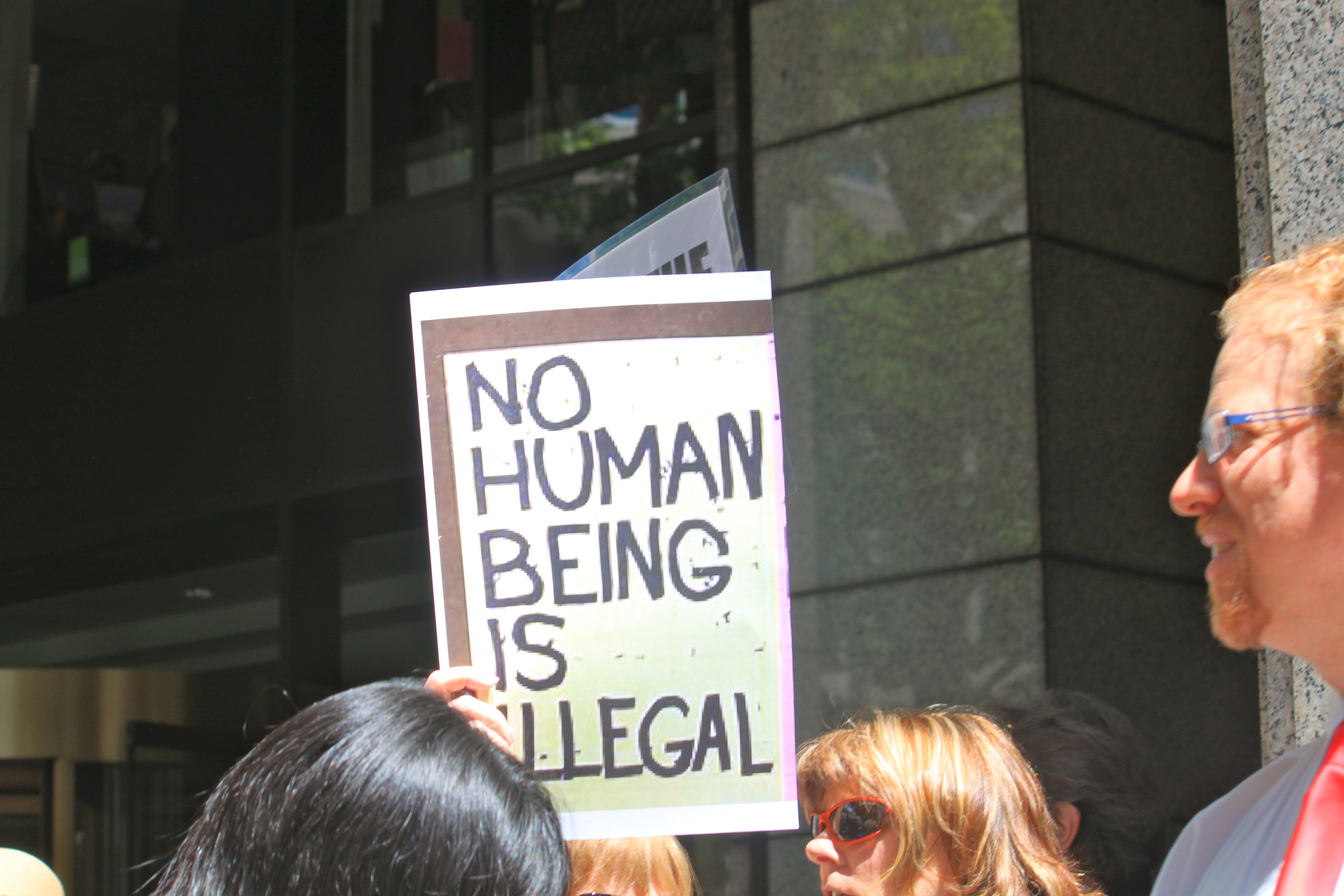 ShaCorrie Tunkara spoke about the disregard for life and callousness of the ICE officers. “They’re cold-blooded. They’re cold-hearted. I don’t really see how these people sleep at night. I really really don’t. But, that’s beside the point right now. My goal is to get my husband released. I don’t really care about his legal situation. To them, they see him as an immigrant or an animal. When I met him 10 years ago, I didn’t care about his legal situation. I fell in love with him. I didn’t say, ‘Hey you have a green card? You got citizenship?’ No one cares about that when they fall in love with someone.” Tunkara says because the surgery was delayed for so long, the tumors grew and only one was removed.

“I didn’t even know he had multiple tumors until after the surgery,” she said. Saja Tunkara’s nerves were damaged on the right side of his neck, and now has limited mobility in his right arm. “He can’t put on pants by himself, he can’t shower by himself, he can’t put on his clothes or even talk on the phone for a long period of time to talk to me and the children.” ShaCorrie Tunkara said. She thanked Mora-Villalpando and those in attendance “I’m amazed by this group of people. I didn’t know that it existed. And just like all of you are fighting, I’m fighting too. Even after my husband is released, I will continue to fight. Because these people have no idea what they’re doing. Not a clue. I’m not gonna rest until he’s out of here.”

“There’s a lesson to learn from this horrible story that hasn’t concluded yet.” Said Mora-Villalpando. “There are people out there that care about ShaCorrie, who reached us and said, ‘This shouldn’t be happening.’ This is the community protecting themselves. That’s what it should be. But it’s happening inside too. People are resisting by protecting themselves. Regardless of being detained, people are caring for each other. They’re showing us a lesson. If inside, detained in the worst conditions ever, they’re caring for each other and protecting each other, why aren’t we doing that?” A fundraiser for the Tunkara family can be found here. 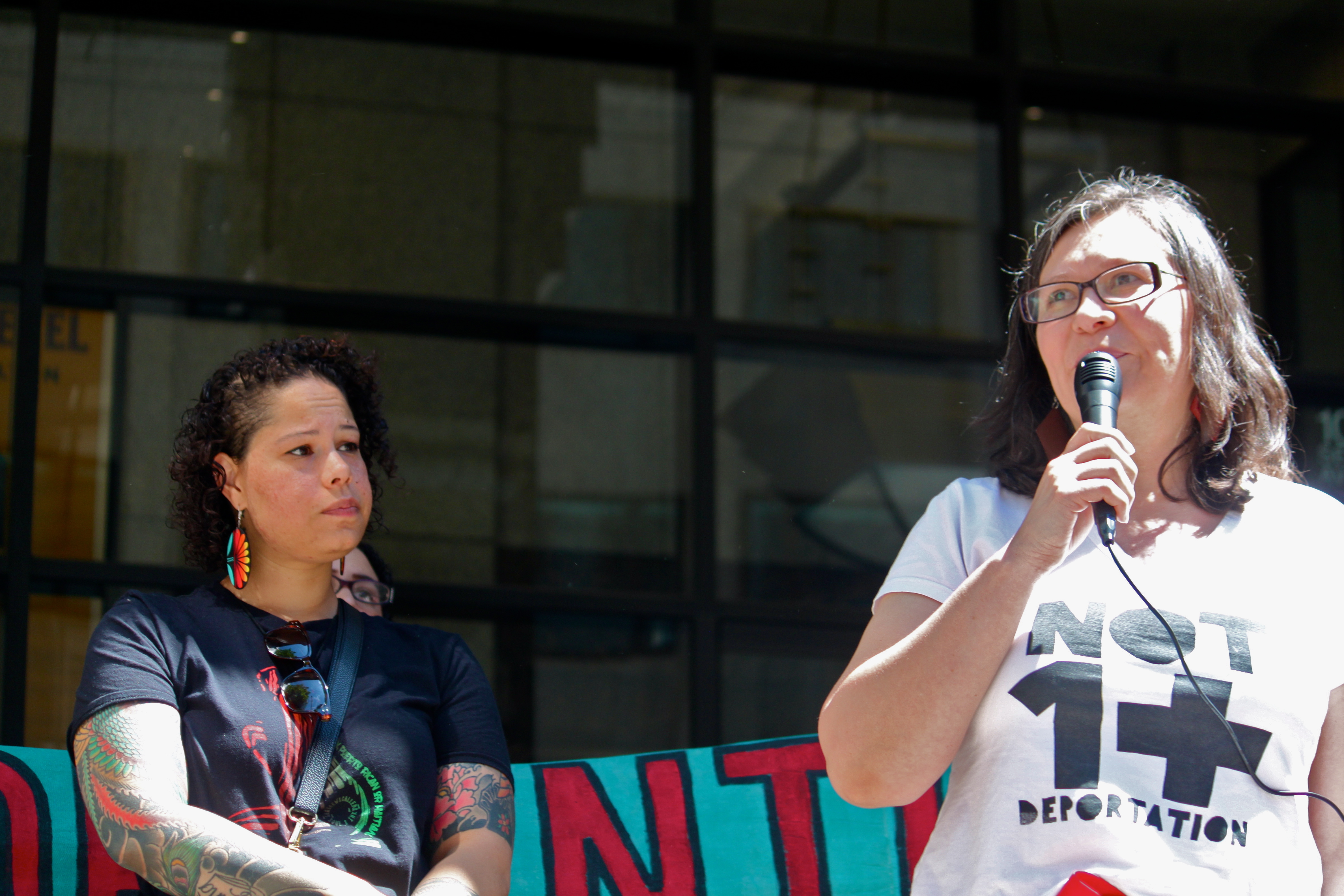 Folks showed up to the sundown action with pots, pans, whistles, jaranas and other instruments, to take part of a noise demonstration, which lets those being detained inside the detention center know that they are not alone, that there are people outside who care about them. Rancheras, Banda and Hip Hop blared from a speaker, and a projector was set up that projected the words “Chinga La Migra” and “Abolish ICE” directly onto the detention center.

The touring protest continued onto its second day early in the morning on Tuesday, June 5 in Seattle. Activists returned to the building at 1000 2nd Ave in Downtown. There, they chained themselves together blocking morning traffic, calling attention to ICE’s presence in our city, and demanding that billionaire developer Martin Selig, “stop renting office space to trump’s deportation forces.”

Nine activists (later known as the Anti-ICE 9) were cut out of their lock boxes and arrested by the Seattle Police Department. “We wanted people to know that this (building) is the epicenter of deportations in our state. That this building is a privately owned building, and they could evict the entire ICE agency that is here; border patrol, homeland security investigations, the courts–  all the decisions are made here, and this building definitely should kick them out so there’s no place in Seattle or Washington State that rents to these people who destroy communities. We want to remind people that SPD actually does collaborate with this agency, we know that they’ve been working with homeland security investigations, and they should be held accountable right now. ICE will be abolished. This is 15 years of having them in our lives, it’s time to end.” Mora-Villalpando told me in Spanish and English. 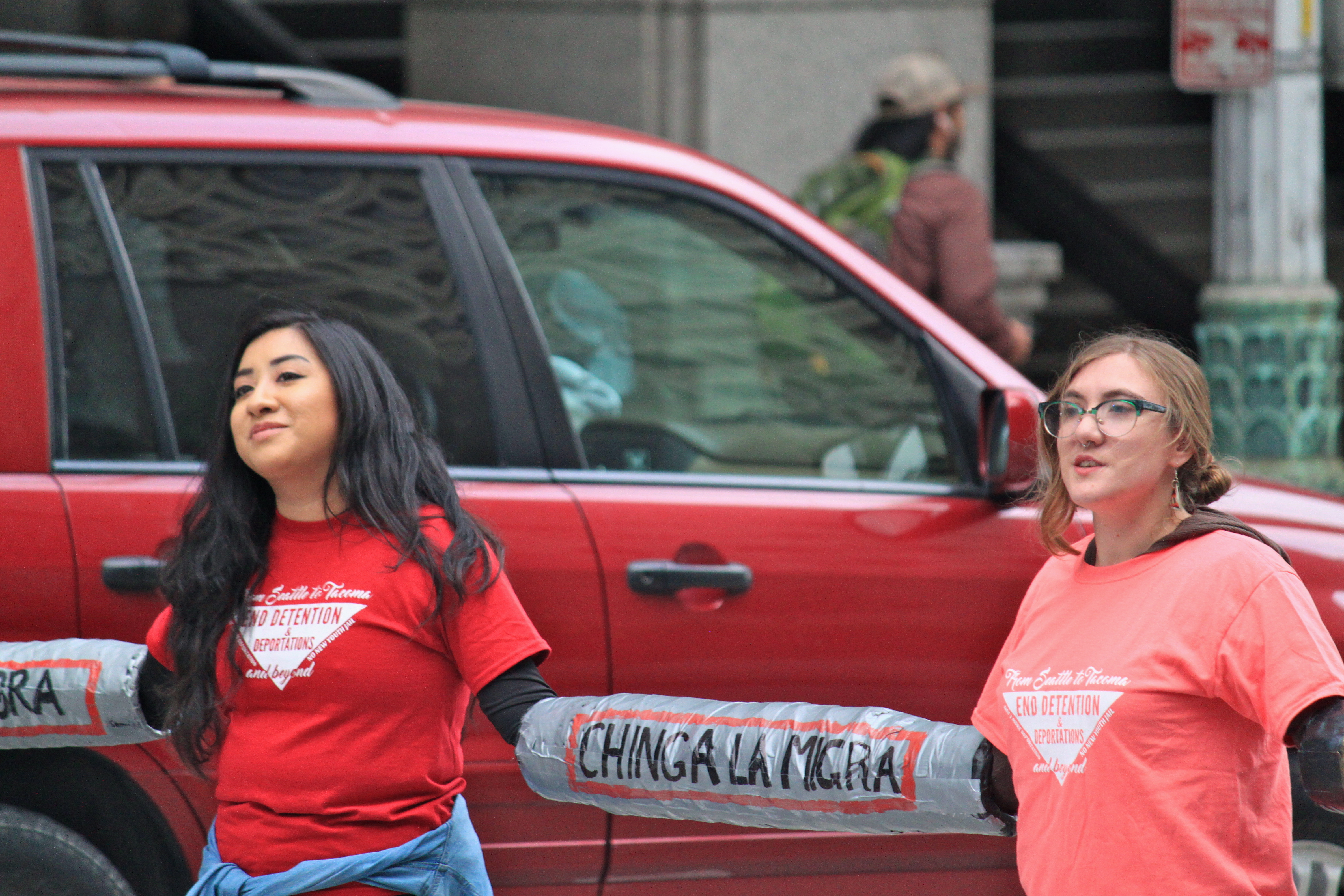 Once SPD had made arrests and cleared the streets, the protest moved directly to the King County Jail. Protesters continued to chant “Chinga la Migra” and a karaoke rig was set up, allowing activists to sing their favorite songs as they waited for their comrades to be released from jail. Another reminder that “no estan solos” or, “they are not alone.” By 6pm the Anti-ICE 9 were all released without bail. 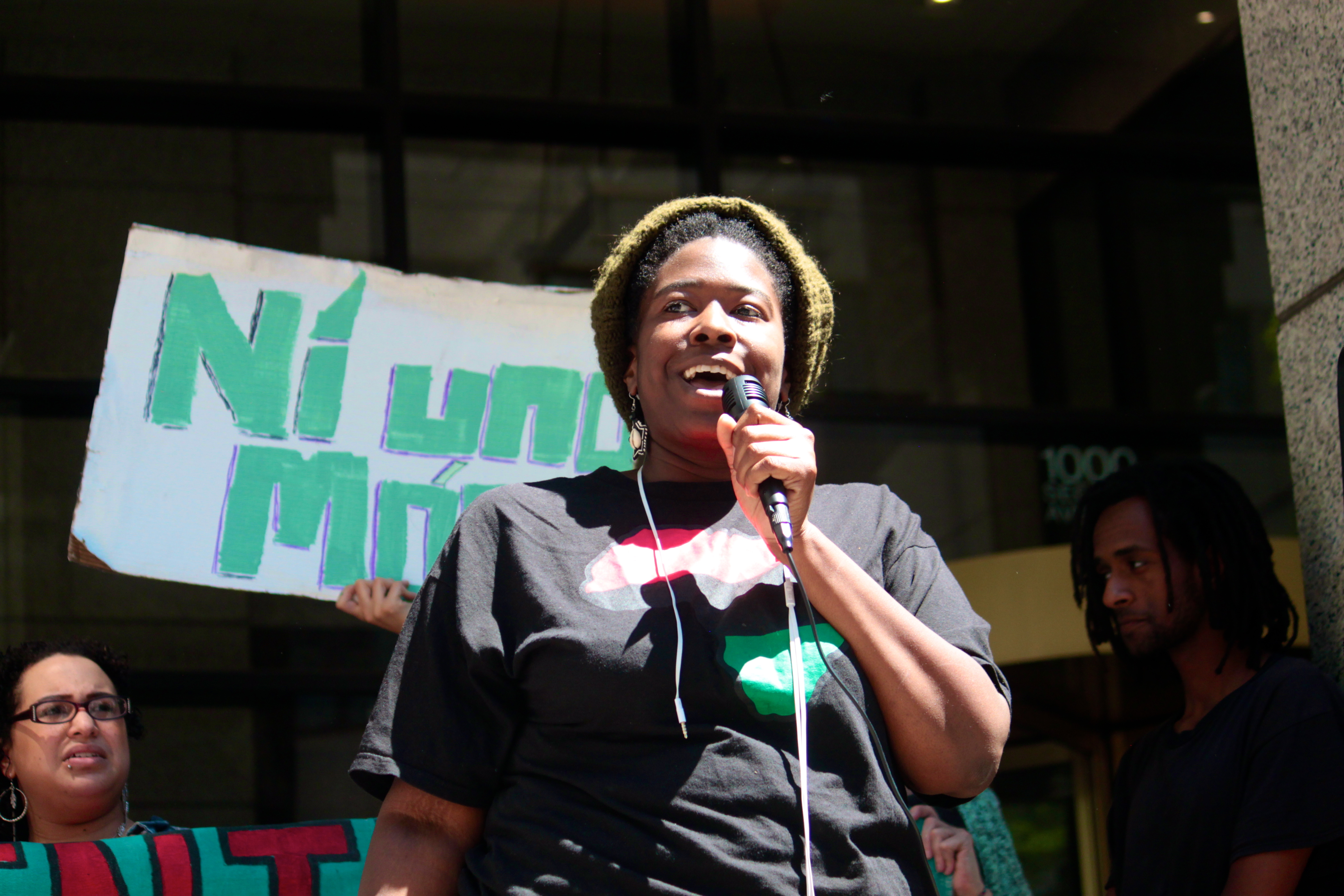 This tour comes on the heels of weeks riddled with horrifying immigration stories from around the country. Last month, Claudia Patricia Gómez González was shot in the head and killed by a border patrol agent in Rio Bravo, Texas, shortly after her arrival from a 1,500+ mile journey from Guatemala, seeking work. Around the same time, Roxanna Hernández, a transgender woman from Honduras, died in ICE detention in New Mexico, from what’s being reported as complications related to her HIV status after being detained for 5 days in what is known as an “ICE box” — a facility that is notorious for it’s freezing conditions, after seeking refuge.

A month before both these incidents, Attorney General Jeff Sessions announced a “zero tolerance” policy for those crossing the border illegally. Last month, he said the Department of Homeland Security was referring 100 percent of those folks for criminal prosecution in federal court, causing families to be separated and thrown into a disorganized system. The “hidden horrors” of Operation Streamline, as it’s known by the Department of Homeland Security, was reported on earlier this week.

All cities in King County are supposed to be what is known as “sanctuary cities.” A sanctuary city is supposed to protect those without documents for whatever reason by not collaborating with ICE, freeing it’s citizens of fear from being deported. In February this year, Washington Governor Jay Inslee spoke against state troopers and local police in Tukwila acting as “mini-immigration agencies” after Chavez Corona was rear-ended by another car on I-5 and had ICE called on him by a state trooper after reporting the accident.

That same month, it was discovered that the Washington Department of Licensing (also located Downtown near the targeted ICE building on 2nd.) was regularly releasing driver information to ICE authorities, again prompting Gov. Inslee to remind officials of the cities sanctuary state status. And, in February, the top attorney for ICE in Seattle pleaded guilty to 2 felony charges for wire fraud and aggravated identity theft. Sanchez admitted to using ICE databases to steal the personal information of immigrants with pending federal cases. 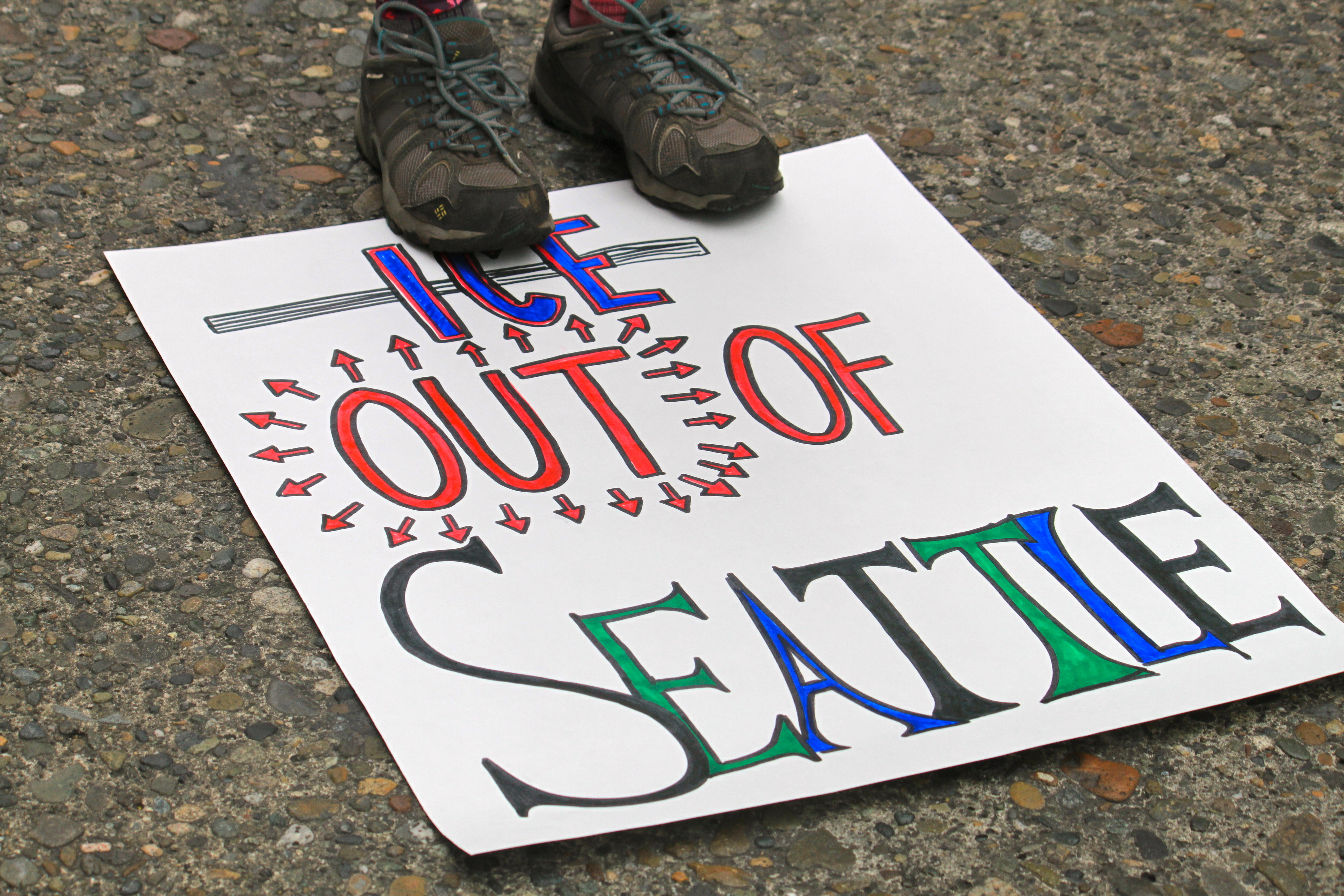 On Thursday, The Northwest Immigrant Rights Project reported that up to 120 people being held at SeaTac prison in Seattle are asylum seekers who are separated from their children. The NWDC Resistance will be holding a protest at the SeaTac Federal Prison, Saturday, June 9th at 1:30pm.

Amongst all this, we need to support groups like the Northwest Detention Center Resistance and Mijente. We need to uplift our activists and find ways to plug in to protect our families, friends, and neighbors. We need to ask ourselves hard questions and have the strength to answer them with honesty, integrity, and dignity. El pueblo unido jamás será vencido. The people united will never be defeated.

2 thoughts on “Can Seattle Really Call Itself a Sanctuary City?”