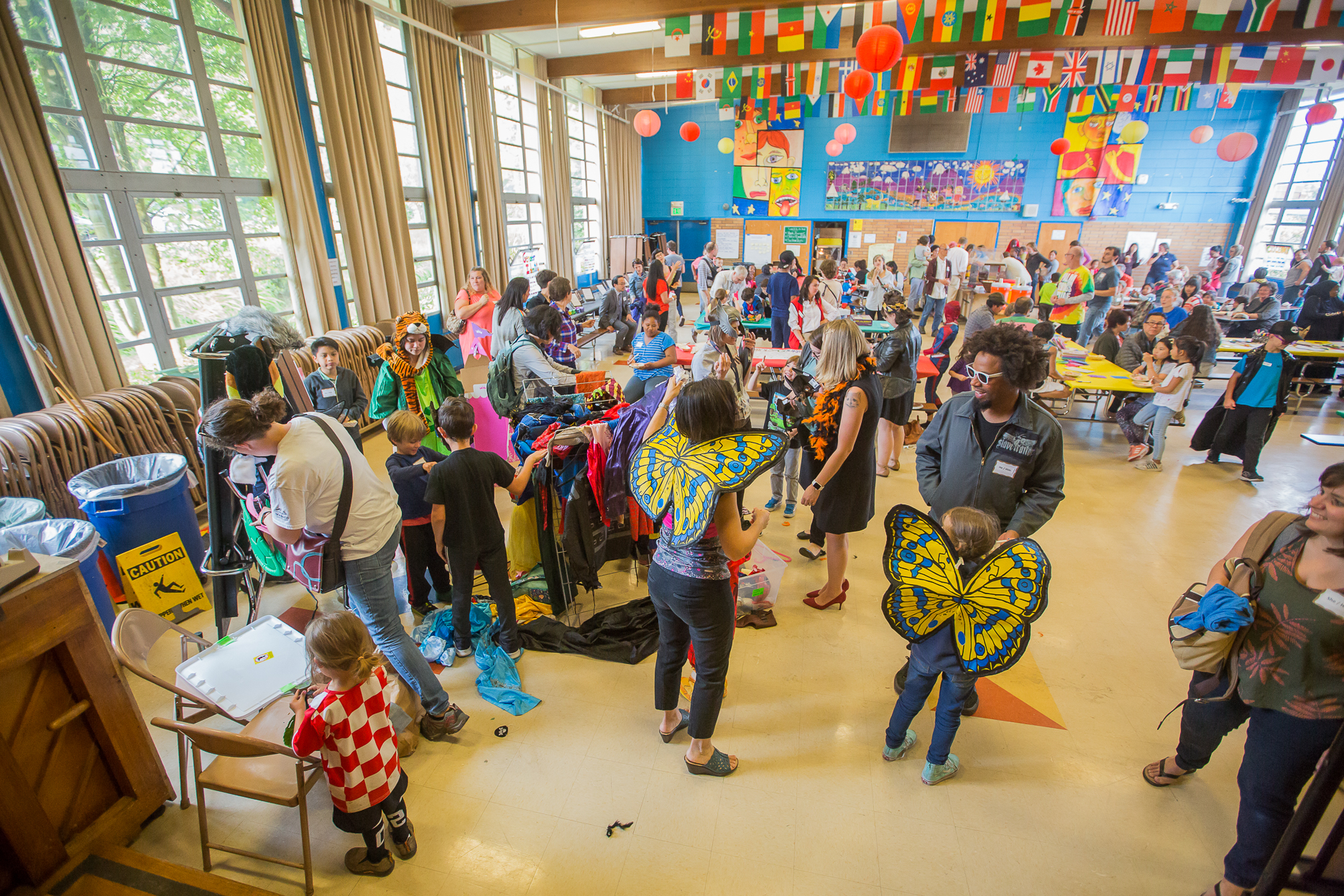 One day, Marian Fink hopes there won’t be a need for special events to teach children that families aren’t just made up of a man and a woman. In the meantime, though, “it’s important to know that we value everyone, and everyone matters, in our community.”

Fink is the technology specialist at Graham Hill Elementary School in Seattle. While she came out to her family when she was 21 years old, and her colleagues know she has a wife, she said she didn’t realize how important it was to talk with her students about being queer, until she was pregnant with her first child.

“I thought, ‘Oh, my gosh. Here I am. I’m going to have a child in, like, three months, or four months … and I haven’t even told my class.’ And what was I doing to this child? I was setting them up already in this fearful way,” Fink recalled.

This is why, three years ago, Fink, in a group of Graham Hill Elementary parents and educators, created the Love Makes A Family ice cream social event, in which children may learn about queer families. The social, which took place this year Thursday, June 7, featured not only ice cream, but arts and crafts that encouraged children to voice who they are both inside and out. There was also a photo booth, where families could dress up and take pictures together.

Raised in a conservative, Southern Baptist family in Texas, Graham parent Morgan Wells knows all too well the importance of normalizing the LGBTQ+ community. Wells, who was part of the event planning committee, said that, growing up, she was forced to date people in secret, while attending public school in Houston, Texas.

“Nobody was out. It wasn’t safe,” Wells said. “There was that occasional gossip that a teacher might be gay, but it was always shrouded in a lot of jokes and … that was the time the word ‘gay’ was used a lot as an insult. There was no visibility for anything positive, or even just normalizing.”

Even though society has progressed, in terms of accepting LGBTQ+ people and families, that doesn’t mean it’s not still a struggle. When the event started three years ago, Wells remembered, the University of Massachusetts LGBTQ+-focused photo project, whose name Love Makes A Family helped to inspire the evening, was the focus of the night. This made some parents uncomfortable, because they believed the school was teaching their children against their own religious beliefs, Wells said. And she gets it, she said. After all, she grew up in a very conservative family. But it was not a straightforward fix, she said because many of the parents who were uncomfortable were immigrants, whose backgrounds and experiences the school also needed to make sure to honor.

“That was a hard thing for [the then-principal Walter Chen] to walk through, because these were people who could have easily been marginalized or brushed off, so it was important for us to be responsive, and be in conversation with them, and sit down, and talk,” Wells said.

Following several meetings to understand where the parents were coming from, Wells said, the school decided to instead include photos of LGBTQ+ families in the community, in order to put a face on the community.

“I hope that it helps to normalize things, when people see that we’re just, like, late to drop-off, too, or whatever,” Wells said. “We’re running late, we forgot our lunch – we just did all the same things, and we are sharing this experience.”

Fink was one of the first to include her family in the photo exhibit. It’s harder to be prejudiced against people one knows, she said, especially when you see someone as a friend, and, in Fink’s case, “just as invested in your child as you are.”

“You realize that these are real people, and you actually want a relationship with these people,” Fink said. “I think [the event] localized it, which is what we continue to strive to do – we are all part of the community together.”

Fink believes it’s important for the children, too, to learn that “hate language is hate language,” even if they don’t fully understand what they are saying, Fink said. When she overhears children using the word “gay” as a slur, she takes them aside and frames the issue in a personal way.

“They know that I matter, and so we can … build that kind of thing. They can question the beliefs of their family, and whether or not theirs are aligned with those or not,” Fink said. “I think just exposing those pieces are important when they happen, rather than just brushing comments like that aside … and just chalking them up to schoolyard talk or something.”

She also wants to be “a model for kids and for students on how to live your truth” – even within her own family.

“I need my kids witnessing that there is no shame in who we are as a family, and so finding a community, and creating … a community that we want and value is really important, and totally worth all the work that it takes,” Fink said.