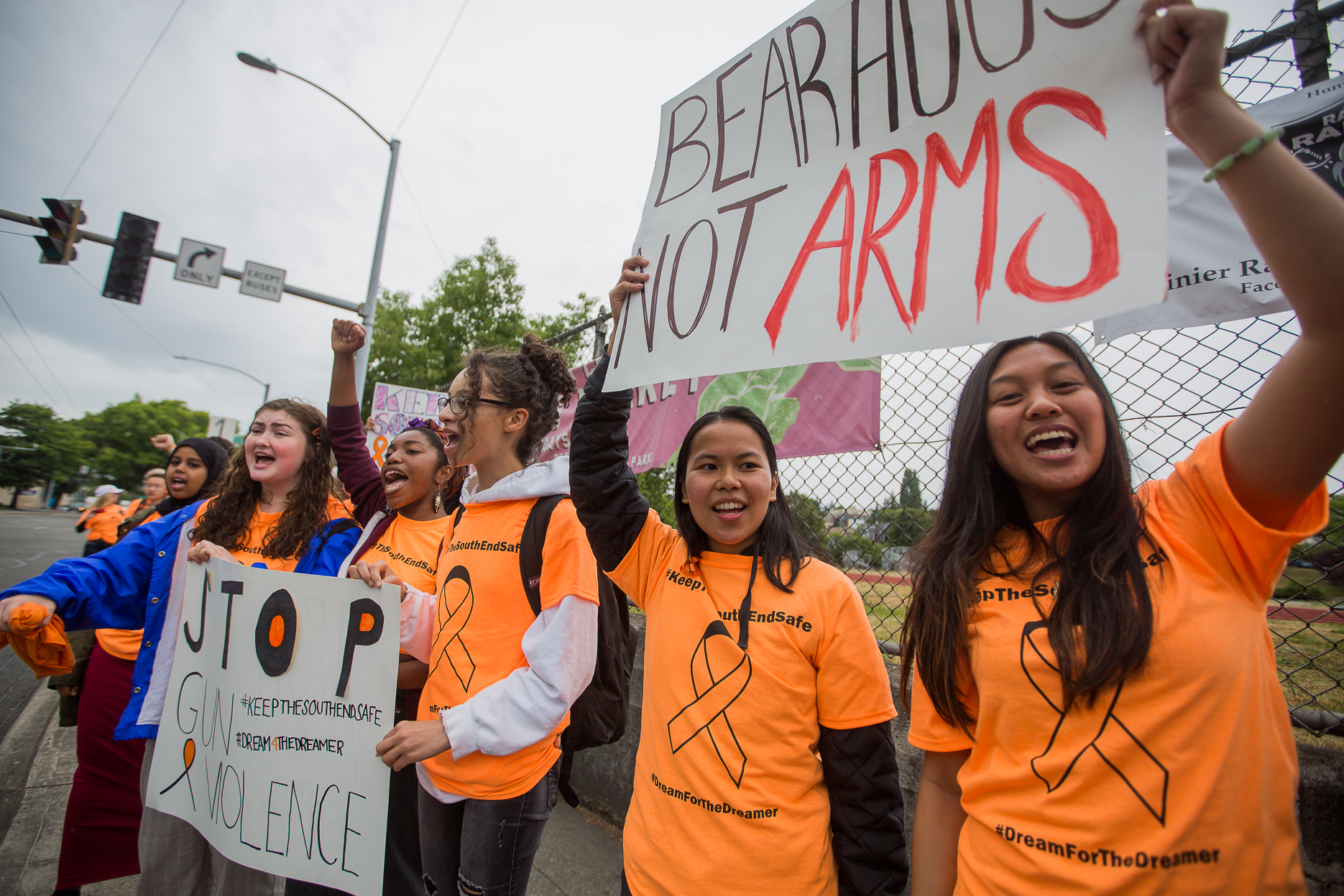 by Carolyn Bick (words and photos)

A week after Ryan Dela Cruz was shot dead in Martha Washington Park, his schoolmates gathered under the slate grey sky outside Seattle’s Franklin High School to protest the violence that killed him.

The protest, organized by Franklin High School students in just a few days, took the place of Quaker Day, a Friday normally meant for fun and games to celebrate the school’s 300 or so outgoing seniors. Dela Cruz would have graduated alongside them on June 18, but was killed in what police say was an unprovoked shooting, while ghost hunting in the park in the early hours of June 2.

Of the school’s 1,276 students, about 1,100 lined up along the sidewalk of Rainier Avenue South, as well as the bridge overlooking the road, holding signs and alternating between chants and periods of silence. Almost of them wore neon orange shirts emblazoned with the hashtag, ‘#KeepTheSouthEndSafe,’ a nod to the feelings of students, educators, and even some of the City’s violence prevention personnel that gun violence disproportionately affects youth in the South End.

While Dela Cruz wasn’t her close friend, senior Amiliiun Williams said all the outgoing seniors know each other, and that news of Dela Cruz’s death deeply affected all of them.

“This is unbelievable. There’s just too many kids that get hurt – not just with gun violence, but with violence in general,” Williams said. “This just shows how much we are willing to do for just one student, you know? We are really a community, and we want to come together to support the issues at hand.”

Williams said she thinks the South End needs a greater police presence, but acknowledged that police “are part of the cause, as well,” and believes police should receive better and different training, with regards to managing their approach to these issues. She said she also wants to see resources within the community that focus on how to protect not only the area’s youth, but everyone.

Dela Cruz’s death and the ensuing student response galvanized something within Williams, too. She doesn’t want what happened to Dela Cruz to happen again – not only to other people, but also to herself.

“I’m afraid, personally, to end up dying by gun violence … I really feel like it’s my responsibility to come out here and help raise awareness and use my voice, in whatever way I can,” Williams said.

Junior Annie Vo said she is also afraid she will be killed by gun violence. After hearing what happened to Dela Cruz, Vo said she was in a state of disbelief.

“I always knew this kind of stuff happened, but it never felt so close – like, it never happened to me, until now,” Vo said. “I’ve always felt like change needed to happen, but I’ve always been like barking and no biting. But now … this is triggering something bigger. I need to do something. Change needs to happen.”

Principal Jennifer Wiley said the students have embarked on a data mining project, to try to collect information on the number of teenage gun deaths citywide. While she doesn’t know what the outcome of that project will be, Wiley said she is proud of the students. The protest was optional, she said, so there was no way to “cajole their buy-in.”

“They voted with their feet and their hearts,” she said.