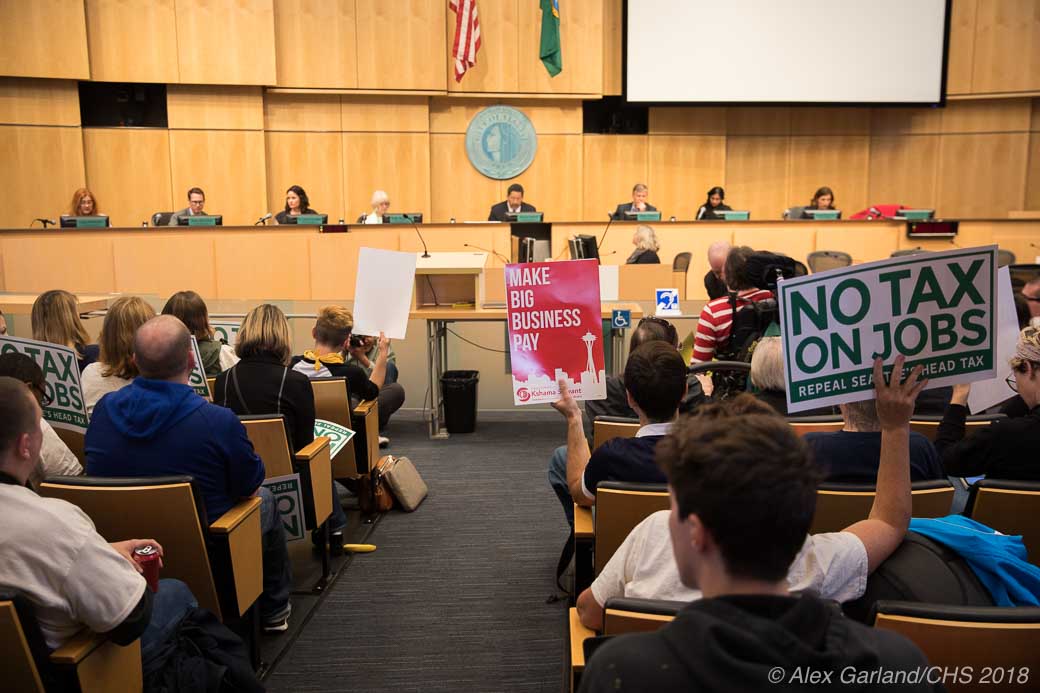 In a vote interrupted by a chanting crowd and District 3 representative Kshama Sawant’s refusal to voice her yay or nay despite threats from President Bruce Harrell that he would close council chambers if outbursts continued, the Seattle City Council voted 7-2 Tuesday to repeal the city’s yet-to-be-implemented, unanimously-passed head tax on Seattle’s largest businesses.

As she seemingly goaded on her supporters in the council chambers, Sawant paused and let the chants swell before finally casting her vote against the repeal.

Earlier, with a sigh, council member Lisa Herbold, a co-sponsor of the head tax bill, said before her vote to repeal the measure, “This is not a winnable battle.” The opposition, she said, has “unlimited resources.”

Mike O’Brien said the employee hour tax makes the most sense for the revenue Seattle needs but he was forced to vote to repeal the tax because he could not “see a path.”

Another council member who flipped from her previous support for the head tax, Lorena González said “nobody wants to talk about how we pay” for homelessness solutions. Like O’Brien, she said she still believes the employee hours tax is a viable policy for Seattle. “It gives me no pleasure to have to replace this law because this law was well done.”

“It is a defining moment in the city of Seattle,” Gonzalez said, “and it is not a good one.”

Sawant focused her more than 20-minute-long pre-vote comments on the thousands of homeless and unsheltered in Seattle, national movements toward more progressive tax structures — and the Democratic party. “They have let it worsen with no real solutions,” the Socialist Alternative leader said. She also scolded her fellow council members for giving up on swaying the public opinion of “working people” like those who supported the “No Tax on Jobs” campaign. All it would take is a summer of activism and reaching out to the working class, Sawant said. The District 3 representative said “a tsunami of propaganda from big business” was driving Tuesday’s repeal vote. “This is a cowardly betrayal of the needs of working people.”

Teresa Mosqueda, who co-sponsored the head tax legislation with Herbold and joined Sawant in voting against the repeal Tuesday, called Amazon’s actions during the initial negotiations to shape the head tax a “hollow handshake” and repeated her call for a replacement plan before repealing the tax but said she was afraid that what will come next will be “more regressive tax structures.” “I don’t think this was about one corporation. I think this is about shared responsibility,” Mosqueda said.

“I’m absolutely ready to start on Plan B,” she said.

(this article was previously published on Capitol Hill Seattle)